Improving economics and govt actions increase probability of ratings upgrade
We assign a high likelihood of a sovereign ratings upgrade for India as most macro indicators have exhibited improvements in past 2 years. A rating upgrade will likely entail multi-layered benefits for Indian economy and markets. Over the past decade we have witnessed 4 instances of rating upgrades by S&P and Moody’s and on an average Sensex has returned 9% in the following 6 months and 40% in the following 12 months of ratings upgrade. Boost to capital inflows and improved perception of India on the back of rating upgrade should help moderate volatility associated with US rate normalization and create some headroom for RBI to ease monetary stance.

India likely to remain one of the favored emerging markets
Expectations of normalization by the US Fed and a subdued commodity pricing environment will continue to drive multi-asset differentiation within Emerging markets. India's embrace of long pending, supply side reforms together with an investment driven macroeconomic stabilization will allow it to deepen its relative attractiveness in 2015. Among key EMs, India has demonstrated one of the best improvements on external front with CA deficit now in comfort zone at (2.1% in Sep’14 qtr. 4.7% in FY13), appreciable FX reserves accumulation and sharp uptick in capital inflows.

Government must ensure its economic agenda is not side tracked
While the urgency in moving ahead on key ordinances is indicative of the commitment to reform, passing bills in parliament will be vital to ensure that reform is structural, enduring and getting institutionalized. Translation of many of the recent ordinances into law in the next session of parliament will be viewed as crucial determinants of the government’s execution prowess. Other risks: Faster- and steeper-than-anticipated Fed rate normalization and any systemic risk associated with steep decline in oil prices.

There are few countries that benefit more from weak oil prices than India so the recent energy market moves represent something of a windfall for Narendra Modi’s government.  This might yet allow the RBI to cut interest rates but the broader question is over how bold the administration will be in its legislative agenda. A great deal of enthusiasm has already been priced into the market and it will be interesting to see how much is delivered upon this year.

With a large young upwardly mobile population India represents a fertile market for global Autonomies, a number of which maintain listed subsidiaries on the Munbai exchange. Many of these trade on aggressive multiples not least because supply is reasonably thin. 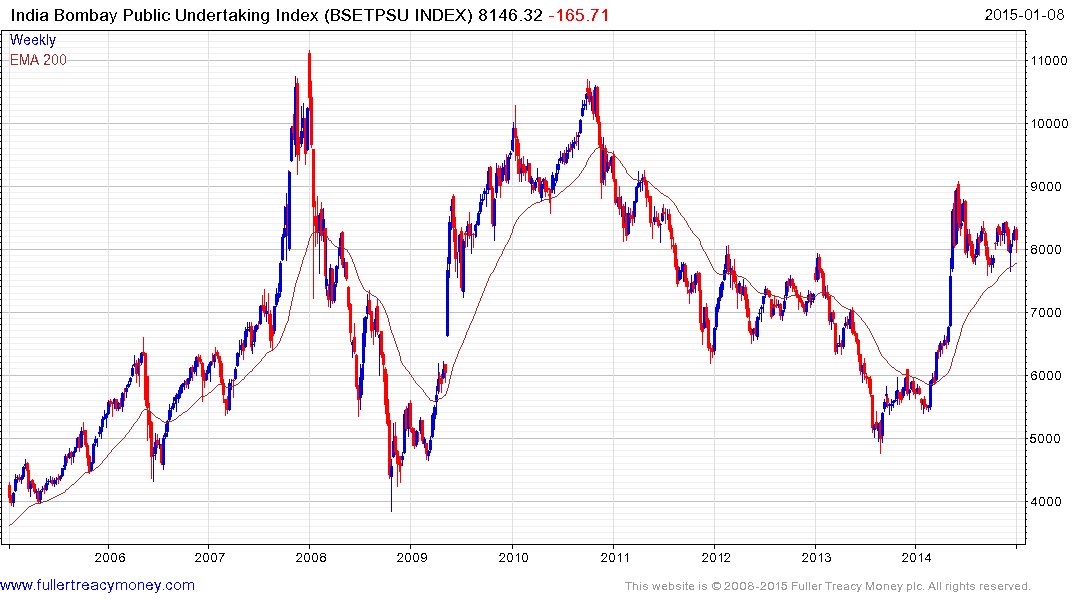 The list of tasks facing the majority BJP government include clamping down on corruption, streamlining the planning process, opening up protected sectors and rationalising state run enterprise. The bullish case for the Bombay Public Undertakings Index (P/E 11.5, DY 3.04%) rests on some of these objectives being achieved since it is comprised of major state run companies. It had returned to test the 2008 lows by August 2013 and broke back above the 200-day MA in March. The Index has been consolidating its surge since June and found support in December in the region of the 200-day MA. A sustained move below the trend mean would be required to question medium-term upside potential. 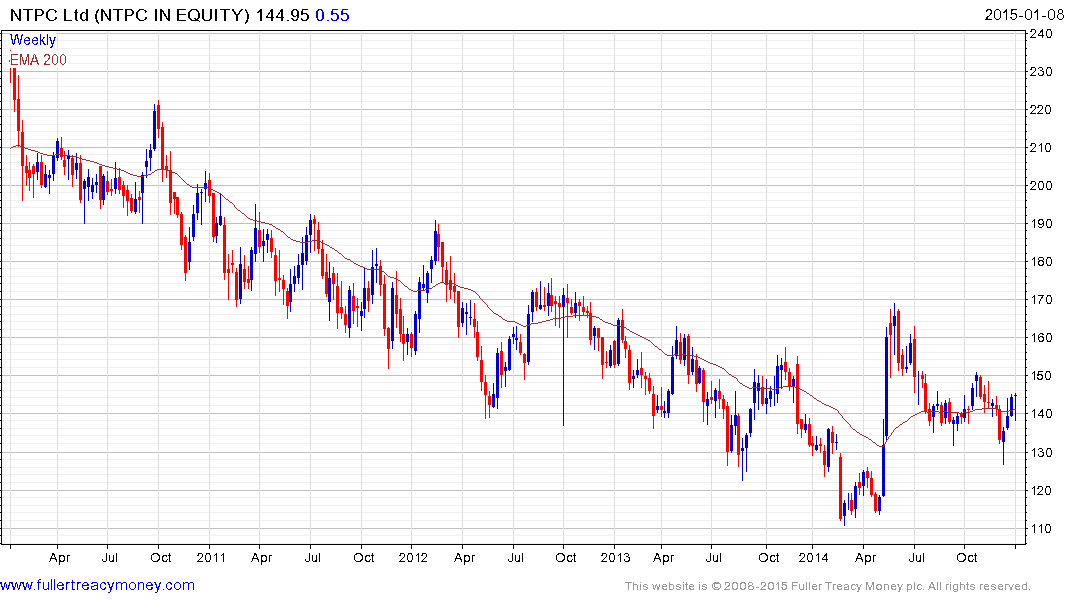 The Index has a number of oil and coal companies among its largest constituents which has weighed on performance. However, if one looks a little deeper the utility sector is turning to outperformance. NTPC rallied to break a four year downtrend in May and found support in December above the INR120 area. A sustained move below that level would be required to question medium-term recovery potential. Unfortunately NTPC is not listed outside India. 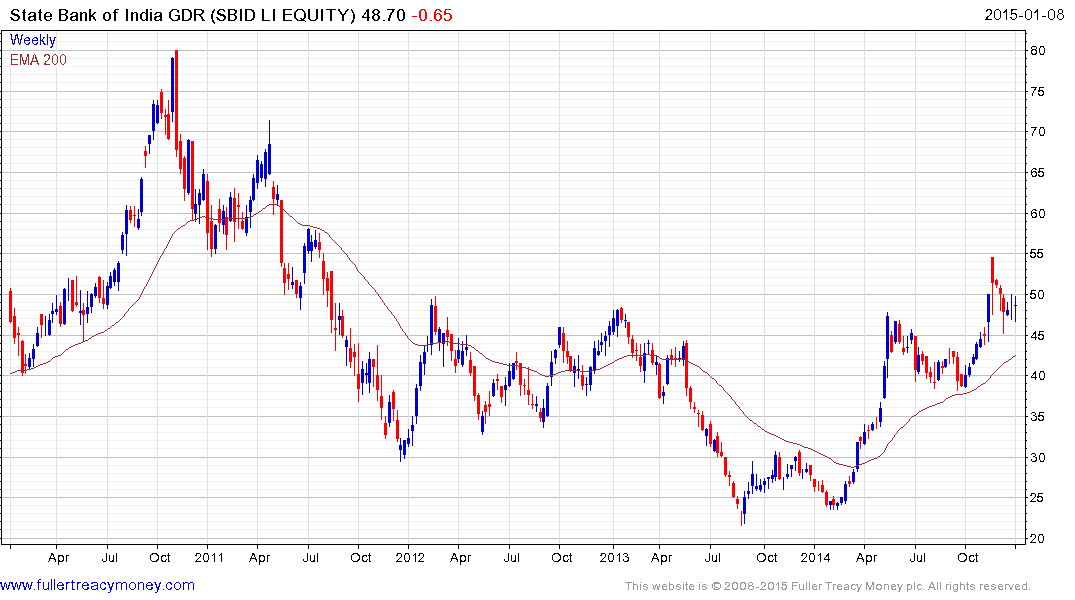 State Bank of India is the third largest company in the sector and has a London listed GDR. The share found support in the region of the 200-day MA from September and paused in December in the region of $45. A sustained move below that level would be required to begin to question medium-term scope for additional upside.