A market optimist might brush off Friday’s massive liquidation as a one-off event — a huge stumble by a fabled player now in decline. But this is no time to be optimistic. Hwang is representative of, not distinct from, the rest of the hedge fund crowd. His bets are also their bets. He may have gotten margin calls faster because he was more leveraged. But his positioning is by no means unique — and that commonality is where trouble may lie.

Take the trades involved. Media companies such as ViacomCBS and Discovery have net exposures that are the “highest level we have seen since 2016,” according to a recent note from the prime brokerage unit at Morgan Stanley, which, alongside Goldman, managed some of the block trades on Friday. Last week, when ViacomCBS was using the steep run-up in its stock to sell new shares and bolster its balance sheet, the pressure on leveraged hedge funds must have been intense.

Rising yields and companies selling additional shares at rich valuations puts pressure on leveraged trades. It was inevitable that the rotation out of stay-at-home champions, who saw a one-time boost to business, would see a reality check in 2021. Last week’s block trades were an example of that. 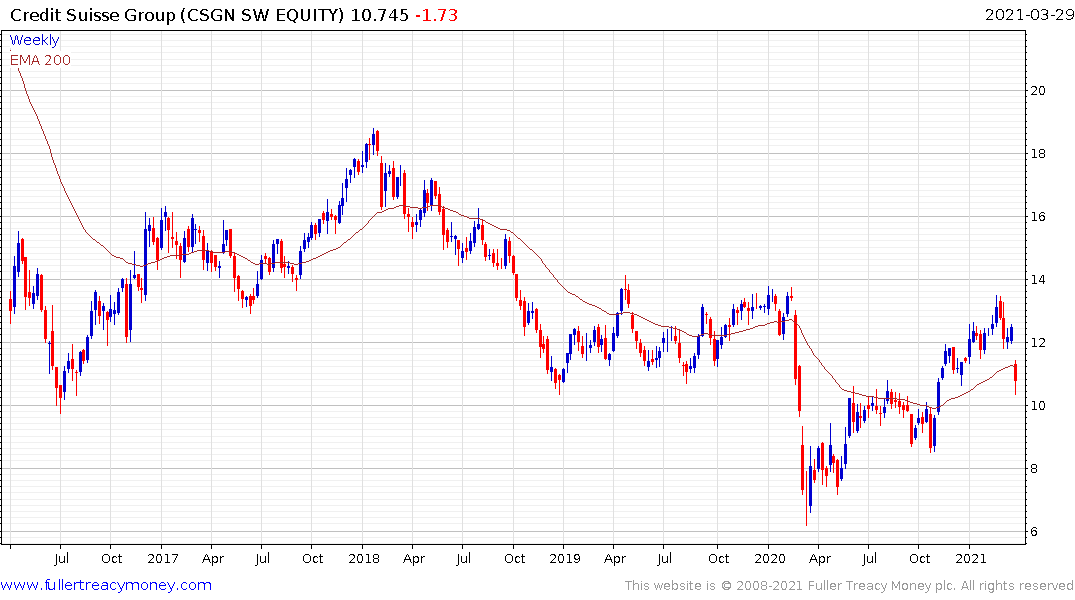 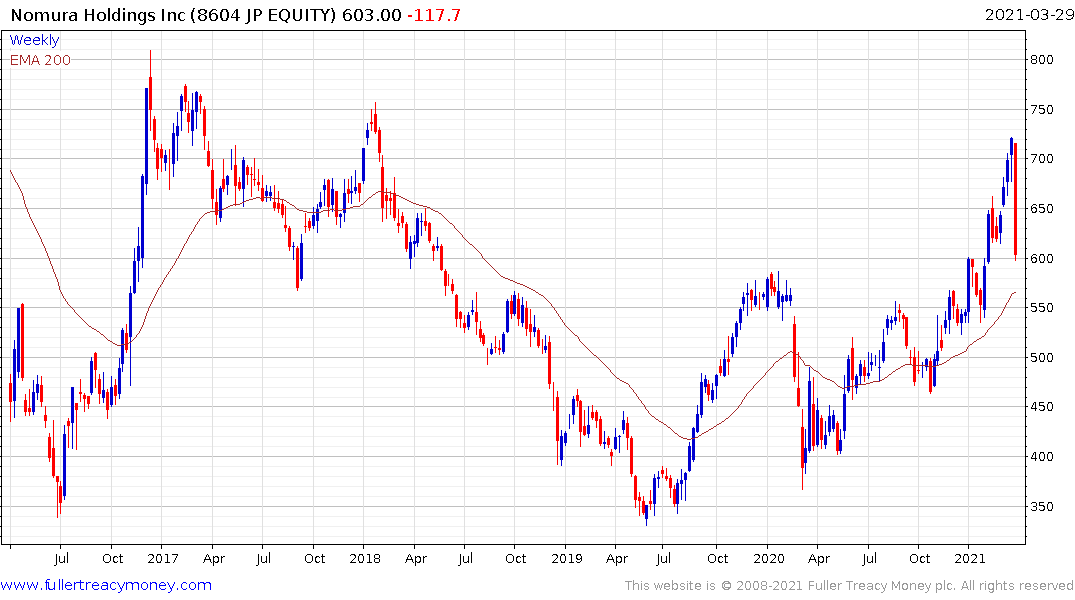 Credit Suisse and Nomura took the brunt of selling pressure in the financial sector because of their net exposure. However, exposure has been limited within the broader sector so far.

Obviously, there are parallels with the failure of Barclays hedge funds in 2007 as the full breadth of issues in the US subprime market began to appear.  That was an eighteen-month process but it accelerated when Bear Stearns went bust. One fund going bust is not a trrend but this is a situation worth monitoring.

The sums of money that caused problems in 2007 are risible compared to what is at stake today. Barclays lost $400 million on its hedge fund, Nomura lost $2 billion last week and that is deemed an acceptable loss. If bond yields continue to trend higher there will be bigger failures, but they will not all occur at once. 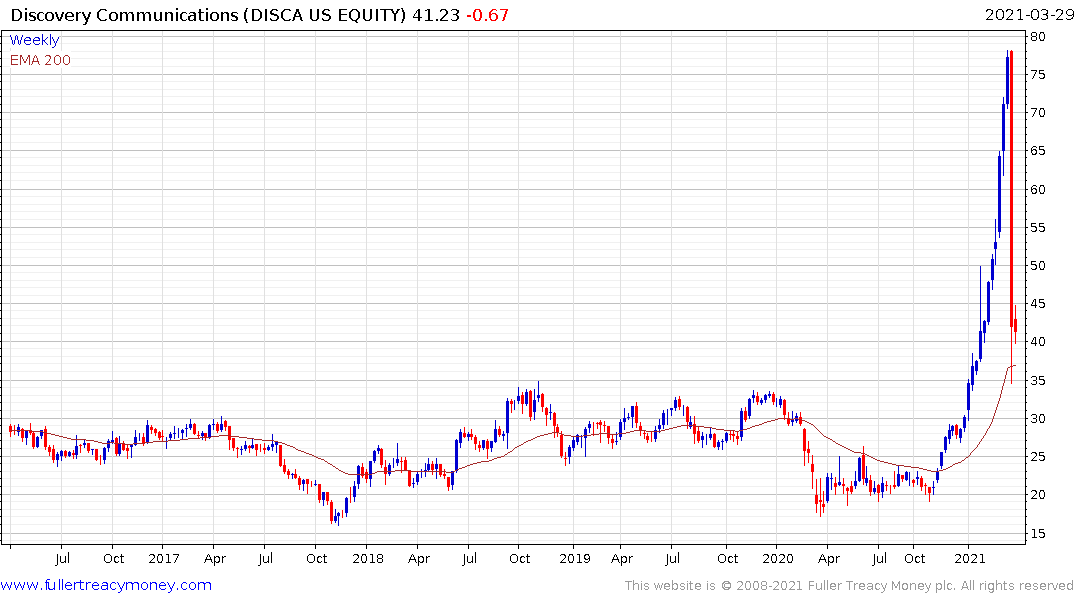 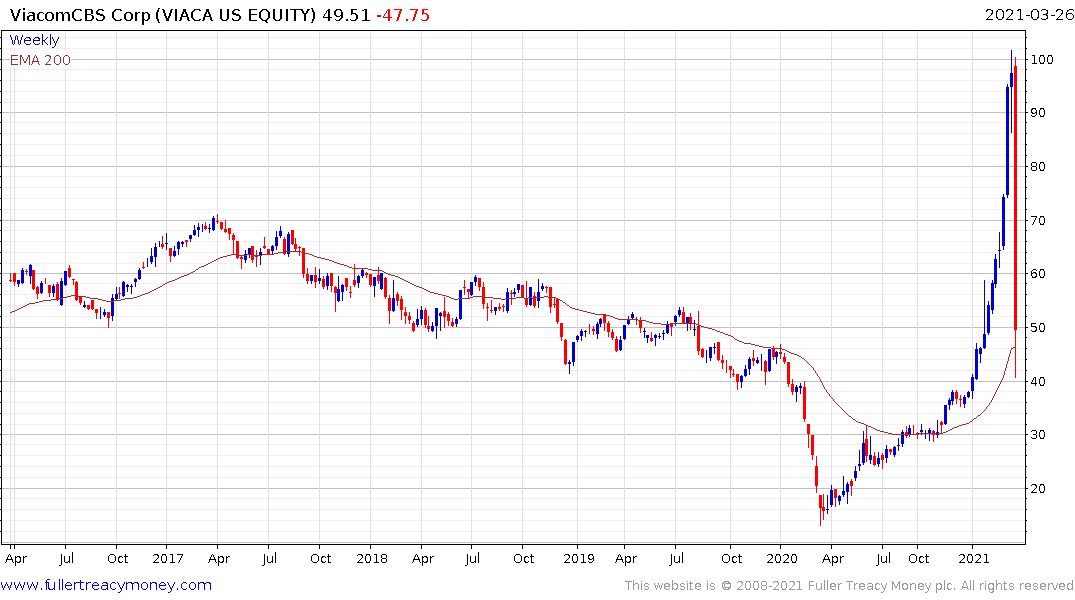 Shares like Discovery and Viacom have now completely unwound their pandemic surges. The big question investors will be asking is what happens from here. They will at least need to hold their lows if this is a meaningful bottoming area but the growth argument is not nearly as convincing as it was at the beginning of the lockdowns. 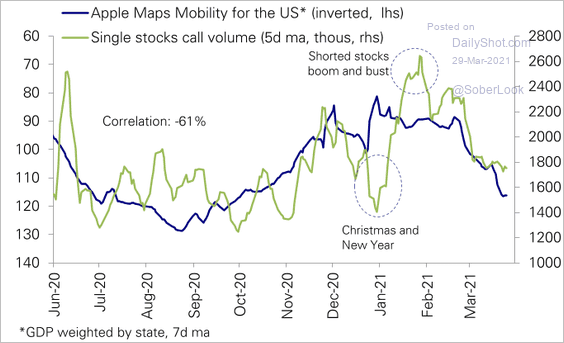 This graphic from Deutsche highlighting the inverse correlation between mobility and day trading activity suggests the growth potential of legacy media companies will be impacted as mobility increases. 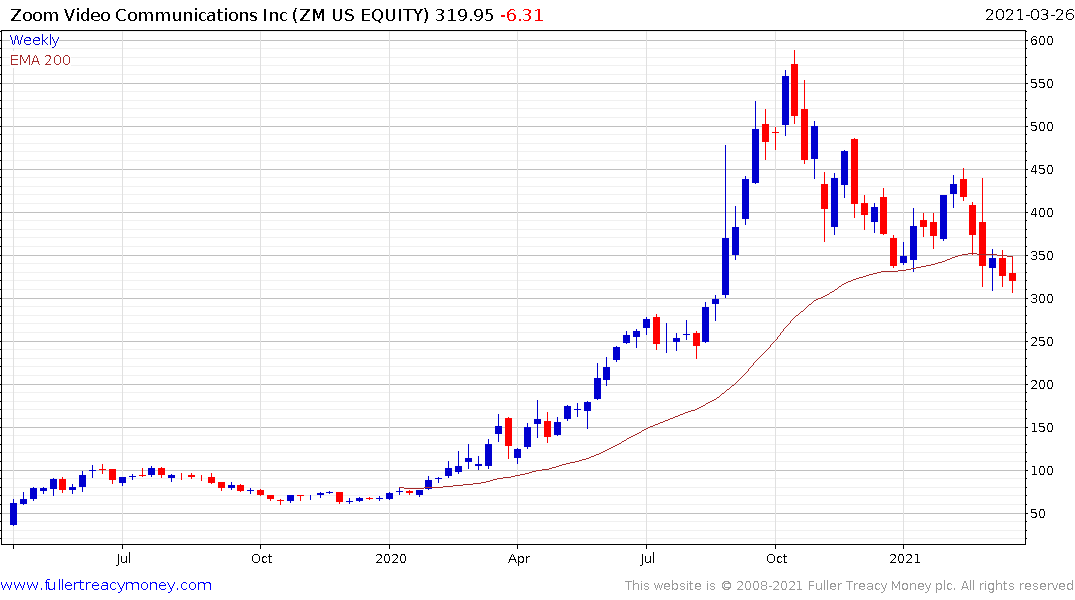 A number of China’s tech champions have also pulled back extremely sharply. Meituan, Tencent and Baidu are in the area of their respective 200-day MAs and steadied today. 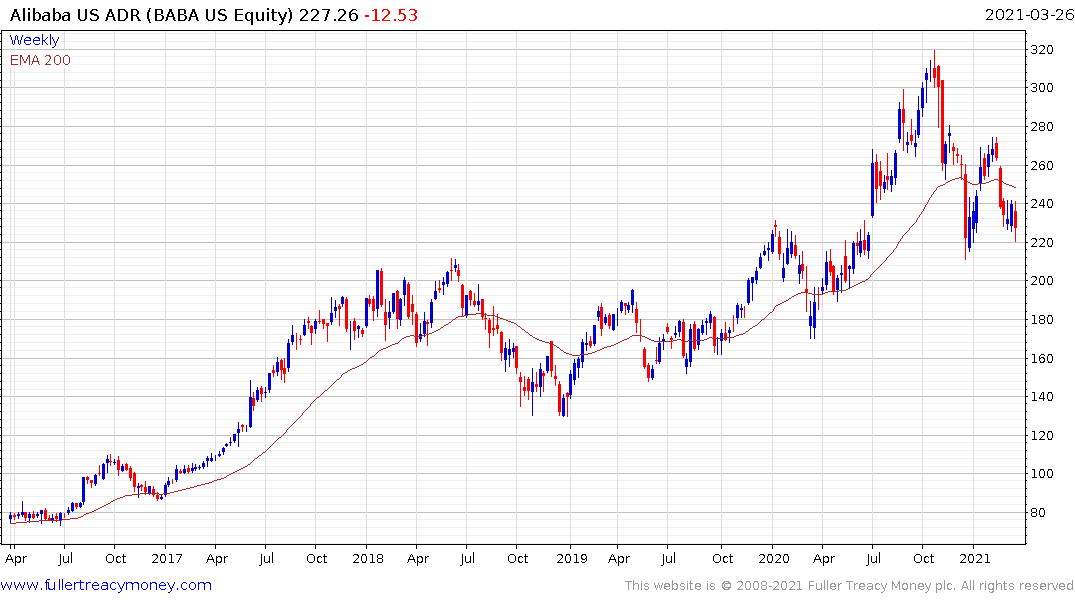 Alibaba steadied from the region of its recent lows but is still below its trend mean. 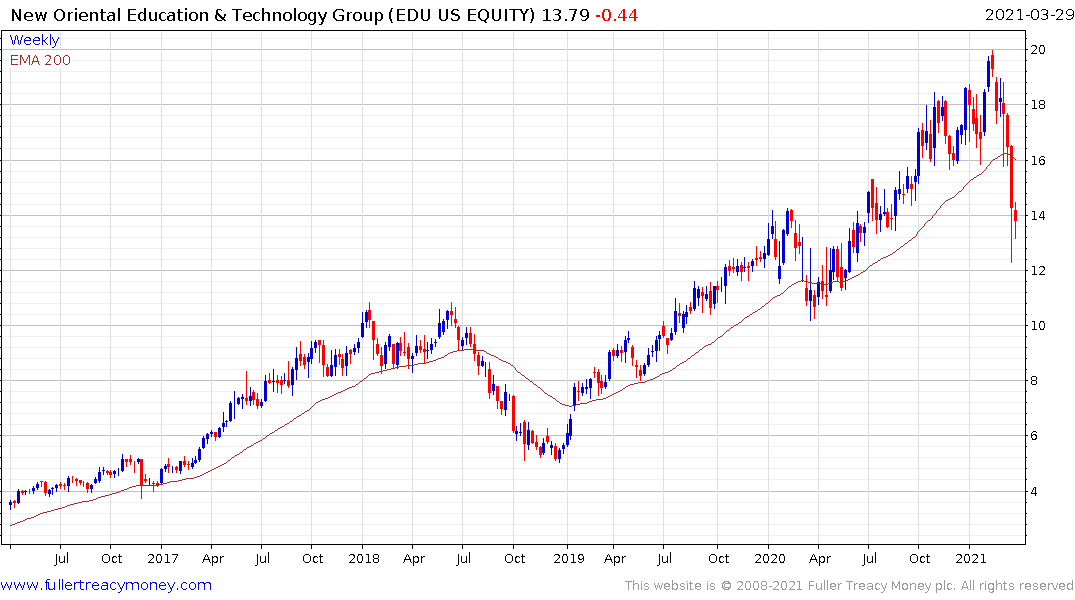 New Oriental Education & Technology Group experienced a massive reaction against the prevailing trend last week and began to steady today. A reversionary rally appears likely but the test of whether this is a meaningful nadir will be in how well the lows hold during the first pullback.

iQiyi pulled back to test the lower side of its more than two-year range today.

The one thing we can be sure of is the value sector will be less affected by leveraged trades being unwound. They have only begun to perform. That doesn’t mean they are immune from some consolidation but the risk of disorderly trading is reduced. 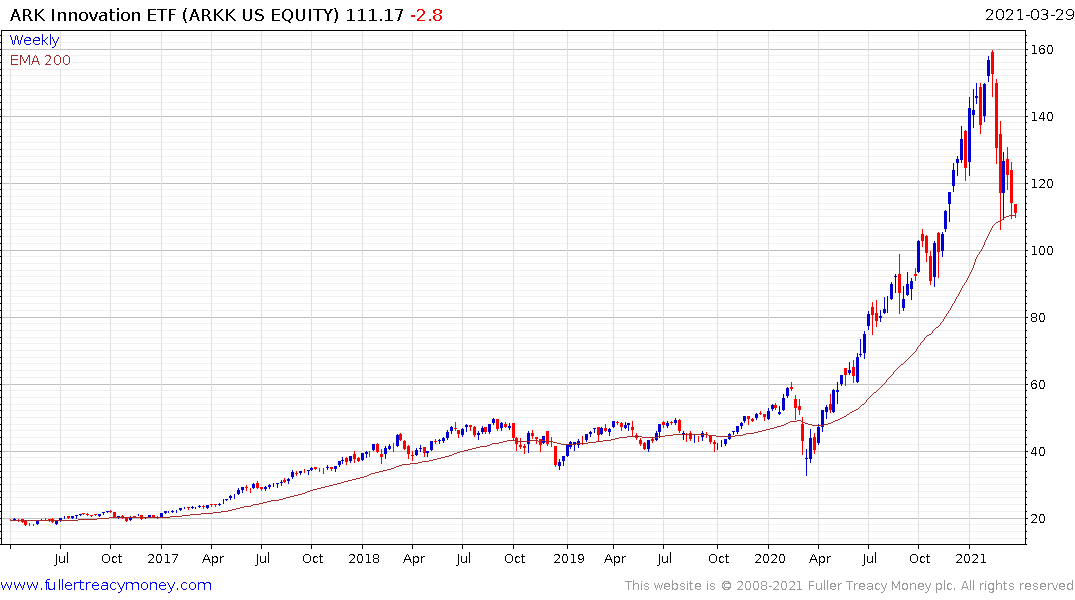 ARK Innovations ETF is doubling down on exposure to loss making, high-growth companies by removing ownership limits. That will eventually end in tears but may open up scope for a rebound from the trend mean in the near term.