In terms of the momentous macroeconomic issues of the moment, this is good for growth, as poorer people are more likely to spend their pay rises than richer people. It’s also potentially bad for inflation. Wage growth for the lowest skilled is the fastest since August 2008 (not coincidentally, the month before the Lehman bankruptcy), and that could easily lead to higher prices.

More interestingly still, it does suggest a shift in the balance of power between labor and capital. This isn’t as yet a deep-seated or well-established trend, of course. But if it continues it could rattle a lot of assumptions, and alleviate a lot of social tension.

There has been a great deal of talk about the increasing shift between labour and capital or, perhaps more prosaically, power of the people relative to capitalists. The role of technology and globalisation in suppressing wages is much less discussed because it is does not fit with the inconvenient narrative of the oppressed masses.

The reality is that shipping millions of jobs to the emerging markets was sold as a way of both bringing down prices and creating greater equality for the oppressed peoples of the Third World. It was seen as a virtuous circle until the full burden of lost manufacturing jobs erupted in populist revolts following the response to the Global Financial Crisis.

Meanwhile there is no getting around the fact that the countries which remain industrial powerhouses have pioneered the deployment of robots and technology to enhance productivity. It is not a coincidence that Germany, Japan, South Korea and Taiwan are among the largest users of industrial robots and that the denuded industrial centres of the USA and UK did not invest in the automation in the same way. The labour movement played a role in those decisions which cannot simply be ignored.

I recreated the chart John Authers included in his article but overlayed the CPI inflation rate. Wage growth for low skilled employs tracked well below the inflation rate between 2010 and 2014. However, it had been trending above the inflation rate until this year which was positive for all workers.

Central banks are praying the inflationary pressures we are seeing today are transitory in the same way they were following the brief rebound between 2009 and 2011. Instead of thinking about the potential rebound from labour activism, perhaps it would be more fruitful to think about the response of capital to an environment where wage demand growth from low skilled workers is surging.

London had hotels with no reception desks a decade ago. Artisanal ramen restaurants in Los Angeles were experimenting with iPad ordering three years ago. I was at a Peking duck restaurant a couple of weeks ago where the meal was delivered by a robot on wheels. Whenever one enters a McDonalds today, most of the ordering takes place on a touch screen.

Low skilled workers are the easiest to replace with technology. That’s always been how businesses deal with wage pressures. The long wage growth persists and as long as interest rates remain low, the relative cost of deploying technological solutions to reduce headcount will persist. 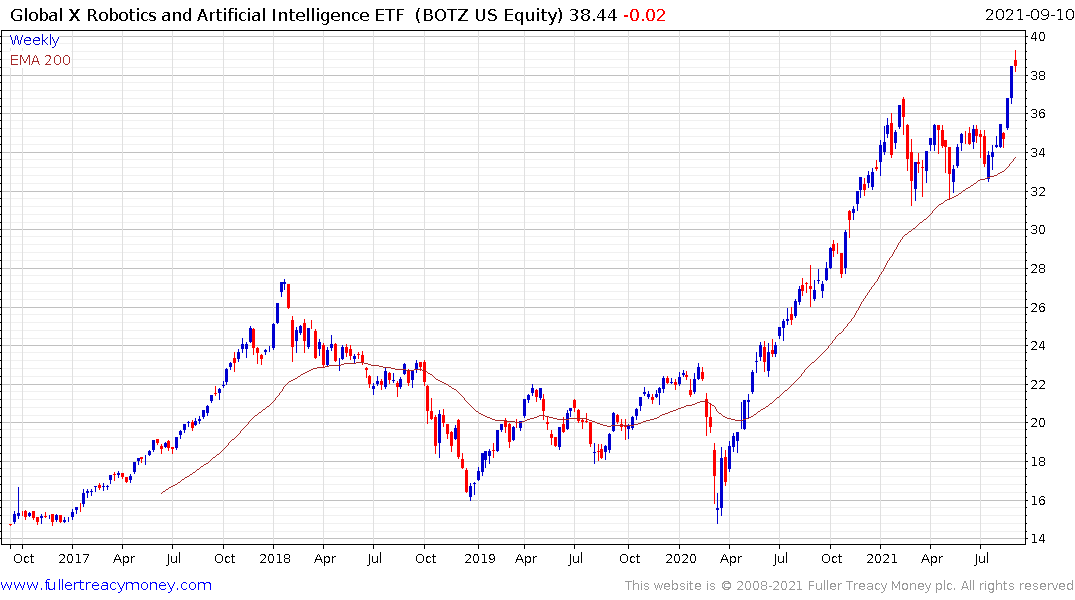 The Global X Robotics and Artificial Intelligence ETF broke out of a six-month range last week and improved on that performance this week.