A contrarian view on Europe
Comment of the Day

A contrarian view on Europe by Eoin Treacy

From a valuation perspective, European equities have not been this unloved for quite some time. Using an average of nine common valuation metrics, the chart to the right plots the relationship between two popular indices that represent equity markets in Europe and the rest of the world, MSCI Europe and MSCI AC World. The discount for Europe is at or below levels reached in the Sovereign Debt Crisis of 2011/2012 and the Global Financial Crisis of 2008/2009. Do fundamentals support this sentiment?

Though recent macroeconomic data such as PMI, IFO, and GDP growth have been weaker than expected, they have been impacted by some one-off events: new WLTP diesel regulations leading to a severe fall in car production; a 200-year low in the Rhine River's water levels causing a disruption in the transport of goods; and the ‘Gilets Jaunes’ protests across France. WLTP and Rhine effects appear to have largely normalized whilst in France, though the protests have continued, recent opinion polls now indicate falling levels of support for the ‘Gilets Jaunes’ and rising popularity for President Macron. As the year progresses, a reversal in the impacts of some (if not all) of these temporary issues should be reflected in improving macro-economic data – some of which we are already starting to see (e.g. December’s sharp uptick in auto-related industrial production).

Here is a quote from the foreword by Mario Draghi in the ECB’s annual report: “Substantial monetary policy stimulus remains essential to ensure the continued build-up of domestic price pressures over the medium term,” There is virtually no prospect of the ECB raising rates and in fact the balance of probabilities is pointed towards another round of quantitative easing. The main question is how long this is going to take to action.

Europe’s consumer-oriented exporters like L’Oreal, Hermes, LVMH, Wolters Klowe, Qiagen etc have been hitting new highs. Meanwhile the domestic sector is where value resides. Unfortunately, it is not easy to buy domestic Eurozone plays without concentrating on the financials and energy sector.

In much the same way that banks are inhibited from lending and trading by negative deposit rates, the investment management and life insurance sectors tend to do better and they are largely domestic plays. 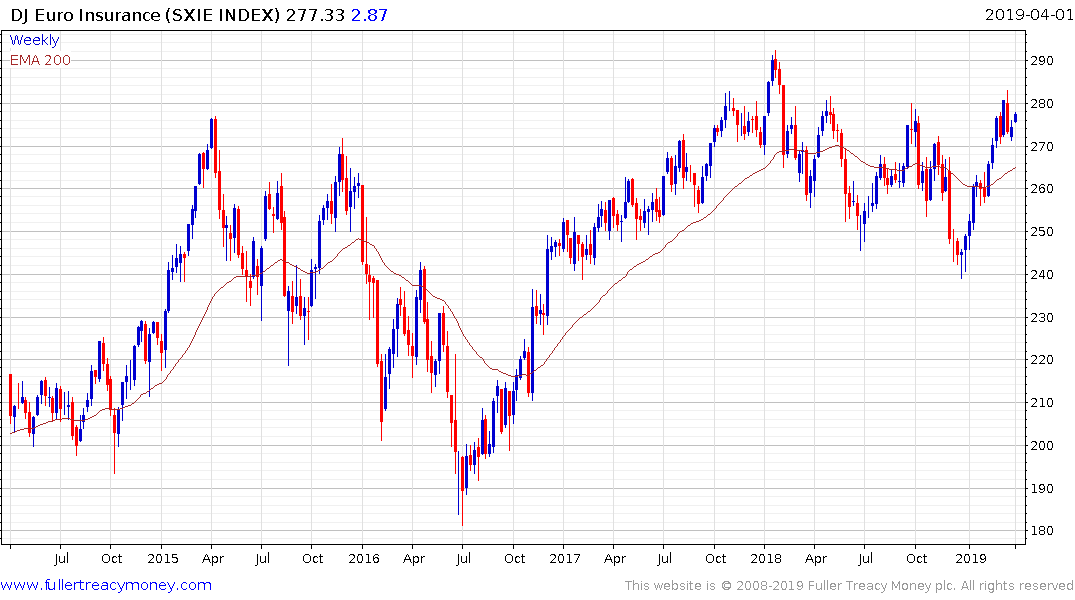 The Euro STOXX Insurance Index is back testing the upper side of a yearlong range and remains in a reasonably consistent medium-term uptrend.

I do not know of an index that covers Eurozone investment managers but here are some of the larger ones: 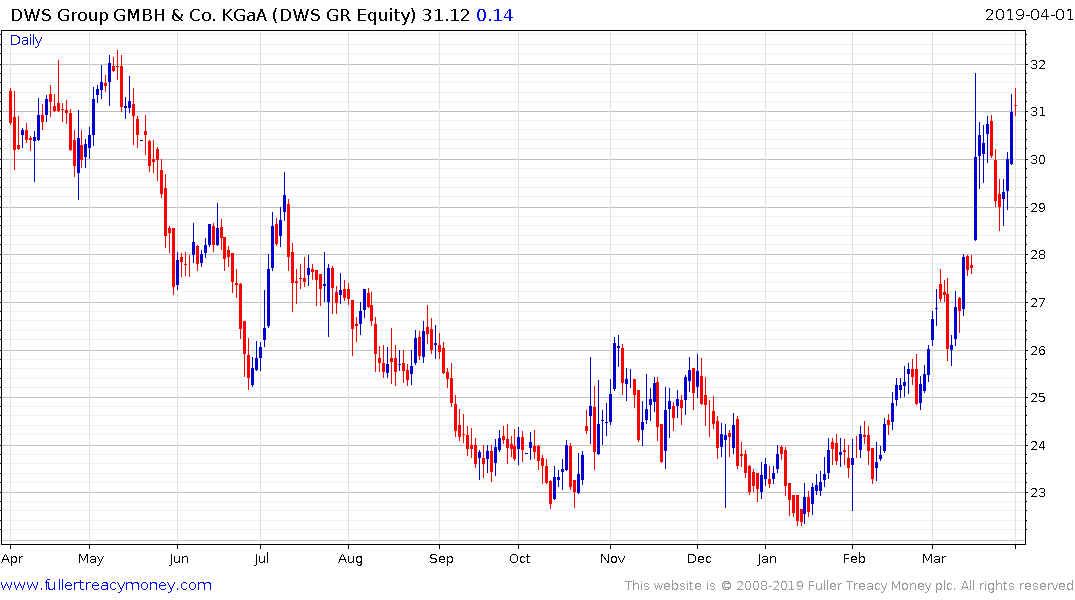 DWS Investment Management has been rallying rather impressively since the beginning of the year and is now back to its IPO price from a year ago. 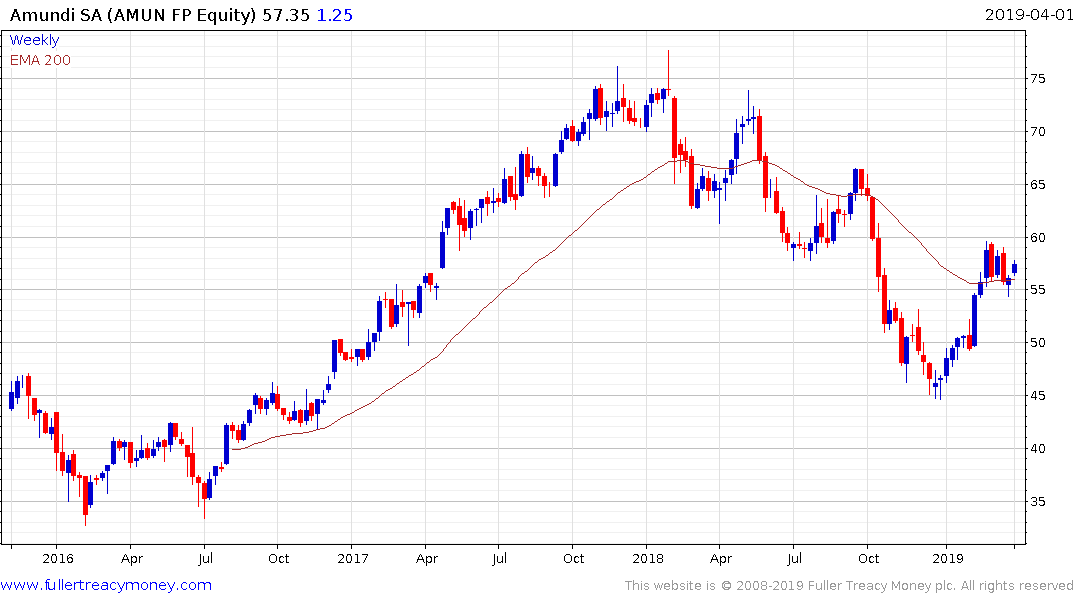 Amundi is back testing the region of the trend mean and a sustained move above it would break the medium-term downtrend. 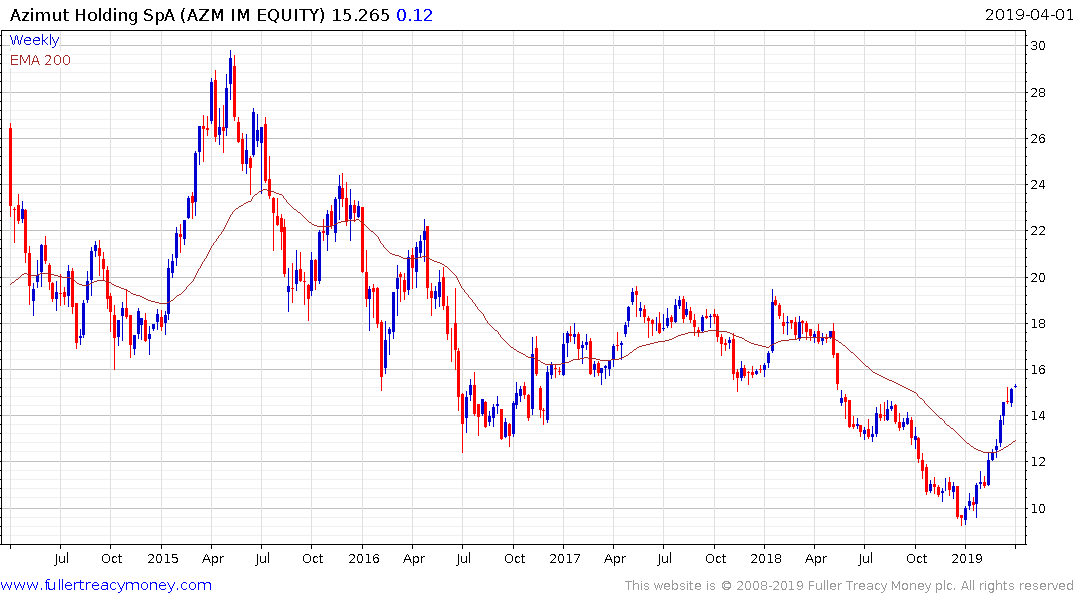 Azimut Holding has been rallying on consecutive weeks so far this year. 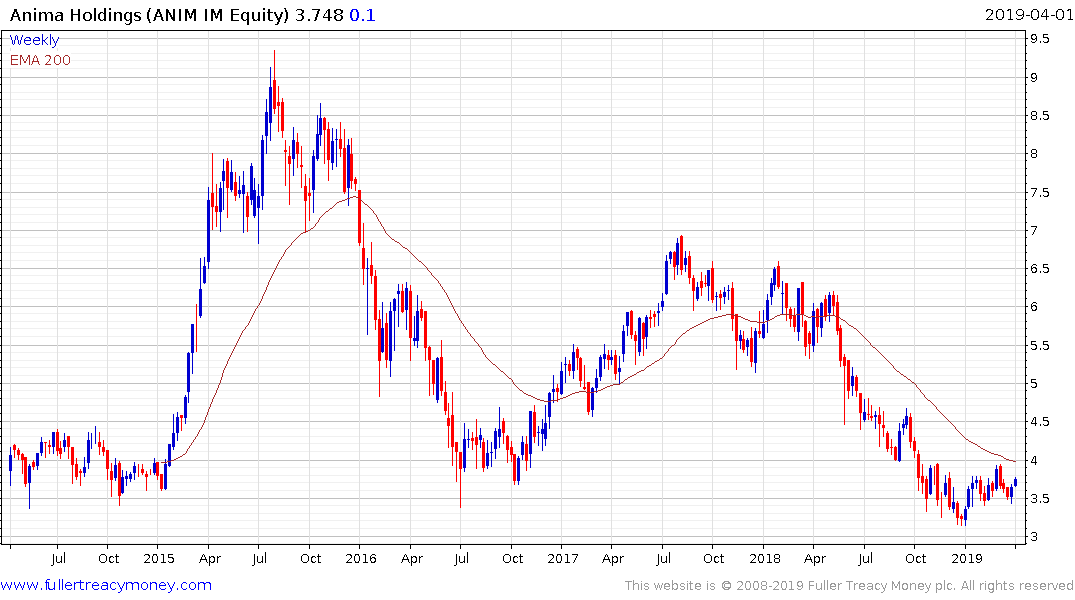 Anima Holding is firming towards the upper side of a six-month base formation.