The discussions between Yang and his Vietnamese counterpart, Deputy Prime Minister and Minister of Foreign Affairs Pham Binh Minh, were not strictly convened to discuss South China Sea issues; but it is clear the oil rig crisis dominated talks. In private remarks Yang strongly advised Vietnam not to take legal action against China in the interest of repairing bilateral relations. Yang also held meetings with Prime Minister Nguyen Tan Dung and party Secretary General Nguyen Phu Trong. The latter meeting was especially significant because it led to an informal understanding to find a mutually acceptable way out of the current impasse. In order to clear the way for bilateral discussions both sides agreed to conduct follow up discussions by party officials responsible for external affairs. While Chinese and Vietnamese party foreign affairs specialists began sounding each other out, Vietnamese party leaders agreed to convene a meeting of the Central Committee specifically to focus on the South China Sea dispute and the proposal to initiate legal action against China. Given the ground swell of anti-China opinion in the party and society at large “to break out of China’s orbit,” it appeared likely that the Central Committee would not only approve legal action against China but also approve steps to align more closely with the United States. Foreign Minister Minh’s trip was approved and he is scheduled to visit Washington in September. It was in this context that China decided to announce the early withdrawal of HYSY-981 from contested waters. According to retired General Nguyen Trong Vinh (xuandienhannom blog, July 16), China deliberately withdrew the oilrig to influence the outcome of the forthcoming Vietnamese party plenum. The coincidence of Typhoon Rammasun provided the pretext. If Chinese officials were concerned about the safety of HYSY-981 they should have left it in place rather than tow it towards Hainan Island where Typhoon Rammasun was headed.

The ratcheting down of tensions between China and Vietnam, at least temporarily, is a welcome development suggesting China is interested in keeping Vietnam within its sphere of influence. How the Chinese will act once Vietnam’s 9th plenum has ended remains open to question. 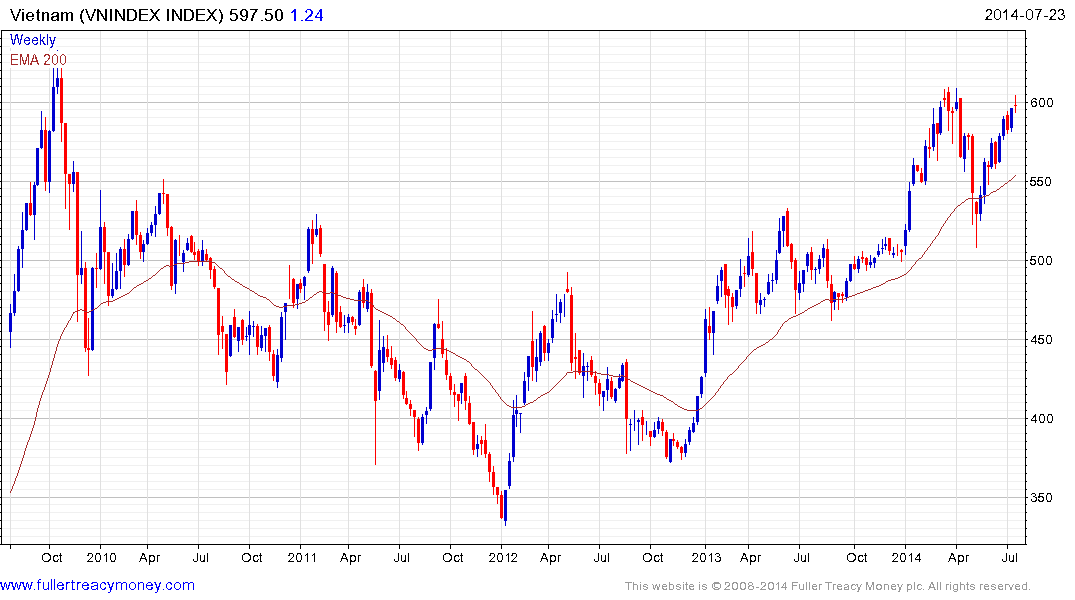 The Vietnam Index bounced from the region of the 200-day MA in mid-May and has regained its earlier peak. Some consolidation in the region of 400 is possible but a sustained move below the 200-day MA would be required to question medium-term scope for additional higher to lateral ranging. 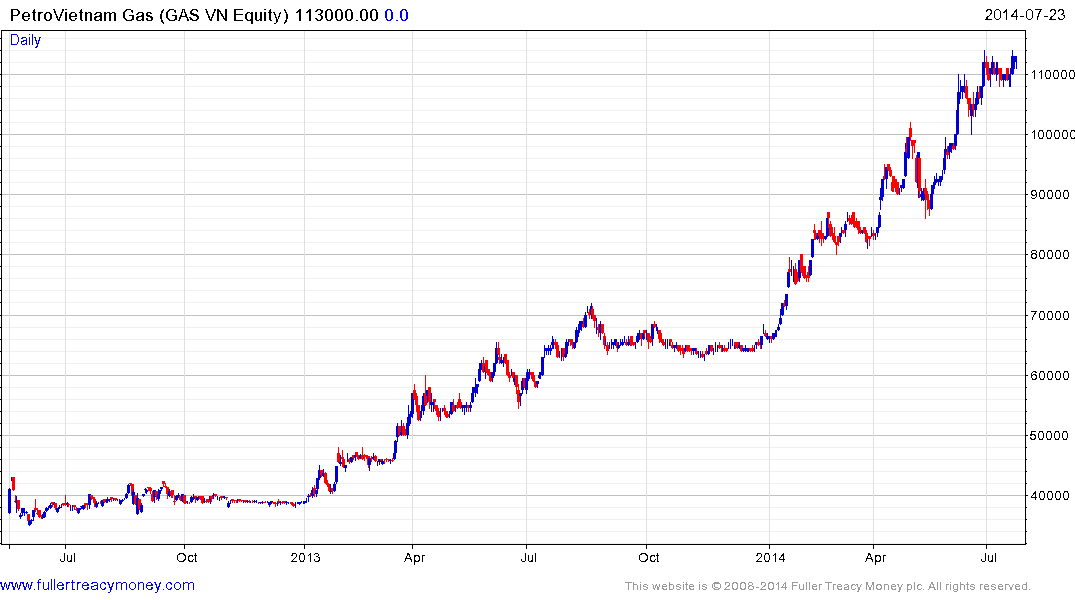 The Index is being led higher by its largest constituent PetroVietnam Gas which was listed last year. The share remains in a reasonably consistent uptrend. 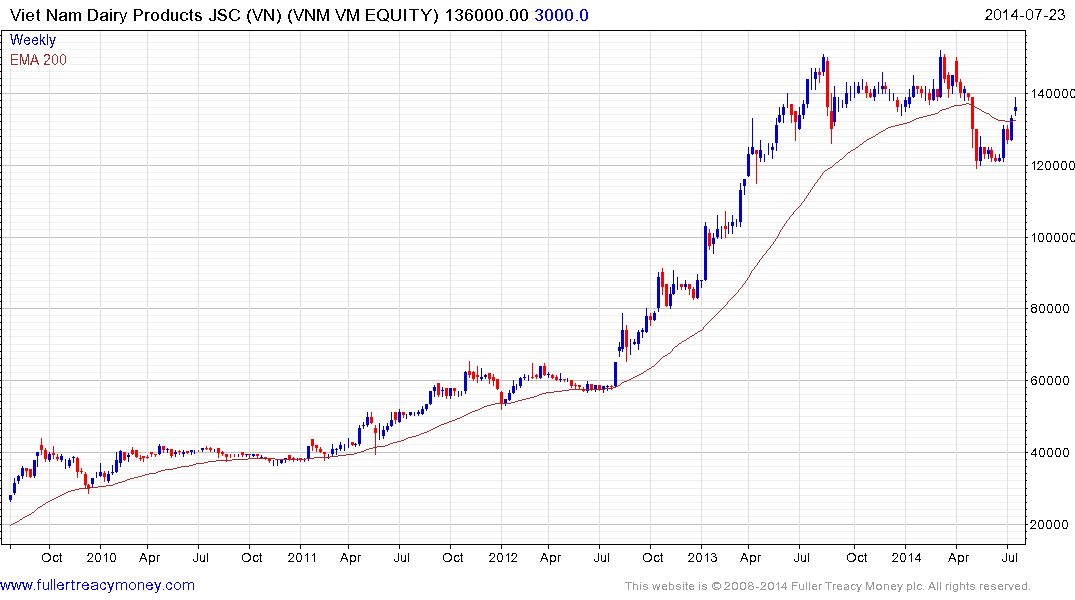 Vietnam Dairies has returned to test the lower side of the overhead range and will need to sustain a move back above VND140,000 to begin to offset type-3 top formation completion characteristics. 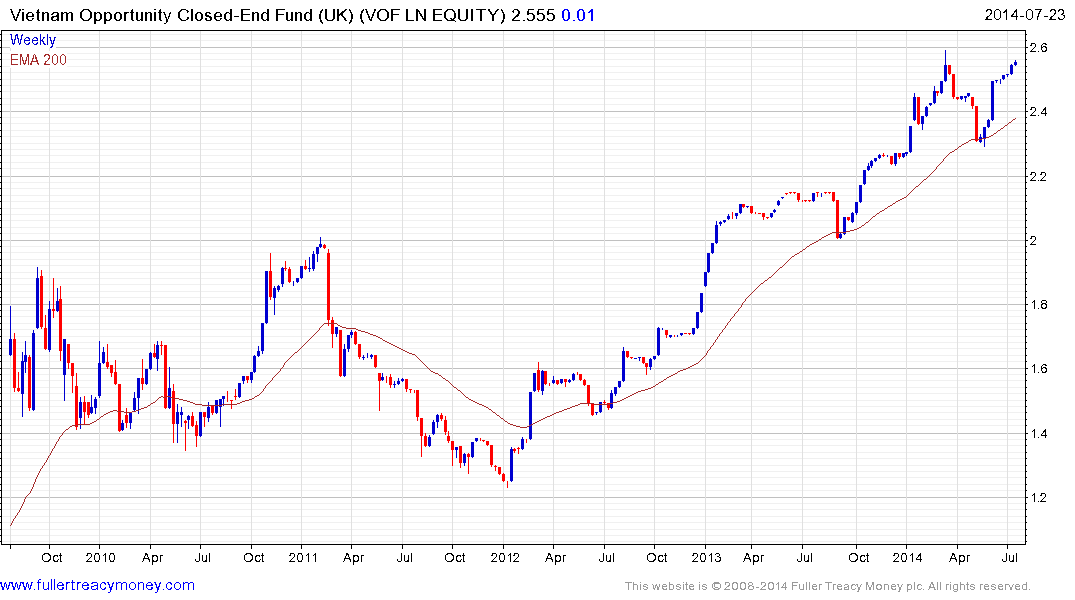 The Vietnam Opportunity Closed End fund continues to trade at a discount to NAV of 22% and shares a similar pattern to the wider market.