2020 Vision: An Early Guide to the US Election
Comment of the Day

2020 Vision: An Early Guide to the US Election by Eoin Treacy

A more surprising observation might be that we see some symmetry to the potential direction of the macro impact in both unified government scenarios. While far from assured, both open the possibility of fiscal expansion, fueled in part by messaging driven implicitly by ideas such as the Laffer Curve and MMT.

This conclusion appears to cut against investor expectations, at least as it pertains to the "Blue Wave" scenario. Our survey suggests investors see a Democratic White House as both less likely to pursue cycle-extending policies like fiscal stimulus and more likely to coincide with risk-asset weakness. Perhaps it is because investors also see Democrats as more likely to pursue policies that will challenge profitability in key sectors, such as prescription drugs and health insurance.

The one thing I see around my neighbourhood in west Los Angeles is the houses that were posting Bernie Sanders signs in 2012 are now supporting Elizabeth Warren. The big question is whether the Democrat’s administrative body will favour anointed conventional candidates like Joe Biden over the progressive wing of the party in the same way it did for Hilary Clinton versus Bernie Sanders.

The one thing we can be assured of its that while the next administration, regardless of who wins, will be eager to provide further fiscal stimulus. However, investors are justifiably leery of progressives with avowedly anti corporate policies.

The chances of the Trump administration winning without the economy firing on all cylinders is quite remote. Therefore, the efforts to get a trade deal signed and to reduce tariffs are likely part of the wider strategy to prime the pump ahead of the election. 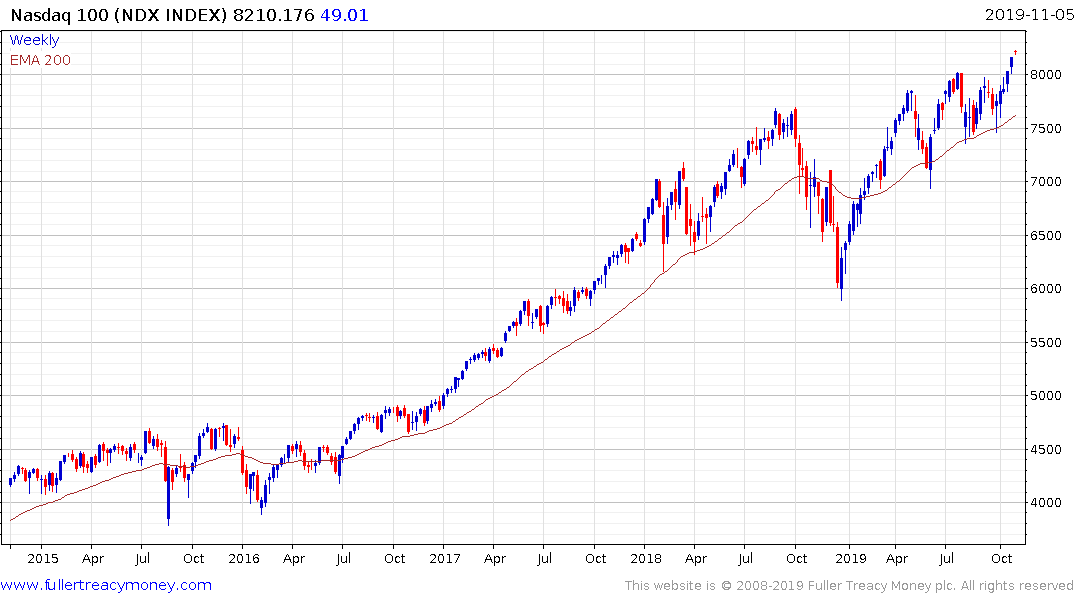 The Nasdaq-100 continues to extend its breakout to new highs and a sustained move below the trend mean, near 7500 would be required to question medium-term scope for continued upside.