2014: a year of economic rebalancing
Comment of the Day

2014: a year of economic rebalancing by Eoin Treacy

In recent weeks, investors have been treated to a litany of bad news from China: disappointing Jan-Feb economic data, the first ever default in the domestic bond market and another default in the trust sector. With slowing money supply and credit growth, fears of a ‘hard landing’ or systemic crisis have been re-ignited. We remain of the view that such concerns are exaggerated. The increasing profile given to credit events reflects, we think, a desire to educate depositors about risk more than a genuine increase in risk.

Nevertheless, the weaker economic data cannot be ignored and we have revised down our forecast for 2014 GDP growth to 7.8% from 8.6% previously and our CPI inflation forecast to 2.2% from 3.7% previously. This represents a mild pickup in growth in 2014 in both real and nominal terms relative to 2013, albeit less dramatic than we previously expected.

We estimate that the Jan-Feb data are consistent with GDP growth slowing to about 7.4%yoy in Q1 from 7.7% in Q4. With growth slowing towards the bottom of the government’s 7%-8% comfort zone, this weakening momentum is likely to elicit a policy response. The decline in interbank rates in recent weeks may be the initial monetary component of this stimulus. Recent approvals of RMB142bn in government investment for five railway projects may be the beginning of the fiscal component. We think the government may also seek to accelerate growth-enhancing reforms, especially liberalization of private investment.

But we expect any stimulus to be very modest. The slowdown is largely the outcome of the government’s efforts to rebalance the economy’s structure and senior policymakers have frequently noted that rebalancing is likely to depress activity in the near term. What they will seek to do is to support growth to prevent an increase in financial risks and to ensure adequate employment growth. Aggressive monetary stimulus could, to be sure, boost growth rapidly, but at the cost of the rebalancing agenda. So the reform agenda constrains the policy response in some ways but also shapes the response towards accelerated liberalization in a bid to support growth through means other than traditional stimulus.

We think Q1 is likely to be the trough for growth this cycle, then, in part because we see a policy response aimed at providing a little stimulus. More important, though, we expect the external sector to re-emerge for the first time in four years as a source of growth in the economy. Exports grew at an annualized rate of about 17% over the last six months of 2013 and we expect that as US activity recovers from its winter chill the apparent pause in Chinese export momentum so far this year will be replaced by renewed growth. We look for net exports to contribute about 0.6ppts to GDP growth this year, a forecast that we view as conservative.

Two clear results of the People’s Congress have been a willingness to allow systemically unimportant companies declare bankruptcy and to allow the Yuan to weaken. In many respects these two policies are intertwined. If the administration is to cut off funding to failing entities it will need the manufacturing sector to return to being a central performer in the country’s growth engine. A weaker currency would certainly help in that objective.

Last week’s announcement that companies will be able to issue preferred shares has been particularly welcomed by the banking sector and Hong Kong listed shares bounced impressively this week. Bank of China (Est P/E 5.04, DY 7.18%) retested its June low last week and posted its largest upward dynamic in at least the last 9 months this week to break the short-term progression of lower rally highs. 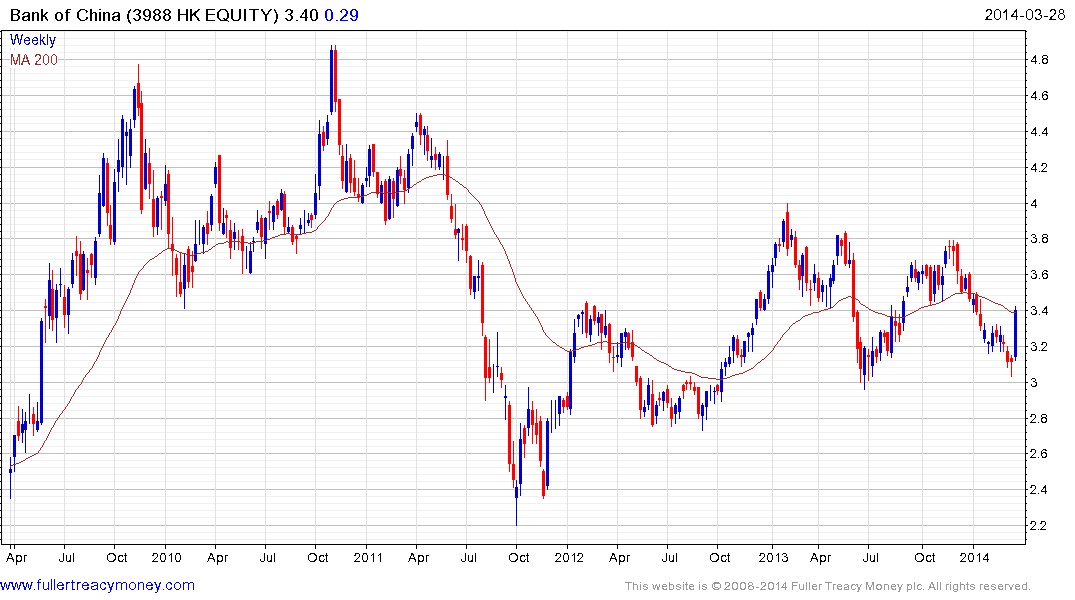 I clicked through the constituents of the Hang Seng and China Enterprises Index (H-Shares) this morning in order to get a feel for how the market is performing. The most common pattern is of state owned enterprises i.e. banks, builders, energy companies bouncing from previous areas of support and beginning to unwind short-term oversold conditions. 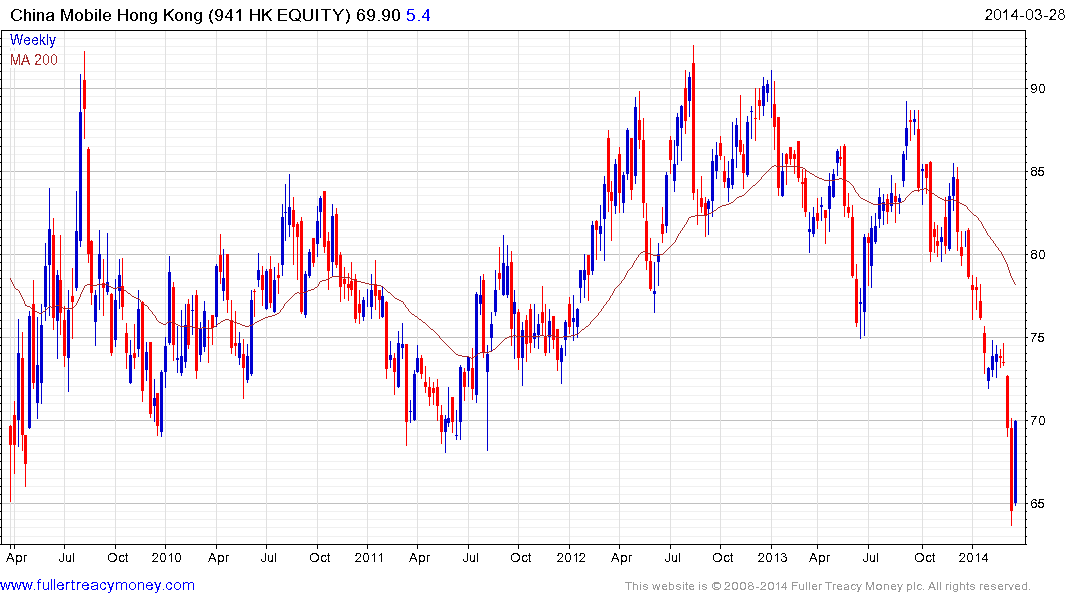 China Mobile (Est P/E 10.31, DY 4.73%) had been deteriorating for a number of months but accelerated lower in March to last week’s low near HK$63. It has rebounded this week suggesting short covering and a reversion back up towards the mean looks more likely than not. 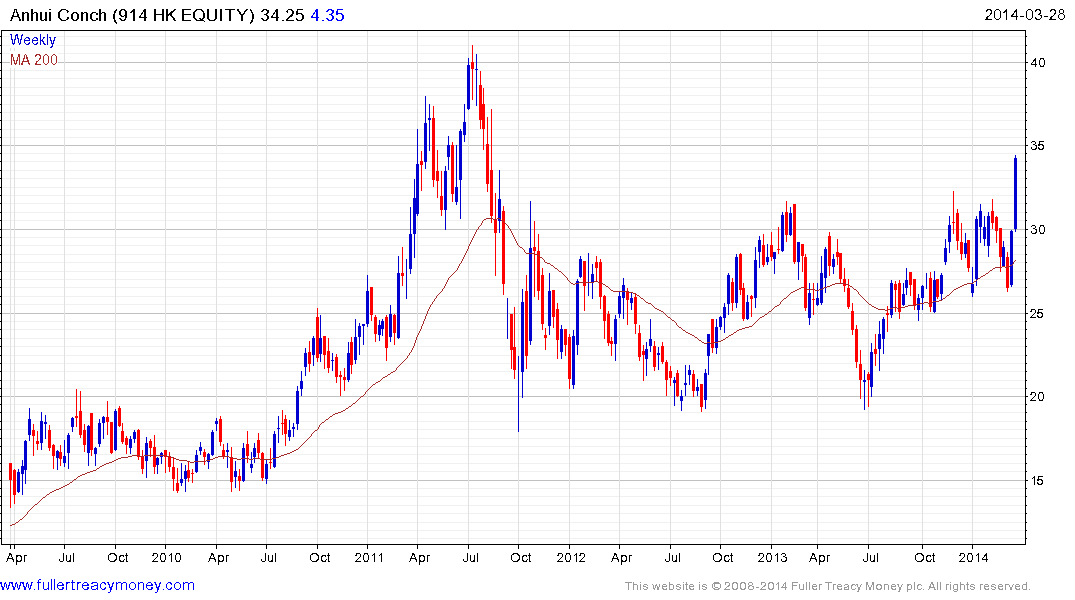 Anhui Conch (Est P/E 12.29, DY1.28%) is particularly notable. It has been consolidating in the upper regions of a 30-month range since the beginning of the year and broke emphatically upwards this week. There is a high degree of commonality in the global cement sector suggesting this is not an isolated incident and that the sector is on a recovery trajectory globally. (Also see comment of the Day on February 19th)