"The Fed is Clueless" by Eoin Treacy

Negative yielding debt is a concept that could only be considered rational by an academic. Given 4,000 years of human history, I’ll bet this is as faulty an idea as there ever has been and that it will be proven to be 100% hokum. Negative yields distort the entire capital asset pricing model. They undermine financial company profit models, pension fund liability assumptions, and seriously work to reduce the attractiveness of lending money and financial liquidity by eliminating the ability to do repo finance. But don’t worry, since the central banks will save the day by buying corporate debt. Isn’t that what the Japan’s central bank did, as well as the ECB? And what have these policies achieved in terms of real economic growth? Very little! And now we have members of the Fed actually discussing and agreeing that a negative rate can be effective and appropriate. In other words, penetrating the zero-rate boundary will broaden their policy options. Again, the Fed is clueless and is working with inadequate and ineffectual sets of econometric models.

Negative rate policies distort the economic and financial market systems. The unintended consequences from these policies will be significant and harmful. To deploy capital successfully, the potential list of companies is most likely very limited. At the very minimum, potential target companies should have extremely strong balance sheets to weather the oncoming economic and financial market tsunami. They should also have strong market positions. My guess few companies, with this limited set of criteria, would be attractively priced. Thus, a high level of liquidity is necessary. Finally, escaping to long-term bonds is similar to investing in equites, since their effective durations have volatility characteristics like those of equities.

Stock markets are waiting with baited breath to hear what the ECB has planned on Thursday. The bond markets have priced in a flotilla of policy easing tools such as negative short-term interest rates, deeper negative deposit rates, a tiered deposit rate to aid the banking sector and a fresh round of quantitative easing. The strong momentum push in bonds to a record total of negative yields priced in all of these initiatives.

There is significant scope for a sell-the-news decline to pick up pace if, as seems likely, the ECB disappoints market expectations. The pop in bond yields, globally, is already beginning to price that in. The refusal of EU governments to abandon the fiscal strait jacket is likely to become an increasingly important factor as the bloc’s economy slows. 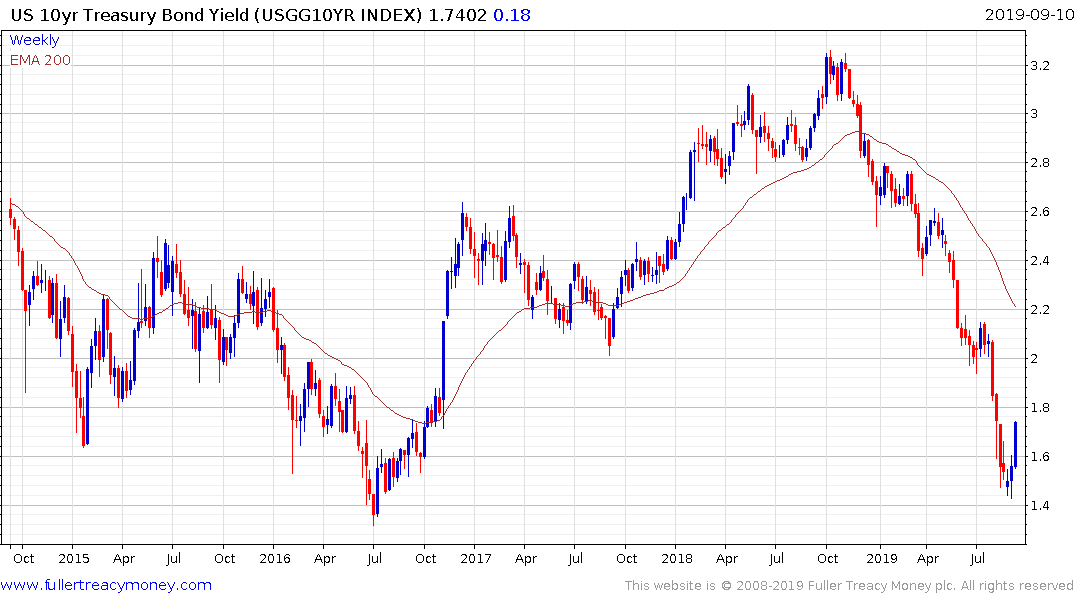 The bigger picture is no one is under any illusion that central banks are ready to re-enact the monetary easing they deployed to tackle the last recession. The capitulation of the Fed to an almost 20% decline in stock prices late last year answered the question that had been outstanding about the existence of Powell Put since he took the job.

Central bankers have been very clear they are willing to do whatever is necessary to avoid a recession. That means they are willing to pre-empt negative data by easing early which is a recipe for a bubble in risk assets. As long as the major indices are trading above their respective trend means the benefit of the doubt can continue to be given to an upward break. 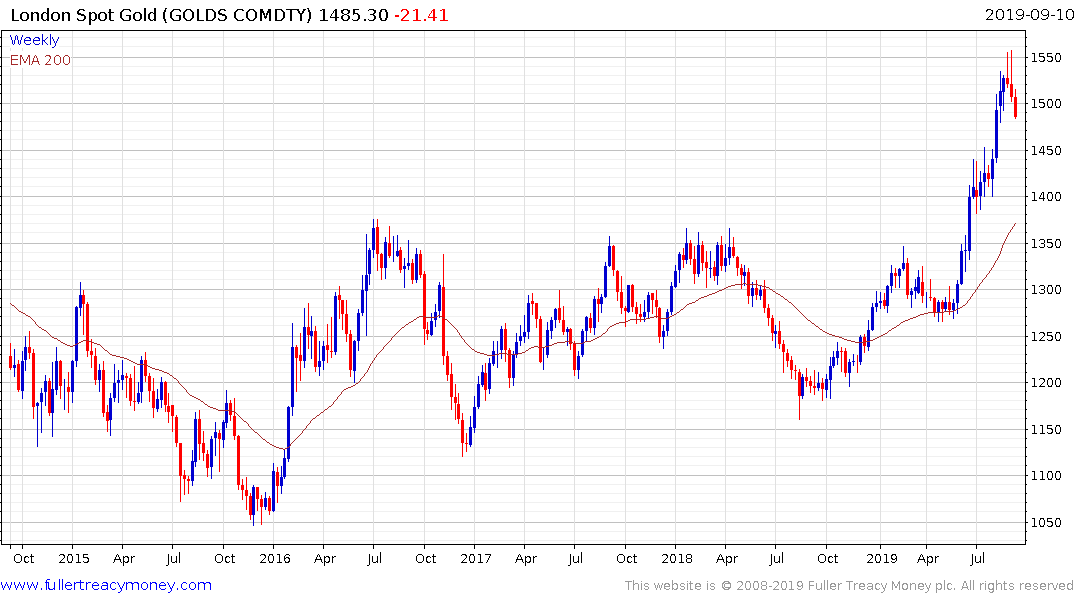 Meanwhile gold is unwinding its short-term overbought condition and is potentially at the beginning of forming a first step above the base.