Foreign investors pulled $9.6 billion from developing-nation bonds outside China in December, the most outflows since March 2020 when the initial shock of the pandemic tore through markets, according to the Institute of International Finance.

Fortun says the split between China and other emerging markets comes down to investors betting that the world’s second-biggest economy will rebound faster than the rest.

There is a real danger in reading too much into fund flow data that is a month old. The narrative can change in a matter of hours in this environment. The strong Dollar, supported by the expectation of tapering interest rate hikes and balance sheet run off, was the dominant theme for the last few months. It also assumes loose talk about multiple rate hikes can in fact be put into place.

A 5% pullback on the S&P500 has resulted in a more dovish tone from Jay Powell. How dovish would he become with a 20% pullback? The media likes to portray the Fed as reacting to higher inflation, it seems to ignore the fact that the Fed also seems to look at asset prices as a vindication for its policy decisions. If home price appreciation moderates as expected this year, that will ease a lot of the factors that contribute to high inflation readings. 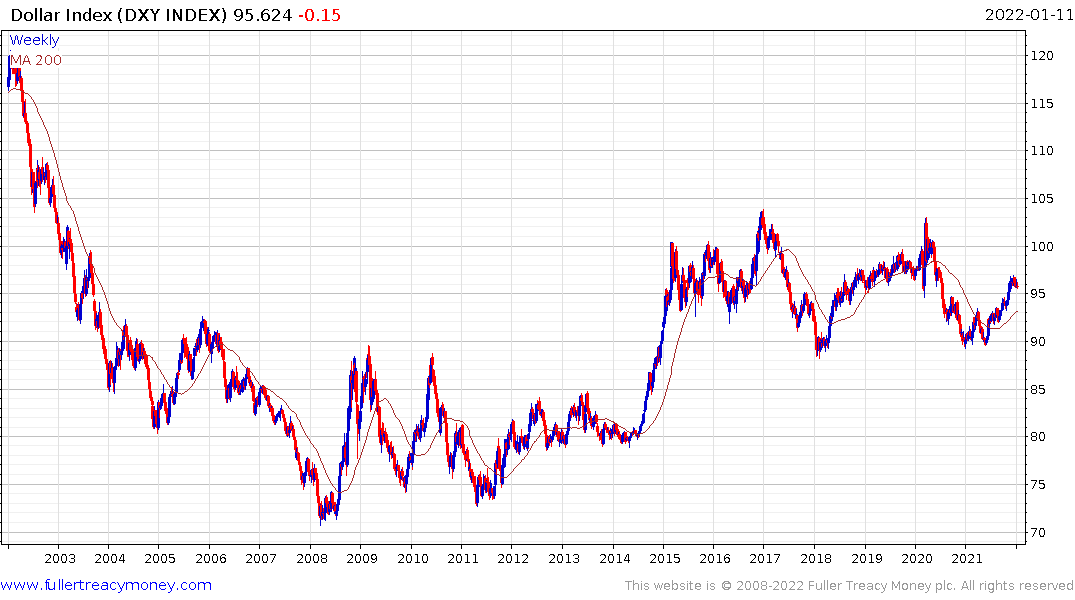 The Dollar Index appears likely to unwind its overextension relative to the trend mean. That mostly reflects the Euro’s scope for a rebound. 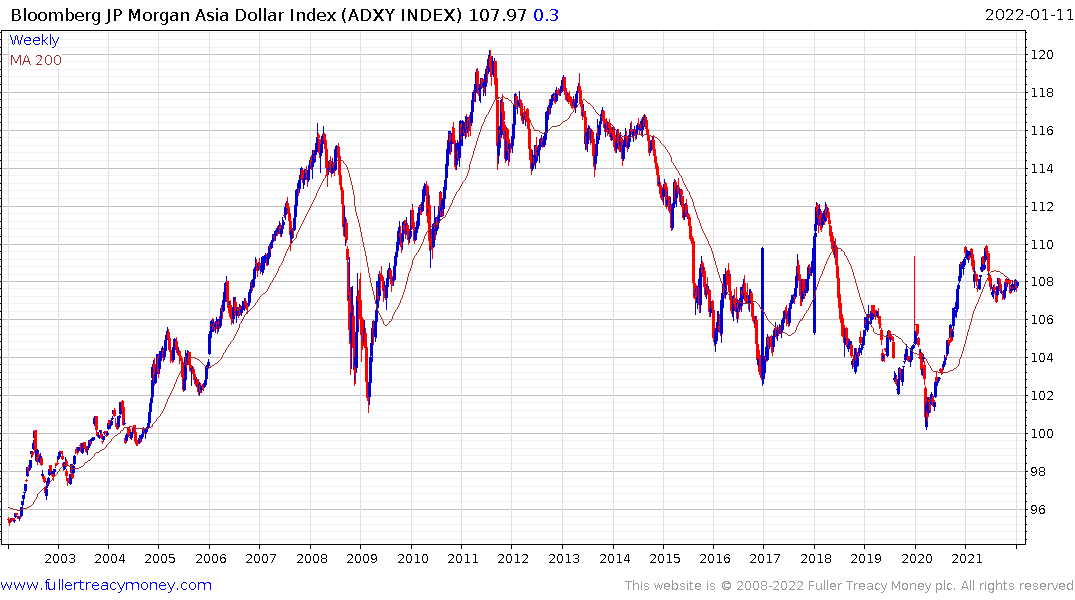 The Asia Dollar Index has been ranging for six months and is now testing the upper boundary. There is clearly scope for additional upside on this Index and the supports the view that emerging markets are about to attract a good deal more capital than is described in the above article. 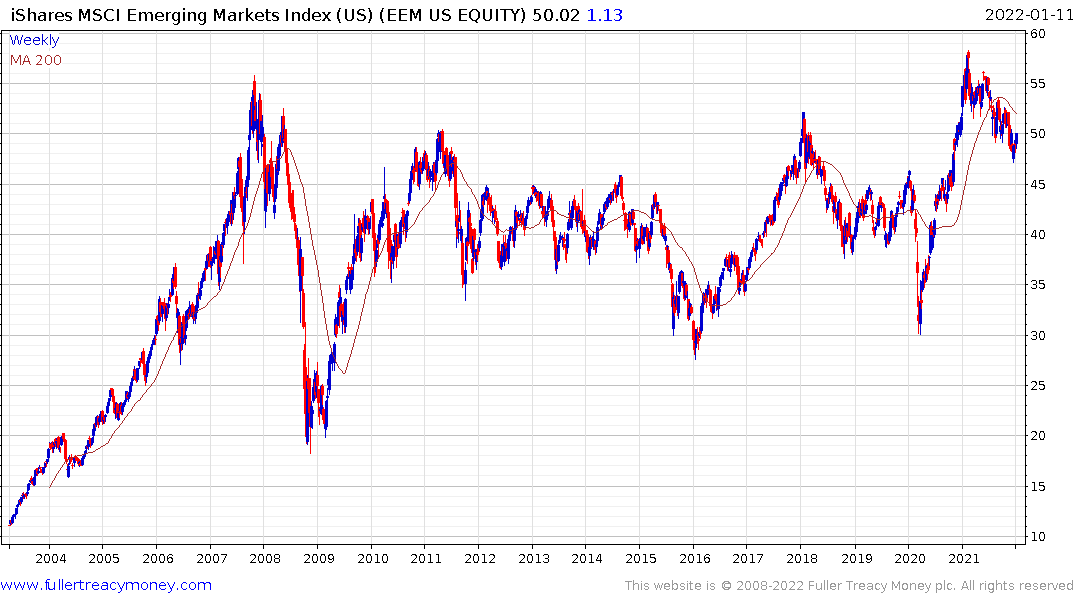 The MSCI Emerging Markets ETF continues to consolidate in the region of the all-time peaks. 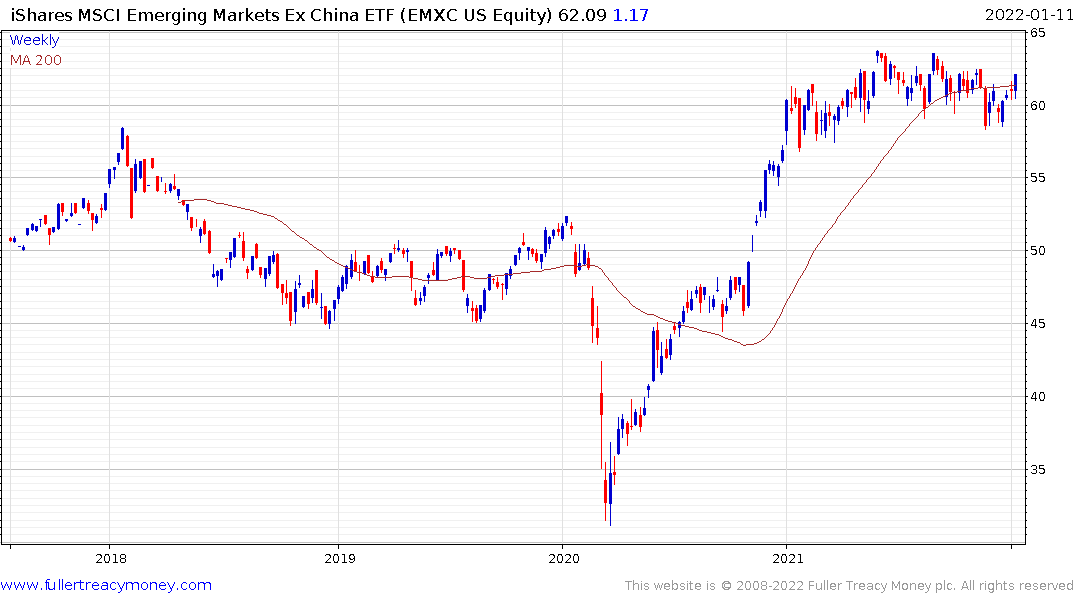 Since December 2007, commodity related currencies have been the worst performers. The Brazilian Real and Russian Ruble have both lost almost 70% of their value. The Mexican Peso and Indian Rupee lost almost half their value. If the outlook for growth and infrastructure development, green or otherwise, unfolds these currencies have scope to appreciate over the next decade which would be transformative for the returns from a foreign investor’s perspective. You even say they are BRIMing with potential.