"Same Old, But Not Old Same"
Comment of the Day

"Same Old, But Not Old Same" by Eoin Treacy

The trouble about this reasoning –convincing as it might be on the numbers- is that it is backward looking. The high inflation years of the 1970s (inflation averaged 7% during the decade) were caused by reckless monetary policy (much as now) allied to other unforeseen factors, the most powerful of which were the OPEC energy shocks, estimated to have been about 3.5%, or half of the 7%. This shock was totally unforeseen. It was what economists like to call an “externality”. An asteroid and Covid are of the same sort. Today we risk another shock, another externality. The global “Climate Emergency” will entail higher carbon prices (an additional cost of production), higher carbon taxes (all governments need them), massive infrastructure spending (to placate populist outrage against inequality), a burgeoning usage of copper, cobalt, lithium and iron ore (the essential components of the energy transition), as well as mandatory and voluntary conversion of households to the Energy Transition economy.

I very much doubt that 1.3% yield on the 10-year bond will compensate investors for this external shock. Watch this closely. It’s not in the chart.

The big difference between the oil shock and the increasingly powerful climate agenda is the former was a true externality. The oil embargos were an example of one group who were willing to ensure domestic pain in order to impose their will on the global economy, so they could get a better price for their exports.

How willing will Western governments be to limit economic potential in the short-term, to achieve their long-term goals of energy independence and a cleaner environment? The only way they can achieve that goal is through massive fiscal spending. The alternative would be a renewed populist revolution and no one wants that. The days of Europe abiding by fiscal austerity are over and not least as the Germany’s Green Party grows in power.

News last week from Taiwan Semiconductor suggests we are at the peak of supply inelasticity in the electronic components sector. That will remove a significant source of inflation from the market and will remove the kinds of dislocations that have resulted in the price of cars with more than 100,000 miles on the clock rising 25% in value in less than a year. 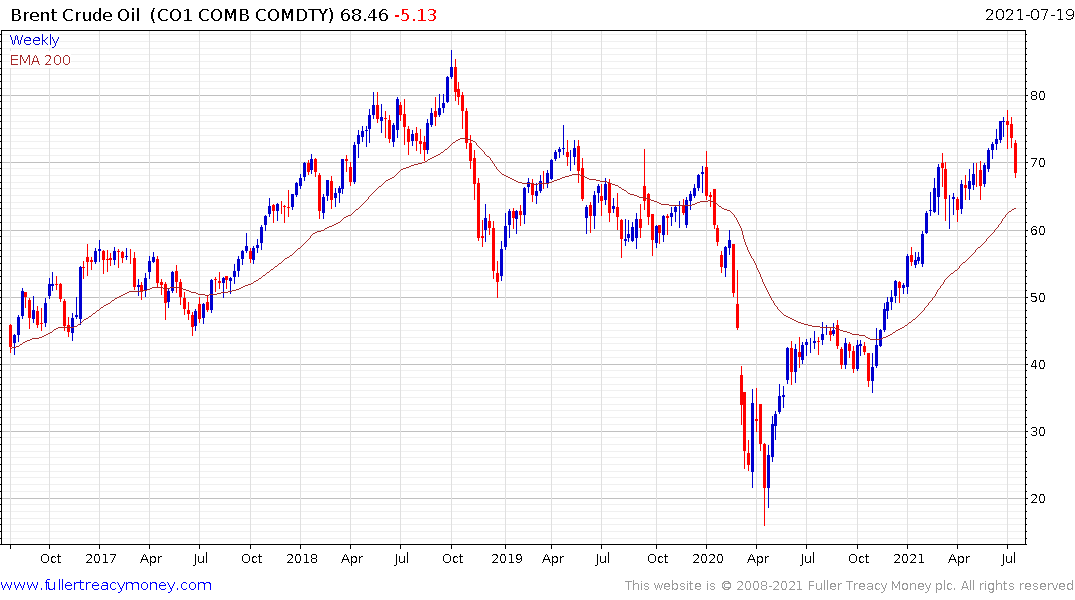 OPEC’s announcement of an additional 400,000 barrels a day of supply resulted in a kneejerk reaction from the oil price. It pulled back below the psychological $70 to dip into the underlying range. The odds are increasing that overhead resistance at $80 represents a medium-term barrier. 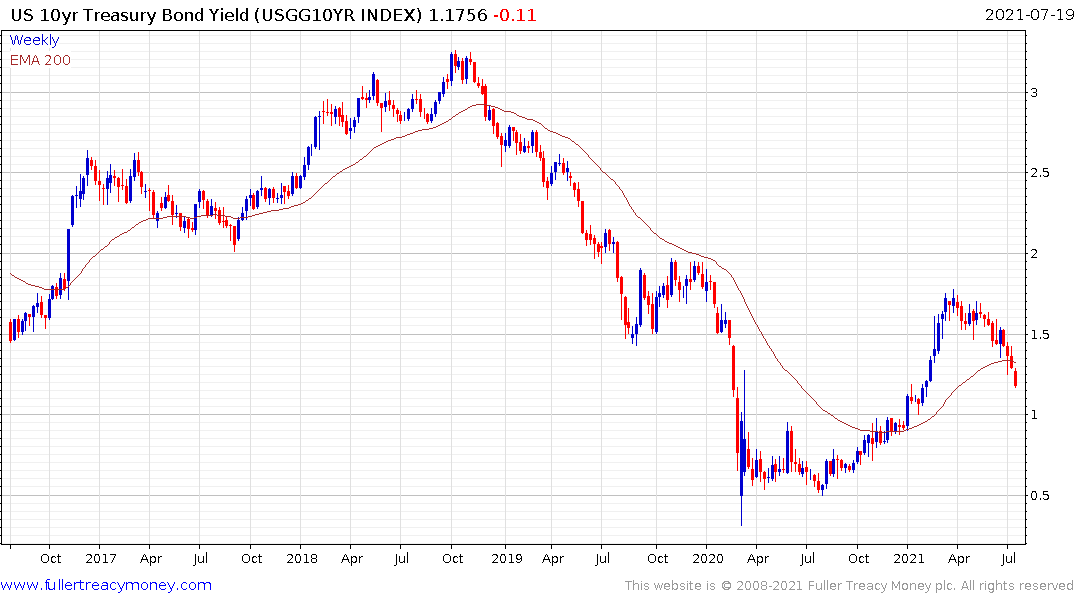 The significant compression in bond yields is pricing in the potential that inflation will surprise on the downside by the end of the year. 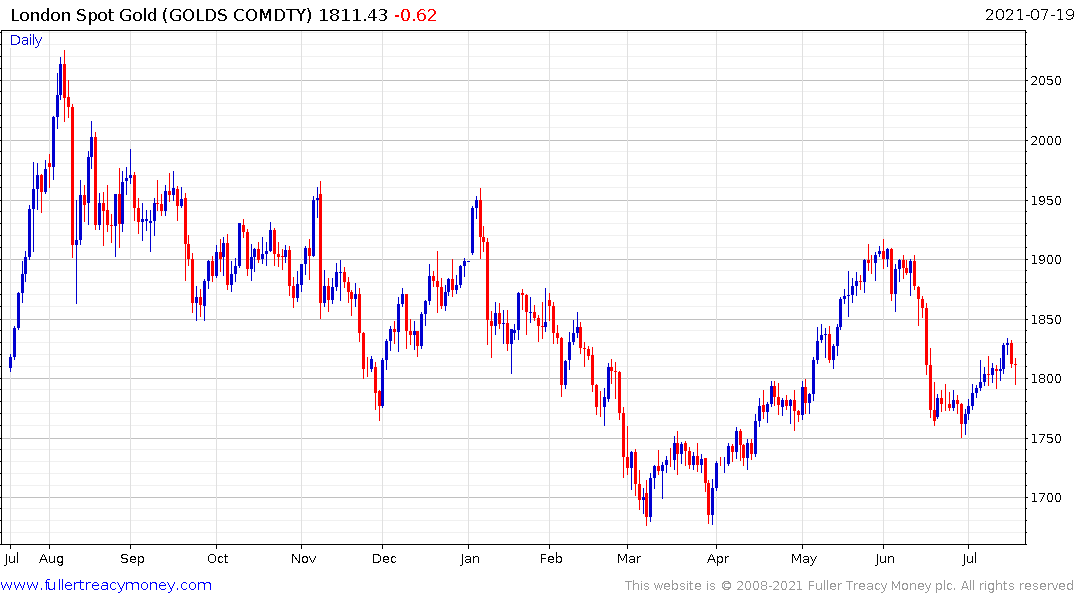 Ultimately, that’s good for the growth sector and also positive for gold. However, in the short-term there is significant risk of a mean reversion in the broad global stock market. 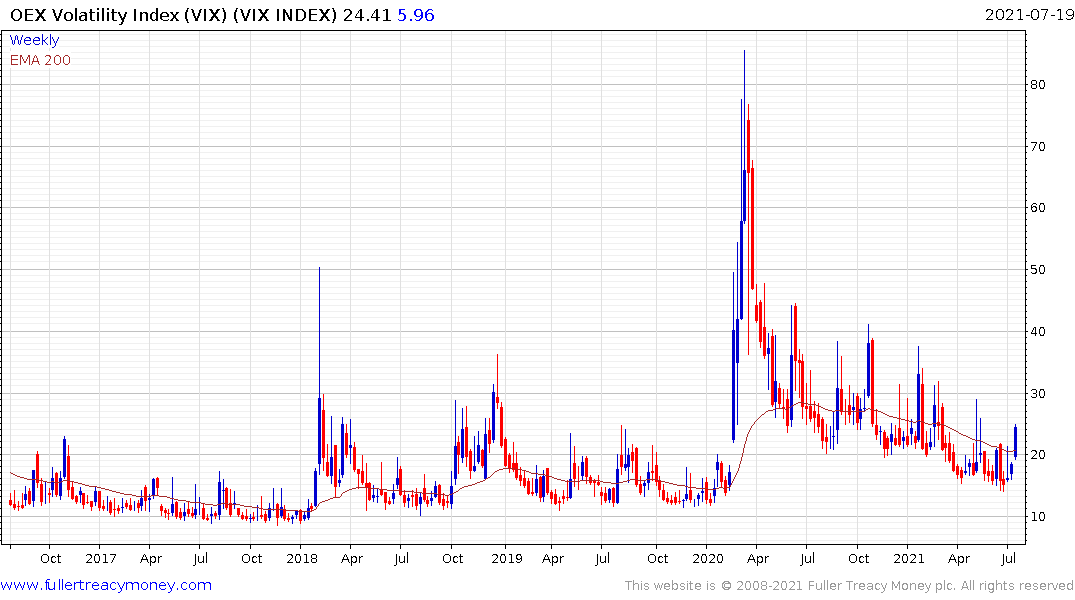 The VIX Index spiked higher today. Over the last year, these pops in volatility have not been sustained beyond a couple of days. Therefore, for the reaction to last more than a couple of days, volatility will have to continue remain elevated.