“India is on a 50-year rally,” even if there are short bouts of bear markets, Mobius said in an interview on Bloomberg Television. “India is maybe where China used to be 10 years ago,” he said, adding the government policies of unifying rules across states will help the country in the long run.

Mobius’ bullish view on India clashes with those of analysts at Morgan Stanley and Nomura Holdings Inc., who have downgraded the stock market after the benchmark S&P BSE Sensex Index more than doubled from a March 2020 low.

Emerging-market equities have trailed behind their developed-nation peers this year, held back by losses in China as the government has roiled markets with a widespread regulatory crackdown.

“People say emerging-markets look bad because China is dragging down the index, but they have to look at other areas such as India that are going up,” said Mobius…

Saying that India could be on a 50-year bull market is not incompatible with the risk of a reversion towards the mean which would correct the short-term overvaluation. 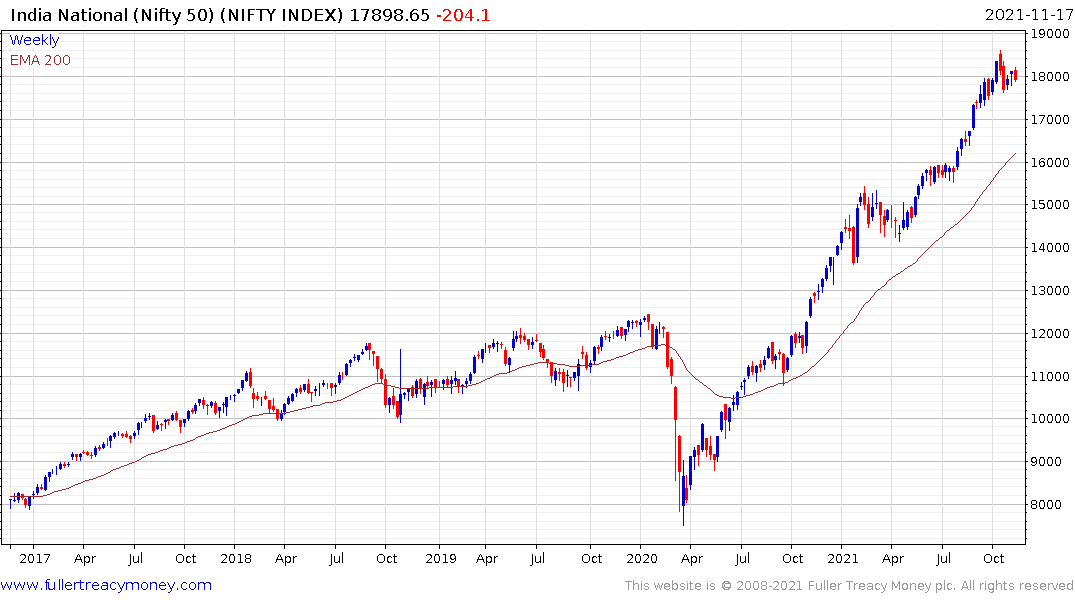 India represents a significant growth opportunity but is also subject to volatility. The Nifty Index remains in a reasonably consistent uptrend but is best bought following inevitable occasional setbacks. 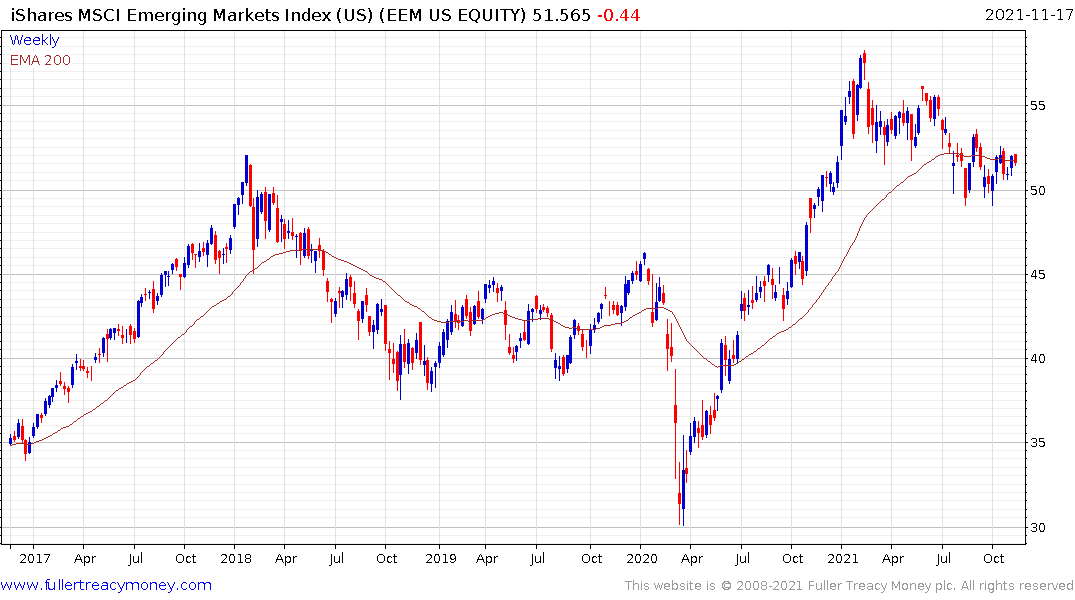 China’s influence on the emerging market universe is significant considering its 30% weight in the MSCI basket. The ETF is now firming from the upper side of the long-term range. 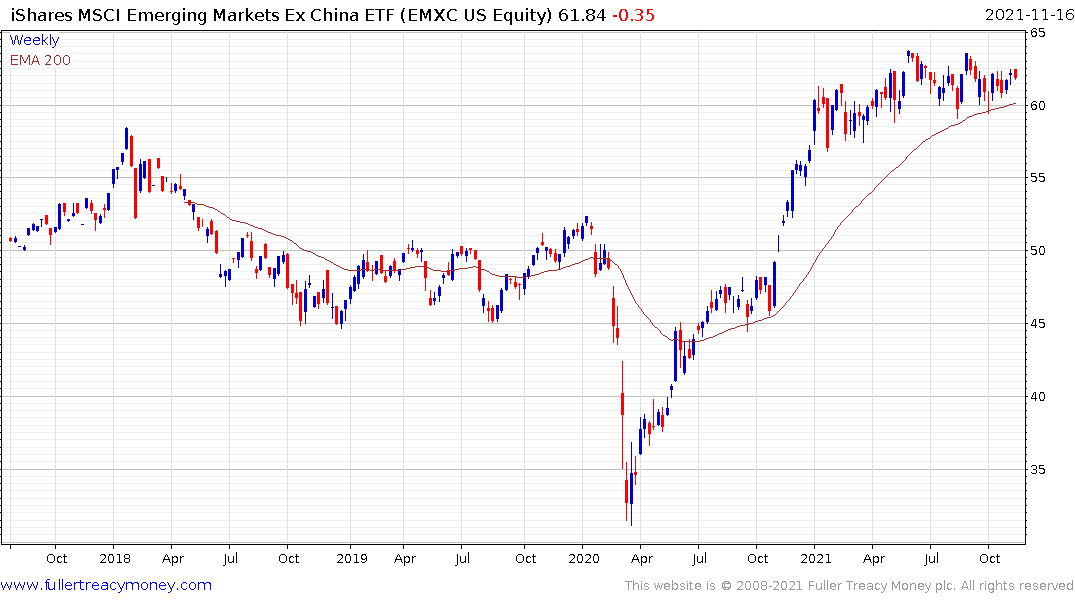 The ex-China basket has outperformed for much of this year and has been a bastion from uncertainty, arising from China’s political reorientation towards Xi’s new starting point…perhaps in advance of a “Leap”.

The one thing we can be reasonably certain of is political egos often triumph over fiscal responsibility. I know if I were Xi, I’d be gratified if the economy were humming when I am conferred with leadership for life. There are increasing signs that some of the tightest strictures on the property sector are easing, even if the go-go days are a thing of the past. 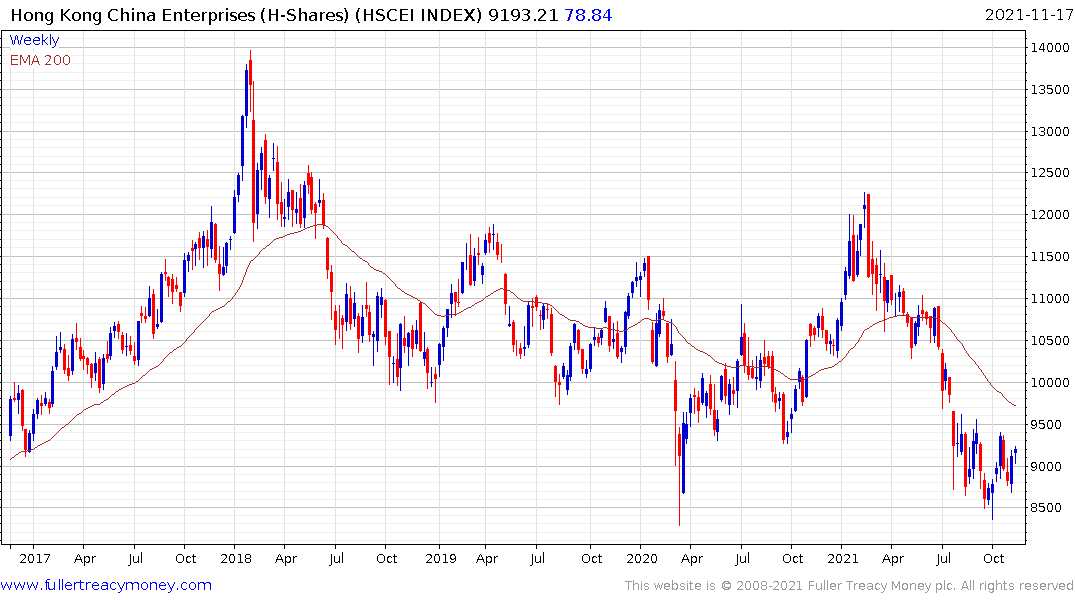 The Hang Seng China Enterprises Index (H-Shares) has posted a higher reaction low but will need to sustain a move above 9500 to break the sequence of lower rally highs and confirm a return to medium-term demand dominance.