Over the next decade, the Western Growers Association aims to automate half of the harvest of specialty crops, which include fruits, vegetables and nuts. A Florida company has been developing a strawberry-picking robot. At Washington State University Tri-Cities, scientists are working on an apple-picking robot — an idea some farmworker advocates met with skepticism.

Edgar Franks, political director at the union Familias Unidas por La Justicia, based in Burlington, Washington, said that, generally speaking, the rise of automation is concerning. Farm work is grueling “because of the exploitation of labor,” he said.

“From our point of view, it’s all about labor control and cutting labor costs down…What’s going to happen to the workers who made the industry so profitable, all of a sudden to be kicked out?” Franks said.

Myers said it has become more difficult to hire people for work like weeding. This year, 80% of the migrant workers he planned to hire on temporary H-2A visas are delayed at the U.S.-Mexico border, he said.

“It’s harder to find people to do that work every single year,” he said.

Mikesell declined to provide an exact cost of the robot, but said its price is in the hundreds of thousands of dollars, comparable to the cost of some tractors.

The weeding robot, manufactured in Mukilteo, uses GPS technology to stay within a geofence at the edge of the field. Cameras underneath the robot scan the ground and artificial intelligence identifies the weeds among the crops.

Then a carbon dioxide laser (the same kind used to cut metal) “targets the weeds for destruction,” in the words of the company’s website. The company says the machine can weed 15-20 acres per day.

Developing the machine meant troubleshooting to ensure that the lasers and robot could withstand hot and freezing temperatures, plus rain, dust and lightning – to match the “general ruggedness of farm equipment,” Mikesell said.

Unskilled heavy labour is often performed by uneducated migrant workers. The necessity of this work has been a cornerstone of immigration policy in many parts of the world for a long time. If there is no longer a need for large numbers of people to tend crops the route to entry to many countries is likely to become tighter over time.

Bayer bought Monsanto because they believed it was a bargain and that the cost of dealing with RoundUp litigation would be manageable. I doubt they thought for a moment that the market for chemical solutions to weeding would ever be threatened. If lasers can zap weeds and the machines can pay for themselves in a couple of years, the market for weedkiller is now more competitive than it has been in years. The evolution of vertical farming is an additonal threat to their agriculture business model. 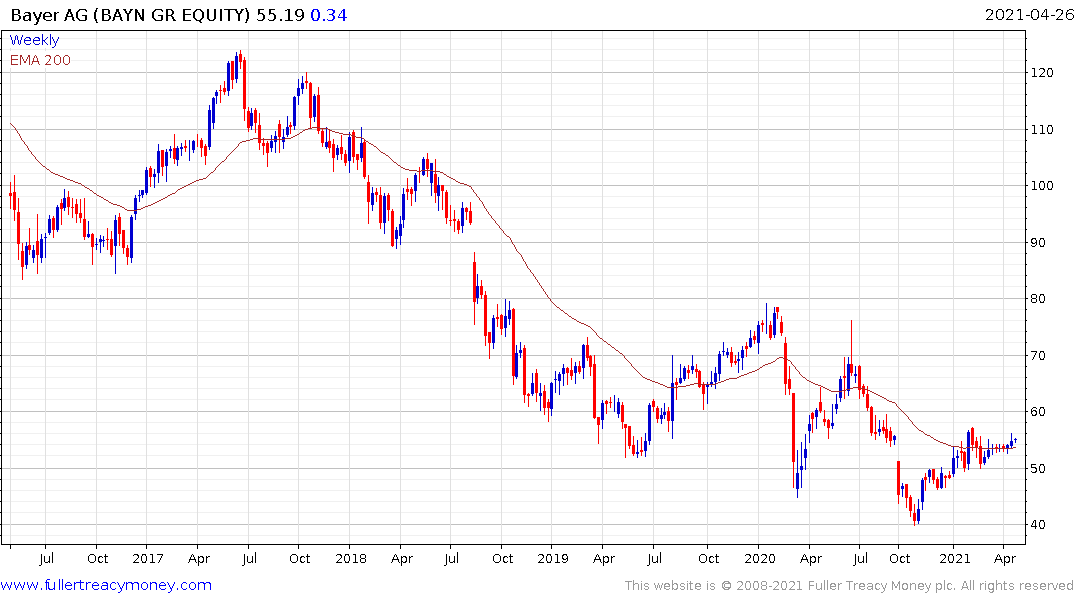 Bayer’s share continues to pause around €50 and is going to have to lean on its pharmaceuticals and cosmetics businesses a little heavier in future to drive growth.