One of those investments was the 2009 purchase of Cyber Power Group Ltd. for $77.6 million, a company that makes polysilicon, the main raw material in solar cells. Yingli’s founder and Chief Executive Officer Miao Liansheng invested another $270 million to upgrade the plant. The project made more sense then, when the material sold for $400 a kilogram; today, it can be bought for less than $20, said Angelo Zino, an S&P Capital IQ analyst in New York.

Yingli spent aggressively on marketing as well, including sponsoring the World Cup. Its logo was prominent during matches in Brazil last year. “They spent on capacity, they spent quite a bit on marketing,” Sanganeria said. “They took everything to the extreme.”

Suntech and Q-Cells faced similar issues, borrowing to expand capacity and then finding themselves constrained by debt, said Raymond James’ Molchanov. Both struggled to cut manufacturing costs fast enough to keep up with the market. The challenge was exacerbated starting in 2011 when slowing demand in Europe led to a global oversupply of panels and falling prices.

The problem for solar cell manufacturers is that the primary bullish case for solar is that Moore’s law can now be applied because it is a technology rather than an extractive resource. This means companies relying on producing legacy products, when technology is advancing rapidly are being left behind and often with high debt loads.

It is no longer enough to be a low cost producer. Companies also need the capability to innovate their manufacturing so they can keep pace with the speed of technological innovation. The low price of oil also represents a headwind not least as utilities and homeowners look at the comparative advantages of installing cells and home battery systems. Against this background it is little wonder that there is wide disparity in the performance of shares in the solar sector. 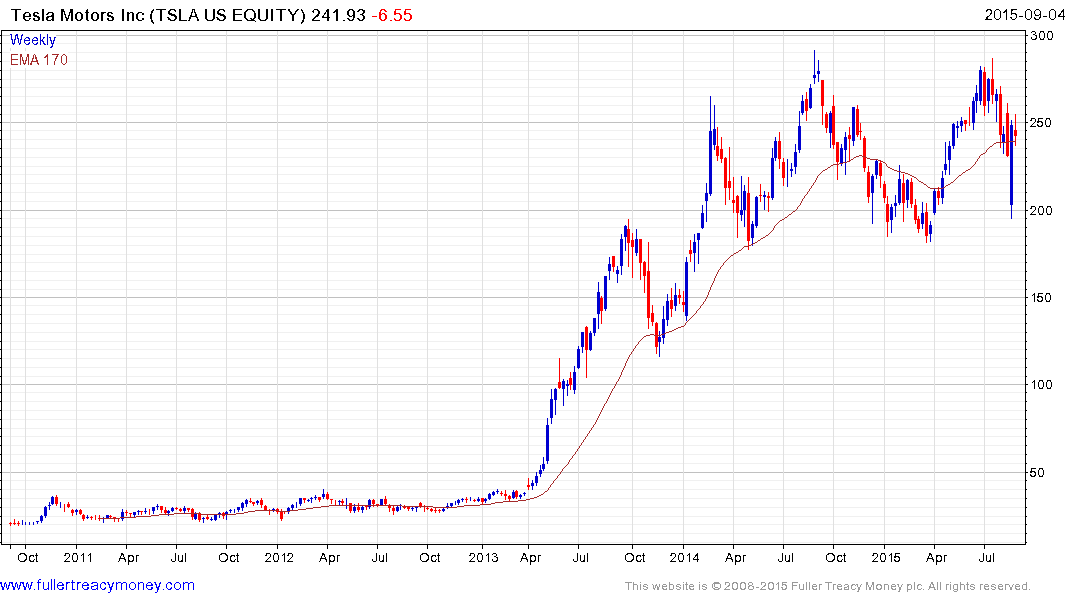 Tesla’s home battery has the potential to be truly transformative for the solar sector because it can act as an enabler for greater self-sufficiency. While the company garners many more headlines for its cars than batteries, it’s primary focus is on the latter. The share has been ranging between $200 and $300 since last year, following the announcement of major capital expenditure on its ‘giga-factory’. A sustained move below $200 would be required to suggest a move to supply dominance. 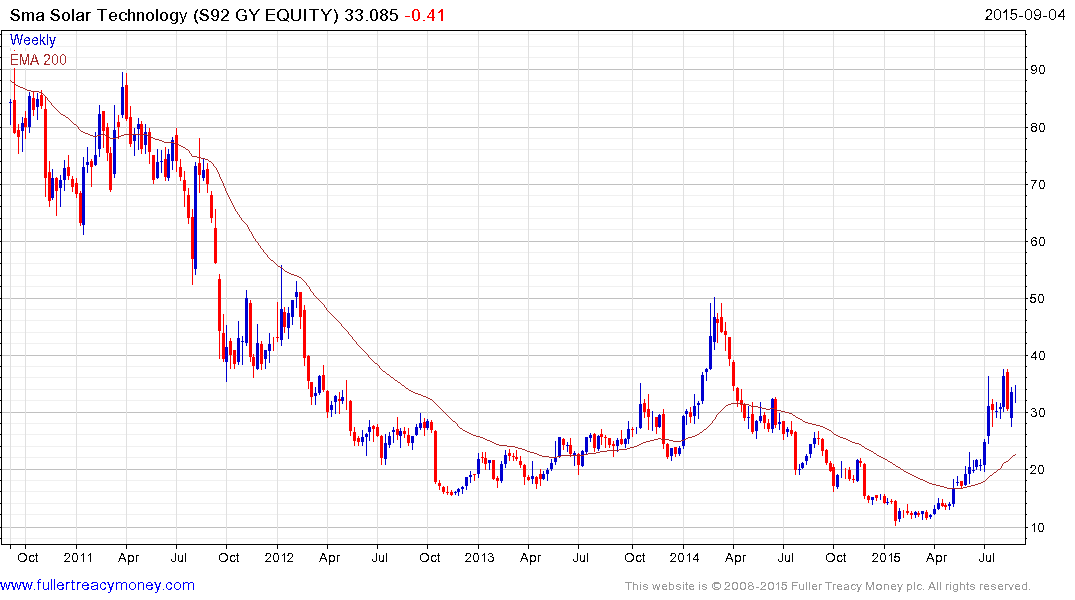 German listed SMA Solar Technology is a leader in supplying solar inverters and has its own home battery solution. The share continues to hold a progression of higher major reaction lows and a sustained move below the 200-day MA would be required to question medium-term scope for additional upside. 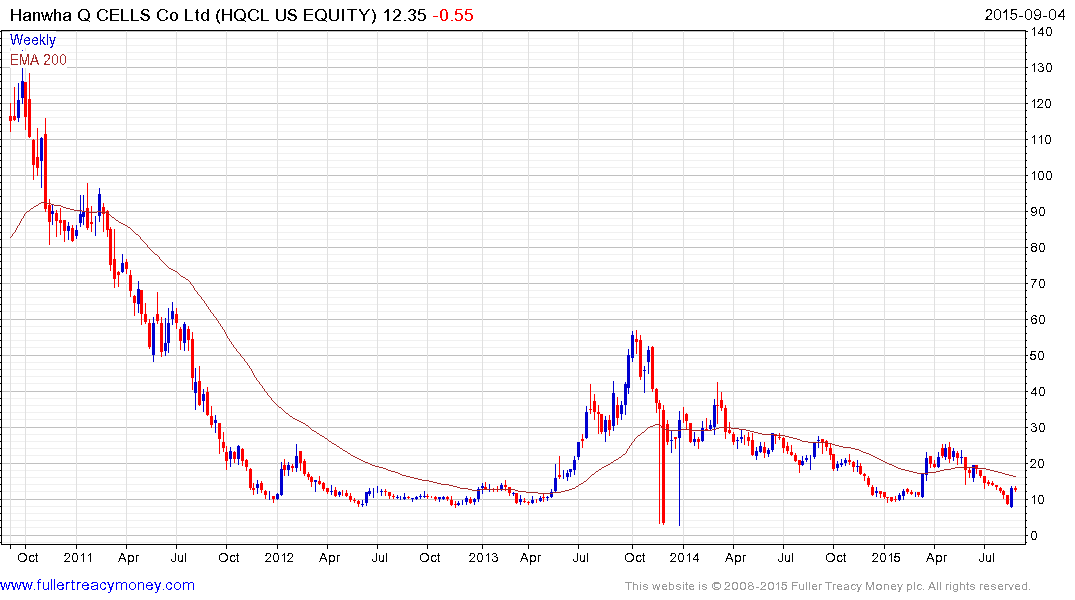 Hanwha Solar’s US listed ADR posted a large upside weekly key reversal two weeks ago. The $10 level has offered support on numerous occasions since 2012. A sustained move below that level would be required to check potential for additional higher to lateral ranging. 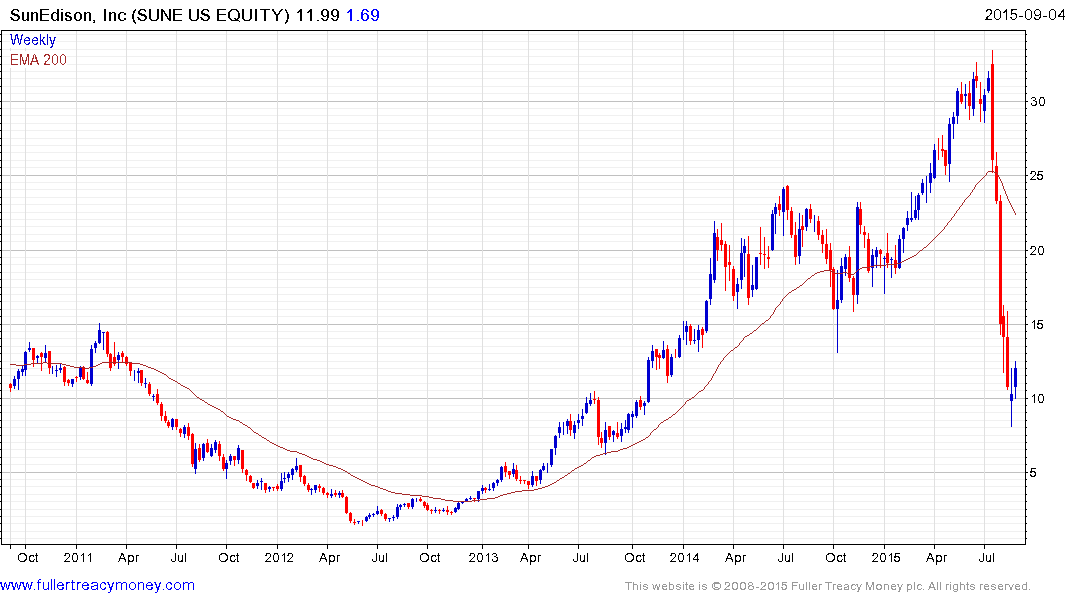 SunEdison experienced a deep correction from its July peak but has found at least near-term support in the region of $10 and will need to hold the low on the first significant pull back to demonstrate a return to demand dominance beyond a short covering bounce. 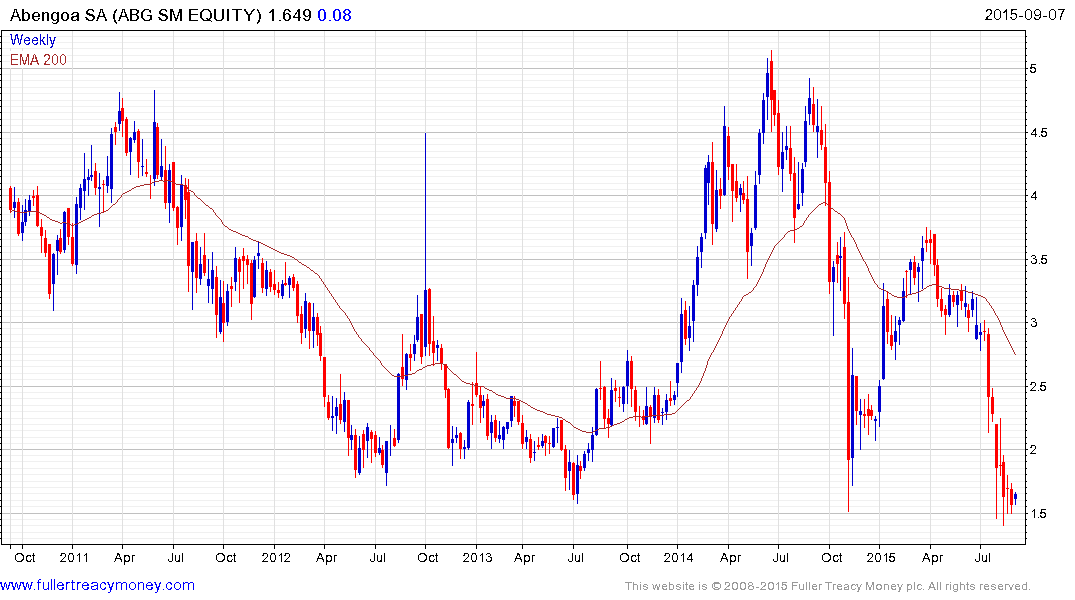 Spanish listed Abengoa is also back at a potential area of support following a steep decline.