“The bulls can take it to around $105 before running into resistance,” said Gene McGillian, an analyst and broker at Tradition Energy in Stamford, Connecticut. “The bulls are in control of the market. A lot of the strength we’re seeing is predicated on the narrowing of the WTI-Brent spread.”

Brent crude is becoming a “broken benchmark” for the global oil market because of declining supplies from the North Sea, Citigroup Inc. analysts said in a report dated yesterday.

Cushing stockpiles dropped 4.23 million barrels in the two weeks ended Feb. 8 as the southern leg of TransCanada Corp.’s Keystone XL pipeline moved oil to the Gulf Coast of Texas from the hub.

While there is still a ban on crude oil exports within the USA there is no such ban on distillate products. Since WTI still trades at a discount to other global benchmarks, US refiners can probably produce higher value products at more competitive prices than their European competitors. The opening of the southern portion of the Keystone pipeline is probably helping to facilitate refiner demand for crude which could be helping reduce the discount of WTI to Brent. 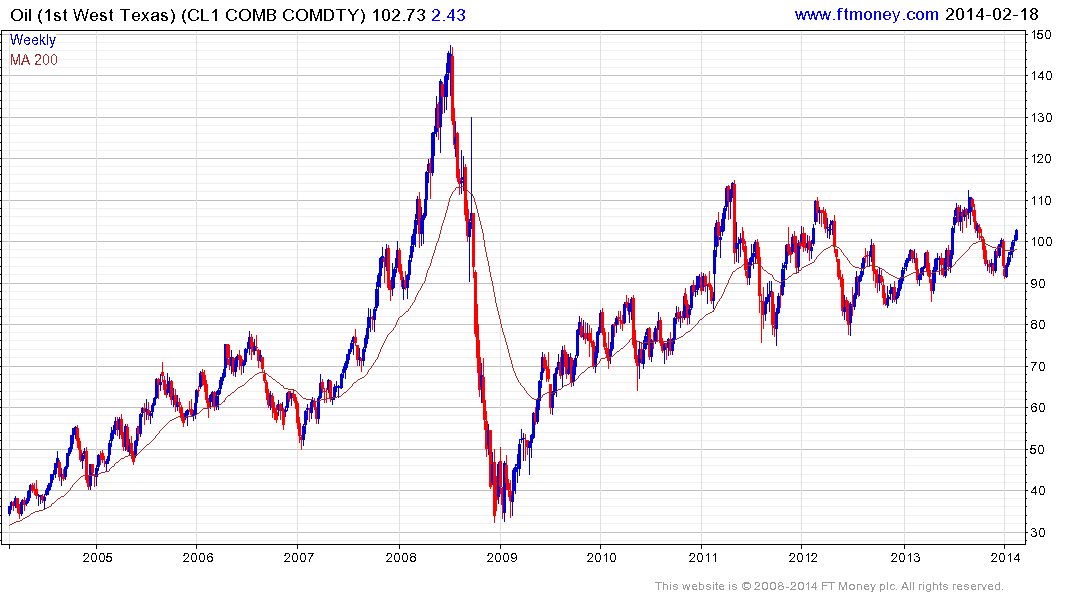 West Texas Intermediate has held a progression of higher reaction lows within its three-year range and is currently rallying towards the upper boundary. It pushed through the psychological $100 area today and a clear downward dynamic will be required to check momentum as it approaches the upper side of its lengthy congestion area.