What's Happening to US Shale Production?
Comment of the Day

What's Happening to US Shale Production? by Eoin Treacy

In our view, the next twelve months will be a critical test of the US oil shales. Our models tell us the remaining inventory of prime Tier 1 drilling locations is much less than widely believed. While many analysts believe the shales are capable of producing a near-limitless volume of crude, we know this is not the case. The shales must now contend with a large base of existing legacy production that relentlessly declines and must be replaced. We have seen how sensitive net shale production growth can be: a slight slowdown in productivity gains combined with a slight uptick in the base decline rate can very quickly take production growth from record rates to near-flat production in a matter of months. None of these pressures show any signs of letting up and now the rig count has started to materially decline. We expect production growth to slow even more from here as a result.

We want to once again emphasize how important the US shales are to global oil balances. We first published Table 1 in our Q2 2018 letter. The table clearly shows that conventional non-OPEC oil production outside of the US and Canada has declined by almost 130,000 b/d each year over the past decade. The fact that conventional non-OPEC oil production has rolled over is a huge problem that has received little attention by oil analysts. To put this in perspective, conventional non-OPEC oil production still represents 45% of global oil production and now appears to be in sustained decline. Furthermore, if you include other sources of non-OPEC production, such as Canadian Oil Sands (which is not considered “conventional”), biofuels, refinery gains, and OPEC NGLs (which are not part of the OPEC quota systems), the US shales still represent an enormous 75% of the total non-OPEC liquids growth over the last decade. Now that the Bakken and Eagle Ford are facing exhaustion issues that are readily becoming apparent, nearly all of non-OPEC’s production growth will have to come from just one play in West Texas–the Permian. Never before has the global oil industry been so dependent on one field in such a concentrated geographic area for all of its future growth. What happens in the dozen counties that make up the Permian will make or break the global oil market over the next 10 years.

The unconventional revolution in oil and gas production took off, the most promising locations were drilled first. The challenge from the beginning with unconventional wells is their prolific initial production followed soon after by an early peak production profile. That requires constant drilling to sustain production growth. If you stop drilling the peaking of existing wells catches up and production falls.

That challenge is compounded by the fact the most attractive locations have already been drilled and many others are off limits because they reside inside state owned land or in states that have adopted an antagonistic attitude to drilling. Refracking remains an emerging solution to the problem of “high grading” because it is possible to go back over existing ground and engage in additional fracturing to release additional production. The challenge with this strategy is care needs to be taken not to damage the resource base which would impede future production measures. 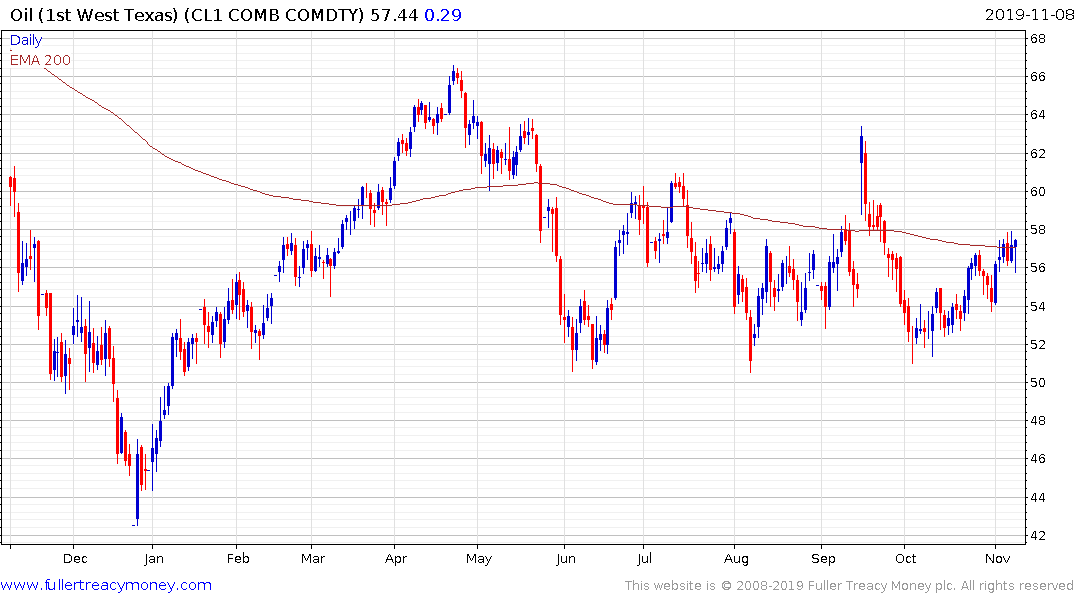 The biggest challenge for the sector is unconventional supply is expensive compared to conventional supply and is therefore more price sensitive. West Texas Intermediate continues to firm from the $50 area and reversed an earlier decline today to close in positive territory. The higher the price goes the less worrisome the above issues will be because more supply will be unlocked. 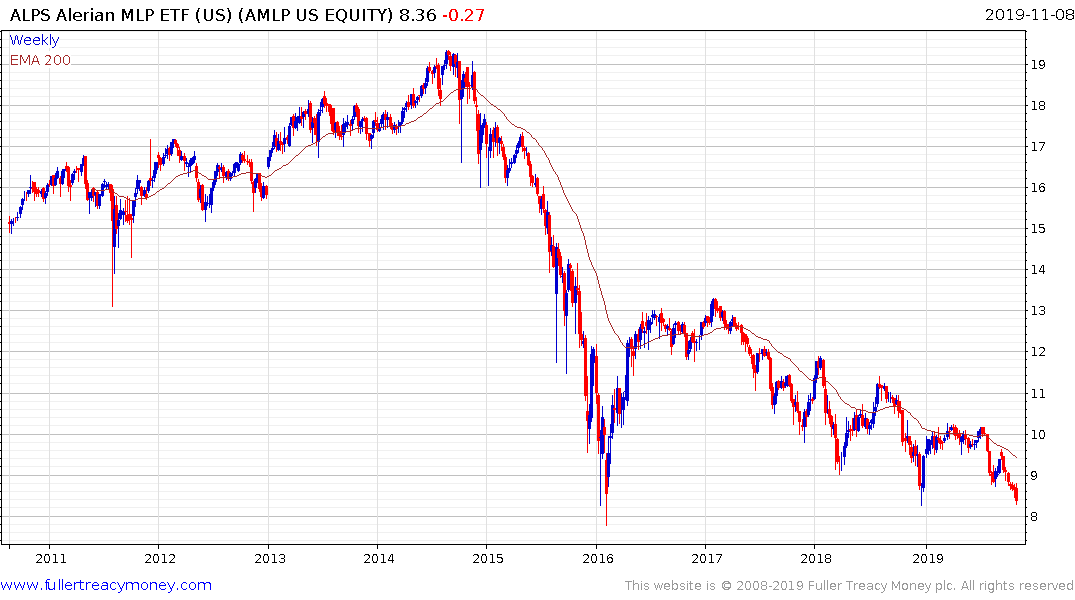 The Alerian MLP ETF is back testing its lows from earlier this year and 2016. It took some of the flak from the troubles Chesapeake has found itself in but if oil prices firm from here, that is likely to act as a bullish catalyst.