Each turbine is expected to deliver around 80 GWh of energy per year, depending on site-specific conditions, which is said to work out as being enough to power 20,000 European homes.

The V236-15.0 MW also offers the potential to reduce the number of turbines deployed at offshore windfarm level – with Vestas calculating that the "offshore turbine offers 65 percent higher annual energy production than the V173-9.5 MW, and for a 900-MW wind park it boosts production by five percent with 34 fewer turbines."

The company expects the first V236-15.0 MW prototype to be built in 2022, with serial production following two years later. It has a design lifetime of 25 years.

“With the V236-15.0 MW, we raise the bar in terms of technological innovation and industrialization in the wind energy industry, in favor of building scale," says Anders Nielsen, Vestas CTO. "By leveraging Vestas’ extensive proven technology, the new platform combines innovation with certainty to offer industry-leading performance while reaping the benefits of building on the supply chain of our entire product portfolio. The new offshore platform forms a solid foundation for future products and upgrades.”

Boosting production and needing to build fewer towers suggests there should be cost savings in construction. The big change in renewable energy occurred in late 2019 when economies of scale improved enough that the wind and solar sectors could survive without subsidies. That has led to a complete reappraisal of the rationale for investing in the sector. More recently it has allowed the renewable energy sector focus on the subsidies provided to fossil fuel companies across the energy supply chain. 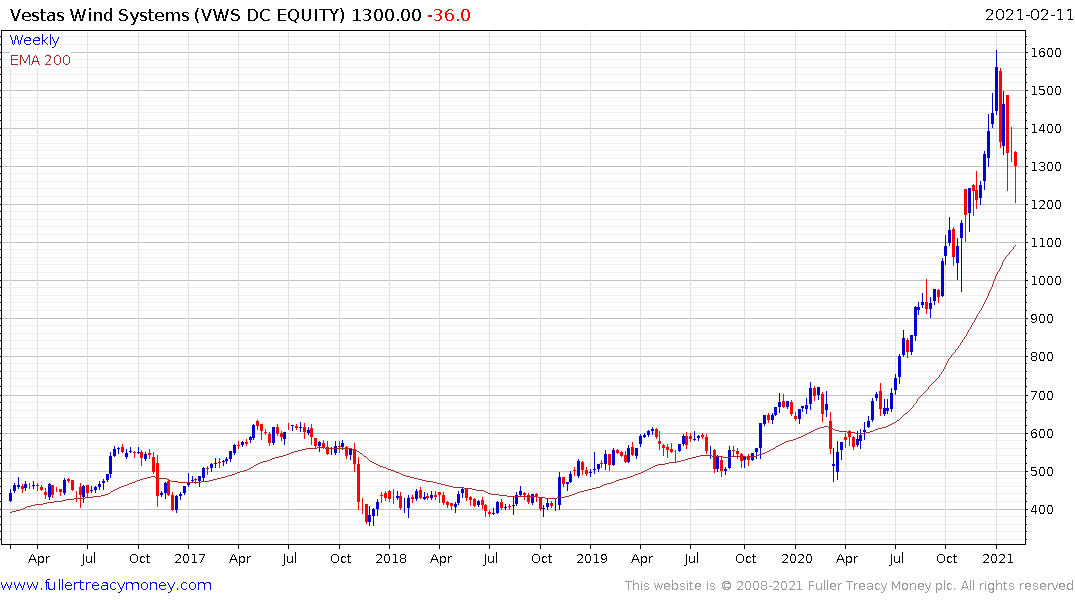 Vesta Wind unwound about half its overextension relative to the trend mean and firmed this week from the DKK1200 level. 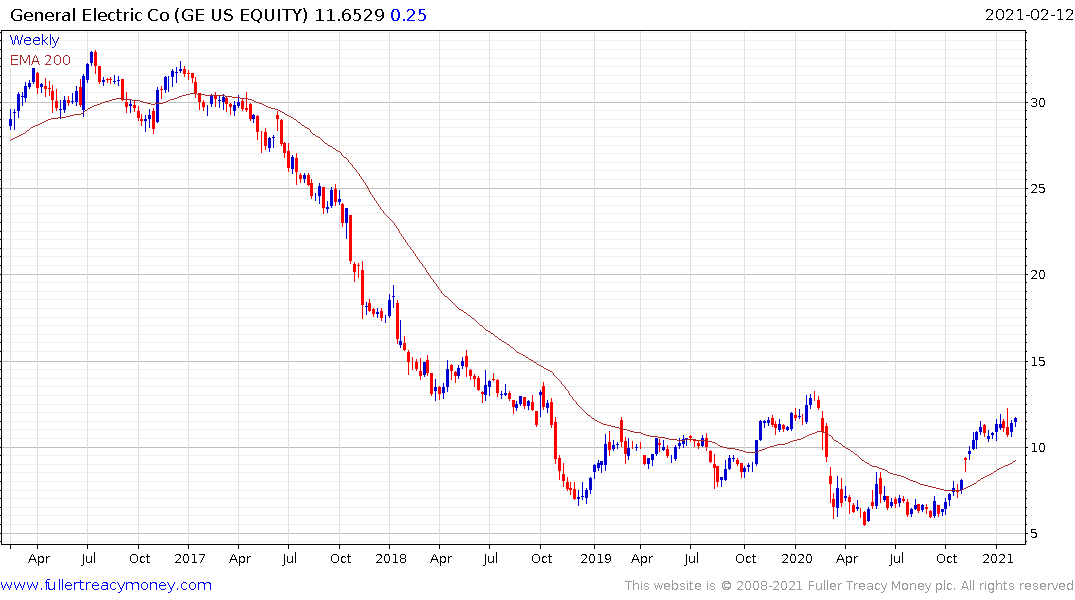 General Electric has contracted back to its industrial roots with renewables representing about a fifth of revenue. The share continues to firm within its evolving base formation.

This report from Goehring & Rosenzweig makes the argument that massive investments in wind, solar and batteries will not succeed in reducing carbon emissions. The reality is it doesn’t matter. The whole carbon emissions topic is a red herring from a business perspective and only damages fossil fuel companies. If renewables can prosper without subsidies, they will be adopted by energy importers everywhere.

The bullish argument as it relates to oil is not about rising demand. There will be a rebound in demand over the next year as the global economy opens up. Economic activity will increase and people will realise we all still need oil and that is likely to remain the case for the lengthy medium term.

Back in August Apple’s market cap briefly exceeded that of the entire Russell 2000. The condition was unsustainable and small caps have since rebounded in a big way.

In early January Tesla’s market cap exceeded that of the entire S&P500 Energy sector and it is still holding that valuation. However, it is reasonable to expect that the massive underperformance of energy will be unwound. This article from Dylan Grice makes a similar argument to the G&R report.

However, there is no shortage of oil. There is plenty of additional supply to bring online as the price improves. Bear markets are about supply destruction. The highest cost producers go bust. That’s how every bear market eventually ends. Investment in new supply contracts for prolonged periods until supply and demand come back into balance. At that point the stage is set for a new bullish story. 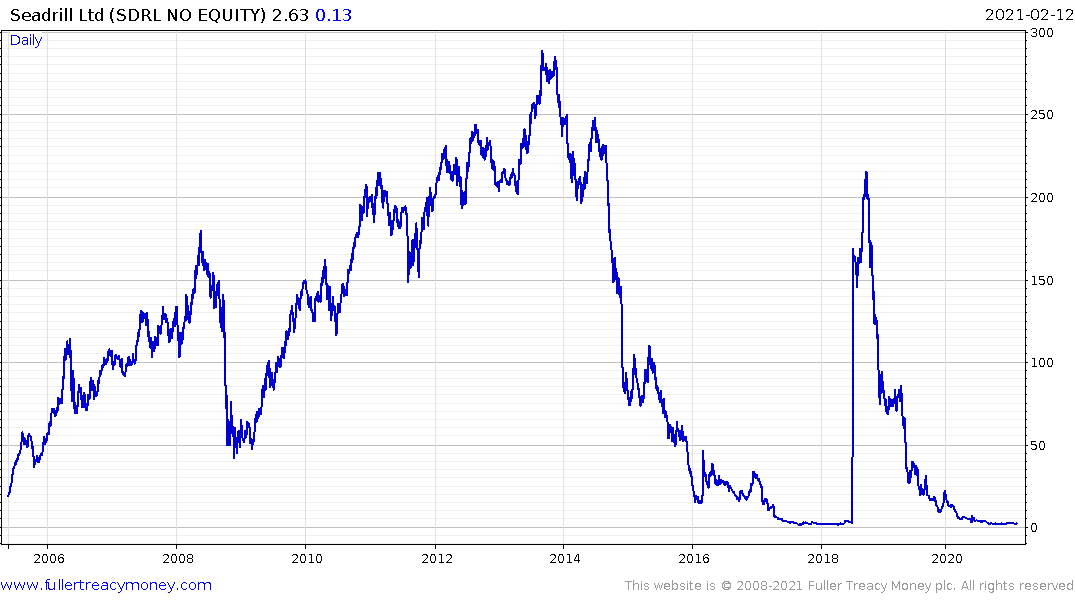 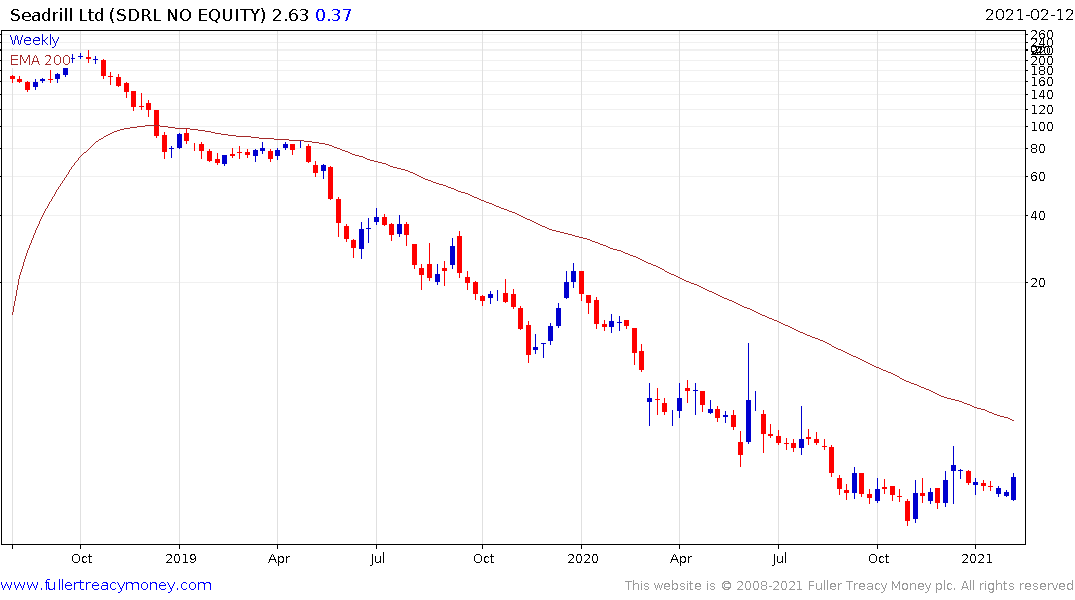 Offshore oil supply has been the big casualty of this bear market to date. Seadrill came out of bankruptcy in 2018, fell 98% from the relisting price and filed for bankruptcy protection again on Wednesday. If it can survive through forbearance maybe they can reinvent themselves as offshore wind turbine installers.

These kinds of events are positive for the rebalancing argument. However, the shale sector will weigh back in with additional drilling programs when they can hedge at attractive rates. With interest rates so low and liquidity so abundant they will have no issue raising capital. I strongly believe the big bull story in the emerging commodity secular bull market will be in copper, lithium, nickel and cobalt. Meanwhile oil shares represent a potential trading opportunity at this valuation. 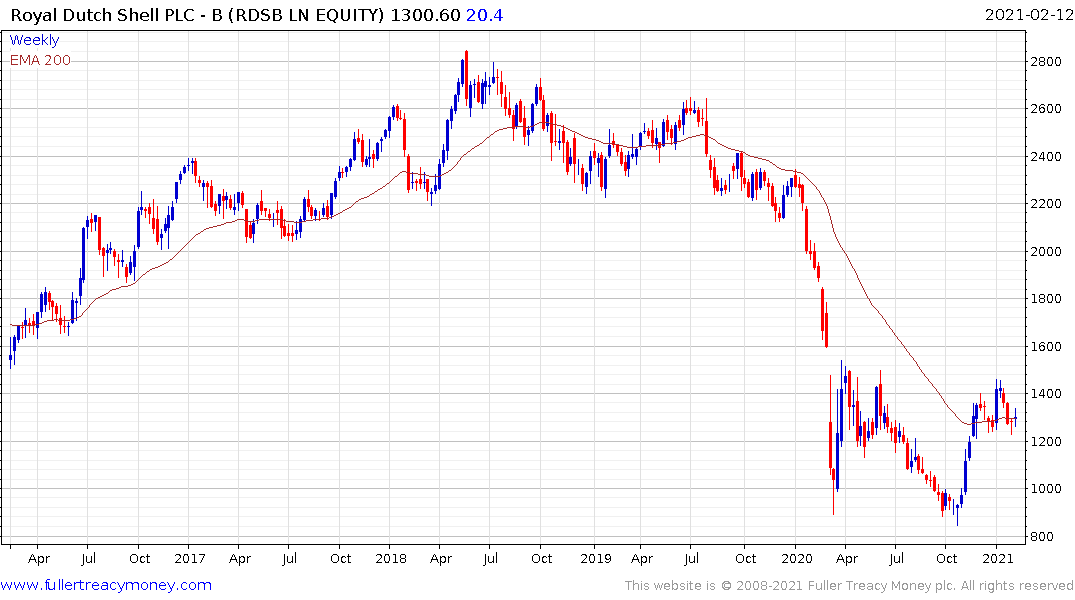 Royal Dutch Shell, for example, continues to firm from the region of the trend mean. 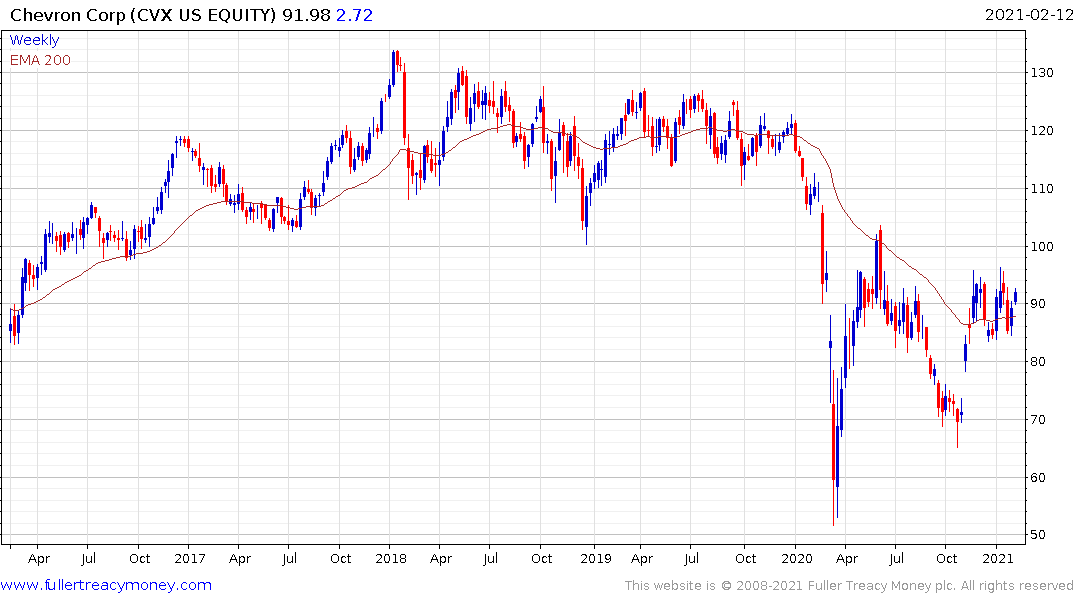