At this time last year, we thought 2014 U.S. natural gas prices would average $3.75/MMBtu. We still think prices will average $3.75 in 2014. Yes, we know the 2014 gas futures strip has surged well above $4.00 as cold weather has drawn inventories sharply lower. In fact, the recent surge in the year-over-year gas storage deficit to more than 500 Bcf has driven gas prices so high that we are increasing our 1Q14 forecast to $4.15/MMBtu. But we cannot assume that colder-than-normal weather will continue through the remainder of winter. Therefore, we remain of the view that strong U.S. gas supply growth will outpace slowly improving gas demand over the next two years. Specifically, we are looking for Henry Hub to average $3.75/MMBtu for both 2014 and 2015. Obviously, weather will continue to drive volatility, but the fundamentals suggest U.S. gas should trade mostly between $3.25 and $4.25. Beyond 2015, faster expansion of natural gas-consuming infrastructure in the U.S. should allow gas prices to slowly drift higher. Our long-term U.S. gas price deck remains $4.25/MMBtu.

The natural gas market has been subject to quite considerable volatility over the last few weeks as cold weather has resulted in a surge in demand. However, while one would normally expect to see prices rise in such circumstances, the extent of volatility suggests that the market is quite a bit tighter than many might previously have expected 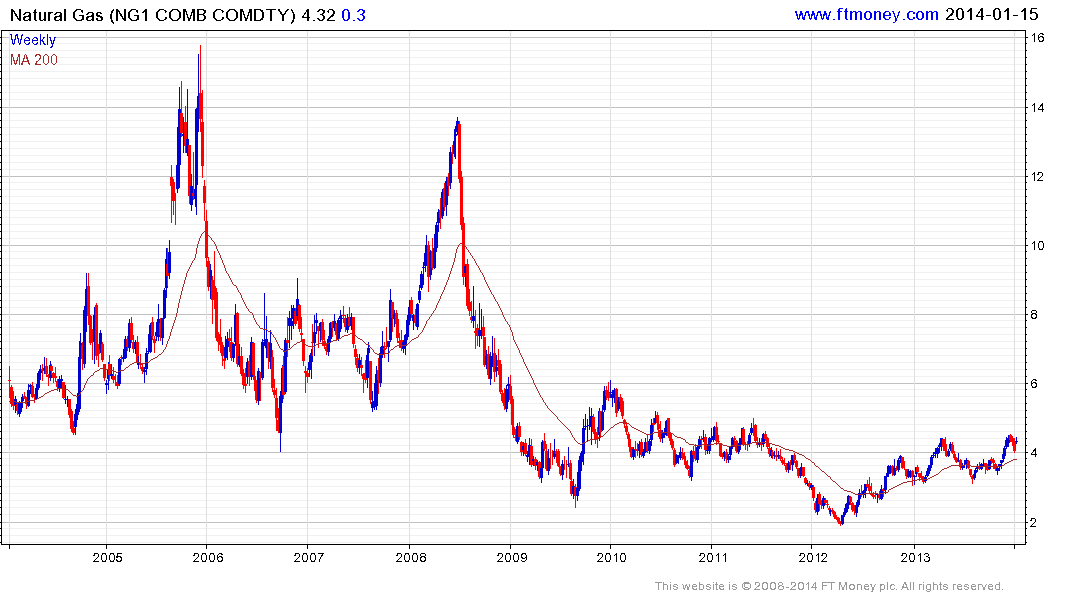 Natural gas prices had been depressed, not least when compared to other energy sources, as supply surged from what were once considered unconventional sources. The result was that supply overwhelmed demand and prices declined. This created a demand response as anyone who could began to migrate to the cheaper commodity. It also created a supply response where drillers migrated to liquids rich plays that offered higher margins. The oversupply that has depressed pricing has been chipped away from both sides over the last few years.

$4 has often been referred to as a level where a substantial quantity of additional supply becomes economically viable, so significant additional upside from this area will probably be dependent on demand growth. However, since prices have been ranging with an upward bias for more than year, we can also conclude that the supply surplus which had previously held prices below $4 has been eroded suggesting that surprises are more likely to be to the upside in future.