U.S. Infrastructure Plan May Lift These Three Brazilian Stocks
Comment of the Day

Two weeks ago, Biden unveiled a $2.25 trillion plan to overhaul the country’s physical and technological infrastructure. He has said the plan needs to go far beyond bridges and roads and has called for investment in electric vehicles, renewable power and the electric grid.

Shares of Gerdau and Tupy are up 27% and 15% this year, respectively, while the benchmark Ibovespa index is down 0.6% and Weg is little changed.

“Limited geographical diversification puts a cap on Brazilian companies seizing this moment, but we can see some clear winners,” the analysts said. “Although we believe they have not gone unnoticed by the market, recent performance indicates that the impact is likely larger than what is currently priced in.”

Brazil is currently dealing with the challenge of rising pandemic case numbers and deaths. That’s a near-term challenge for the economic recovery and it might be a few months before the worst is over.
The iShares Brazil ETF is firming from the region of the 200-day MA but has lagged the rebound seen in other global markets.

Companies with solid overseas earnings are outperforming at present. Since the materials and resources sectors are Brazil’s big exporters, they are well placed to weather this domestic crisis.
A subscriber kindly highlighted the positive tone of Gerdau’s latest conference call. The ADR is in the process of completing a multi-year base formation. 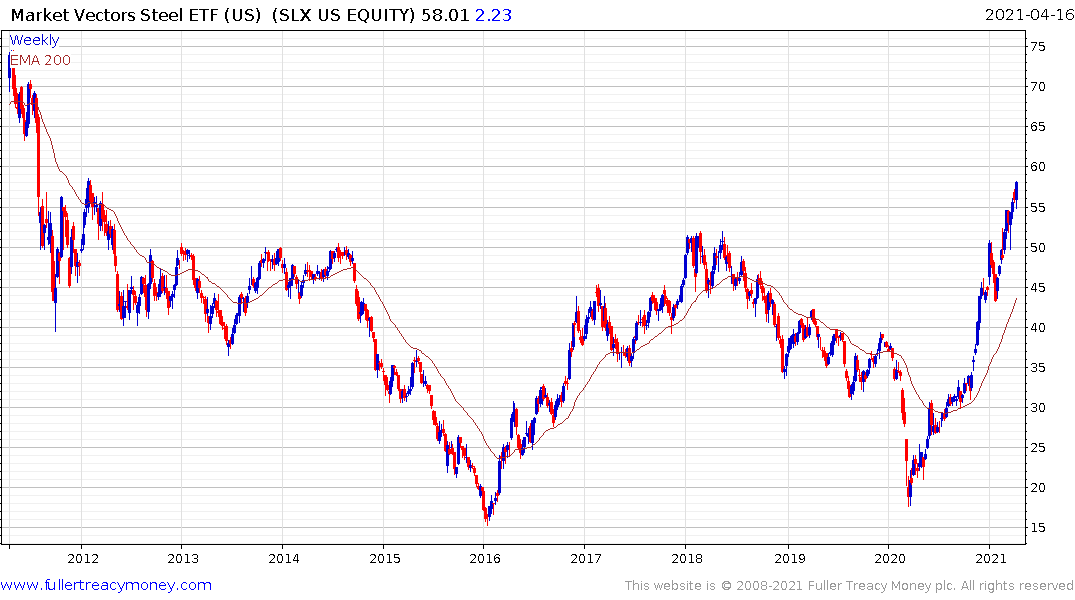 The VanEck Vectors Steel ETF completed an eight-year base formation in February and continues to extend the advance.

If steel and iron-ore companies are doing well, it is reasonable to expect demand for metallurgical coal to also improve. Arch Resources is currently firming from the region of its trend mean. 44.5% of production is metallurgical coal with the remainder being thermal. 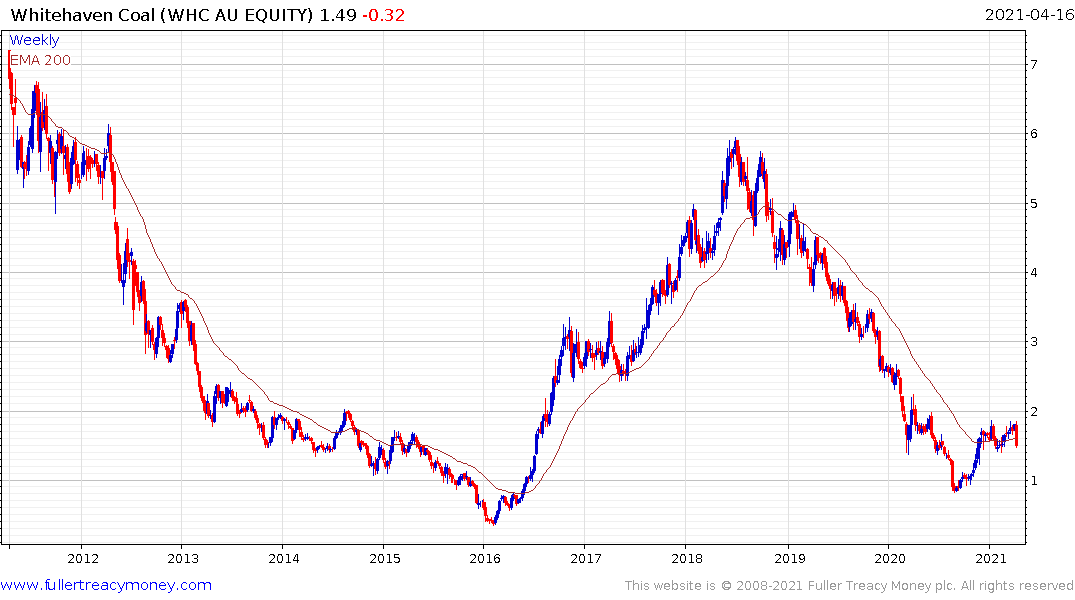 Whitehaven Coal pulled back extremely sharply over the last two days following production cuts and negative guidance. With only 18.6% of production coming from metallurgical coal, the company faces stiff headwinds from the Australian green lobby. 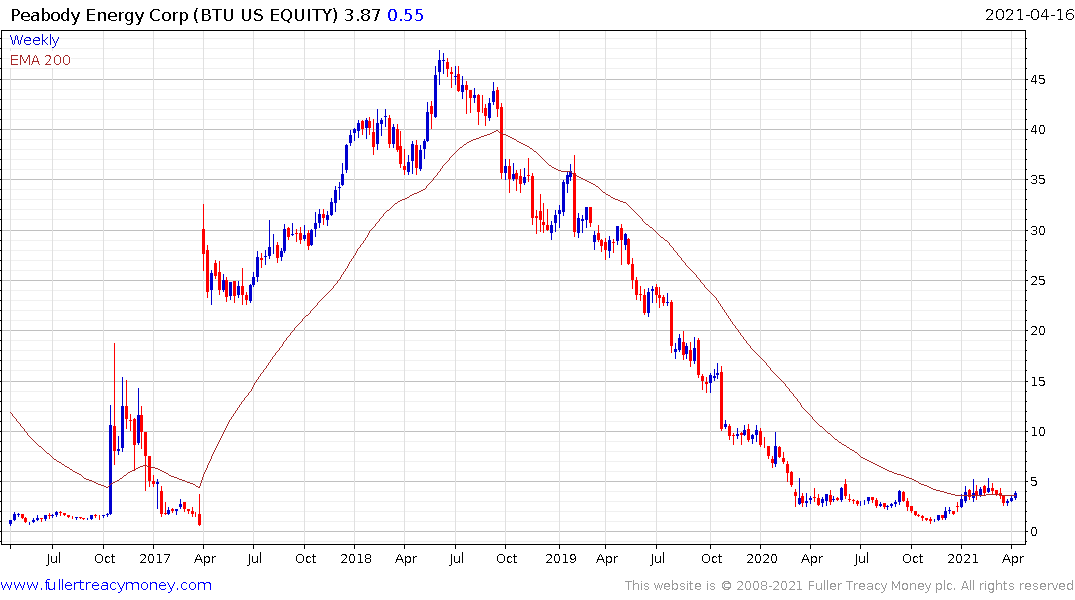 Peabody Energy has an almost identical production mix to Whitehaven but the share is firming within its base formation. 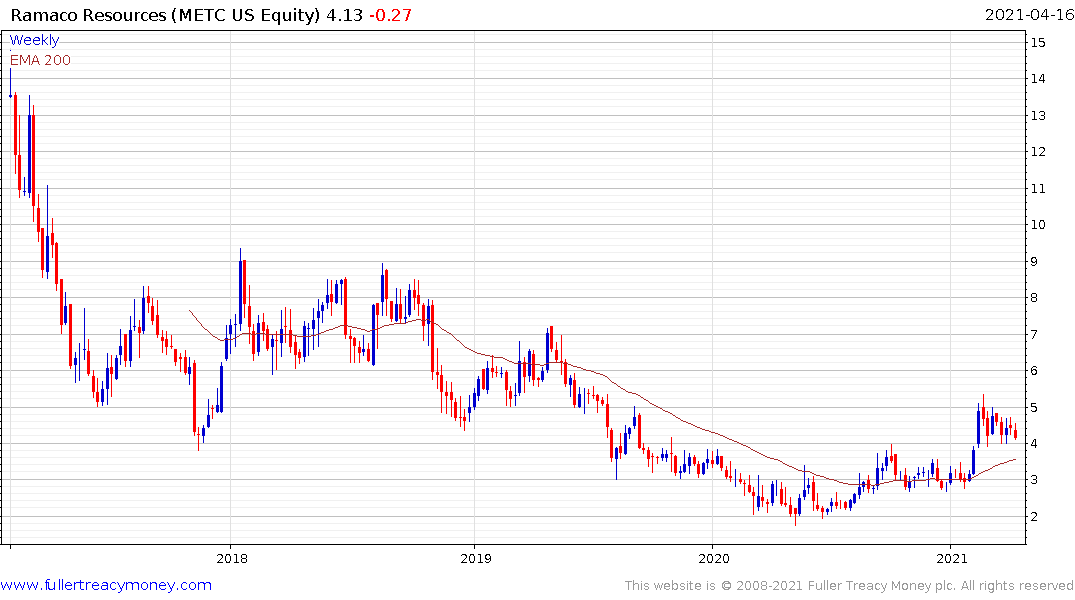 Meanwhile Ramaco Resources is a pureplay on metallurgical coal. The share is currently putting in a first step above its 2020 base formation. 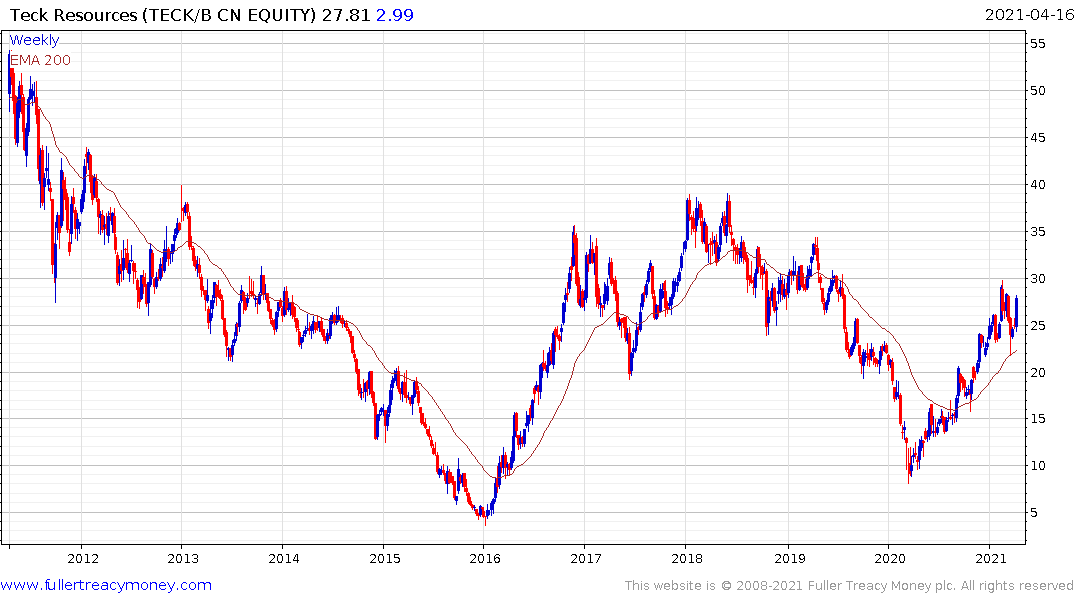 Metallurgical coal is Teck Resources’ largest business unit followed by zinc and copper. The share is currently bouncing from the region of the trend mean.