Trend Compendium 2050: Six MegaTrends that will shape the world
Comment of the Day

Trend Compendium 2050: Six MegaTrends that will shape the world by Eoin Treacy

Is the limit of 2°C enough? To keep the global warming below 2°C had long been regarded as the right target measure to limit the most dangerous risks. More recently, 1.5°C has been considered safer, which requires rapid, far-reaching, and unprecedented changes across all aspects of society.

I posted a podcast featuring Jeremy Grantham a few weeks ago. He is a very vocal advocate for decarbonisation but he also echoed this prediction that limiting emissions to 2% was nowhere near enough. He also opined that the trend of climate change is irreversible anyway. Those are two extremely important considerations. https://open.spotify.com/episode/5UYwZZuSJYZO87Mrl0lbzY

Climate alarmism is an increasingly powerful investment theme. There is no discussion about the logic of making massive changes to how everyone lives only for those efforts to be for naught. Last week a story to the effect that Greenland lost enough ice in a day to cover Florida in 2 inches of water made global headlines. However, everything I have read suggests that based on the current trend it would still take centuries for the all the ice to melt. That statement is not meant to obviate the risk, but simply to put the urgency of the discussion into perspective. A sea level rise measured in metres is unlikely in the lifetime of my children.  h

Decarbonising the global economy within the next fifty years is impossible. There are simply too many vested interests to make any plan viable. I’m all for clean air, recycling and clean water but if we are looking at climate models that have little hope of being reversed, shouldn’t a lot more effort be ploughed into mitigation strategies like seawalls and incentives to move inland? Instead, we have a panicky environment where neo-Malthusians tell us the world is about to end and the planet is broken.

It appears only a matter of time before new nuclear becomes more popular. China is about to spin up their first thorium molten salt reactor. The UK is about to begin using its existing nuclear reactors to produce hydrogen. 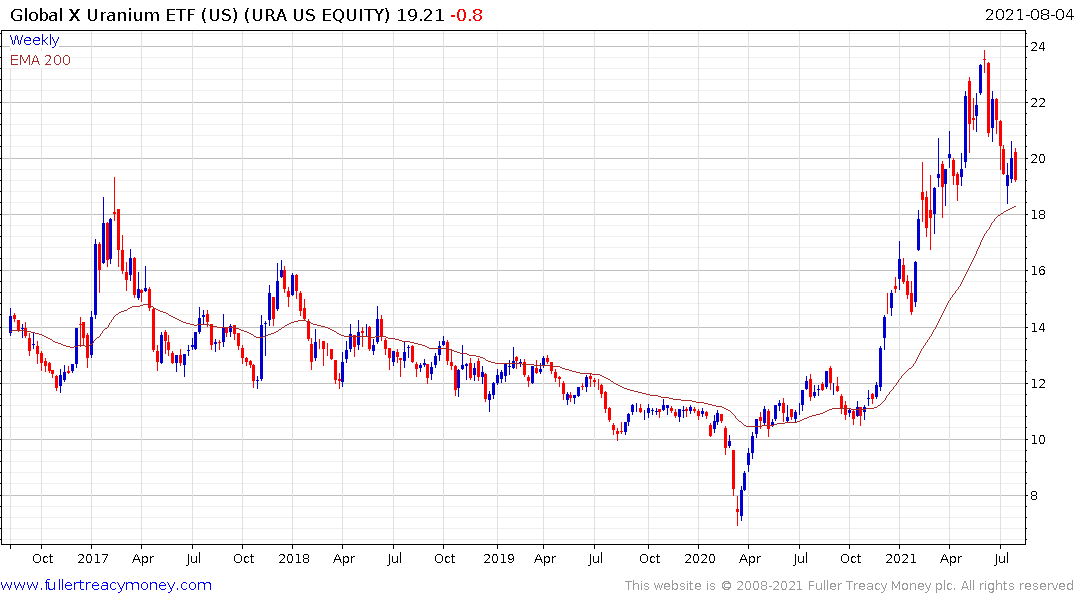 The Global X Uranium ETF has returned to test the region of the trend mean and will need to hold the $18 area if the benefit of the doubt is to continue to be given to the upside.