The price of solar power will continue to fall, until it becomes the cheapest form of power in a rapidly expanding number of national markets. By 2026, utility-scale solar will be competitive for the majority of the world, according to BNEF. The lifetime cost of a photovoltaic solar-power plant will drop by almost half over the next 25 years, even as the prices of fossil fuels creep higher. Solar power will eventually get so cheap that it will outcompete new fossil-fuel plants and even start to supplant some existing coal and gas plants, potentially stranding billions in fossil-fuel infrastructure. The industrial age was built on coal. The next 25 years will be the end of its dominance.   ​2. Solar Billions Become Solar Trillions With solar power so cheap, investments will surge. Expect $3.7 trillion in solar investments between now and 2040, according to BNEF. Solar alone will account for more than a third of new power capacity worldwide. Here's how that looks on a chart, with solar appropriately dressed in yellow and fossil fuels in pernicious gray:   3. The Revolution Will Be Decentralized  The biggest solar revolution will take place on rooftops. High electricity prices and cheap residential battery storage will make small-scale rooftop solar ever more attractive, driving a 17-fold increase in installations. By 2040, rooftop solar will be cheaper than electricity from the grid in every major economy, and almost 13 percent of electricity worldwide will be generated from small-scale solar systems.

The pace of technological innovation in solar is rapid and the argument that Moore’s law is applicable is gaining ground as the sector attached increasing research and development spending. The difficulties reported in getting the Ivanpah concentrated solar facility, in the Mojave Desert, up to peak performance is a setback suggesting the time required to deliver new technologies might be longer than some are currently envisaging. Here is a section from a Huffington Post piece dated November 17th:

"During startup we have experienced ... equipment challenges, typical with any new technology, combined with irregular weather patterns," NRG spokesman Jeff Holland said in a statement. "We are confident that Ivanpah's long-term generation projections will meet expectations."

The technology used at Ivanpah is different than the familiar photovoltaic panels commonly used for rooftop solar installations. The plant's solar-thermal system — sometimes called concentrated-solar thermal — relies on nearly 350,000 computer-controlled mirrors at the site, each the size of a garage door.

The evolution of utility scale concentrated solar facilities is probably a side issue when compared to the efficiencies that can be gained from combining domestic and commercial solar cells with batteries. The cost of solar cells is really only part of the story. The fact that battery technology is now reaching economies of scale is a powerful enabler. Considering the fact that almost no one currently has a battery in their home and very few businesses have them, the growth potential is truly impressive. 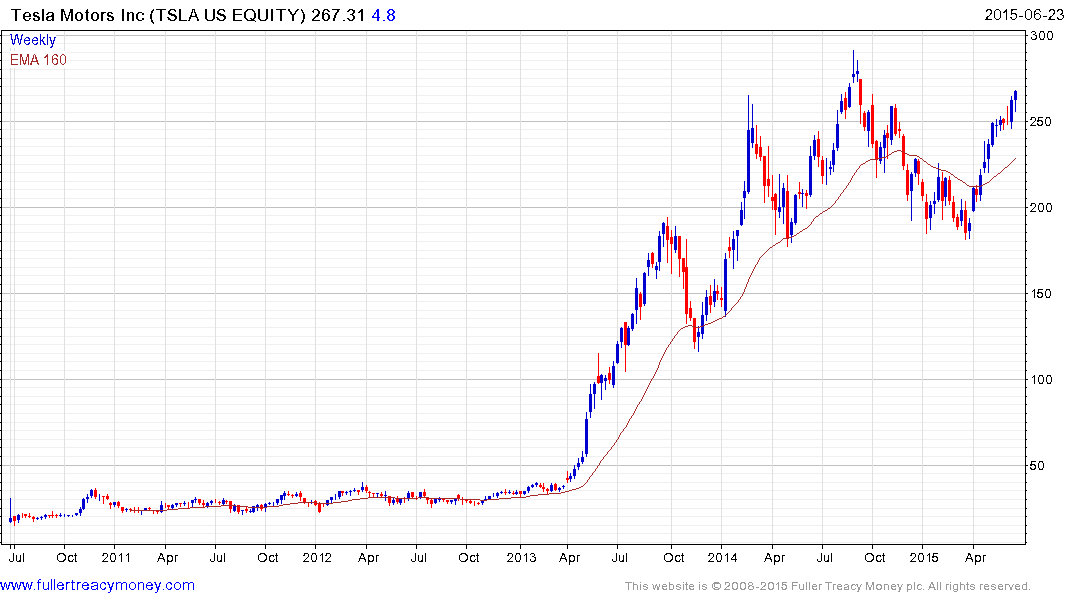 Tesla continues to rebound following the release of its home battery and is approaching the region of the 2014 peak. A break in the short-term progression of higher reaction lows would be required to suggest more than temporary resistance in the region of $275. 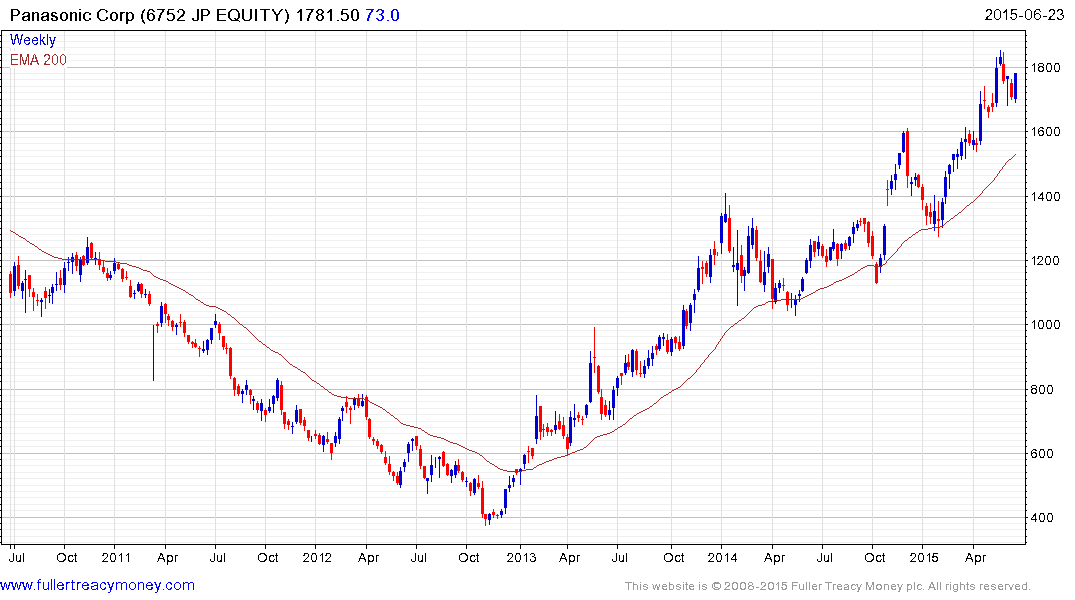 Panasonic remains in a reasonably consistent medium-term uptrend and while somewhat overextended relative to the 200-day MA, a sustained move below the trend mean would be required to question the integrity of the move. 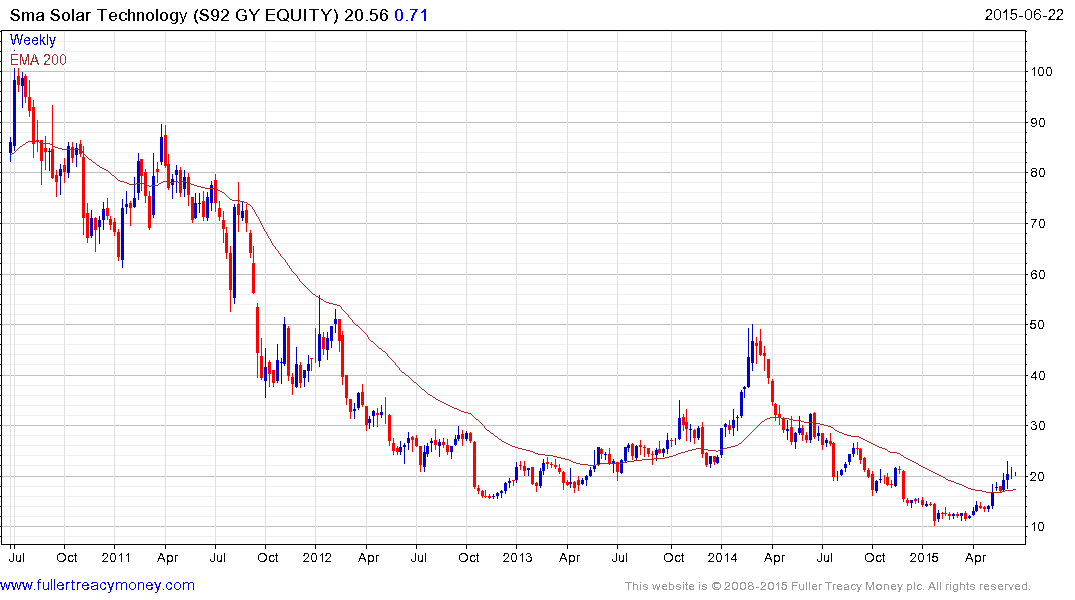 SMA Solar Technologies has held a progression of higher reaction lows since April and a sustained move below €17.50 would be required to question potential for additional upside.

With regard to point 4 in the above article I would be extremely cautious about projecting declining demand as a result of efficiency gains. There is absolutely no historical precedent for that conclusion. In the fact the effect of price on demand dictates the opposite. The more efficient our use of energy, the more of it we will use. Here is a link to an article on the Jevons Paradox.

This means that going forward we will need even more electricity than we are using today. Think of how much power will be required to air condition the burgeoning urbanisation of Africa in the next 50 years not to mention the industry required to employ billions of new consumers. That is before we develop additional sources of demand for energy in line with improving standards of living.