The Race to Hydrogen Goes Beyond Brexit With Italy-U.K. Deal
Comment of the Day

The Race to Hydrogen Goes Beyond Brexit With Italy-U.K. Deal by Eoin Treacy

Italy’s Snam SpA will brush aside Brexit and invest 33 million euros ($39 million) in ITM Power Plc, which produces electrolyzers, a crucial component in the hydrogen technology.

The investment is part of a 150-million pound ($197 million) capital increase by ITM. The accord is part of Snam’s expansion in the technology after the European Union put hydrogen at the heart of its measures to cut greenhouse gases and become climate neutral by 2050. Hydrogen, if made with renewables, could replace coal, oil, and eventually natural gas, and help eliminate about a third of emissions from industries like steel and cement by mid-century, according to BloombergNEF.

“The hydrogen sector is like the internet before the dot com boom,” Marco Alvera, chief executive officer of Snam, said in an interview. “What matters now is to unlock potential technology and to find the right positioning.”

The EU is going to spend €2 trillion on a green new deal. China is at least talking about going carbon neutral within the next thirty years. That’s a lot of money chasing an energy transition.

The USA is now effectively energy independent and that conveys a significant geopolitical advantage. China and Europe are still among the largest importers of energy. They have a clear incentive to do whatever is necessary to reduce imports. If that means lifting taxes, inventing regulations, pioneering new technologies and accepting higher costs so be it. The green part of the equation is a nice to have addition but the geopolitical positioning is essential as the global transitions towards multi-polarism.

The potential therefore is that hydrogen is Europe’s shale. The vast majority of the companies in the space are small and unknown but there is a great deal of money flowing into the sector. The low price of natural gas relative to oil has favoured the development of new sources of demand for years. Hydrogen is the best candidate to arrive yet. 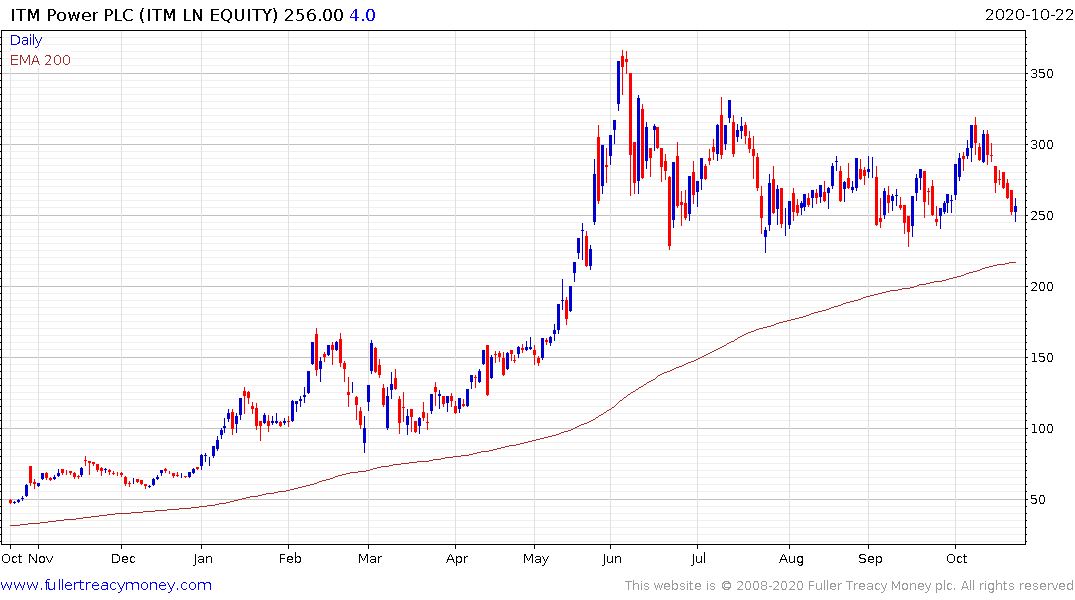 ITM Power surged higher earlier this year and has spend most of the last five months ranging. It has just about unwound its overextension relative to the trend mean. This is an expedient time for demand dominance to be reestablished if the medium-term uptrend is to remain intact. 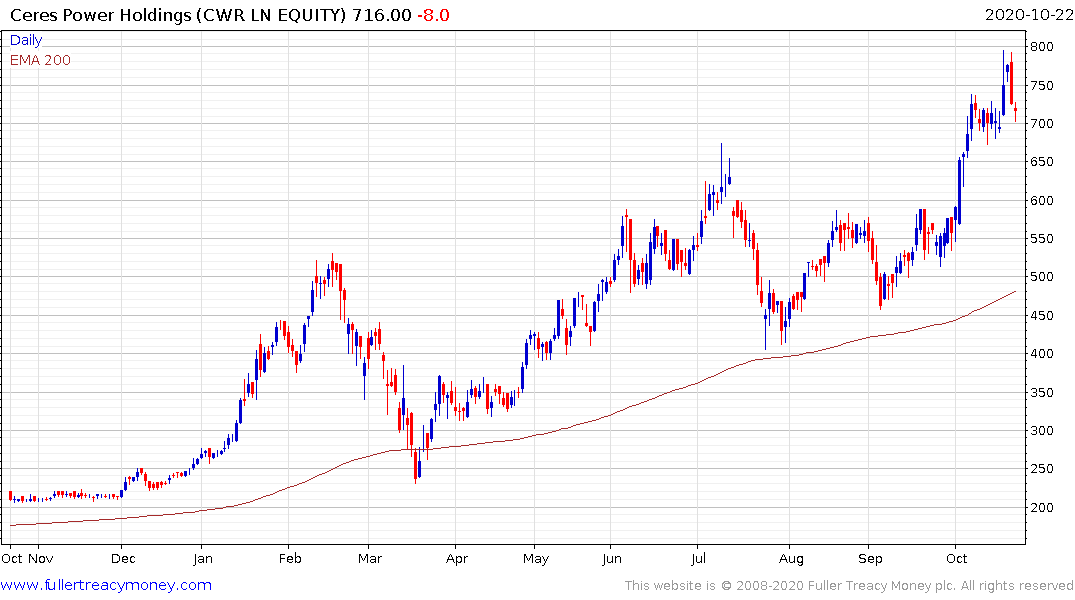 Ceres Power has found support in the region of the trend mean on multiple occasions over the last year. It is somewhat overextended at present and susceptible to some consolidation. 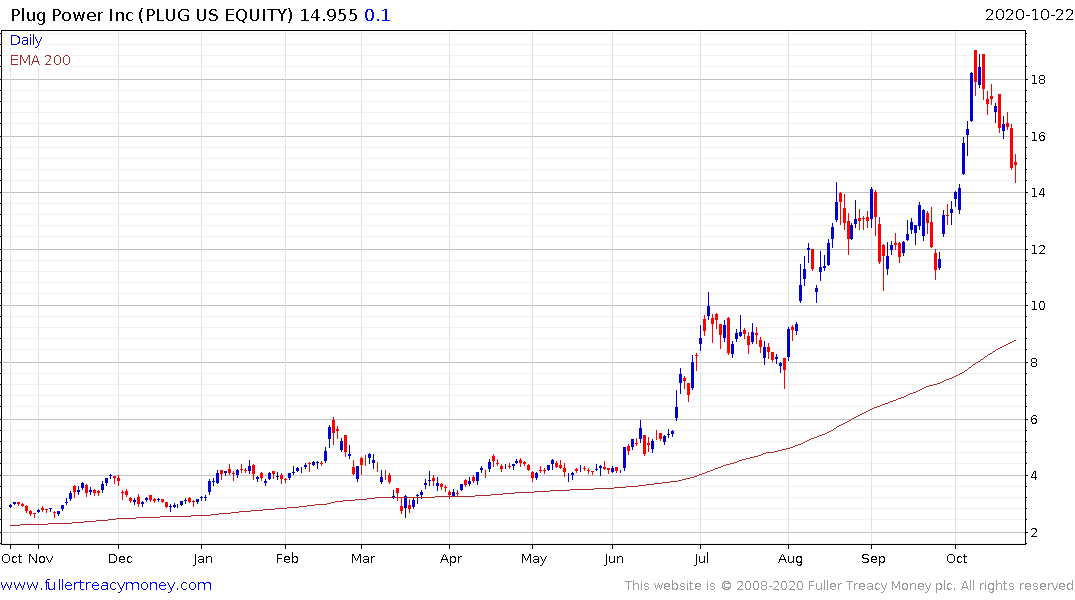 Plug Power has also taken a breather over the last few weeks. It is now testing the upper side of the most recent range. If the staircase sequence uptrend is to remain intact it will find support soon.

The majority of hydrogen related stocks have taken a breather over the last month following spectacular advances earlier this year. The big question now is whether the commonality of the sector is going to be sustained. 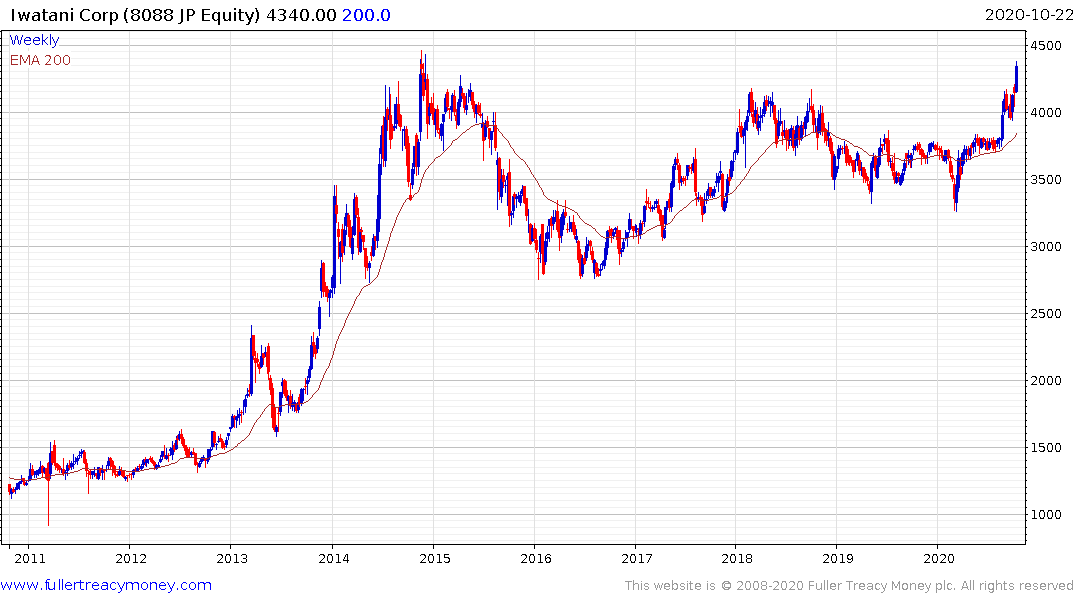 Japan’s Iwatani Corp stands out. The company produces liquid hydrogen. It rallied this week to test its 2014 peak and may in the process of completing a lengthy range.