From a geopolitical perspective, the ambitious environmental targets adopted by many countries, particularly in the West, places them between a rock and a hard place.

On the one hand, the long lead times associated with building up energy and mining infrastructure means that the greater the effort to meet environmental targets in the near term, the higher the likelihood that these Western countries will become even more dependent on China’s green energy supply chains.

On the other hand, if the United States and Europe decide to transition more slowly in order to give their domestic supply chains time to reach a critical mass, they will likely miss their environmental targets by a very wide margin.

Finally, while alternative energy’s growing market share will ultimately erode demand for oil in the longer term, over the next few years regulatory and legal impediments preventing Western oil companies from producing more oil, combined with a longer transition to alternative energy than many people expect, will translate into more volatile and tighter markets pushing oil prices higher.

When numbers in excess of $100 trillion are bandied about most people’s eyes glaze over. The global annual GDP in 2020 was $93 trillion. That suggests to achieve the stated aim of containing temperature rises to 1.5% by 2050, we need to made big assumptions. The most important is that if we go ahead and make the sacrifices and spend the money, that it will work.

As a species we are not very good at making long-term projections about the future. Just look at the history of demographics. China’s one-child policy succeeded in containing population growth and is now impossible to reverse. There are still predictions that the world’s population is on an uncontrollable upward trajectory and yet the global birth rate peaked more than a decade ago. Thomas Malthus predicted the UK would run out of food. William Jevons predicted the UK would run out of coal. None of these disastrous predictions took account of human ingenuity and the ability of systems to adapt. The dire predictions about the spread of the coronavirus just last year made the same mistake.

It is convenient to make linear projections about the future potential of trends but nothing goes up forever. When a trend is at its strongest and the exponential growth curve is most obvious, that’s usually a peak, not the beginning.

Coming out of the pandemic, people are impatient for change. They want to do the “right” thing, correct past injustices and set up an economic system that is better for everyone. Climate policies are a big part of that. The reality is we are at the beginning of the mania phase. So far, projects have been built in the easy areas. To grow further, massive regulatory headwinds need to be overcome. That implies cross border carbon taxes are a very real possibility and regulatory backing for easier permitting. 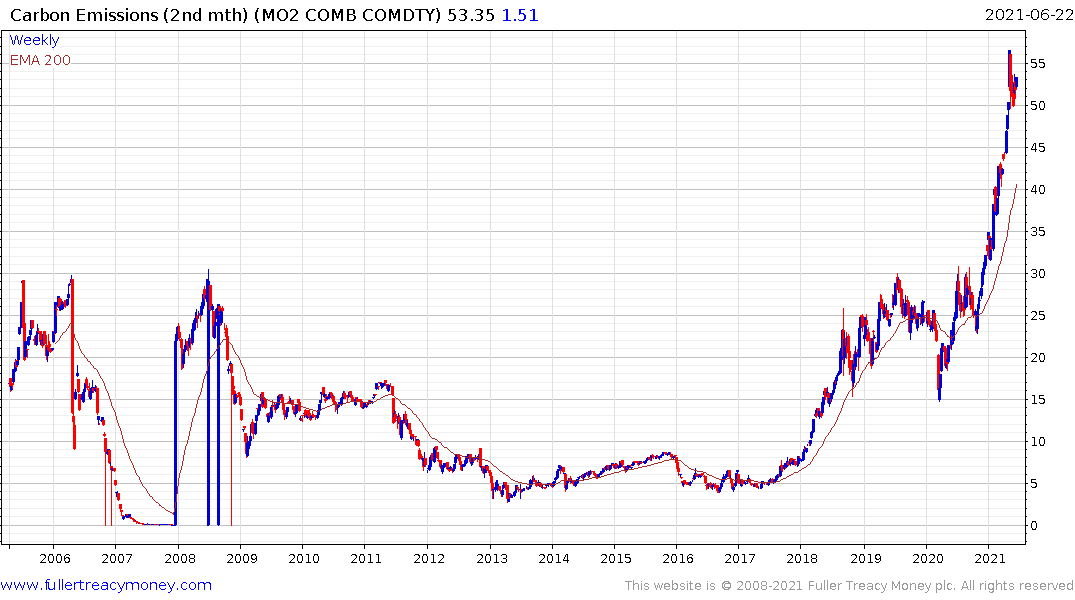 Carbon pricing is already in a well-developed bull market and there is little prospect of that trend changing anytime soon. The challenge is that if North America and the EU deploy carbon taxes on imports without compliance from China it will lend further credence to the multi-polar world trend with developed markets pitted against emerging markets.

Trampling on property rights and local priorities in the name of big global ambitions has a long history of creating revolutionary movements. The most recent has been the rise of populism in response to globalisation and the government response to the credit crisis. 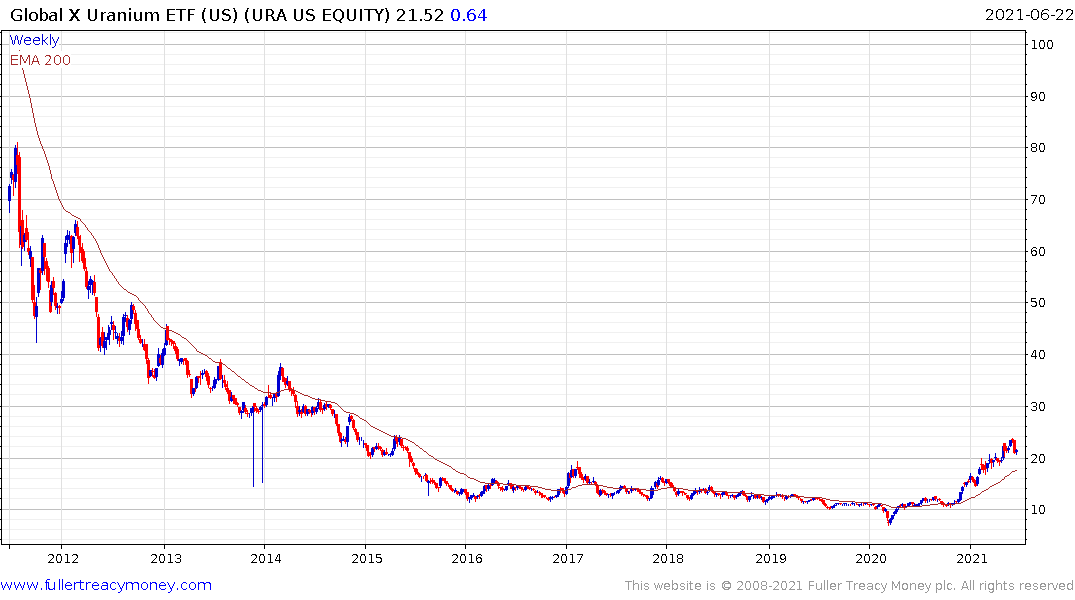 That suggests the end point of that trend will be the evolution of a new nuclear and hydrogen. They are less reliant on industrial metals and both have the capacity to provide base load power. To reach that point may take a couple of decades and between now and then a great deal of solar and wind will be installed.

This interview of Jamie Strauss for Palisades Gold Radio may be of interest. His website, Digbee, is helping companies formulate and publicise their ESG credentials. The reality is that a lot more industrial resources will need to be mined and processed to feed the investment boom in renewables. To do that they will need to ensure feasibility studies align with the priorities of all stakeholders. It’s a new world for the mining sector and adaption will be critical to success. 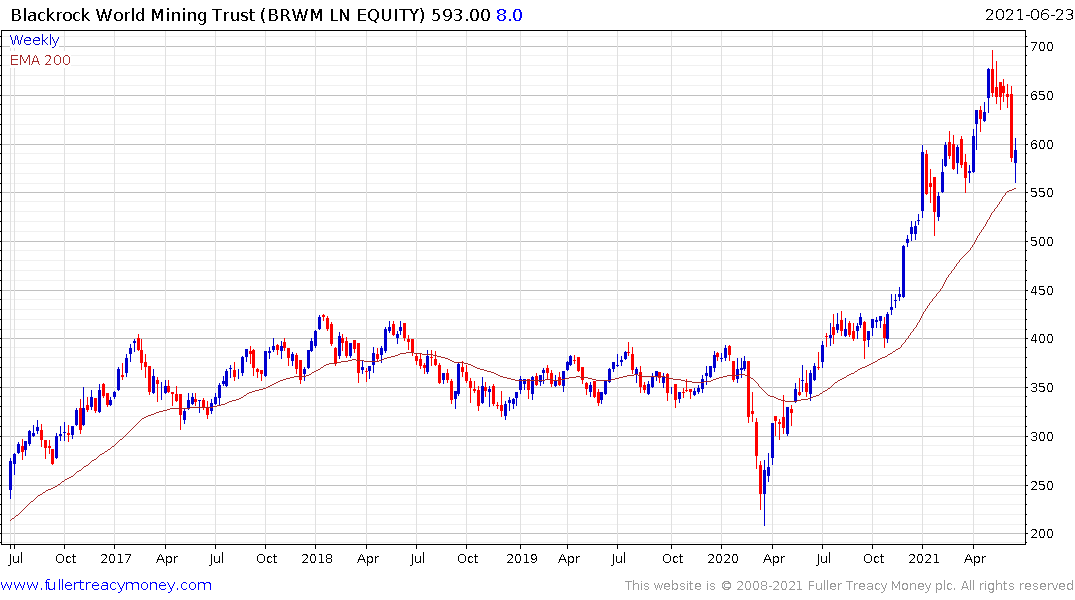 The Blackrock World Mining Trust steadied today from the region of the trend mean. 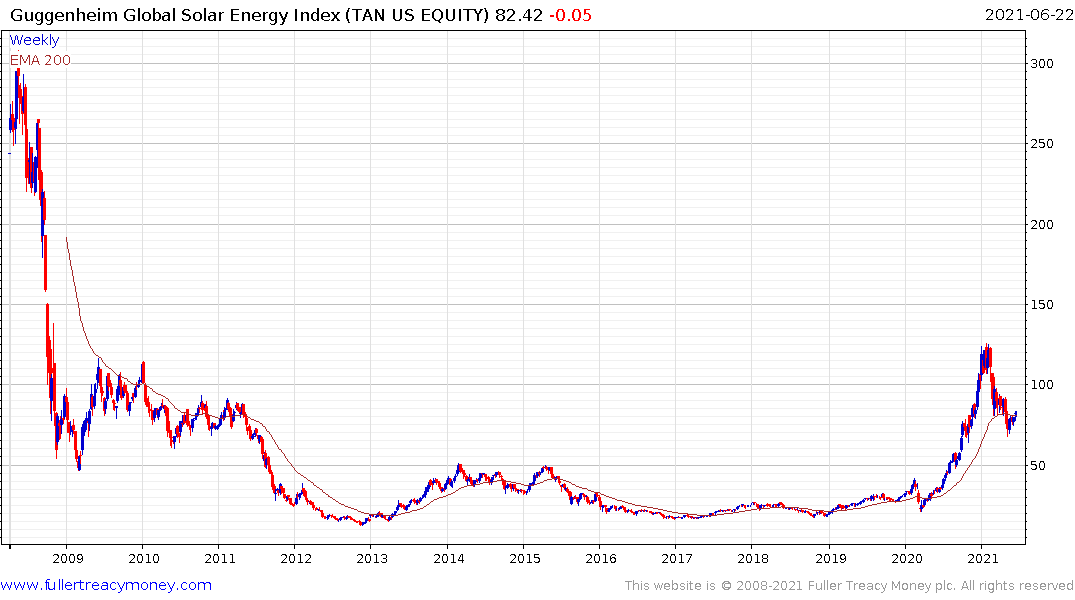 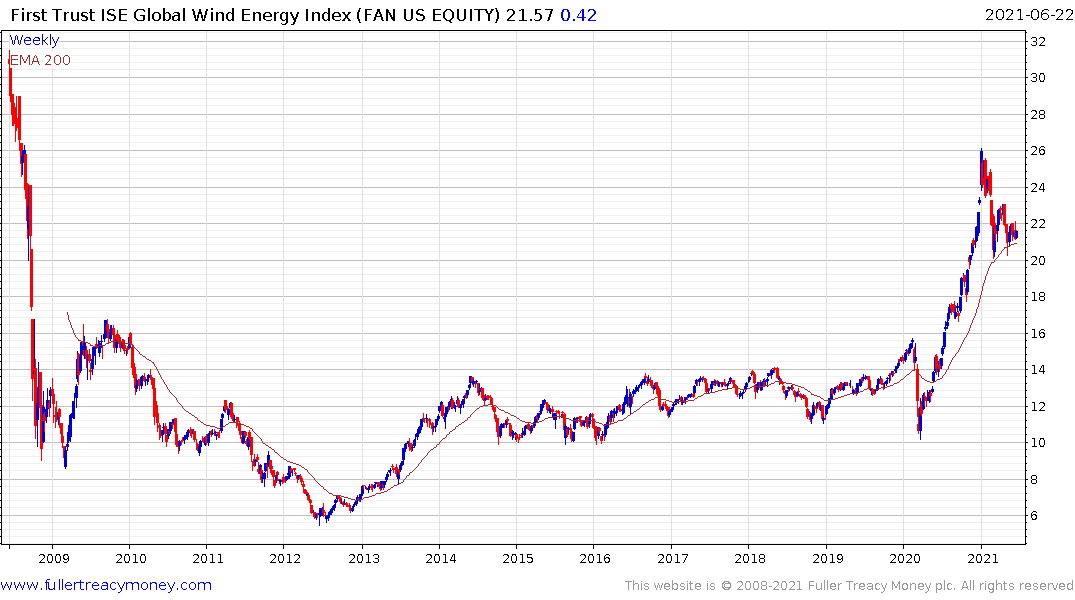 The Wind ETF has a similar pattern.

This report from JPMorgan, posted in September carries more information about what is required for an energy transition and may also be of interest.

This article highlighting the difficulties of matching supply and demand when the grid is dominated by renewables is also worth considering. It suggests base load supply from carbon free sources has a place in the market.