However, looking only when the gold-oil ratio has exceeded 30:1 (i.e., oil is cheap relative to gold), crude has returned 32% on average over the next twelve months (over four times its long-term average), while gold has returned 4% on average. Oil was lower only 13% of the time (70% less often). On average, oil outperformed gold by 28% during these periods compared with 2% normally.

At the other extreme, when the gold-oil ratio was less than 10:1 (i.e., oil was expensive relative to gold), crude lost 7% on average over the next twelve months and was negative nearly 60% of the time. Gold returned 18% on average during these periods, outperforming oil by 25%. Since 80% of all observations occur when the ratio is between 10 and 30 you should expect the relative returns of both gold and oil to be like their long-run averages and that is exactly what occurred. When the ratio was between 10 and 30, oil returned 5% on average in the following 12 months, and was lower 41% of the time while gold returned 4% and was lower 33% of the time, roughly in line with long-term averages.

We last used this analysis in early 2016 to justify our investments in oil-related securities. At that point, the gold-oil ratio hit a then-record 47:1. We argued that oil prices were set to surge and invested in oil-weighted E&P securities as a result. Over the next 30-months, oil rallied by 191% from $26 per barrel to $76 per barrel by October 2018. Gold on the other hand fell by 4% over the same period. Oil stocks (as measured by the XLE ETF) advanced by 56%, well in excess of gold stocks (as measured by the GDX) which rose only 3% but lagging the S&P 500 which advanced 69%.

The gold/oil ratio spent much of the last couple of decades ranging mostly between 10 and 30. On the small number of occasions is veered outside of those bands the move was quickly reversed. It has therefore been reliable indicator of where value was present on repeated occasions. However, the current reading questions that conclusion. 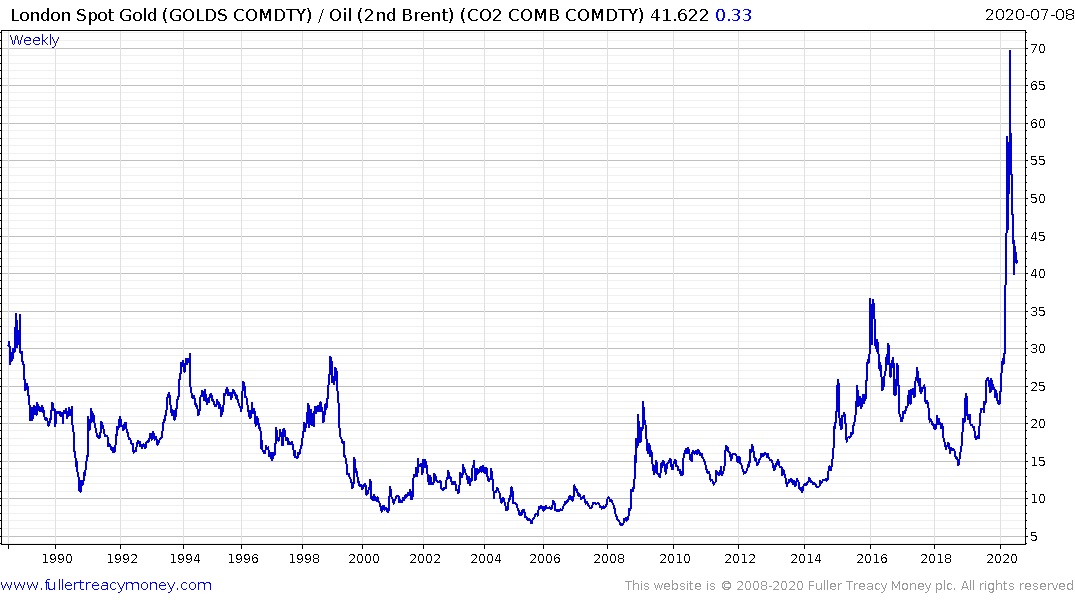 We only have one other example of a relative comparison to gold that has behaved like the gold/oil ratio. That is the gold/platinum ratio. 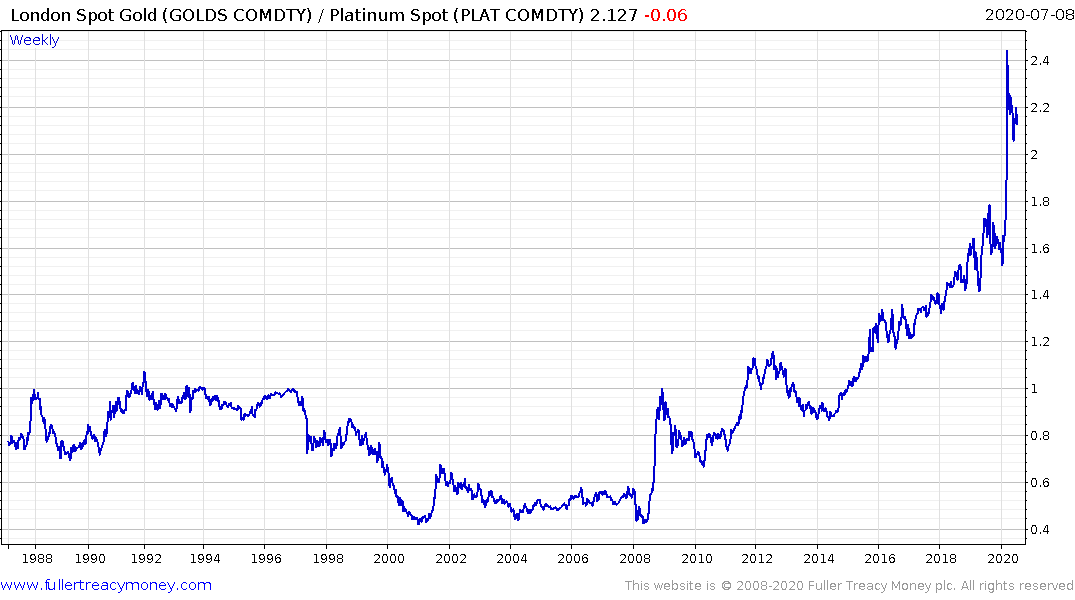 Before 2013 it was extremely rare for platinum to trade below the price of gold. However, it is now less than half the price of gold and the trend of underperformance has been evolving for seven years. The diesel cheating scandal story broke in 2014 and metastasized over the next couple of years. It eventually killed off a significant demand centre of platinum and contributed to the metal’s underperformance. 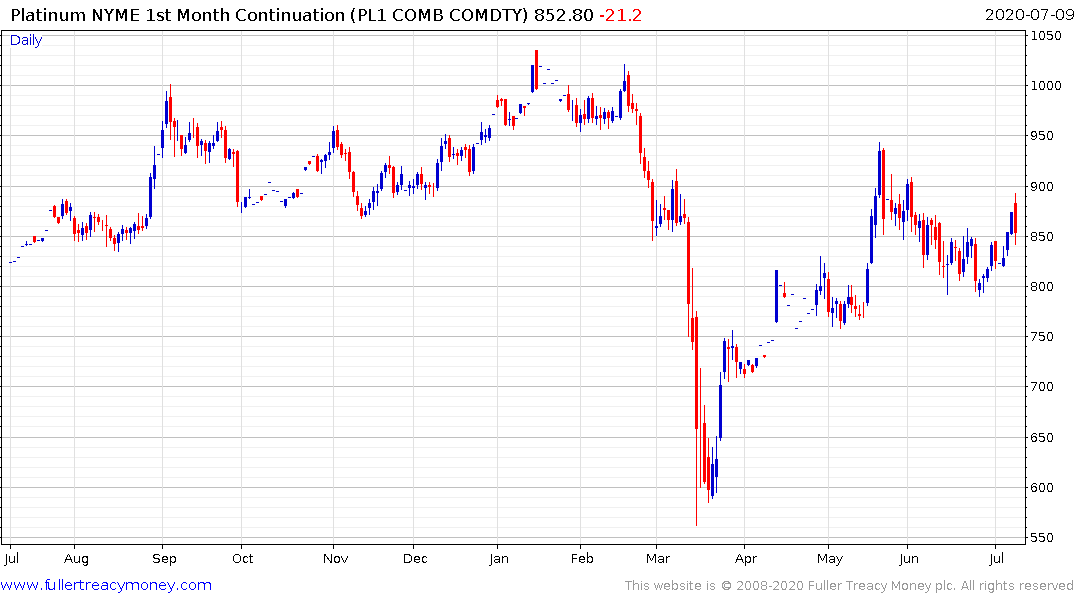 Platinum remains an underperformer in the precious metals sector.. 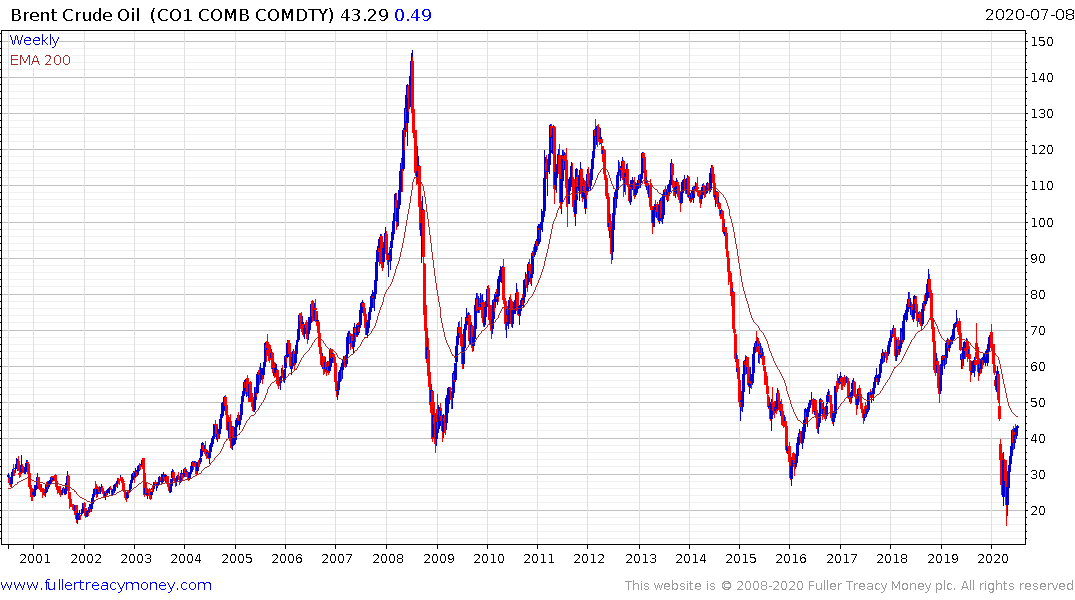 I have long been of the opinion that oil is in a secular bear market. There is a massive amount of additional supply available to the global market at prices above $60. That suggests trough to peak swings of 200% are possible in a broad ranging environment. 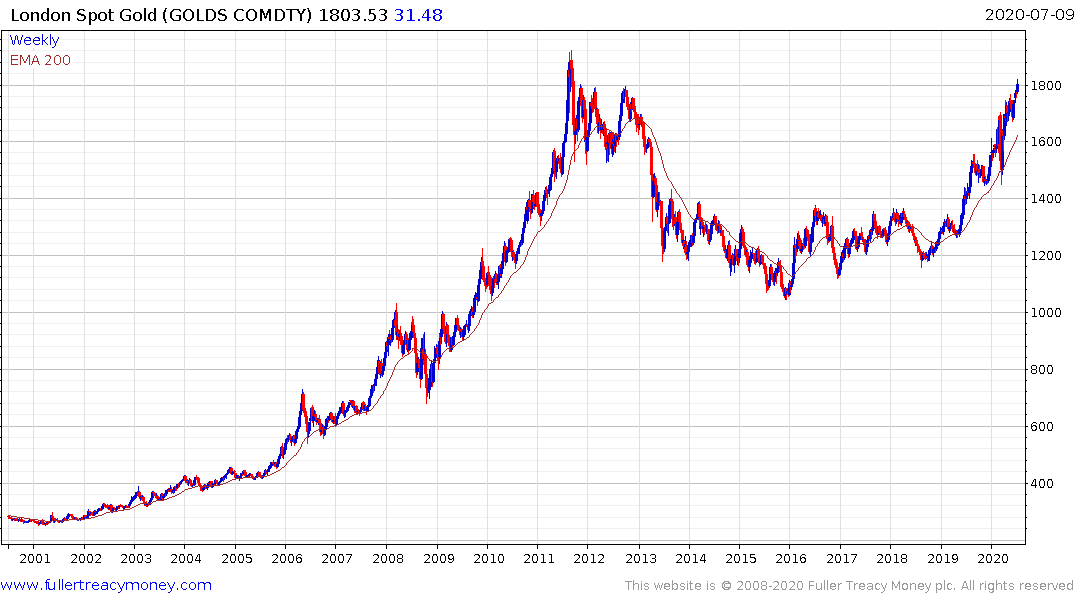 Meanwhile gold appears to the be in the early stages of new bull market. I am inclined to think of this as a new bull market but there are some commentators who believe the eight-year long hiatus was a pause in the secular bull that began in 2000.

This graphic estimating that electric SUVs will drop below the cost of internal combustion engines in the next couple of years should give anyone pause about being overly bullish on oil. There is the real possibility that the breakout on the gold/oil ratio will be sustained. 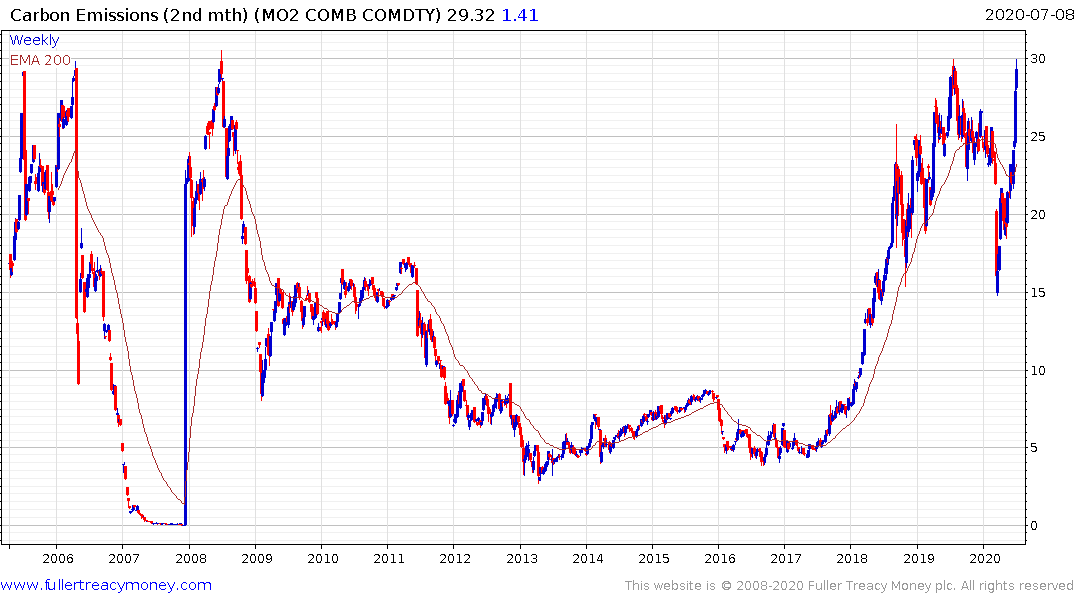 The continued uptrend in the cost of carbon credits is an additional reason to remain cautious of an overly bullish view on oil. 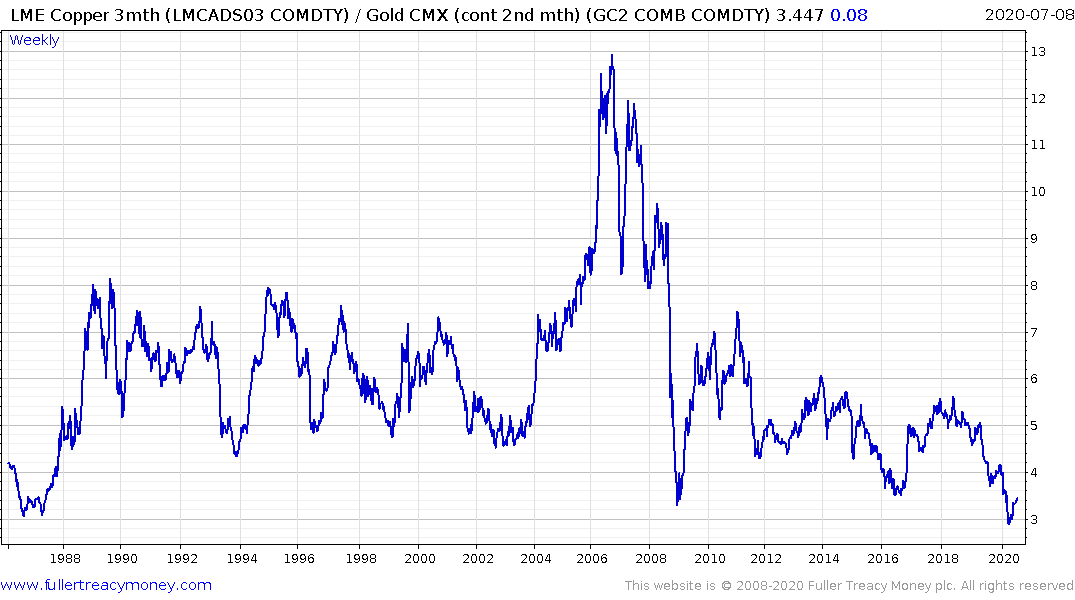 Another possible comparison is the copper/gold ratio. It ranged between about 4 and 8 between 1988 and 2004. It then exploded on the upside, collapsed and has been trending with a downward bias for the last decade. It is now firming from the los posted in 1987 and a sustained move above the trend mean would signal a return to outperformance for the leading industrial metal.