Egyptian authorities were desperate to get traffic flowing again through the waterway that’s a conduit for about 12% of world trade and about 1 million barrels of oil a day. This has been the canal’s longest closure since it was shut for eight years following the 1967 Six Day War.

Firms including A.P. Moller-Maersk A/S and Hapag-Lloyd AG were forced to reroute their ships via the southern tip of Africa, which can add two weeks on to a journey between Europe
and Asia.

Shipping experts anticipate that the disruption will last for months because of schedules being upturned and the uneven wave of cargo that will hit ports down the line.

While the hit of the canal’s $10-billion-per-day closure will likely be small given that global merchandise trade amounts to $18 trillion a year, the prospect of hundreds of ships being thrown off schedule will ensure cargo delays in the weeks if not months ahead. The dozen or so container carriers that control most of the world’s ocean freight capacity are already charging record-high rates on some routes, and shortages of everything from chemicals and lumber to dockside labor already abound.

It seldom pays to bet against small well-funded teams who are presented with a gargantuan task. The freeing up of the Suez Canal after a week is just such an example, and the snarl in the global supply chain will be smoothed out in a week or so. That’s good news but the whole episode is representative of the stress the global supply chain is under. Everyone is exhausted after a year of strife and disruption and that raises the risk that accidents will happen.

It also re-emphasises how geopolitically sensitive global trade’s chokepoints are. China’s $400 billion deal with Iran increases the nation’s focus on the Straits of Hormuz as well as the incentive to ensure supply chains are secured on the route from Iran through to China. That suggests an interest in ensuring Singapore remains on side as well. 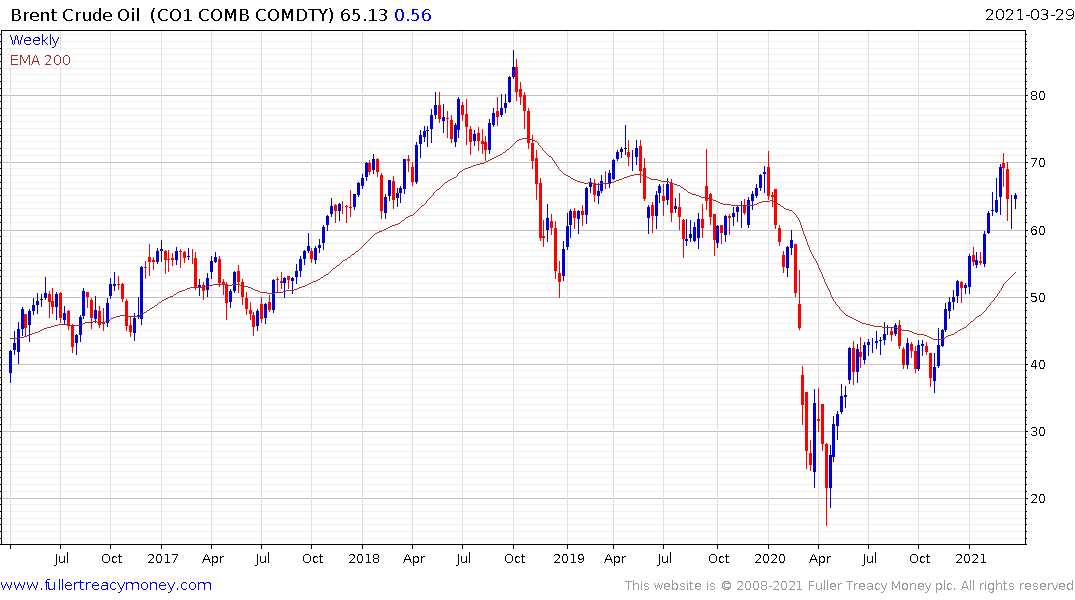 Brent Crude continues to hold the $60 area and the sequence of higher reaction lows. Without evidence of a meaningful US onshore supply response there is continued scope for additional higher to lateral ranging.