The Fed Minutes That Shook the World
Comment of the Day

The Fed Minutes That Shook the World by Eoin Treacy

Why such angst? There’s a lot in the minutes, with much useful information for students of the economy and monetary policy. You can find the full version here. For those less interested in such studies, the passage of three sentences that accounted for more or less all of the market reaction read as follows:

it may become warranted to increase the federal funds rate sooner or at a faster pace than participants had earlier anticipated. Some participants also noted that it could be appropriate to begin to reduce the size of the Federal Reserve’s balance sheet relatively soon after beginning to raise the federal funds rate. Some participants judged that a less accommodative future stance of policy would likely be warranted and that the Committee should convey a strong commitment to address elevated inflation pressures.

This commits the central bank to nothing, but the notion that there were hawks on the committee who thought that the Fed should reduce the size of its balance sheet (in other words, start to sell off its huge bond holdings in a move that, all else being equal, should raise yields) came as an unpleasant surprise. Those words are there for a reason. The Fed thought it a good idea to plant a reminder of hawkish intent just as markets were ramping up again after the New Year break, and it seems to have worked.

The Fed Minutes were the catalyst for the sell-off in bonds yesterday which contributed to the weakness in the growth sector. I suspect talk of being more aggressive in quantitative tightening than the 2018/19 period was the primary reason investors took fright.

The big question at present is whether the Fed is walking into a big mistake. Inflationary pressures are rolling over while others are beginning to arise. The Baltic Dry Index has experienced a deep correction and is back testing the upper side of the base formation. If the benefit of the doubt is to be given to potential for additional upside, the breakout will have to hold. 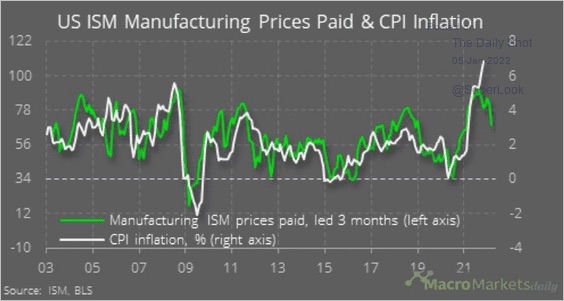 This chart from MacroMarketsdaily also helps to highlight that prices paid by manufacturers tend to lead inflation figures. Inflation is probably already peaking. 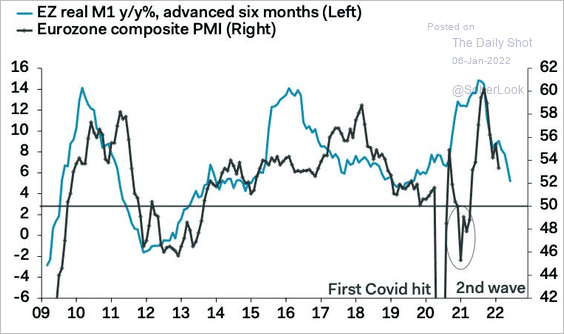 That’s equally true of Europe where money growth and the PMI have also rolled over which should reduce inflationary pressures. 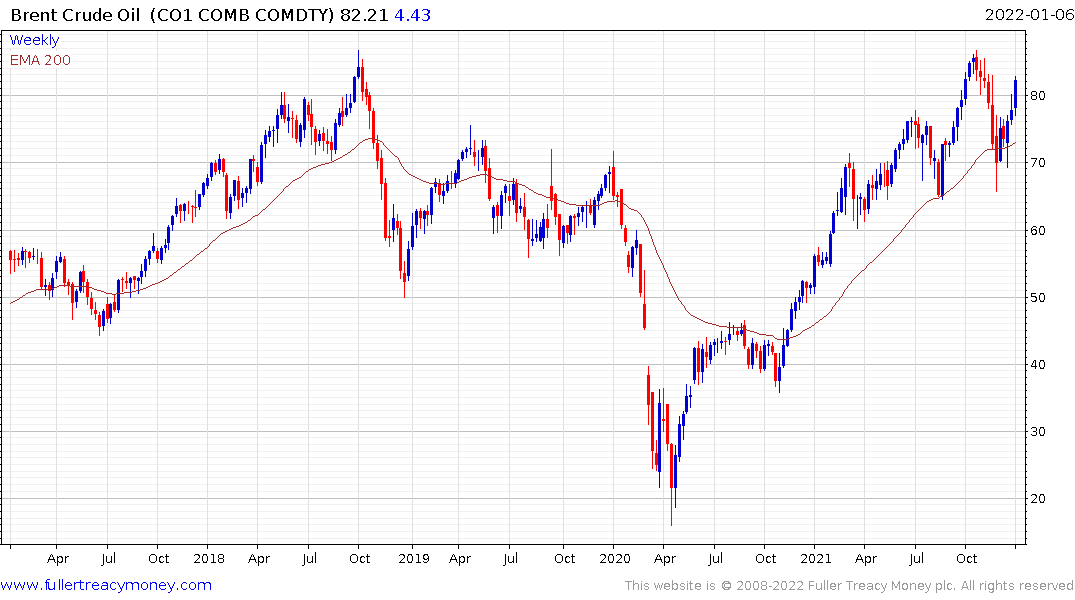 The counter argument is energy prices are very firm. European and Asian gas prices remain at elevated levels, coal prices are strong and brent crude oil is attempting to break out again.

Rising energy prices and moderating inflationary pressures point to slower growth or stagflation lite. That brings us back to the intention of the Federal Reserve to remove monetary stimulus by March, raise rates shortly afterwards and embark on quantitative tightening in a more accelerated fashion after that. The timing of these measures is up for debate but these plans don’t sound like the Fed is any mood to provide additional stimulus. 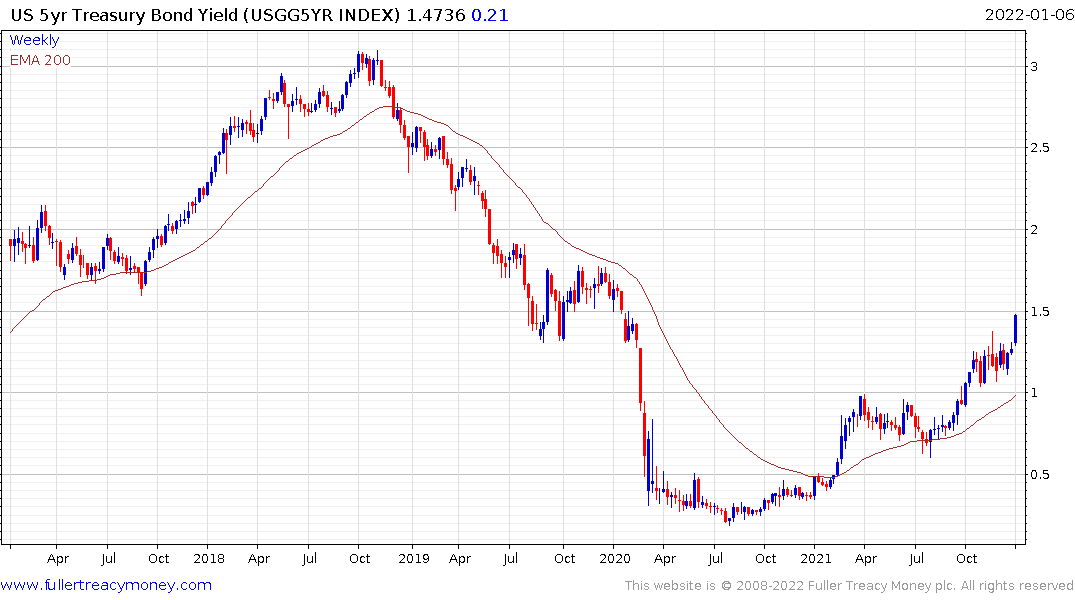 The 5-year yield continues to trend higher less because of inflation and more because of the removal of a significant buyer in the form of the Fed. 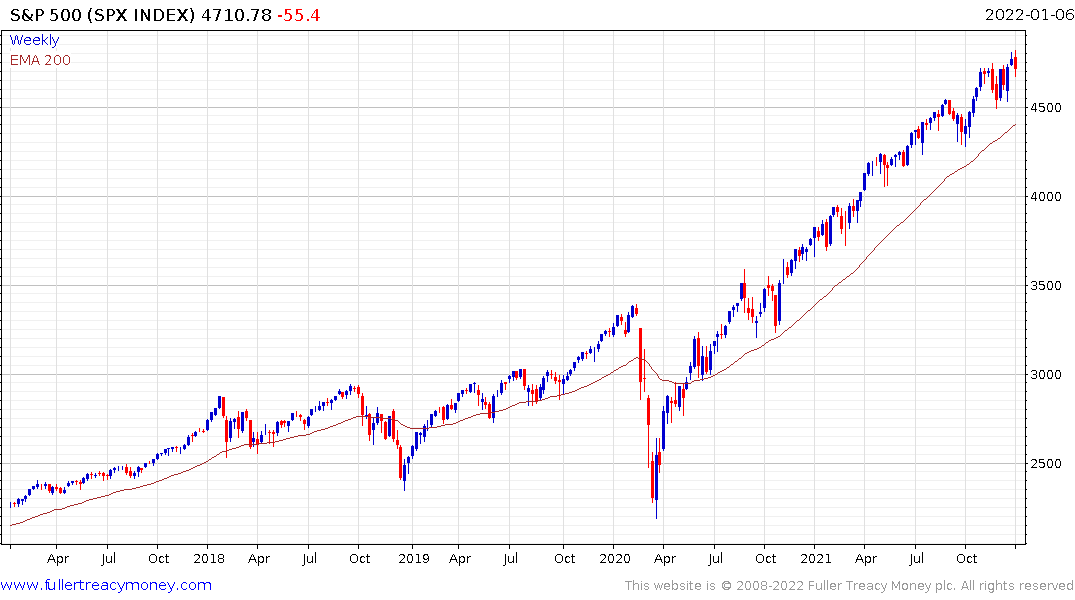 Back in 2018, it took a 20% pullback on the S&P500 to chasten the Fed. Steve Mnuchin’s Boxing Day meeting with bank CEOs, convening the plunge protection team, put a floor under markets and Jay Powell soon made soothing statements. The total assets of central banks figure stopped declining in early 2019 and the Fed stopped raising rates.

Right now, the Fed is talking markets down rather than acting. The challenge is large portions of the growth segment survives on abundant free credit, promises and little more.

The buy the dip intuition runs strongly in the market after more than a decade of success. That helped stocks to steady today but rising yields are an undeniable challenge. The odds of a more pronounced process of mean reversion are high. 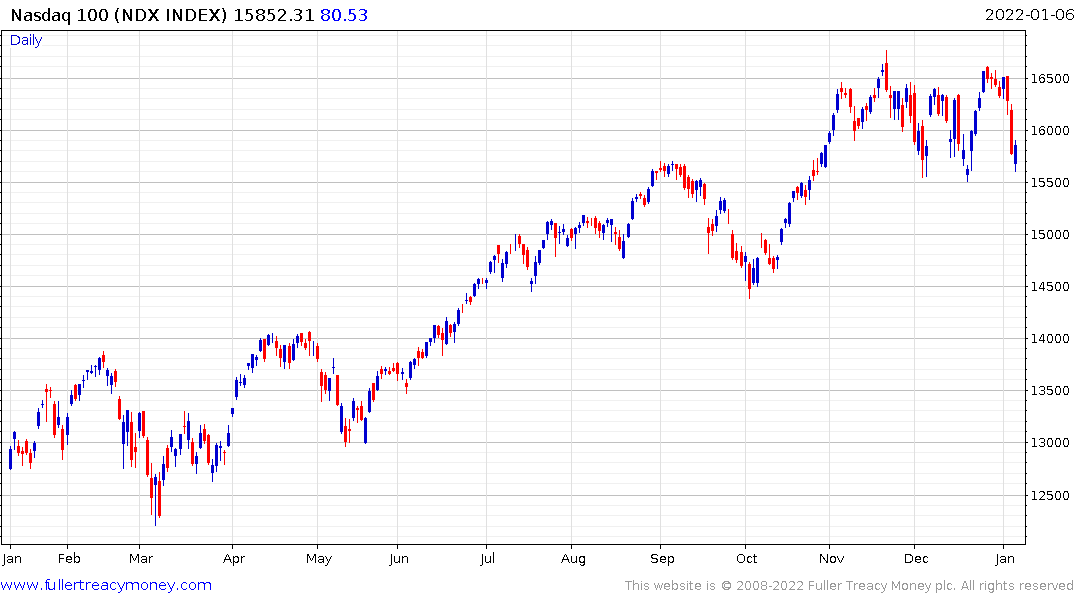 The Nasdaq-100 paised today in the region of the September peak and the December lows. This is the first area of potential support and will need to hold if the trend is to remain consistent. 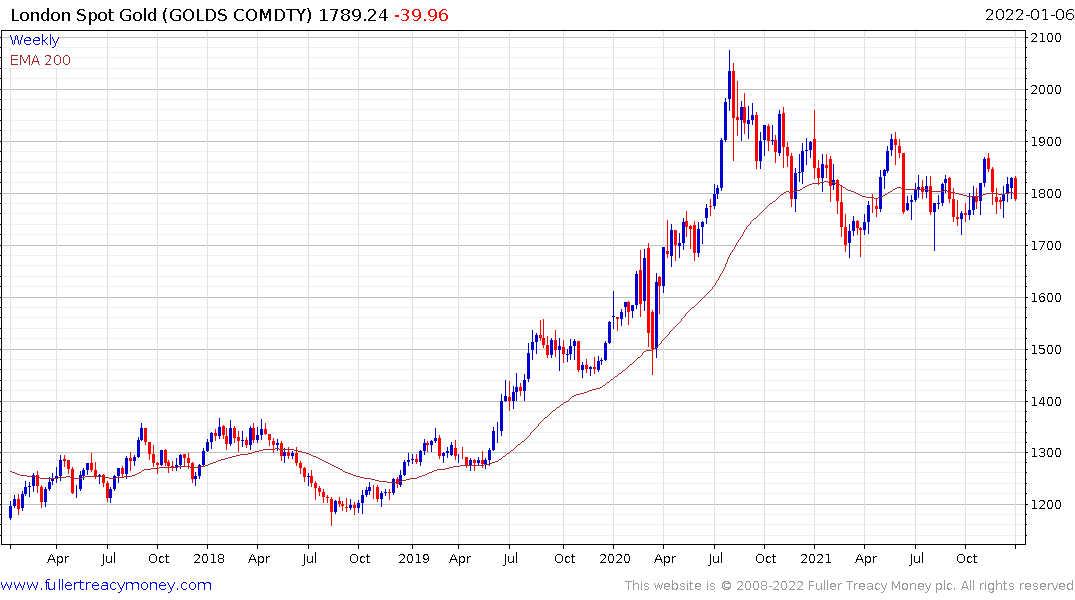 Gold dropped back below the psychological $1800 level today as negative real interest rates narrowed. The $1750 area will need to hold if this support building phase is to be given the benefit of the doubt.