The Days of Low Treasury Yields Are Numbered by Eoin Treacy

Today, there’s ample reason to expect a positive term premium to return. For one, the Fed has a new, more patient monetary policy stance. As a result, inflation will be higher and more variable — a risk that must be compensated with higher long-term yields. Also, keeping inflation in check will require a higher peak fed funds rate, reducing the risk that the Fed will again get pinned at the zero lower bound. Beyond that, deficit financing is expanding the supply of government bonds: Treasury debt outstanding has quadrupled since 2007, and the Biden administration is seeking to add several trillion dollars more. Meanwhile, one big source of demand for the bonds is set to dwindle as the Fed phases out its asset purchases, most likely next year.

Putting the pieces together, one can expect a 10-year Treasury yield of at least 3%: The 2.5% floor set by the federal funds rate, plus a term premium of 0.5% or more. But that’s not all. The Fed says it wants inflation to exceed its 2% target for some time, to make up for previous shortfalls. This, in turn, could stoke inflationary fears and lead markets to expect a higher path for future short-term rates. As a result, the 10-year Treasury yield could more than double from the current 1.6%. And if persistent deficit financing prompts concern about growing U.S. debt, the yield could go to 4% or higher.

Anyone who has been in finance for less than a decade has rarely seen 10-year Treasury note yields above 3%. So what’s coming could, for many, be quite a shock. The secular bond bull market that began nearly 40 years ago is finally ending.

US job openings now far exceed the pre-pandemic peak. At the same time credit card balances are declining even as debt loads are increasing. Meanwhile the unemployment rate is holding at 6%.

The conclusion is simple. Households are buying capital goods like houses and cars, that do not require credit cards, because they are flush with cash. Companies are desperate for workers, but unemployed people are in no hurry to take up offers. The reality is the stimulus enacted in the first quarter was overly generous and has created economic disincentives. It exacerbated bottlenecks and enhanced consumer perceptions of rampant inflationary pressures. 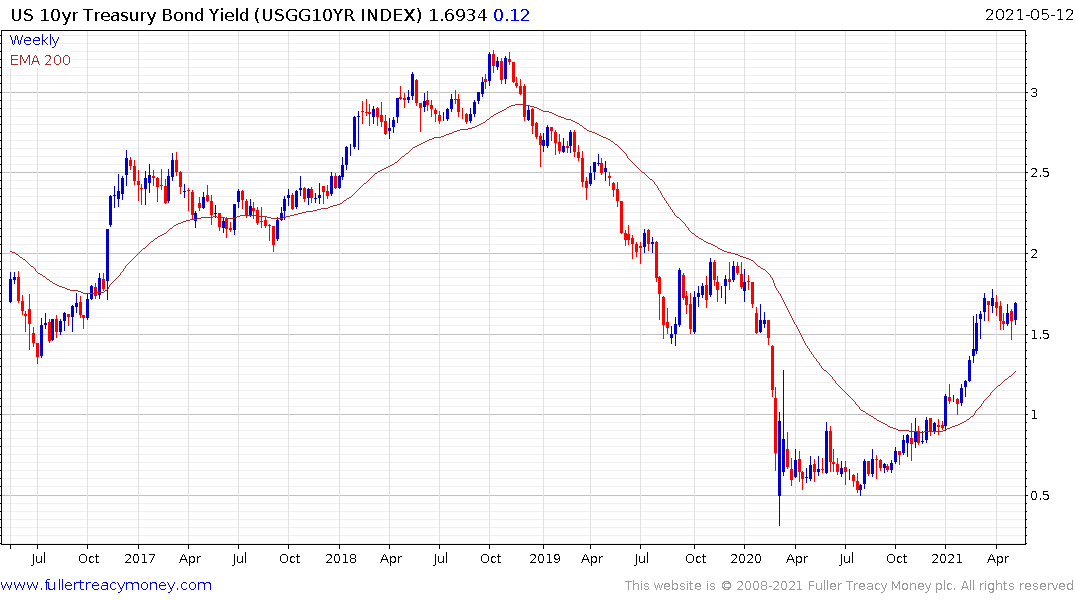 The 10-year Treasury yield failed to sustain the breakdown on Friday and is rallying towards the upper side of the range near 1.8%. A clear downward dynamic would be required to question potential for additional upside. Since “everything is priced off the 10-year” this rebound is having significant knock-on effects for anything that depends on zero interest rate policy persisting indefinitely. 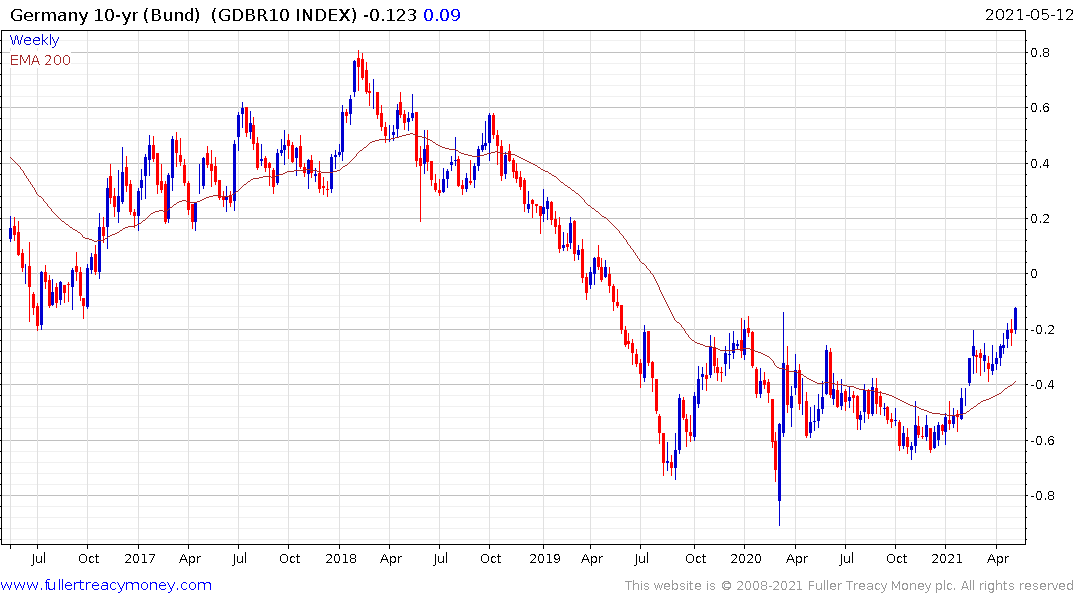 German Bund yields broke out yesterday and extended the advance today. The rate is still in negative territory, but the potential for base formation completion is increasing. That suggests Germany’s time of being paid to borrow money is coming to an end as the prospect of a Green Party chancellor increases. 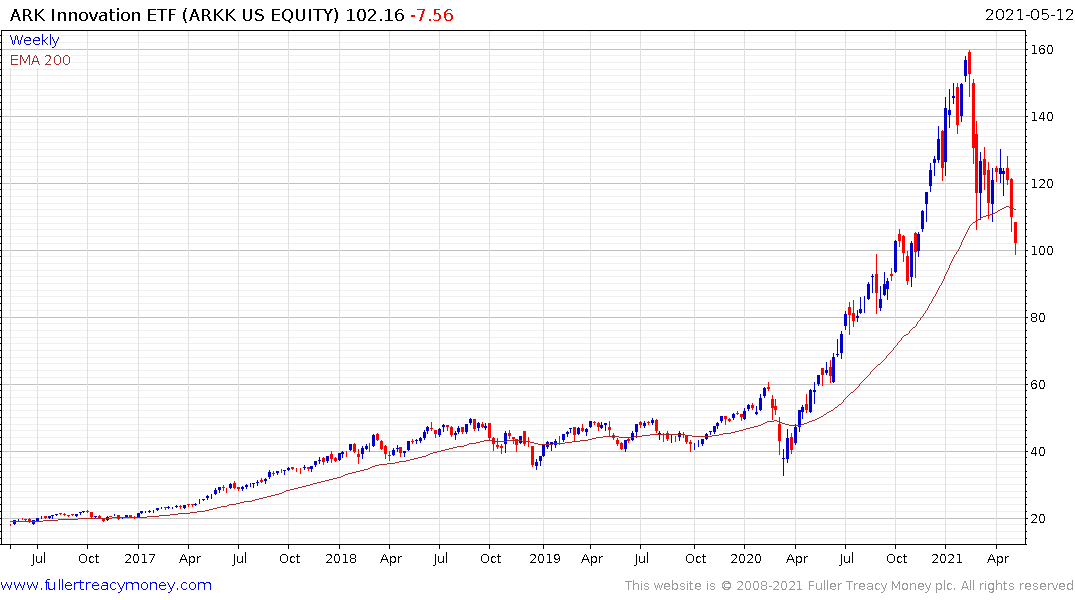 The innovation portion of the stock market has been underperforming since February as exposure to the potential for higher rates was priced into loss making companies. That pressure is now extending to the semiconductor sector with Taiwan Semiconductor pulling back extremely violently in the domestic Taiwan market last night. That weakness fed through into US trading today. 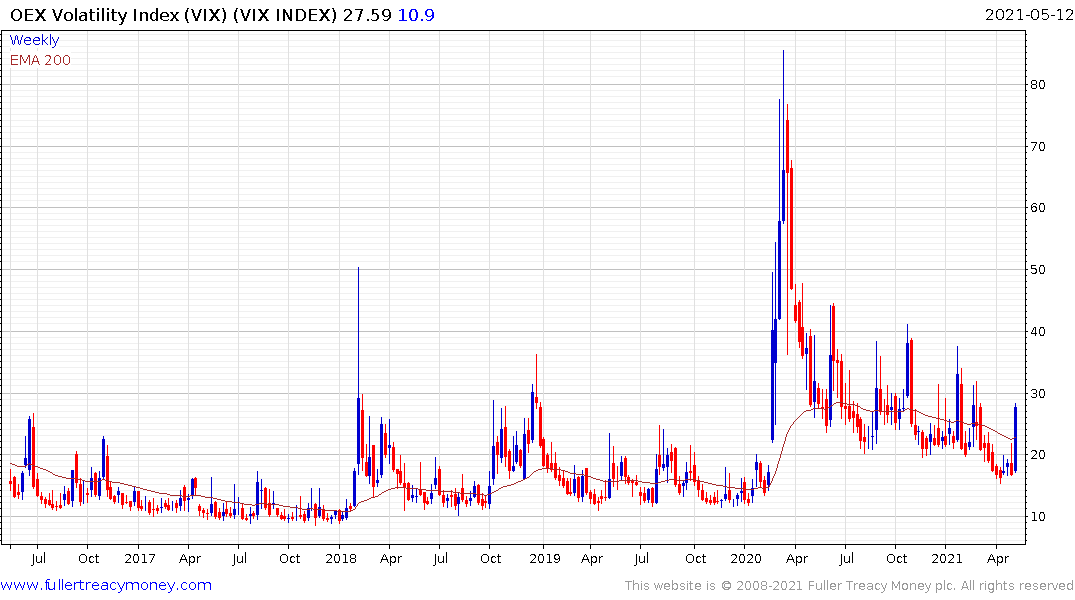 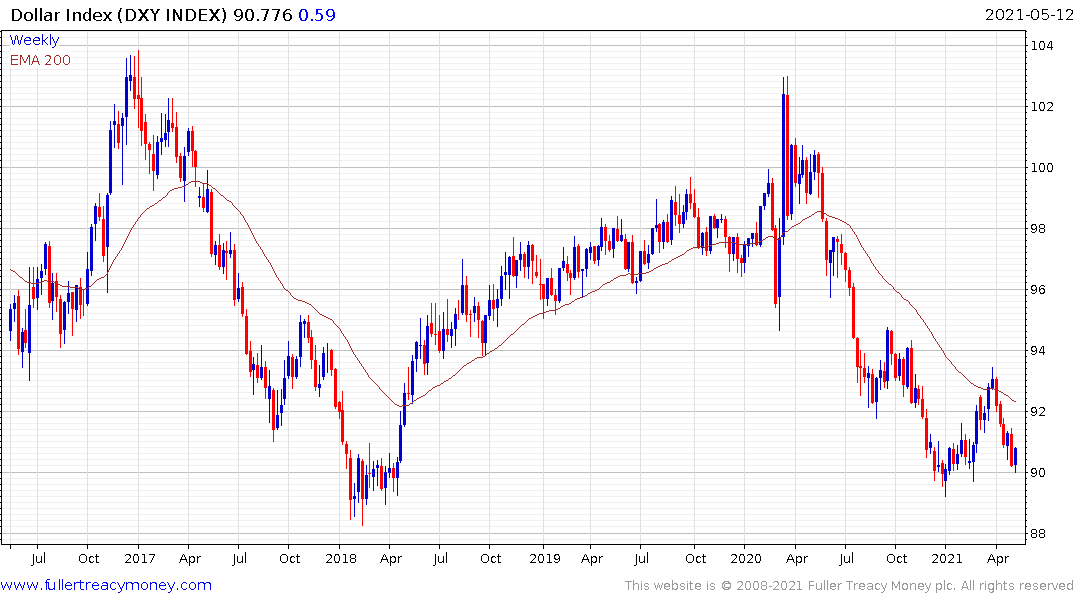 On days when bonds and equities fall together, algorithms have no choice than to reduce leverage. That creates demand for cash which is why the Dollar found short-term support today. It also results in volatility indices spiking higher which only further increases the needs for algorithms to reduce the size of positions. 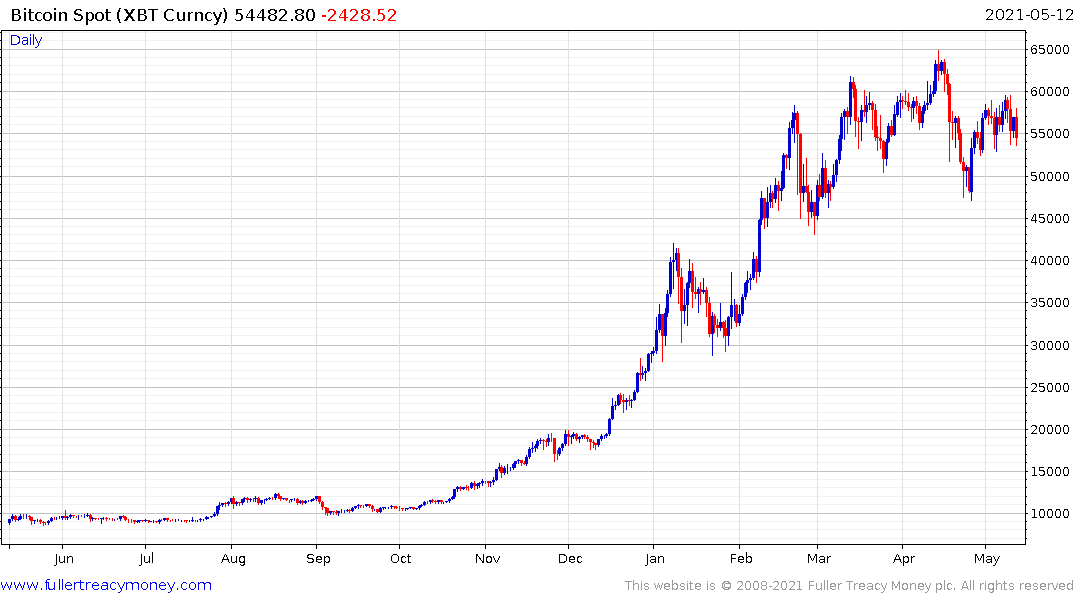 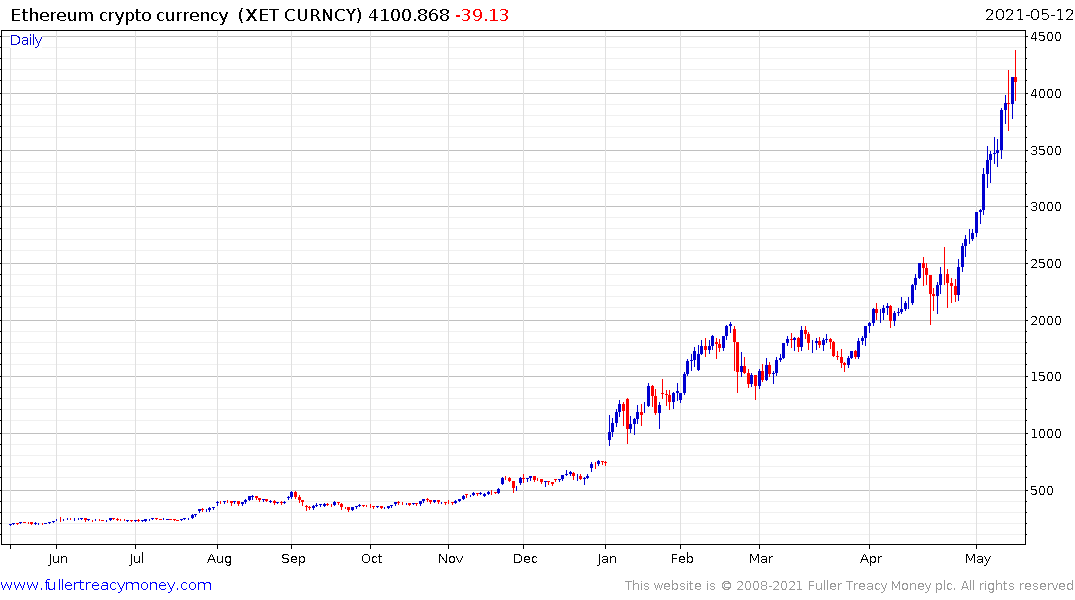 I have been quite vocal in my unpopular view that bitcoin has peaked. Instead of being the new gold, it is akin to the ultimate risk asset. The increasingly patriotic rhetoric of bulls, even as prices range below the peak, hints at desperation. If the move below $55,000 is sustained, the risk to Ethereum’s uptrend grows exponentially higher. 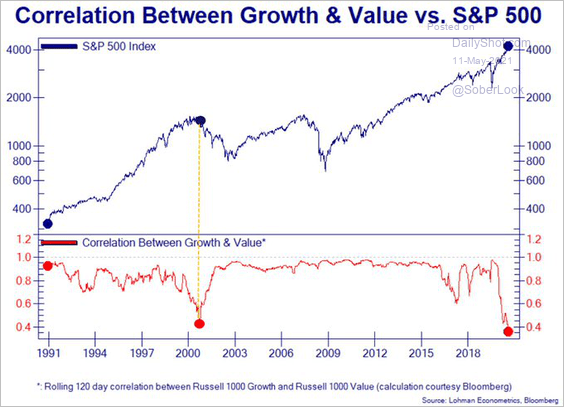 Meanwhile assets that benefit from higher rates like energy and banks continue to outperform. The ratio between value and growth has base formation completion characteristics. That suggests cashflow and real assets are likely to be the buzzwords of the coming years.

Lumber was limit down again today as the heat comes out of the home construction, home goods sectors.