On a global level, bonds with a value of about $15 trillion currently trade with a negative yield. What’s going on here?

For every investor today, the starting point must be the bond market. Just a few weeks ago, we had $17 trillion of negative yielding debt. We’re now down to about 15, but even that is way too much. This is investment money that is guaranteed to produce a loss of capital. These extreme levels in today’s bond market can only have three possible explanations. One, the world faces an economic meltdown of epic proportions. Two, the bond market is the biggest bubble we have ever witnessed, and three, we have just experienced a massive buying panic in bonds.

I agree with all three of these points so we then need to address the question of what will happen to deflate the bubble. The answer is inflation which is like kryptonite for the bond market. The only way anyone can justify buying bonds with a negative yield is if they believe the deflationary argument is self-fulfilling.

Surges in oil prices spark inflation fears so it is a market we need to monitor from a geopolitical perspective. However, it is also worth considering that the reason there has been a fall off in drilling activity is because of the steep backwardation in futures prices which inhibits hedging activity in the hydraulic fracturing sector. The most underappreciated aspect of the sector is the elasticity of supply to the price which was never possible on such a dramatic scale previously. That should contribute to less volatility in oil prices going forward, even as geopolitical tensions trend higher. 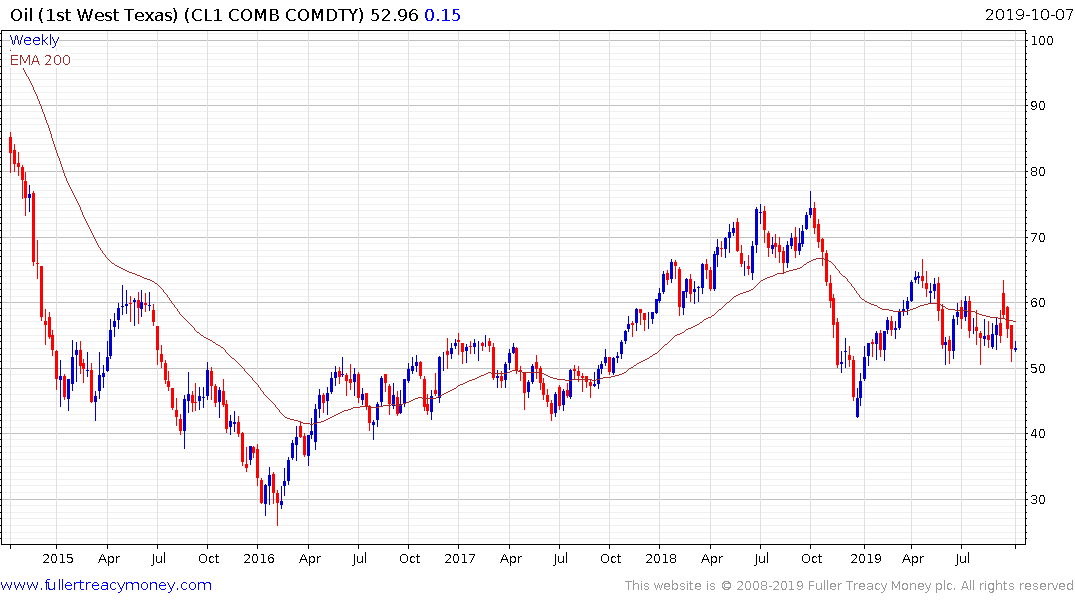 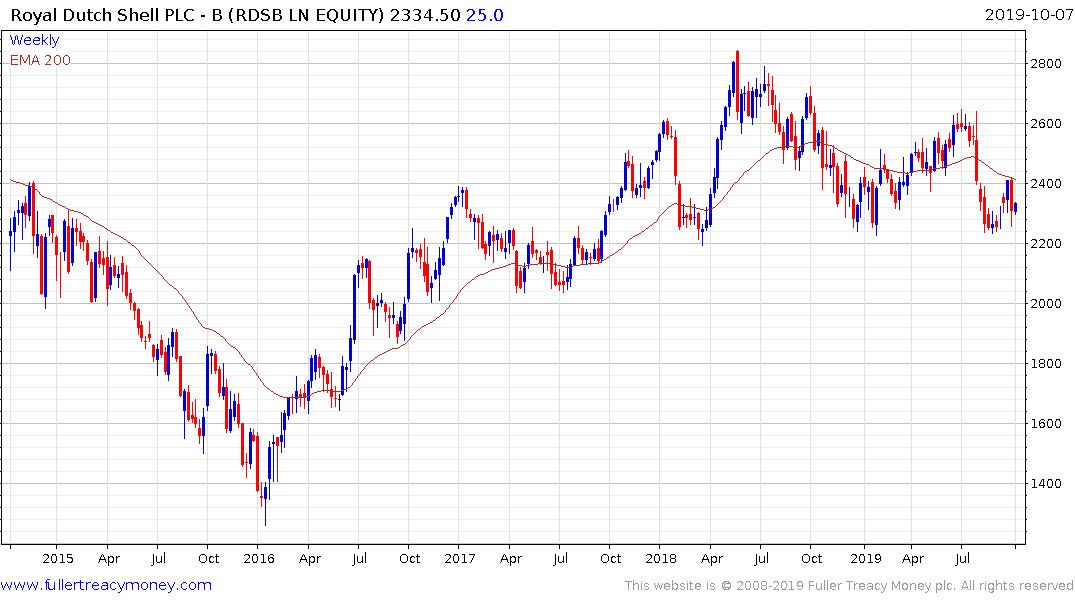 The challenge with owning high dividend paying companies in a bond bull market is they take on bond-like characteristics. Royal Dutch Shell continues to range above 2200p and currently yields 6%. It needs to hold that level if potential for continued higher to lateral ranging is to be given the benefit of the doubt. 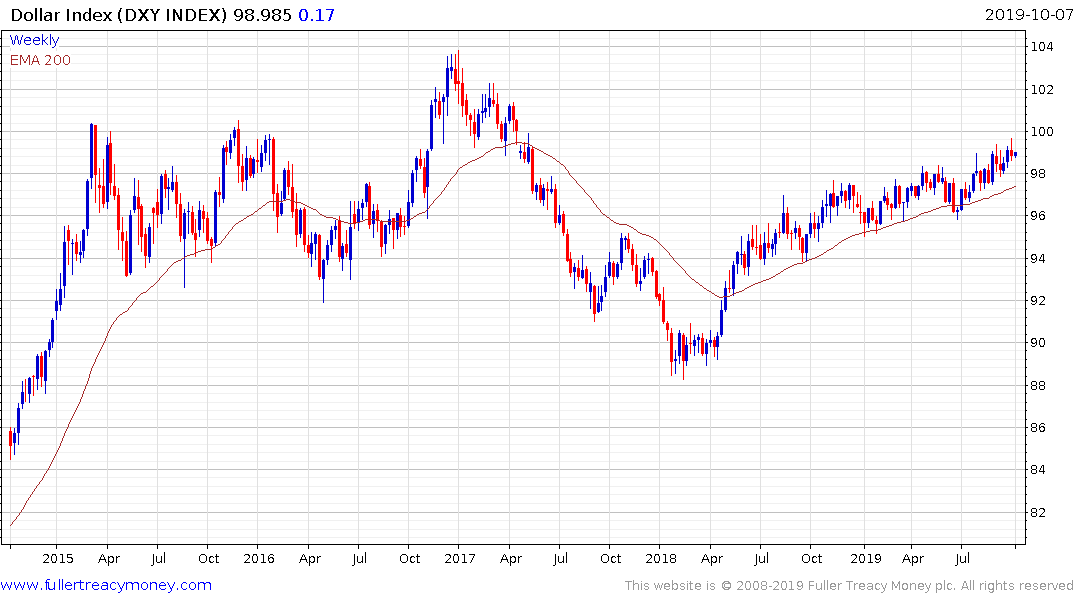 The Dollar’s strength has also been a significant factor in containing inflationary pressures. It has resulted in a Dollar shortage in the global economy which has sapped speculative interest and increased borrowing costs. It has also contained import prices to the USA even as tariffs have had an inflationary effect. The problem with the oft cited weak Dollar argument is one needs to come up with a strong Euro/Yen/Renminbi argument to counter balance it. As long as the Fed is not engaging in quantitative easing the inflation genie is likely to remain contained. Therefore, the bond market is pricing in a recession, particularly in Europe and Japan.

The Dollar Index remains on an upward trajectory and continues to hold its sequence of higher reaction lows.   sensitivity to price dictates supply

The gold market is pricing in the potential for monetisation of debts in response to the potential for slowing economy growth in much of the world. That also suggests that the massive debt load taken on will eventually need to be defaulted on, inflated away or forgiven at some stage. 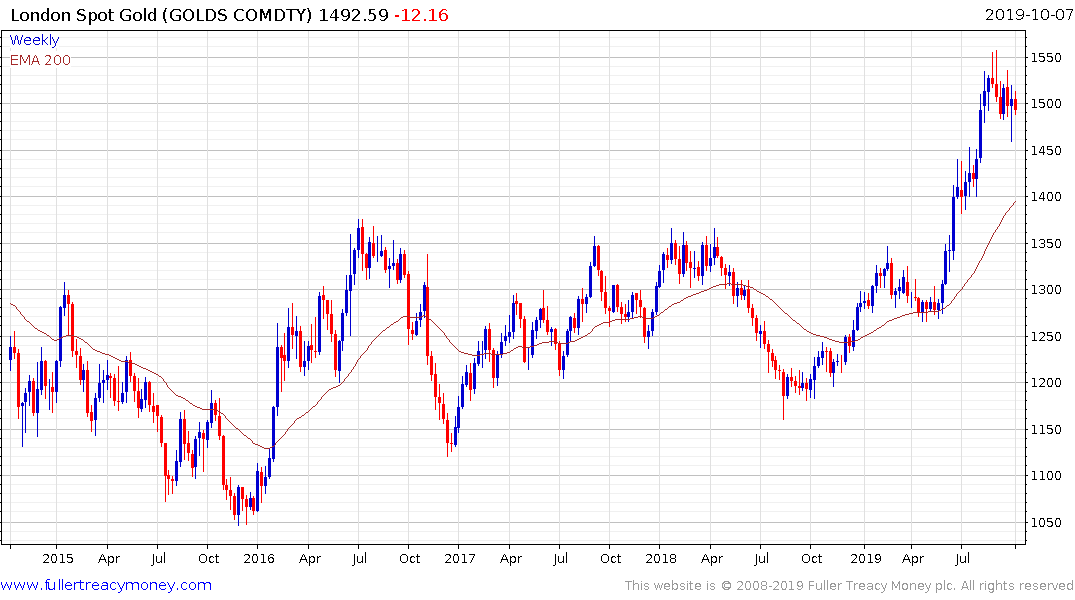 The price continues to pause in the region of $1500. There is still scope for some additional consolidation as a first step above the base forms and that has the potential to offer the next important entry opportunity.