There are signs that the strength in household goods expenditure is losing steam, possibly reflecting the recent cooling of the housing market spearheaded by Sydney. That said, the more recent data on retail spending continues to be relatively resilient, underpinned by improving trading conditions, while a lower AUD has encouraged tourism spending. ABS retail turnover growth for November (0.4%) was slightly below October (0.6%) to be 4.1% y/y, around the trend seen since late 2014. Meanwhile, NAB’s Online Retail Sales Index for November showed a 0.7% m/m rise in online spending. Despite soft wages growth, we expect a modest pick-up in consumer spending growth through to 2016, driven by a gradual reduction in households’ saving ratio and strong employment growth.

The Sydney housing market has clearly cooled, having recorded two consecutive months of price declines, while momentum in the Melbourne market has also slowed -but not as much as Sydney. Other capital cities experienced mixed outcomes in December. Recent property market outcomes are consistent with our view that prices growth will increasingly come under pressure as credit restrictions on investor lending bite, in combination with subdued incomes and slowing population growth/rising supply. We have maintained our previous forecast for much slower house price growth in 2016 (2%), although risks to the downside have escalated even more, especially in the apartment market.

Signs of stronger non-mining investment remain hard to find in the official data (especially the expectations data), while inevitable declines in mining capex continue – and could well become more pronounced given further falls in commodity prices. Despite significant signs of improvement in the business landscape, the NAB Business Survey reports that firms are still apparently gun-shy on investment. A fall in capacity utilisation in the December Monthly business survey has probably not helped, nor would recent financial market uncertainties. That said, we remain hopeful that AUD depreciation will eventually assist investment in trade exposed industries. Dwelling investment has been a little softer than expected in recent quarters, yet record high numbers of dwellings in the construction pipeline suggest the positive contribution to growth is likely to continue – although the cooling housing market will likely stem the flow of new projects.

A firmer tone on energy markets represents a tailwind for Australia as LNG shipping capacity comes on line. In fact with the rationalisation of China’s steel industry Australia needs energy to play a significant role in exports to make up for the loss of revenue from coal and iron-ore. If we take that a step further it is reasonable to expect the Australian Dollar to be more heavily influenced by moves in the oil price than was previously the case. 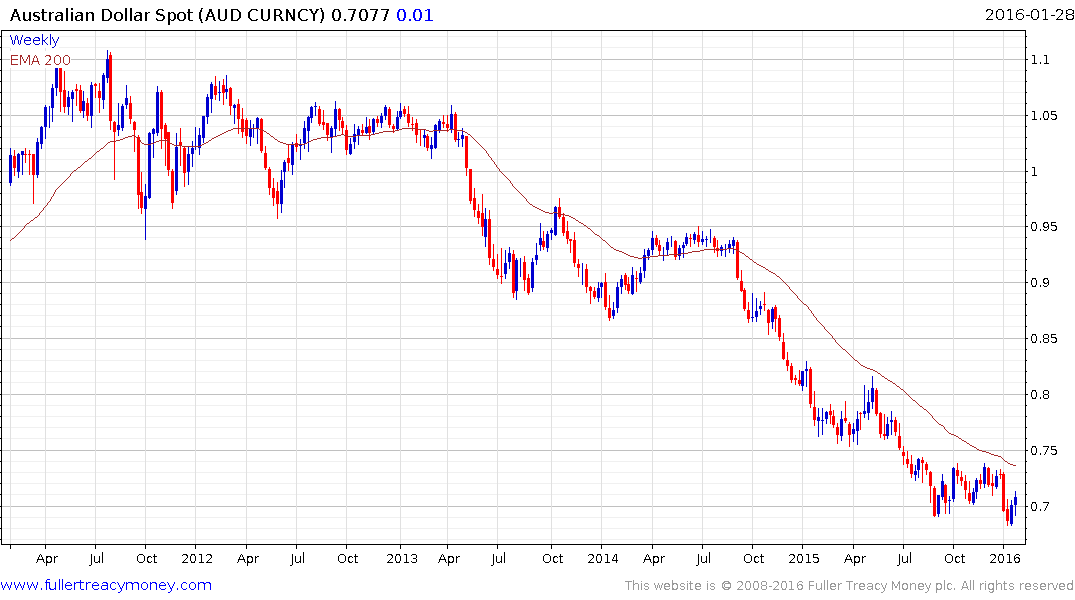 The Australian Dollar failed to sustain the break to new lows last week and is now pushing back towards the upper side of the current range and the region of the 200-day MA. How much oil bounces and the level at which it eventually stabilises is likely to influence whether the Australian Dollar can sustain a move back above the trend mean.

Considering the fact the above report takes for granted that a weakening currency will exert an additional positive influence on the Australian economy, it is worth considering what the influence of a currency that ranges more than trends might be. 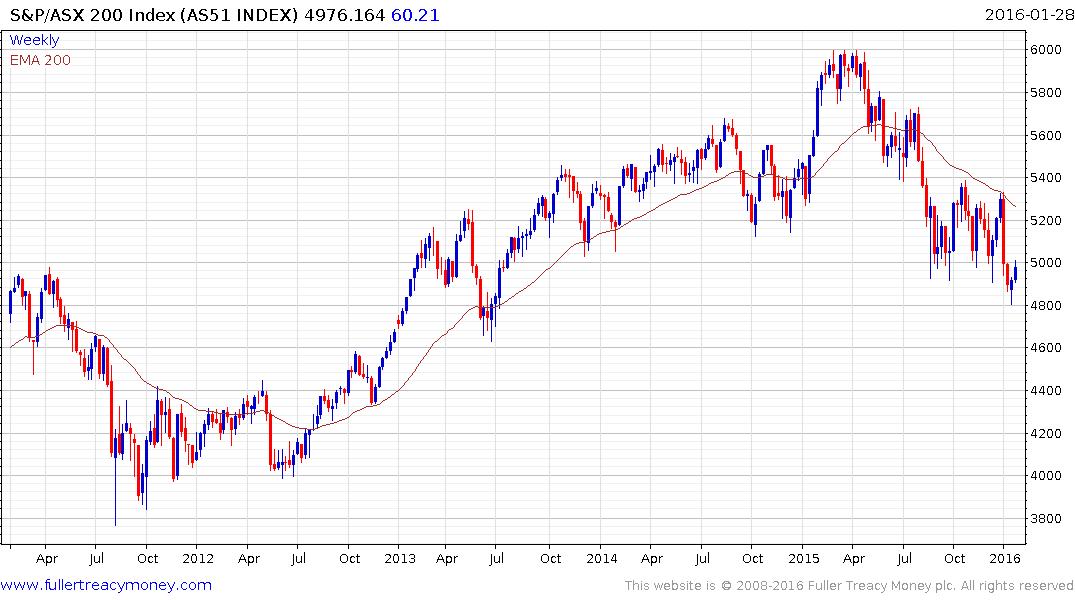 The S&P/ASX 200 Index is currently bouncing and a sustained move above 5000 would signal a failed downside break; opening up scope for a reversion back up towards the mean.  A sustained move above the trend mean will be required to signal a return to demand dominance beyond the short term.