We expect some of the “base” decline from existing shale wells to be replaced by new wells; the harder question is by how much. Operating and development costs have declined, well productivity has improved and there are large sunk costs in Appalachia (i.e., lease agreement options) that may compel many producers to keep drilling irrespective of lifecycle economics. Furthermore, if the onshore shale boom fades, we might see a revival of US offshore oil & gas production in the Gulf of Mexico. US oil production is also very sensitive to price: $55-$65 oil prices could add 1-3 mm bpd to US production when compared with JP Morgan’s $40 base case WTI price forecast. Even so, the US may now be close to peak oil and natural gas production and peak energy independence given financial pressures on the shale industry, and environmental pressures discussed next.

This report is laden with interesting graphics and statistics which highlight the challenges of developing renewable as well conventional and unconventional energy solutions. The correlation between renewable stocks and oil prices broke down late last year. That was a meaningful event and suggested the market has moved on from thinking of renewables solely in terms of cost competition with oil. That implies an alternative set of metrics is now be used to value the sector. 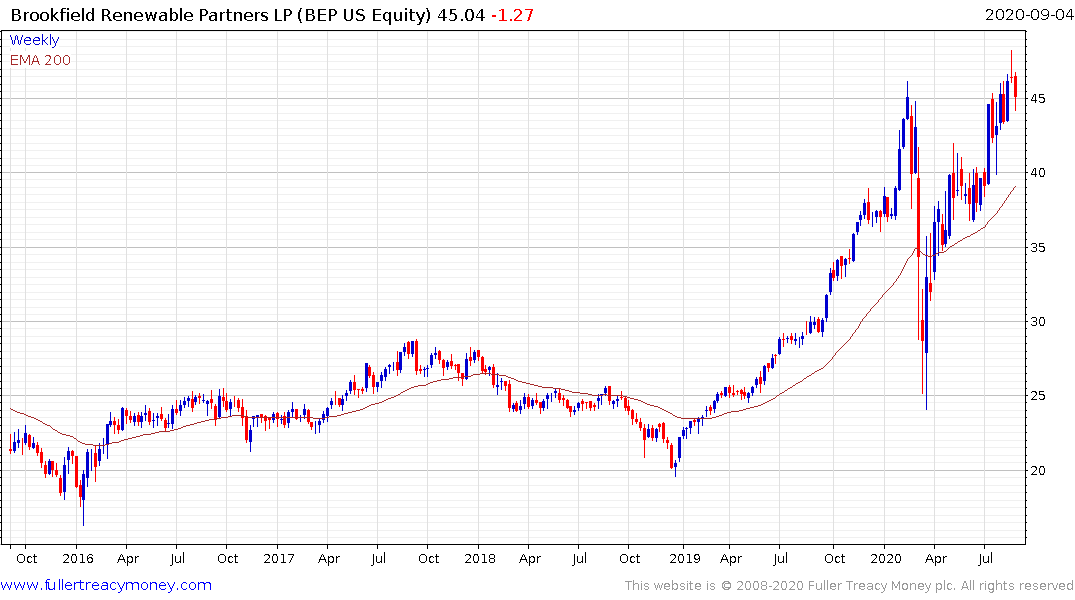 I can think of a couple of different scenarios. The first is there is an assumption carbon credit costs are only going to rise further. That assumes the regulatory arbitrage trade will expand to the whole renewables sector at the expense of the conventional oil sector. Europe has now announced a €750 billion green new deal in May.

That will incorporate both additional tariffs on emissions as well as incentives to promote renewable generation of power. At present a great deal of tax revenue comes from gasoline consumption so it is reasonable to conclude there will be additional taxes on energy consumption to make up for the shortfall. Additionally, there is the promise of a $2 trillion green new deal for the USA in the event that the Democrats win control of both houses and the Presidency in the USA’s November election.

The low interest rate environment is also created demand for investments with strong internal rates of return. With financing costs close to zero it is possible to blanket houses with solar panels. That allows companies like Sunrun to compete with utilities because they have a lower cost of capital. Low interest rates and abundant capital create demand for all manner of growth opportunities and renewables factor into that trend.

The third is the potential for technology to remake the cost competition arguments. We are living in a time of profound social, geopolitical, technology and monetary change. The bull market of the last 12 years has enhanced the perception that anything is possible.

Tesla’s cars now have the best resale value of any vehicle. Five years ago, second hand electric vehicles were worthless. Remote work, easy access to information and services is a reality. The lead time to creating vaccines to new pathogens has decreased by 70%. Reusable rockets are powering a new era of creating space related products.

These success stories make the promise of additional innovation appear more likely. 5G is only just being rolled out, Apple is about to release its first handset and the utility apps to make best use of low lag and quicker speeds are only just beginning to unfold. Solid state batteries are now expected in 2023 which is three years later than the estimates made in 2017. Wireless energy transmission holds out the promise of transmitting energy from Iceland to Scotland without the need for undersea cables or from space-based solar arrays. Nuclear diamond batteries or production ready promises of 130% efficiency solar collectors all seem within our grasp. They might just be if the low interest rate environment persists indefinitely. 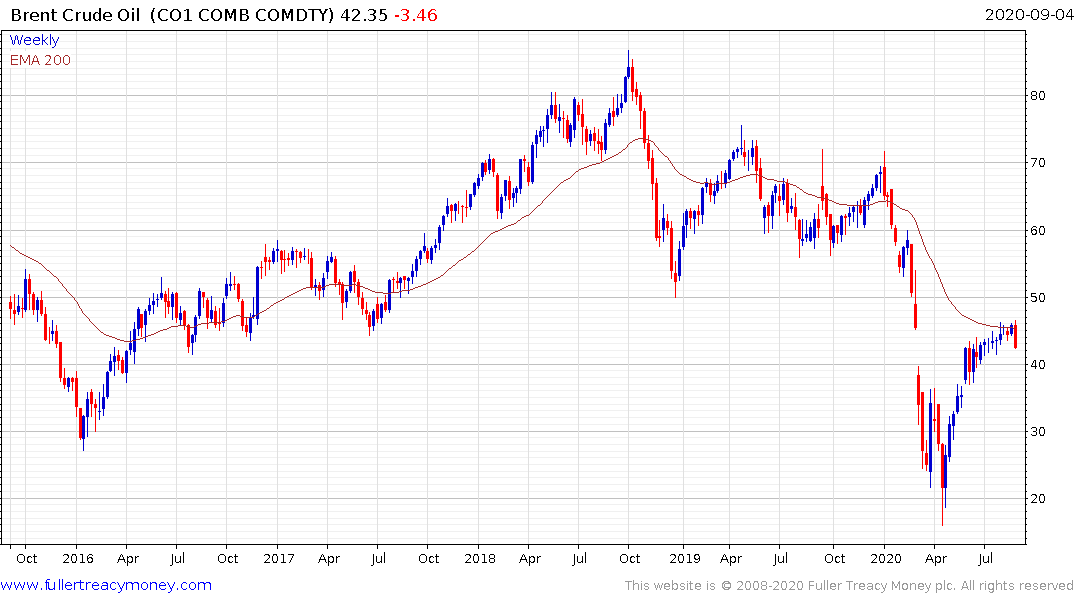 Meanwhile Brent Crude is now pulling back and the break in the short-term sequence of higher reaction lows has confirmed resistance in the region of the trend mean. I’m sympathetic to the view oil shares are uniquely unloved at present and that there is scope for the supply glut to be unwound quicker than many anticipate. However, at least a higher major reaction low and subsequent rebound above the trend mean will be required to confirm a return to demand dominance.