Mergers haven't taken off in the oil patch this year largely because potential targets have been banking on a rebound and potential buyers have been expecting further falls. The spike in yields for borrowers in the energy sector, along with the growing acceptance that oil and gas prices likely face another year on their back, should mean those opposing views finally converge in 2016, prompting some deals.

What's more, this chart suggests the advantage should lie with large, strategic buyers like the oil majors for two reasons.

First, one way potential targets have been shoring up balance sheets is to sell assets rather than the entire company.

But a thriving asset market requires buyers being able to raise capital at reasonable rates, be they other E&P companies or private equity firms looking to snap up bargains. Asset sales have slowed already this year, with just $29 billion worth in North America, compared with $107 billion in 2014, according to data compiled by Bloomberg.

Second, with the cost of capital rising and cash harder to come by, any deals struck will require at least the promise of synergies and will favor those buyers able to use their own stock as a credible acquisition currency. One reason Anadarko's approach to Apache met with such scorn was that it scattered rather than tightened the company's focus. The majors, diversified anyway, bring the benefit of bigger balance sheets, which both alleviate any credit pressures weighing on the target and provide a clearer path to developing a smaller E&P company's reserves. Paying with shares also means that selling shareholders get to participate to some degree in the eventual recovery in oil and gas prices.

Major oil companies have slashed exploration budgets with the result they have more capital to pick up promising assets as prices decline. Private Equity firms have amassed sizable war chests to invest in troubled energy companies but have so far been slow to make large purchases. Meanwhile sellers are hoping for a rebound so they can get a better price. With everyone appearing to bide their time a catalyst is required to encourage deal making.

A bankruptcy at a high profile company would signal prices have fallen enough to justify taking the risk associated with buying troubled assets. A rally in the oil price would give valuation metrics the confidence to conclude a low has been reached following an accelerated decline. 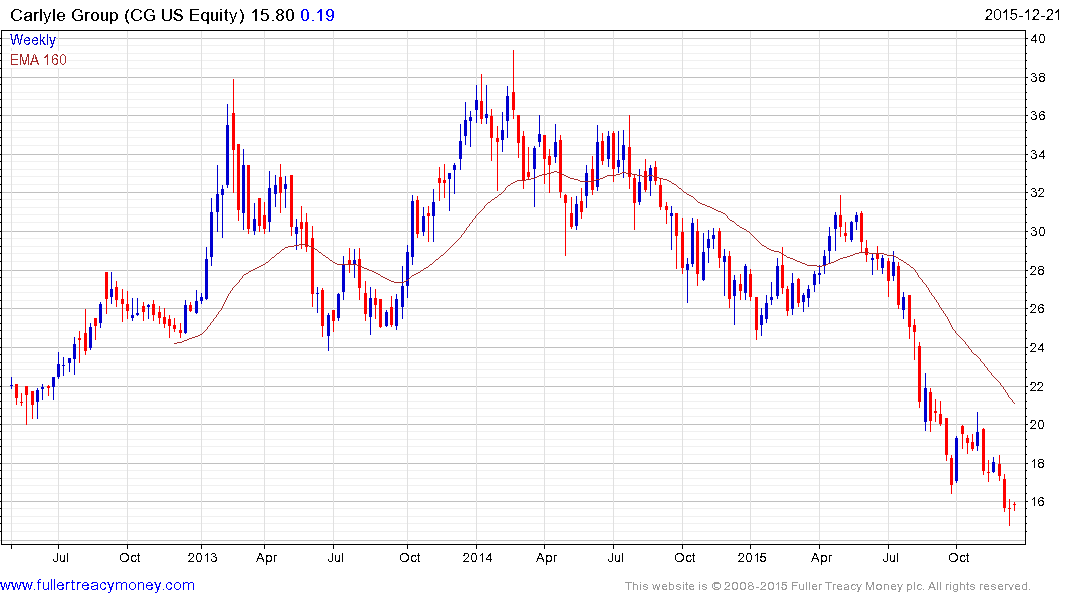 Private Equity firms such as Carlyle Group have fallen in sympathy with oil companies amid fears the 14% yield cannot be sustained amid such low energy prices. The share has at least paused following a 50% decline since June but a clear upward dynamic will be required to check momentum. 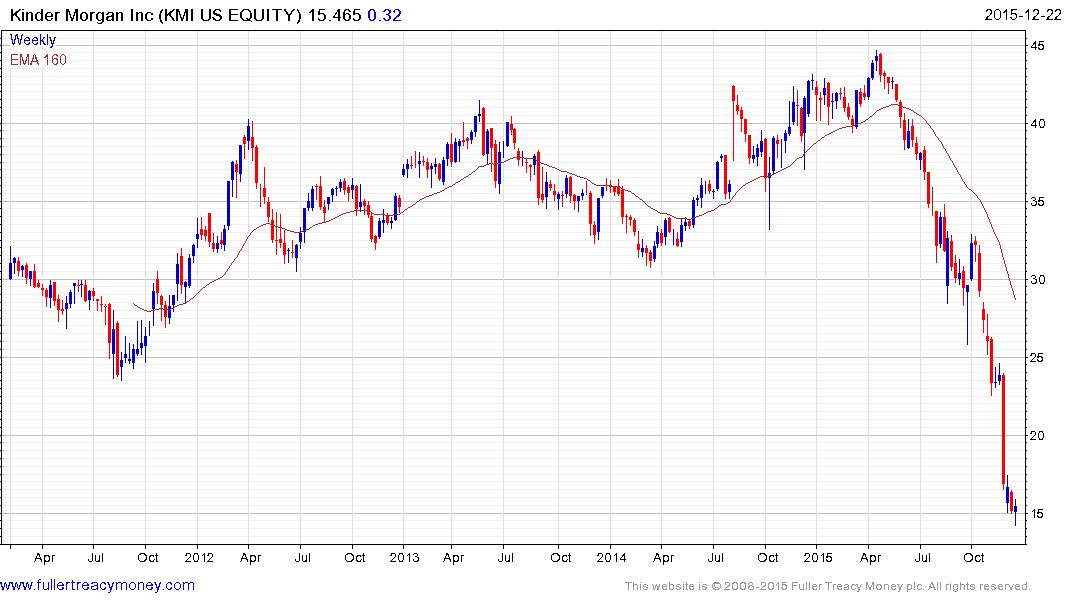 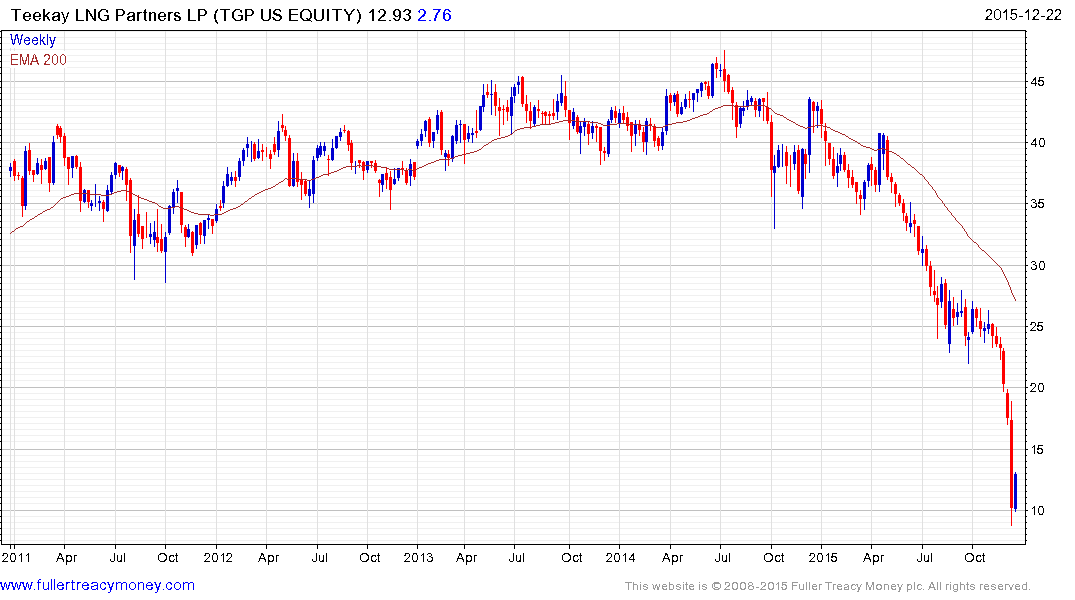 Among companies that have been forced to slash dividends to avoid having to raise additional capital both Kinder Morgan and Teekay LNG partners have found at least near-term support and potential for reversionary rallies has increased. 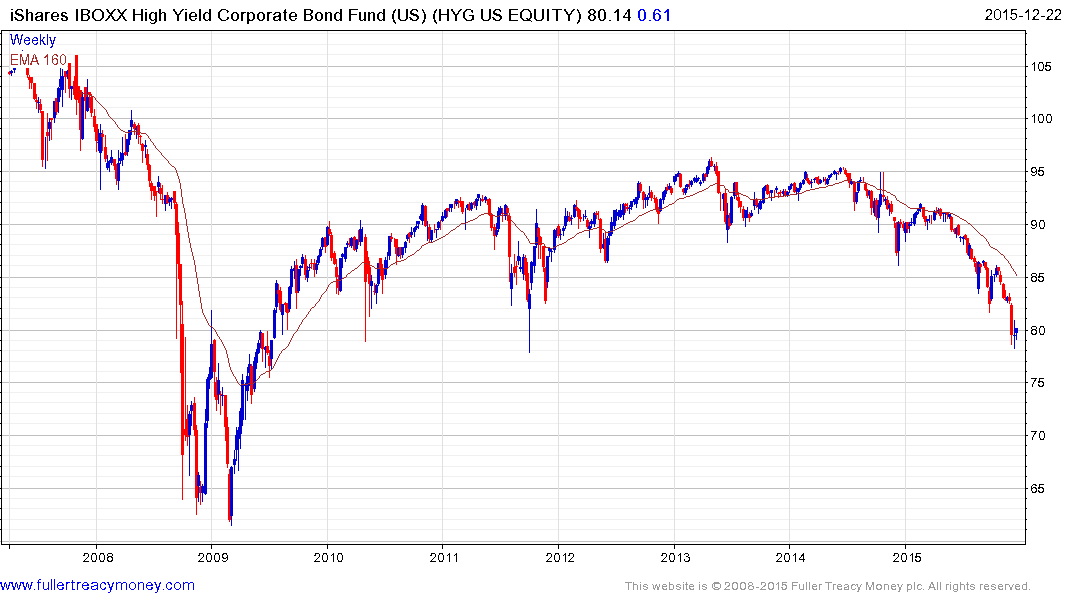 Outside the energy sector, the iShares iBoxx $ High Yield Corporate Bond ETF has at least paused in the region of the 2010 and 2011 lows and the yield has climbed to 5,9%. As bargain hunters begin to perceive value at least near-term support has been found and potential for a reversionary rally is improving. A sustained move above $85 would be required to question the medium-term downward bias. 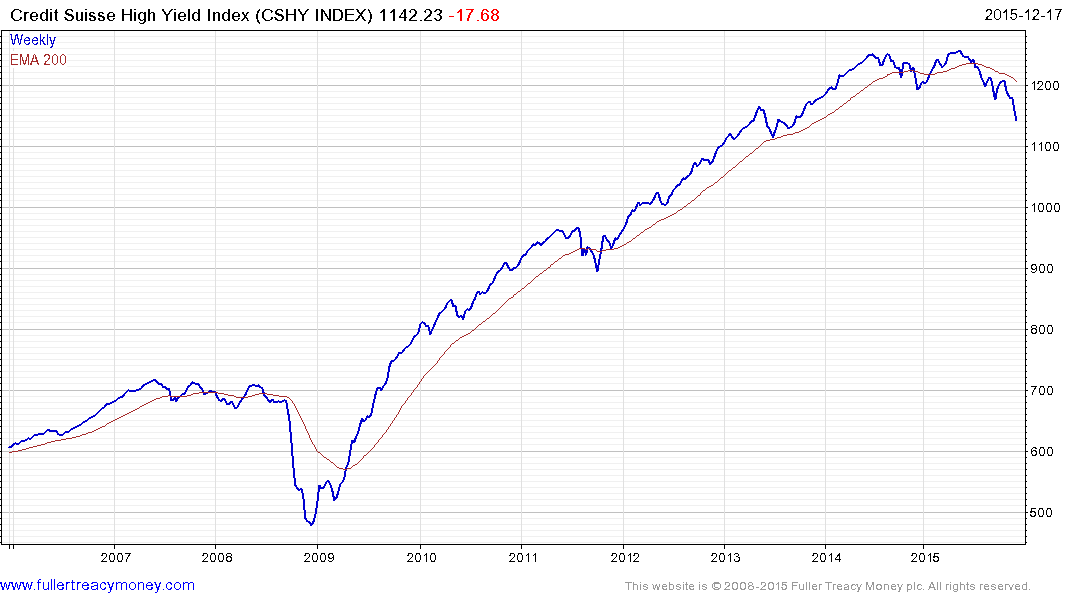 The Credit Suisse High Yield (total return) Index completed a Type-3 top in September, encountered resistance in the region of the trend mean from October and continues to extend the downtrend. This represents the most significant loss of uptrend consistency since 2008 and a sustained move above 120 would be required to question medium-term supply dominance.

The Credit Suisse chart above highlights how total return has been affected by the high yield sell-off and illustrates how sensitive the sector is to spreads beginning to widen from what were tight levels.