SMA Solar Technology AG, a German solar company that’s cutting a third of its staff to reduce costs, rose to a three-week high in Frankfurt after first-quarter sales jumped and losses narrowed.

SMA climbed as much as 5.9 percent to 14.50 euros, the highest intraday level since April 23, after saying sales grew 28 percent to 226 million euros ($254 million) and a loss on earnings before interest and taxes narrowed to 5.4 million euros. Sales were driven by large-scale solar projects in North America, Japan, the U.K. and Australia, it said.

“With the sales generated and the order backlog at the end of the first quarter, we have already achieved more than 60 percent of our sales target for the year,” Chief Executive Officer Pierre-Pascal Urbon said. “The earnings situation developed better than planned, partly due to the reduction of fixed costs already initiated and to exchange rate effects.”

Solar cells produce direct current but if you want to it to power your home, heat your water or sell electricity back onto the grid it needs to be inverted into alternating current. Therefore everyone who buys solar cells must also buy an inverter. While SMA Solar is a global leader in manufacturing inverters it is not the cheapest. 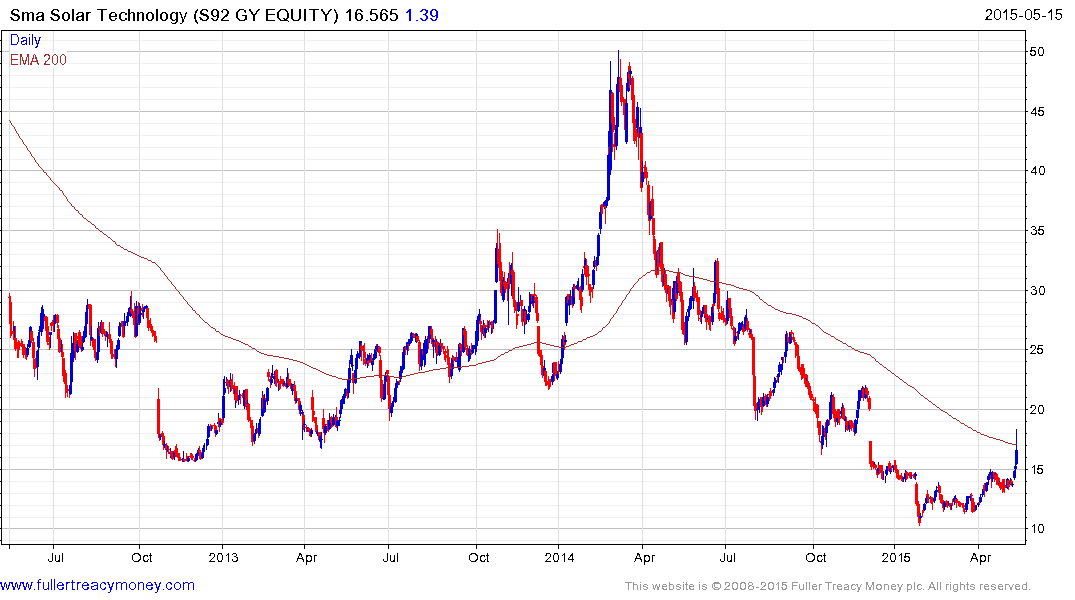 In addition to the rationalisation the company is going through, its home battery solution may be a potential European competitor to Tesla. The share price collapsed from €100 in 2010 to a February low of €10. It has held a progression of higher reaction lows since and rallied this week to test the region of the 200-day MA. A sustained move above it would confirm a return to demand dominance beyond the short term.