In the US the refining margin based on domestic crudes as feedstock have stayed strong and hence justified refinery throughput at US refineries a massive 830 kbd higher than the prior year on a 4-week moving average basis. In Europe the throughput at refineries in EU was down 366 kbd vs the prior year in January and 836 kbd down in December. This is the flip side of the US shale story and shows how this has a global effect on oil prices. The last half a year the average refinery throughput in EU is down 900 kbd, while for US refiners the average throughput is up more than 600 kbd for the same period. This is the answer to why the lost Libyan barrels have not been able to send the Brent-price higher. We have not only lost a lot of crude supply to Europe, we have lost a lot of crude demand as well. This lost demand for crude in Europe is due to US refiners taking market share from European refiners and this is a direct consequence of the US shale revolution. US refiners have both cheaper feedstock and cheaper operating costs, so how can European refiners compete? One year ago Libya produced 1.4 million b/d but output started to decline in June and fell to almost nothing in November/December. Still the Brent price has continued to trend lower since August last year when it priced as high as 117 $/b at the highest. That is quite remarkable noting that Libyan production the last half a year is down 1.1 million b/d on average vs the year before and knowing that most of the Libyan crude normally feeds European refineries.

The US refineries are entering maintenance season which according to a survey by PIRA Energy should peak in March/April this year. US crude demand should drop by about 800 kbd from January to March, purely based on maintenance schedules. The important Padd 2 region (The Midwest, where Cushing Oklahoma belongs) is scheduled to lose 300 kbd of crude demand from January to March and this may halt the decline in Cushing crude stocks in the coming month as it is should be worth more than 2 million barrels stock build per week, all else being equal.

The USA may have a ban on crude oil exports but that does not apply to refined products. As a result of lower input costs and the spread between domestic and international pricing, the USA became a net exporter of refined products in the last few years which has been of substantial benefit to related companies. 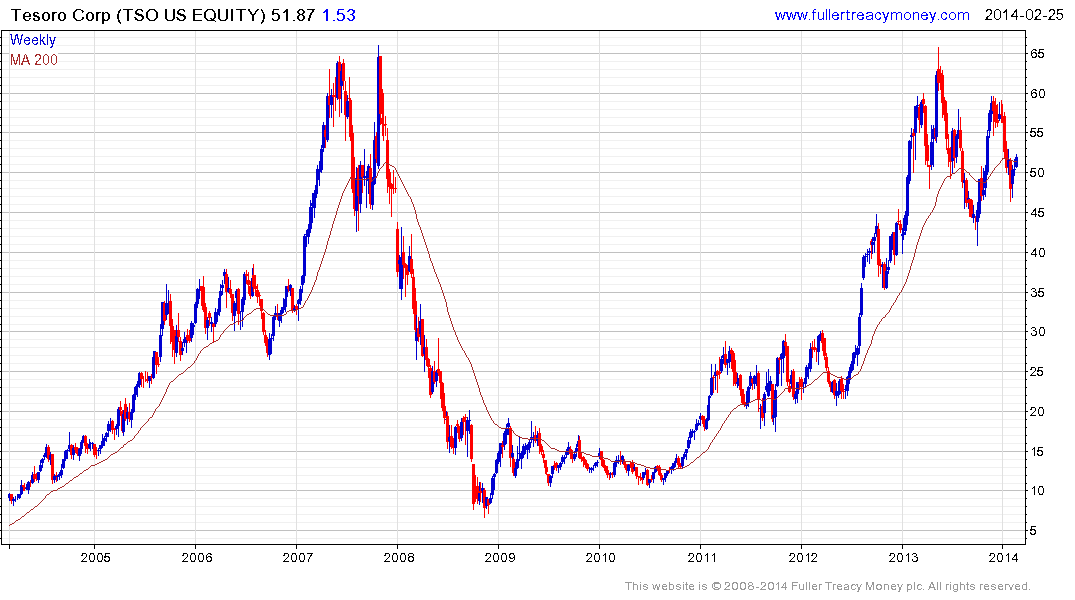 Most of the larger companies hit medium-term peaks in early 2013 following impressive rallies and have spent much of the last year consolidating. Tesoro tested its 2008 peak near $65 a year ago and pulled back to find support near $40 by October. It found support above that level from earlier this month and a sustained move below $46 would be required to question potential for additional higher to lateral ranging. 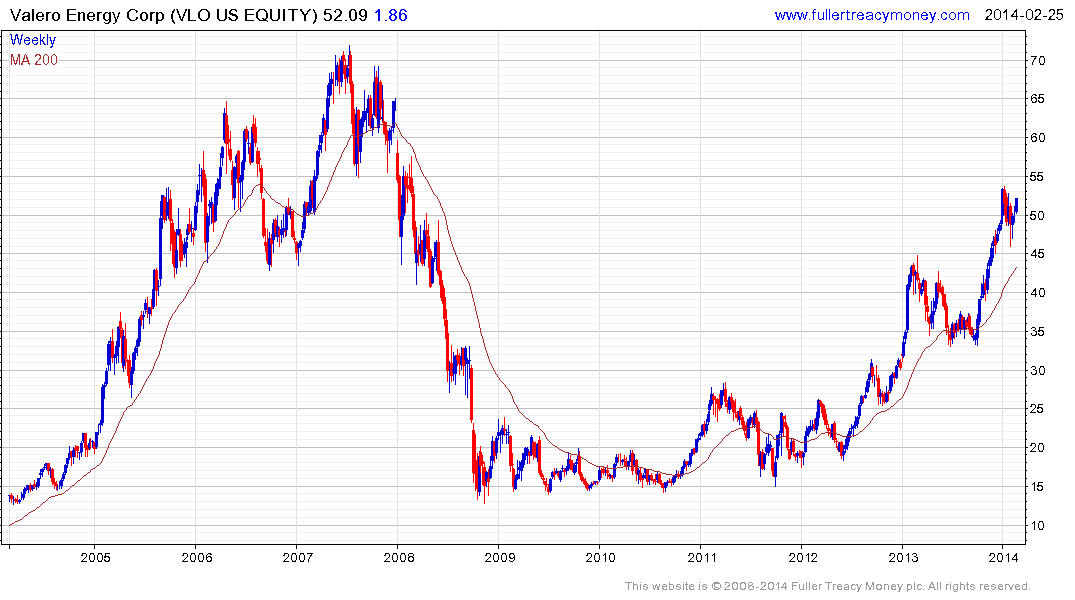 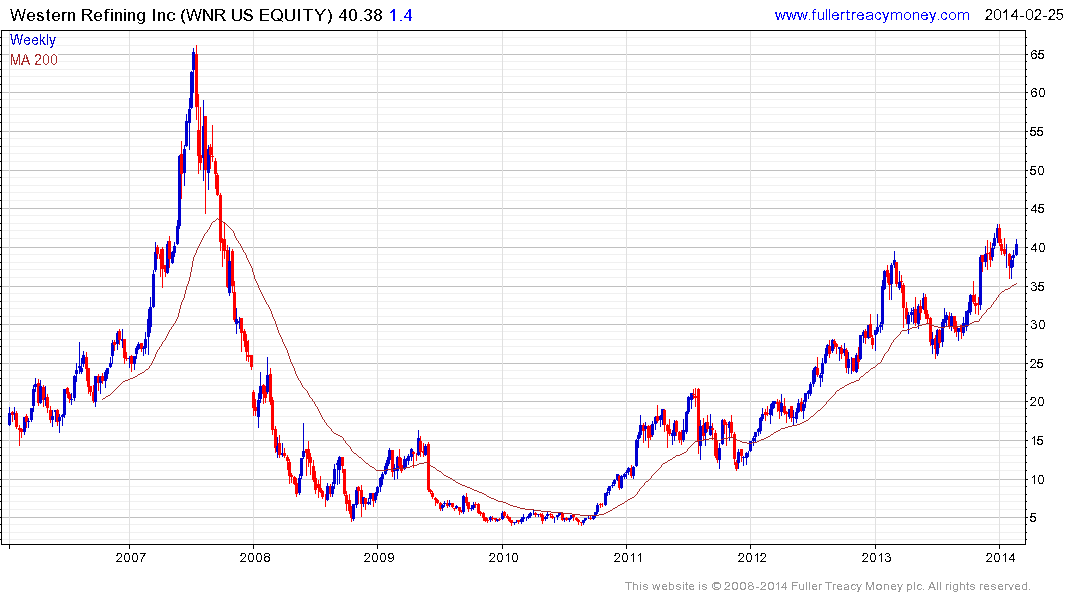 Both Valero and Western Refining also pulled back but found support earlier and hit new highs in October. Sustained moves below their respective 200-day MAs would be required to question the consistency of their advances. 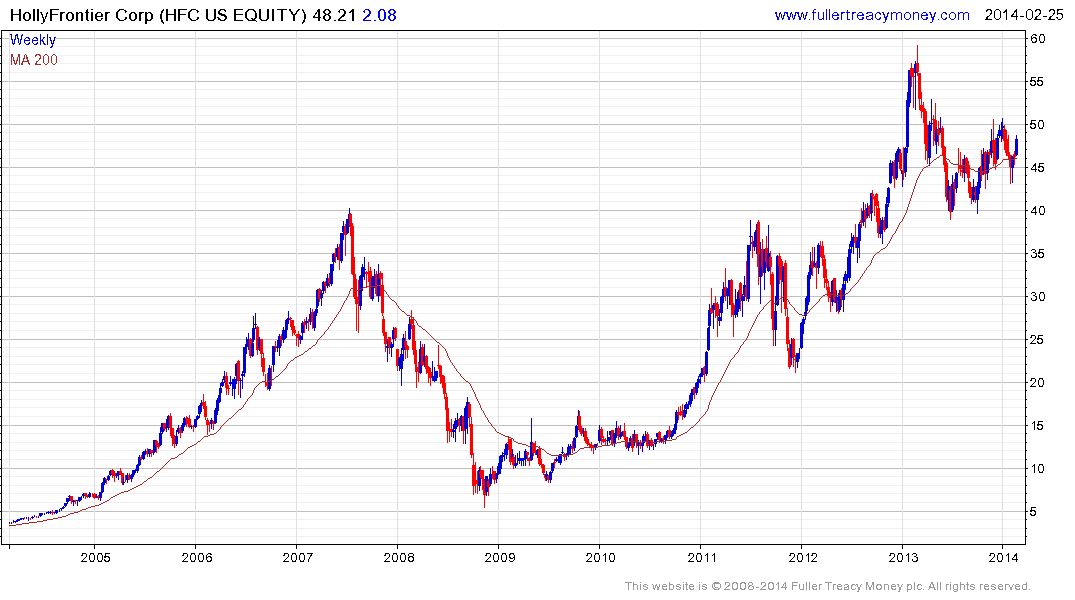 HollyFrontier also pulled back sharply but has held a progression of higher reaction lows since July and a break in this sequence would be required to question potential for additional higher to lateral ranging. 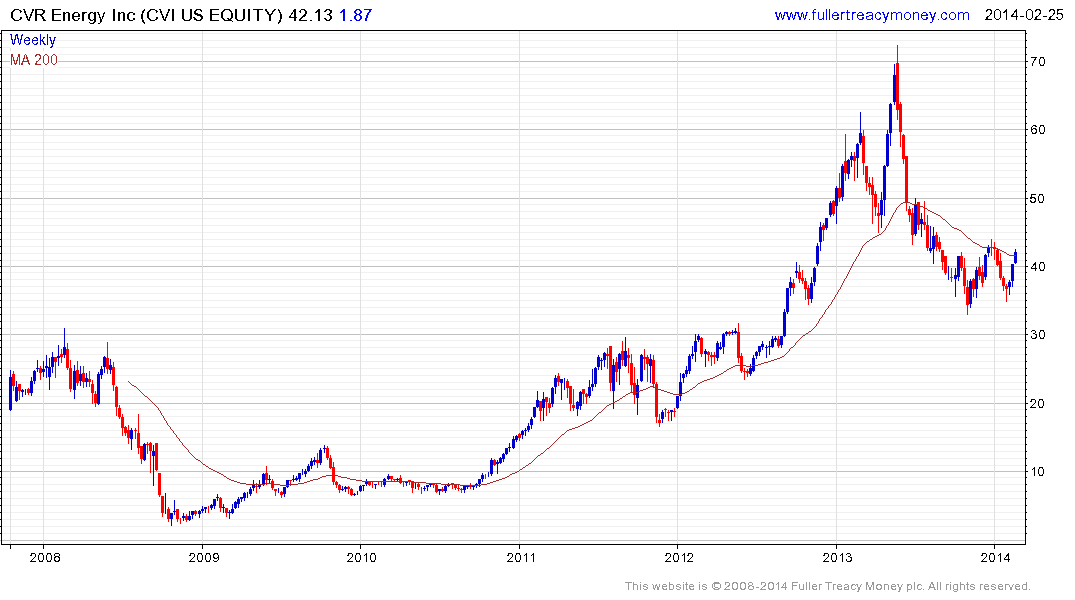 CVR Energy paid two large special cash dividends in 2013 which contributed to volatility. However, the share has stabilised near $35 and a sustained move below that level would be required to question potential for additional steadying in this area. 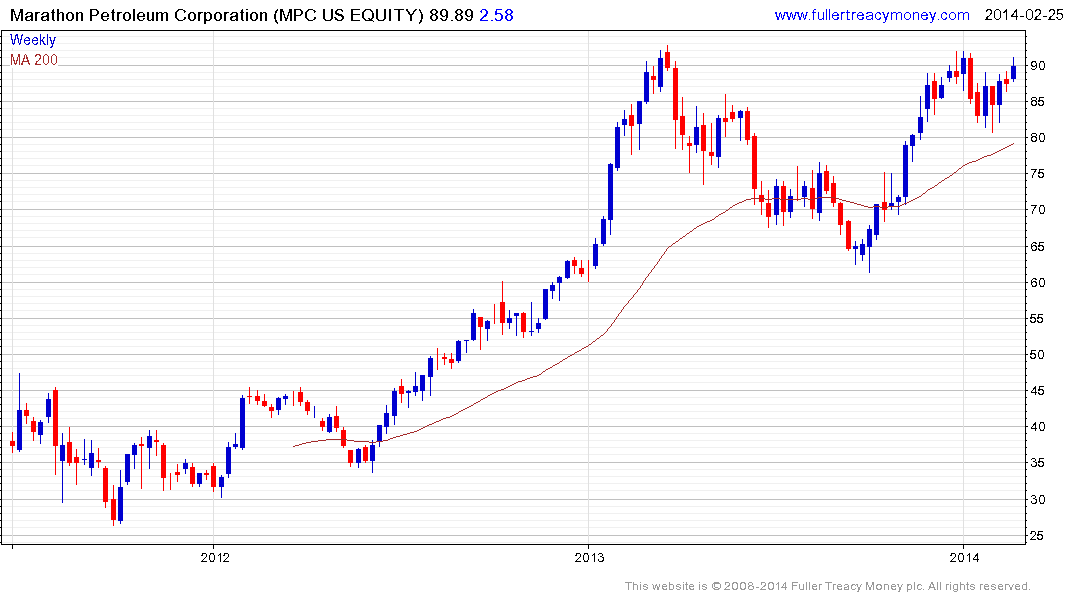 Marathon Petroleum Corp has been consolidating in the region of the 2013 peaks since the last week of December and a sustained move below $80 would be required to question potential for a successful upward break.