Some 1,000 vessels are broken up every year and their steel and other metals are melted or simply stacked up and sold to factories. The yards in the Indian subcontinent recycle around 80% of all ships, with the remainder going to China and Turkey, although Beijing has said it will suspend scrapping starting next year.

The average age of VLCCs going to scrap this year is 18.8 years, the youngest since 2013, according to VesselsValue. A ship’s average operational age is around 25 years, but after 15 years in the water, the vessel has to go through an extensive survey to determine if it is seaworthy. “An average survey costs about $2 million, and you have to do it again at 20 years, so a number of owners opt to scrap instead,” Mr. Sharma said.

The oil glut is also sending offshore rigs to scrapyards. It is a relatively new business that has boomed over the past five years, as the cost of drilling at sea is much higher than inland exploration. At least 18 rigs have been broken up so far this year, compared with 46 last year, according to GMS.

The cost of maintaining a fleet of aging ships has risen considerably over the last few years because of the imposition of the long-awaited restrictions on bilge water discharge and environmental restrictions on diesel fuel. That is in addition to the cost of supporting vessels in a hostile maritime environment. These costs are helping to remove excess inventory from the market after a lengthy bear market. 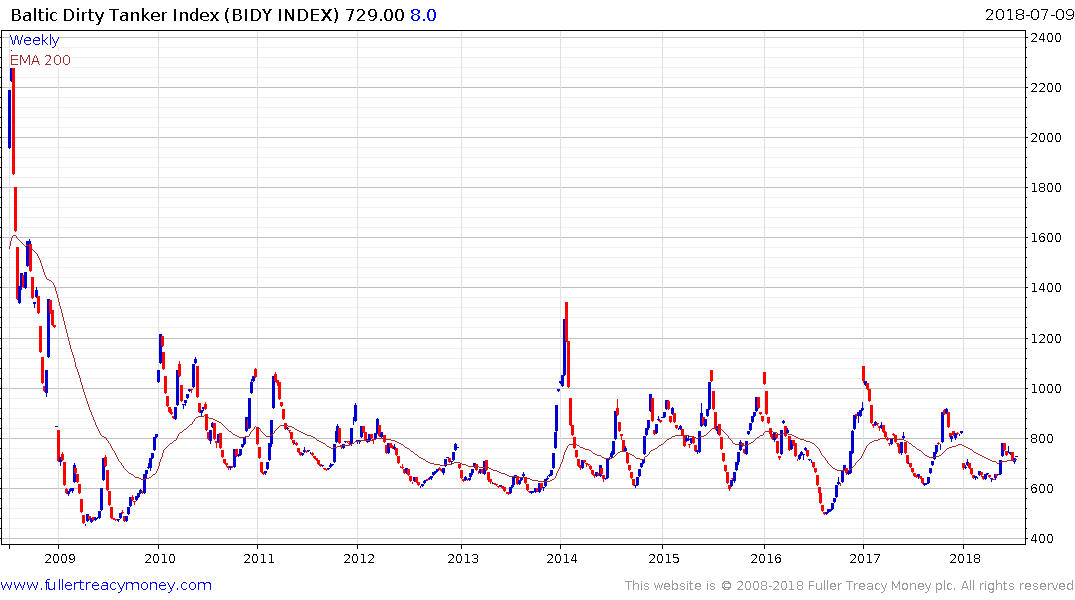 The Baltic Dirty Tanker Index has been in a base formation since collapsing in 2009, is currently towards the lower side of that range and is currently developing a triangular pattern which generally gives way to an emphatic breakout. 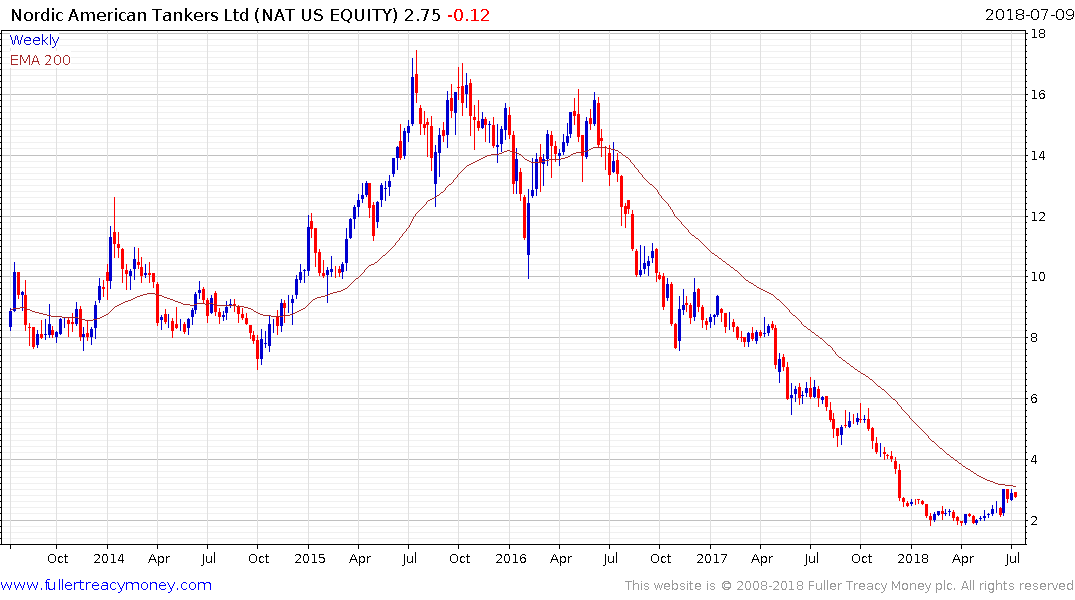 Nordic American Tankers collapsed from its 2015 peak near $16 to a low February near $1.80. It bounced in June from the $2 area and a sustained move below that level would be required to question support building. 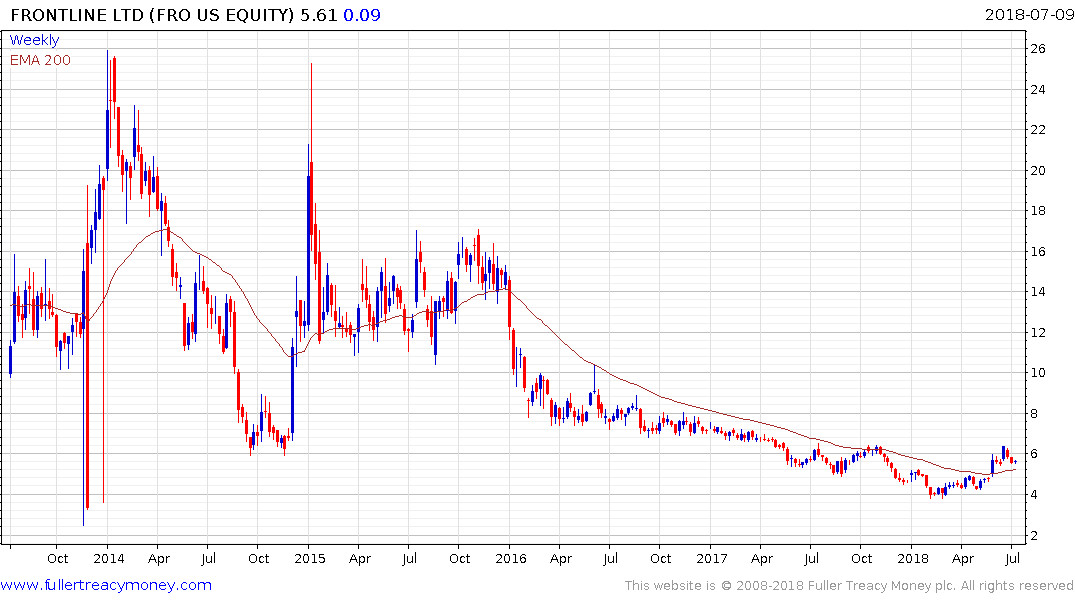 Frontline has rallied over the last couple of months to break a medium-term progression of lower rally highs. 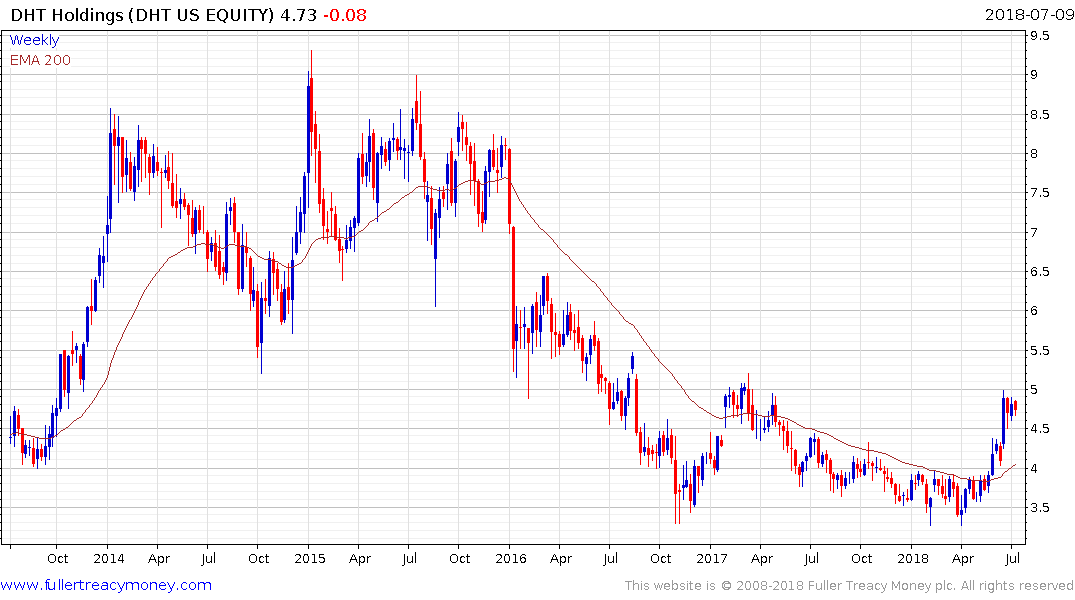 DHT Holdings has bounced since early June to retest the early 2017 highs which represents the upper side of a developing two-year base.