Shale Drillers Are Now Free to Export U.S. Oil Into Global Glut
Comment of the Day

U.S. shale drillers will soon be able to sell their oil all over the world. Too bad no one needs it right now.

A congressional deal to lift the 1970s-era prohibition on shipping crude overseas has the potential to unleash a flood of oil from Texas and North Dakota shale fields into markets already flush with cheap supplies from the Persian Gulf, Russia and Africa.

The arrival of U.S. barrels in trading hubs from Rotterdam to Singapore will intensify competition for market share between oil-rich nations, publicly traded producers and trading houses, adding pressure to prices that have tumbled 67 percent in the past 18 months. In the longer term, it may also extend a lifeline to shale drillers strapped for cash after amassing huge debt loads during the boom years.

“The winners in all of this are the U.S. oil producers who now have a bigger market for their shale” output, said Gianna Bern, founder of Brookshire Advisory and Research Inc. in Chicago and a former BP Plc oil trader. “Unfortunately, it’s coming at a time when there’s already way too much crude on the global market.”

U.S. oil explorers from Exxon Mobil Corp. to Continental Resources Inc. have been agitating for an end to the export ban for most of this decade as technological advances in drilling and fracking opened up vast, untapped reserves of crude. The so- called shale revolution has lifted U.S. oil output for seven straight years, making the nation the world’s third-biggest producer behind Russia and Saudi Arabia.

2016 is going to be an important year for US energy producers. One way to look at it is that they are going to be running slimmer operations since they had to cancel so much spending amid a collapse in prices. Another way to look at it is they will have the ability to export both crude oil and natural gas for the first time in decades and that will contribute to increasing fungibility between international contracts.

This is less important for oil than for natural gas where US prices are well below their international counterparts. For example UK gas prices are currently almost three times higher than the Henry Hub futures price. Asian prices would be even higher. 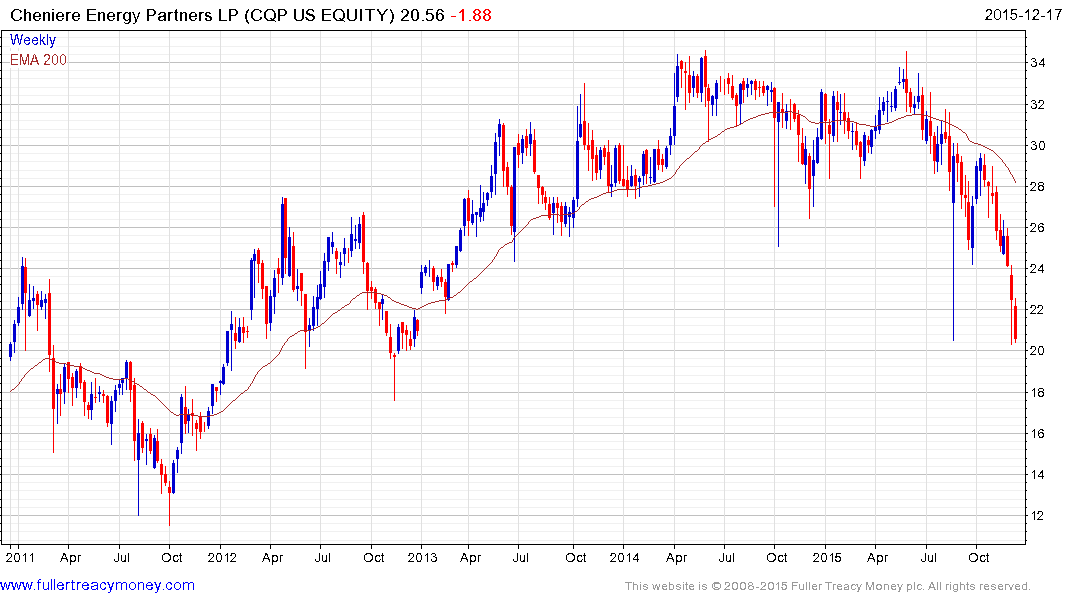 Following years of development Cheniere Energy’s first shipments begin in January as the first LNG export facility for the USA opens for business. However, that does not appear to be what investors are focused on right now. 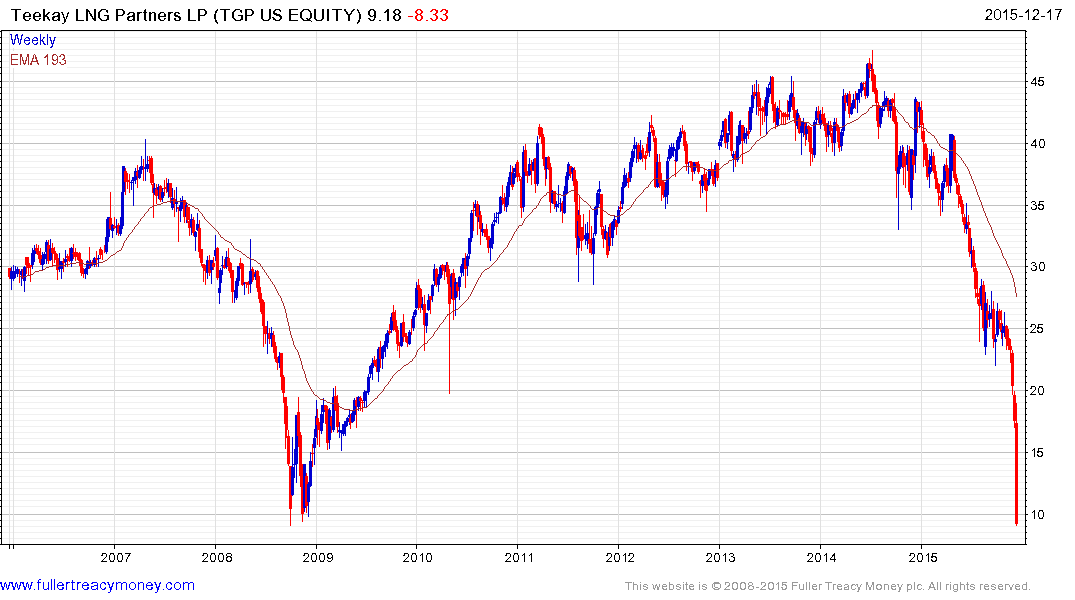 Teekay LNG LP slashed its dividend today to avoid having to raise capital which saw its share price fall 48% at the low. This follows last week’s announcement Kinder Morgan is following a similar strategy.

Many investors participated in MLPs to benefit from their high dividends and are now deserting the sector in droves as rationalisation to handle high debt loads replaces expansion. Valuations are improving rapidly and bargain hunters are beginning to assess pieces of infrastructure on their individual merits.

Cheniere Energy Partners LP has not fallen as much as some but has certainly not been immune. The share is currently testing the region of the August lows and the sustainability of its dividend is probably going to be the arbiter of whether this level holds. 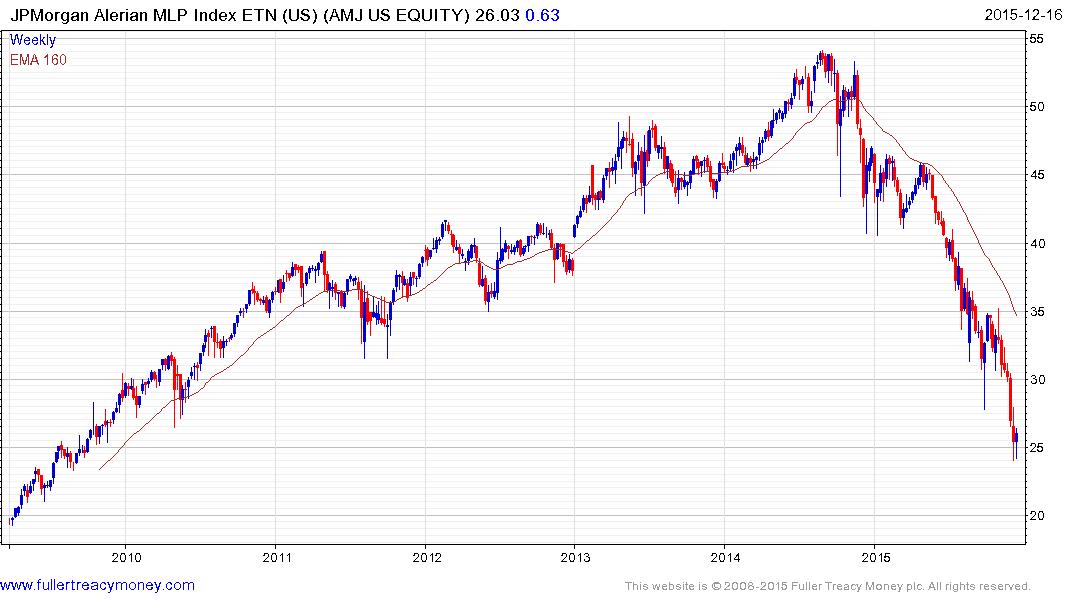 As the largest publicly traded MLP Enterprise Products Partners LP represents a significant weighting in the Alerian MLP ETF. The share has at least paused in the region of $20 and while there is scope for some steadying a break in the medium-term progression of lower rally highs would be required to check the consistency of the downtrend. 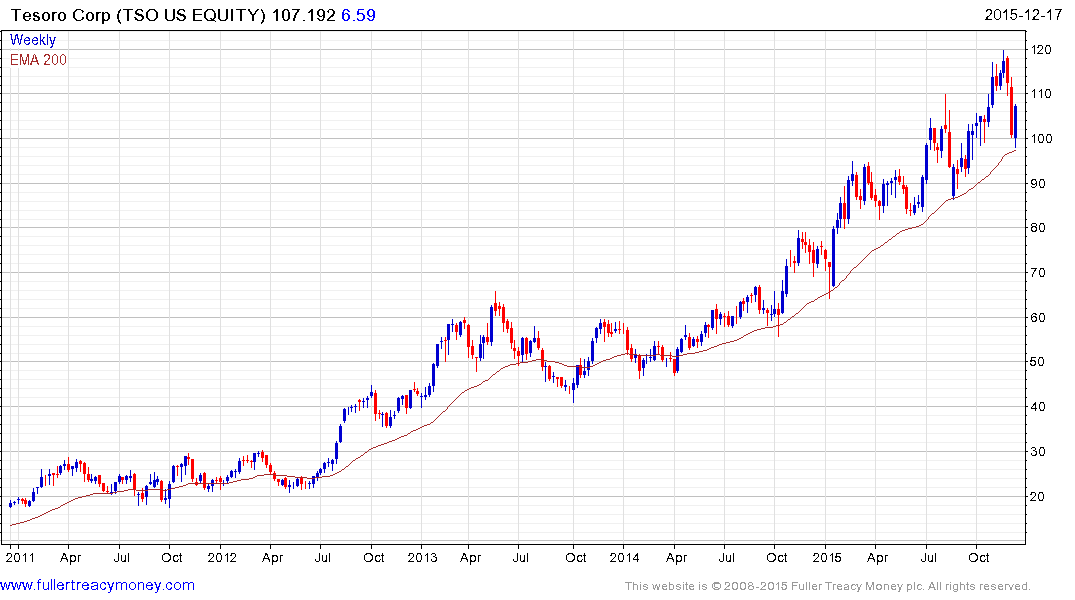 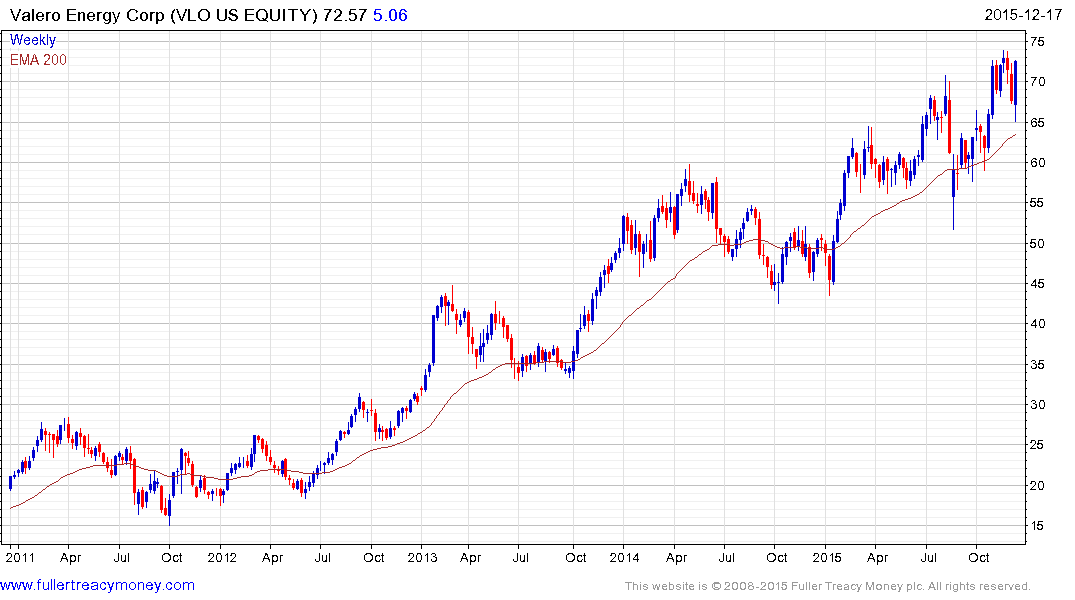 Refiners on the other hand remain in reasonably consistent uptrends with both Tesoro and Valero bouncing this week from the region of their respective 200-day MAs.