Seaborg's solution is to use another molten salt – sodium hydroxide – as a liquid moderator. Thus, the core design places the fuel salt tube inside a larger tube filled with sodium hydroxide, creating a first-of-its-kind all-liquid reactor that's remarkably compact. But sodium hydroxide itself is a powerfully caustic base, often used as oven cleaner or drain cleaner; the Seaborg design has to deal with this added corrosive agent too.

And on top of all that, there's the freaky phenomenon of "grain-boundary corrosion" to boot, caused by the presence of tellurium as a fission by-product in the fuel salt stream. Tellurium atoms can merrily penetrate through metals, and swap positions with other elements, leading to embrittlement of the metals at their weakest points.

The company is well aware of its key challenges here. "Seaborg’s core IP is based on corrosion control in the moderator salt, and applying the lessons learned since the 1950s," says Pettersen. "But it is not just a question of corrosion, it is also how easy it is to put these things together. Hands-on experience is important. They need to be welded, tested, inspected, maintained. We are working towards having perhaps 20 or 30 test loops in Copenhagen, with the experiments designed, set up and executed. The conceptual design is already done; we are now working on the basic design and in that way we are working up towards a full-scale prototype."

Here is a link to the presentation Seaborg’s CEO gave at the Singapore Week of Innovation & Technology earlier this year.

To my mind creating a nuclear energy solution that accepts that accidents do happen as the primary starting point is a significant development. The primary attraction of molten salt is it does not present a massive dispersion or bomb threat. After that everything else comes down to economies of scale.

Side stepping regulation by putting the reactors on ships is also a smart pivot and basically eliminates site preparation. Of course, there will still be a significant NIMBY argument against having an active reactor in the vicinity of a large city but this is certainly an innovative set of potential solutions.

Small modular nuclear reactors represent an undeniable solution to the question of how to produce base power and does not require the significant footprint of wind or solar. 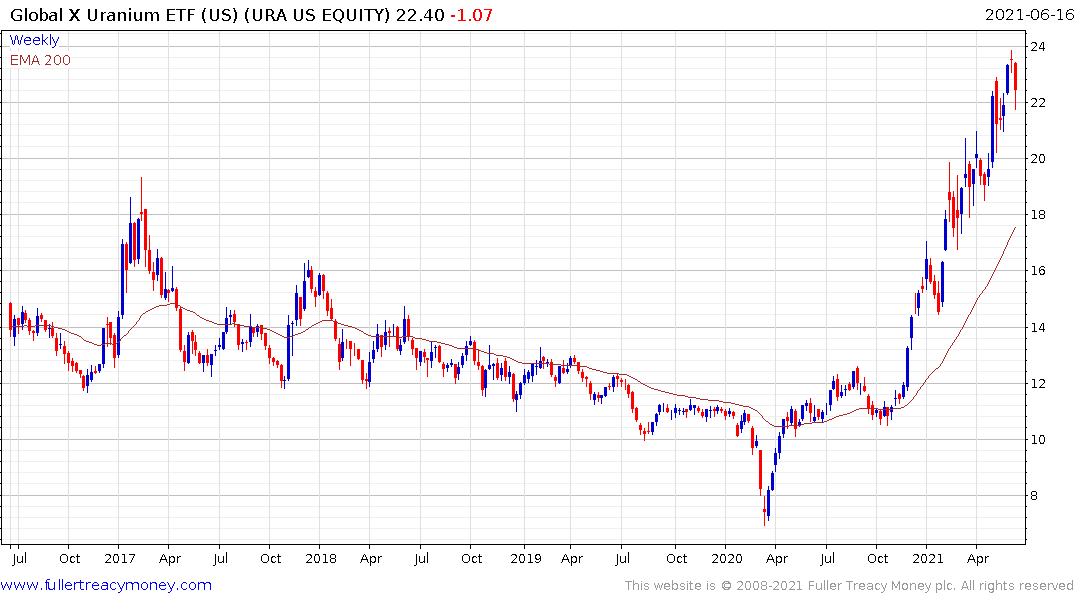 The uranium miners ETF continues to hold its sequence of higher reaction lows. With some pressure coming to bear on the commodities sector in the short-term, some volatility may be possible but a sustained move below the trend mean would be required to question medium-term recovery potential.

The longer-term outlook is for much greater demand for electricity. That suggests there is a place for nuclear in the future energy mix. If cheaper modular designs can get beyond the planning stage, it would represent a significant innovation that would reshape the entire renewables sector.