Saudis, Russia in Tentative Deal for Gradual Oil-Output Hike
Comment of the Day

“The last thing Saudi Arabia and the United Arab Emirates, even Russia, want is $85 a barrel, much less $100 a barrel,” Bob McNally, president of Rapidan Energy and a former White House official, told Bloomberg Television on Thursday. “So far in Washington, it’s been quiet. As we get closer to $80 a barrel, it’ll set off alarm bells” about the risk it poses to the economic recovery, he said.

The big question for investors is what price retards growth potential in the economy. That number is going to be different for every country. For the USA, as an exporter, the potential for higher oil prices will support parts of the economy and challenge others. That suggests there is a happy medium where unconventional supply is profitable but not too profitable. $70-$80 might be that balance point where everyone can tolerate prices.

For OPEC+ that level is also reasonable. There are obviously also some countries that require significantly higher prices to meet their internal obligations. but they also understand that higher prices destroy demand. For consumers like China, India, Europe and Japan any price is too much. That’s why they are so eager to champion alternatives and carbon credit trading. 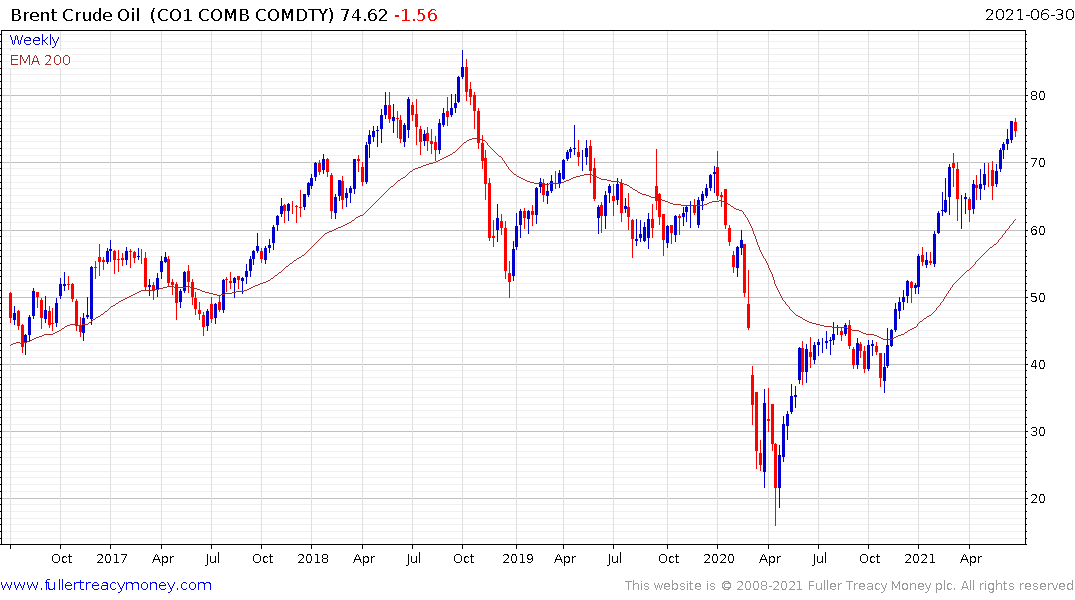 Brent Crude oil continues to pause around $75. However, it is important to highlight this is not a secular bull market. There is no shortage of oil. We have an artificial supply deficit and an uncertain demand recovery forecast. At current prices, shale drillers are profitable and have the potential to hedge at profitable rates for years into the future.

That suggests supply will increase regardless of what OPEC+ agrees. With that background, a sustained push back up into the $100 handle looks unlikely until new sources of demand overwhelm supply. The chemicals/materials sector is the best bet on that front but competing in construction materials and automotive bodies is still in its infancy.