Saudi Will Only Cut Oil Output if Others Do, EA's Sen Says
Comment of the Day

Saudi Will Only Cut Oil Output if Others Do, EA's Sen Says by Eoin Treacy

“It’s very clear that Saudi Arabia is maintaining its position - it will cut only if everyone else cuts,” Energy Aspect’s Amrita Sen says in a Bloomberg TV interview.

There could be a deal later in the year, but it’s too early as it is unclear how low demand will go; “There’s a lot of hope and expectation rather than anything concrete”

Market will correct through market mechanisms; Energy Aspects believes world will run out of storage in May, producers will then have no choice but to shut production, but prices will remain low

It’s unlikely that the U.S. would ever join Russia and Saudi Arabia in coordinated cuts

“How do you get the U.S. to join something that it would call a cartel?”; there are thousands of producers in the U.S., so it would be impossible for the country to cut

The shock from the coronavirus lock down is still rippling through the energy markets but that is not why Saudi Arabia chose now to launch a price war with Russia. They are much more concerned with the fact oil demand growth is slowing down, if not contracting, on a secular basis. That presents singular problems for countries who entire existence is predicated on oil exports. 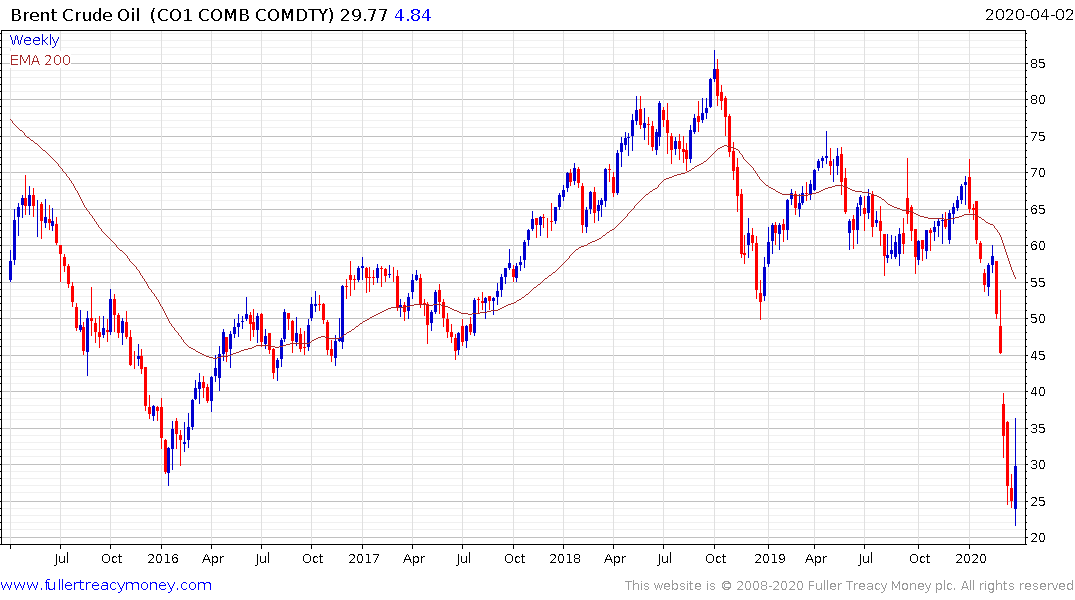 The growth of supply from Russia, the USA, Canada and Brazil is a challenge to OPECs dominance of the market. However, the increasing reliance of OPEC members on high prices, to balance domestic budgets, is also eating away at its ability to compete on price alone.

The one thing the price war has clearly signalled is Russia and Saudi Arabia are no longer willing to subsidise US and Canada supply. We have seen what a free market environment means for the oil sector and prices have collapsed. A survival of the fittest would shut in supply for anywhere with production prices north of $50. However, the challenge for the USA and Canada is their oil sectors are privately owned whereas most other countries are capable of making national decisions about production quotas.

Despite these challenges the oil price rallied to break its sequence of lower rally highs today to confirm a low of at least near-term significance. 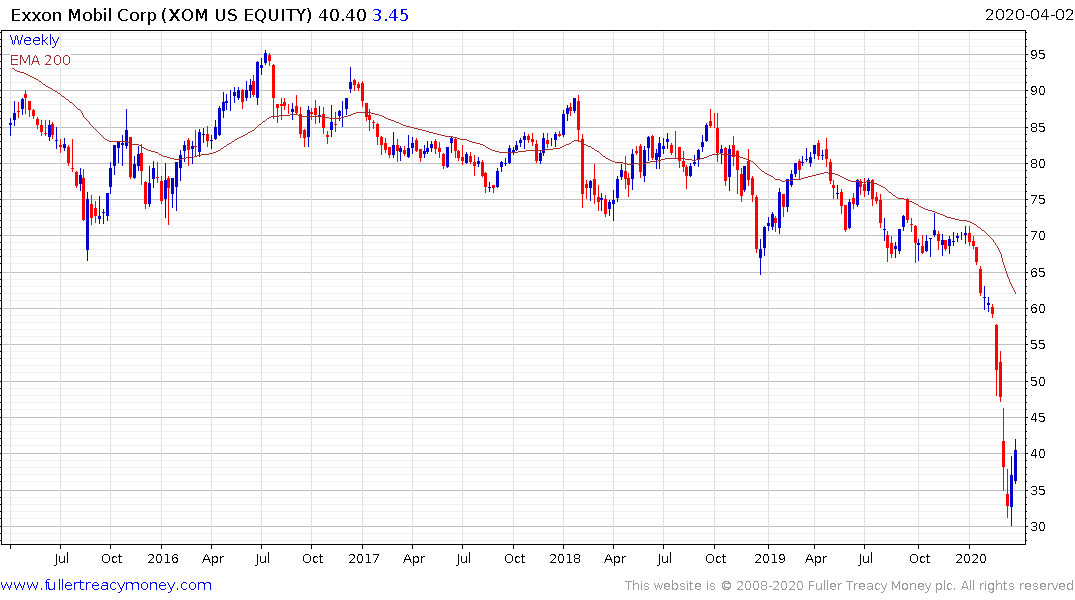 Exxon Mobil yielded a high of 11% two weeks ago and that has now contracted to 8.79%. The company has never cut its dividend and has a low debt/equity ratio. While the natural gas price is still very low, the share has already priced in a lot of bad news. A reversionary rally is still underway. 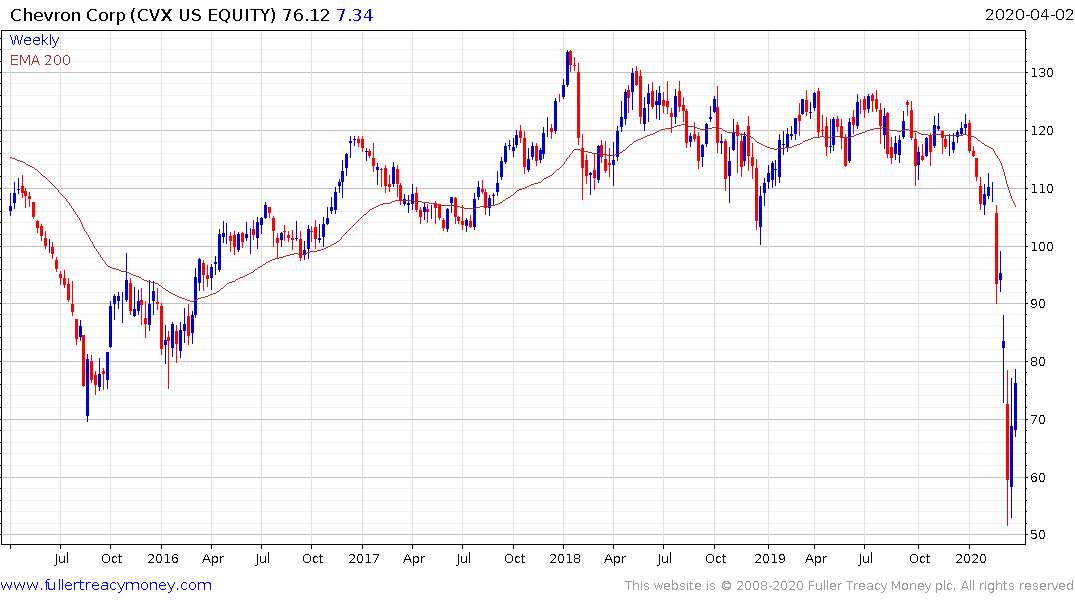 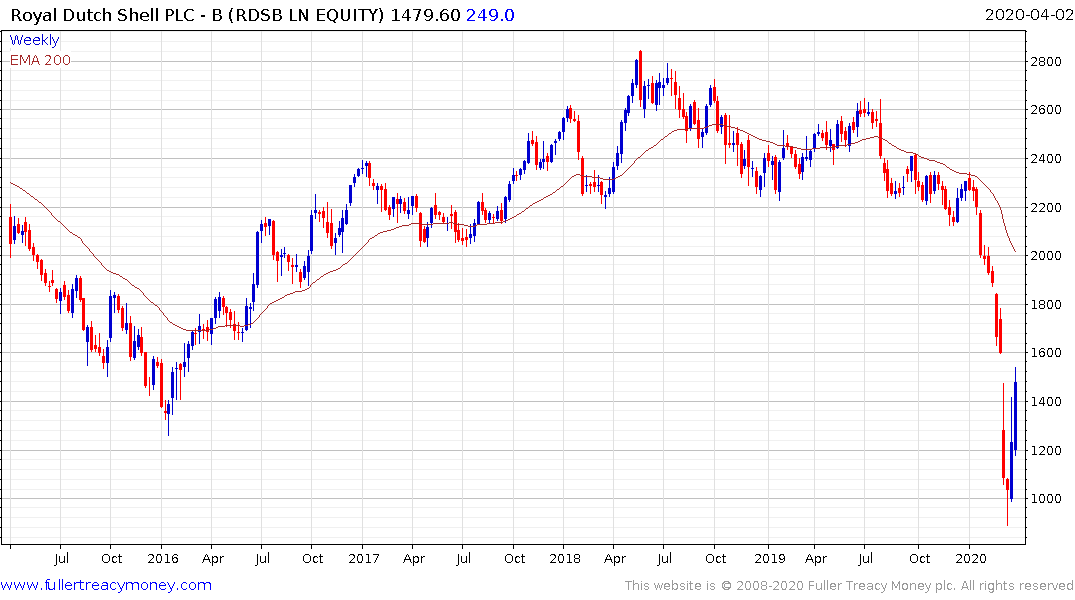 Royal Dutch Shell has a spottier history of dividend growth but the yield hit over 14% two weeks ago and is now 9.94%. The rebound has confirmed at least near-term support.

It remains the base case that oil prices are unlikely recover more meaningfully until some supply is withdrawn from the market and the high yield portion of the domestic onshore US and Canadian market remain the highest probability default candidates.