Russia's central bank aggressively raised its interest rate for the sixth time in a row Friday in an
effort to slow soaring food prices, and did not rule out further hikes.

Rising prices, falling incomes and a lack of tangible government support during the pandemic have been eroding popular support for President Vladimir Putin's two-decade rule, and authorities are under pressure to ease inflation.

At a meeting on Friday, the Bank of Russia increased its key rate by 0.75 percentage points to 7.50 percent, surprising many analysts who had expected a smaller hike.

The bank said that more hikes could follow and revised up inflation predictions.

"Inflation is developing substantially above the Bank of Russia's forecast and is expected to be within the range of 7.4-7.9 percent at the end of 2021," the bank said.

The Bank of Russia said that as of October 18, inflation stood at 7.8 percent but was expected to return to 4.0-4.5 percent next year.

"The central bank continues to act decisively and proactively," Dmitry Polevoy, head of investment at Locko Invest, said in a note to clients.

After months of historically low inflation, consumer prices began to climb in March 2020, driven by a drop in the ruble's value in the middle of the coronavirus pandemic.

The central bank started raising its historically low rate the same month. Its next rate review meeting is scheduled for December 17. In September, the bank raised its interest rate by 0.25 percentage points to 6.75 percent.

Russia is a major grain producer but is also reliant on imports for many additional food stuffs. That offers a graphic representation of how everyone is susceptible to the fragility of the global supply chain. Shutting the whole world down eighteen months ago had a dire effect on the ability of producers to manage their operations. The ensuing volatility has taken much longer than anyone thought to iron out and it is not over yet. 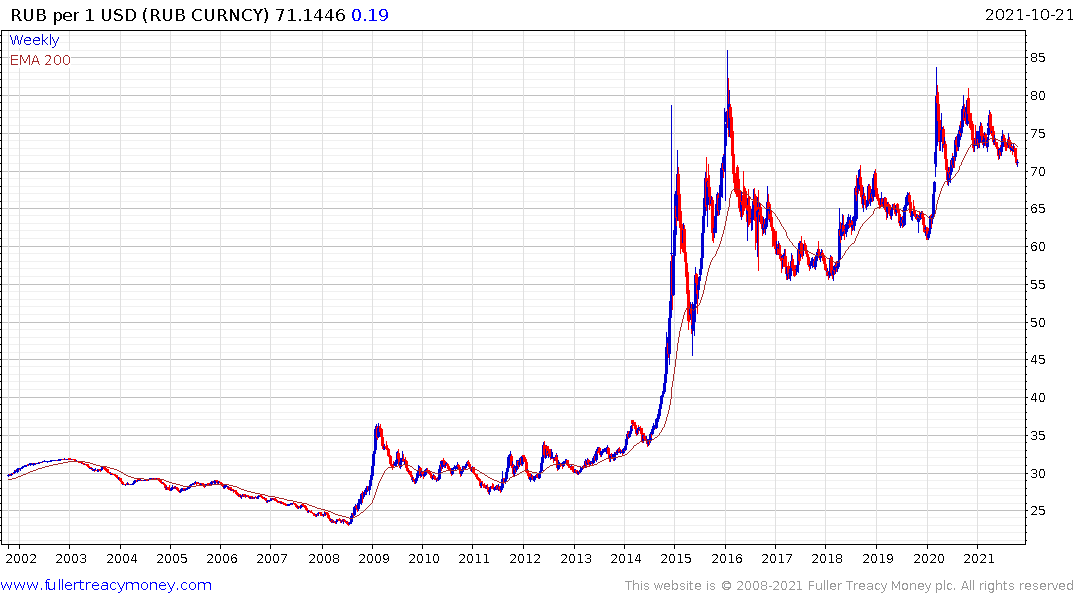 The Ruble popped on the upside following the news of additional rate hikes. The RUB 70 level was an area of support between 2015 and 2020 so it is now a potential area of resistance amid a short-term overbought condition. How well oil trades from current levels will likely be a deciding factor in whether the move is extended.

Russia’s ruble denominated debt is trading around the domestic interest rate but the US Dollar debt is trading at yields that are close to half those rates. That suggests international investors are willing to accept a significantly lower return to avoid currency risk. 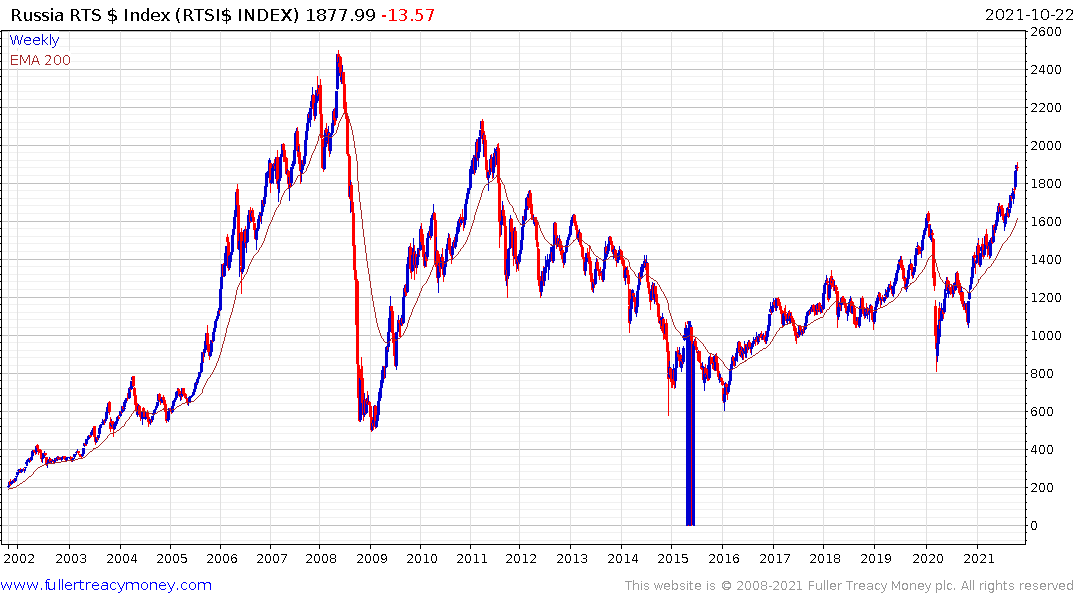 The Dollar denominated RTS is closing in on the 2011 peak near 2000 amid a short-term overbought condition. 2011 marked the peak of the post GFC commodity rebound so it is a big psychological barrier for the market to overcome. It is reasonable to expect some consolidation in the not-too-distant future.