Last week in Vienna, ministers from Russia, Saudi Arabia and other members of the group left a fractious meeting with no deal to continue the cuts beyond April 1. Saudi Arabia heavily discounted its oil over the weekend, triggering a plunge of more than 20% in international crude futures.

Rosneft’s London-listed shares dropped 19.5% on Monday, while markets in Moscow were closed for a public holiday. In a separate statement, Russia’s finance ministry said that the country’s oil-wealth reserves would be sufficient to cover lost revenue “for six to 10 years” at oil prices of $25 to $30 a barrel.

Unconventional oil and gas has been one of the biggest gamechangers for the global economy in history. When the world’s biggest consumer, where production peaked decades ago morphs into the world’s biggest producer and a net exporter it changes the fundamentals and interrelationships of the market.

OPEC has been the predominant stabilising force in the oil market for decades. That has been possible because demand growth was predictable both from existing customers like the USA and evolving customers in emerging markets like China. On the supply the dominance of OPEC and Russia as major producers allowed for an uneasy status quo. The advent of unconventional oil and gas simultaneously removed a source of demand and created a supply competitor which had previously been considering impossible.

Unconventional supply is a good example of the rising cost of marginal production. It tends to be prolific but more expensive and the sector is highly fragmented. The advent of a Saudi/Russia price war, which had its starting volley over the weekend, is going to put some of the most highly leveraged companies out of business.

High Yield Energy Spreads hit 1000 basis points on Friday and rose to 1150 today. The spread was closer to 1600 points at the nadir in 2016 and the current situation is likely to be more challenging for the sector. It will also accelerate consolidation of the US energy sector. 2 years ago, there was $2 trillion in private equity dry powder sitting on the sideline waiting for an opportunity like what is being presented today. 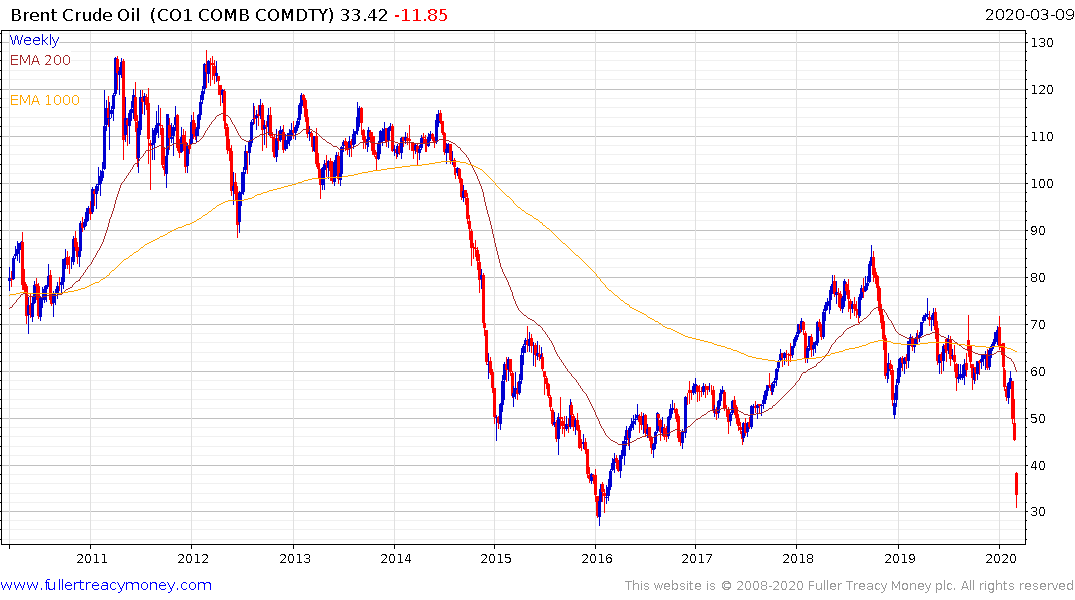 Meanwhile crude oil is likely to remain under pressure for the foreseeable future. It is worth highlighting however that some of the lowest cost producers of gas like Cabot Oil & Gas were clear relative strength leaders today. 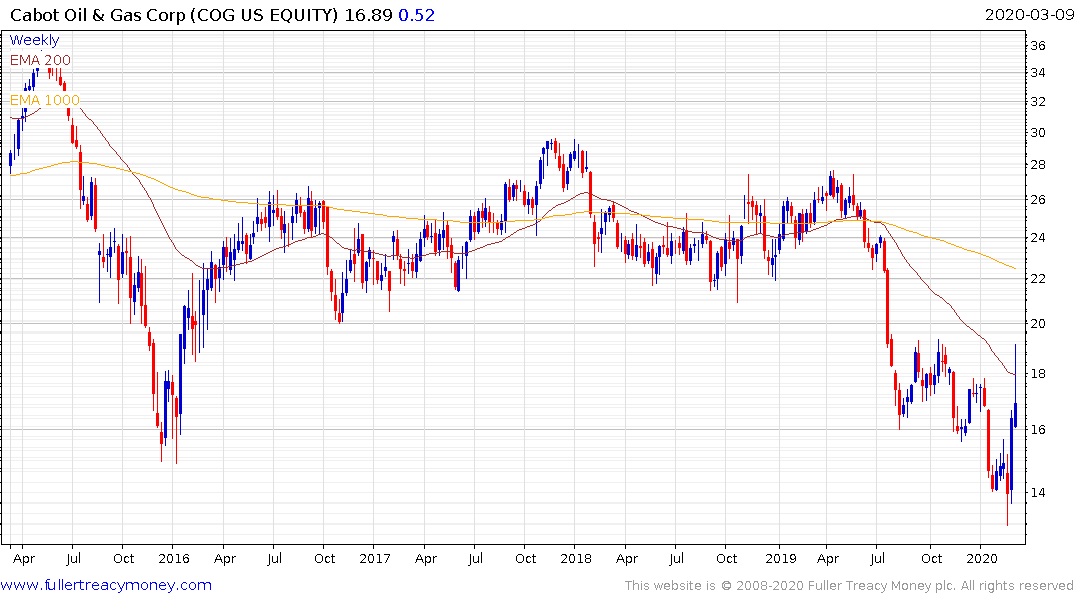 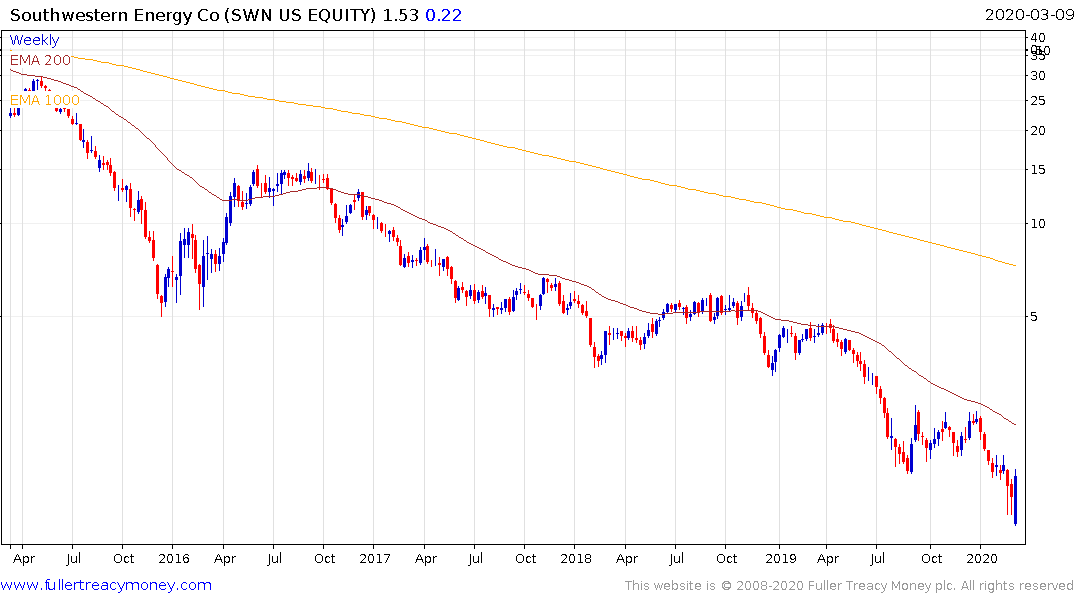 The halving of oil prices since January will contribute to the stimulative efforts being implemented by central banks and governments all over the world. While it represents a headwind for producers it is a significant bonus for consumers. 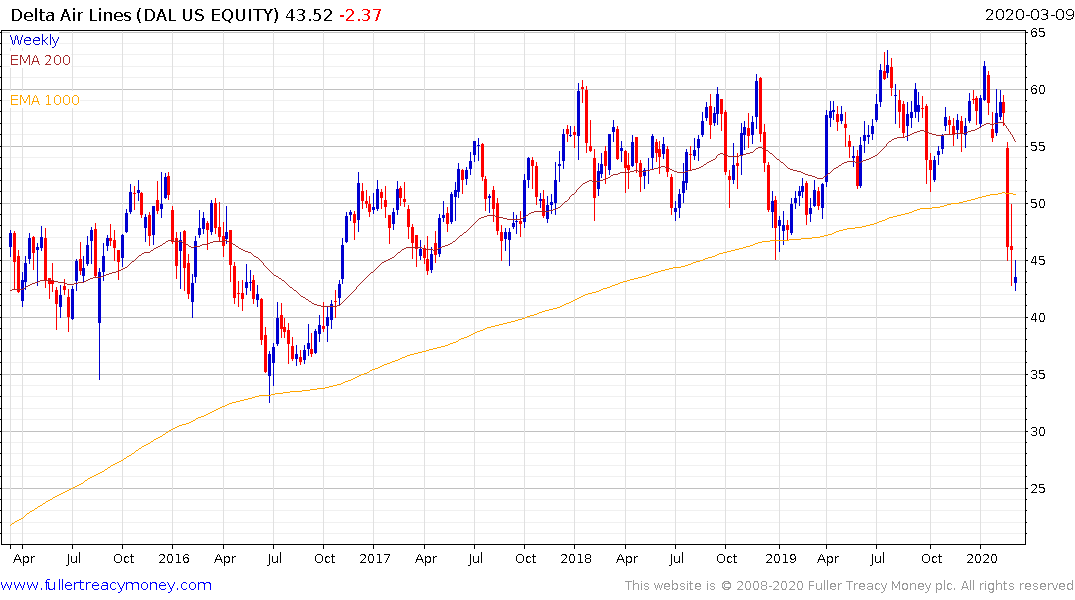 Airlines have been selling off aggressively because of the coronavirus scare and the infection rate has not yet peaked in major markets like Europe and North America. Nevertheless, airlines are being presented with the opportunity to hedge oil price out to November 2021 at levels below $45.