Review of the FTSE 350 by Eoin Treacy

The ECB’s massive QE program will put pressure on the BoE to delay any plans it may have had to raise short term interest rates. Along with its own easy monetary policy, the prospect of recovering demand on mainland Europe should be a positive for the UK’s economy and it may also be subject to additional capital flows since not all the money created by the ECB will stay inside the Eurozone. 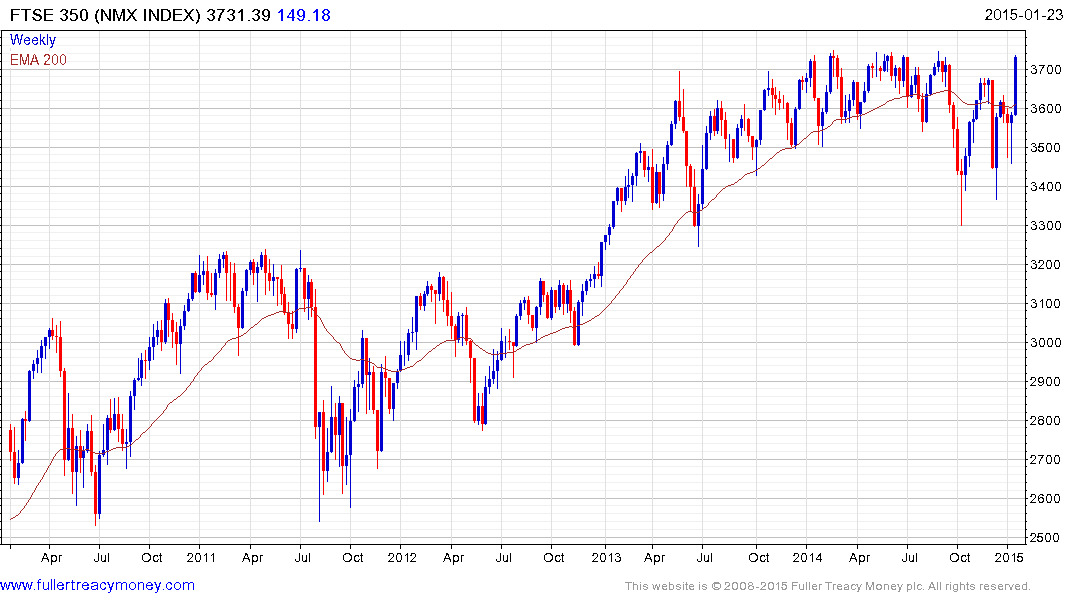 I thought it might be an opportune time to look at the FTSE 350 since its constituents may be among the beneficiaries of ECB largesse. The Index has surged over the last two weeks to retest its peak and a while some consolidation is possible in the current area a sustained move below 3500 would be required to question medium-term scope for additional upside.

I clicked through the constituents of the FTSE 350 this morning and also created a section for the FTSE All Share REIT Index in the Chart Library. Here is a link to an Excel sheet of the FTSE350’s constituents ranked by sector then by market cap. 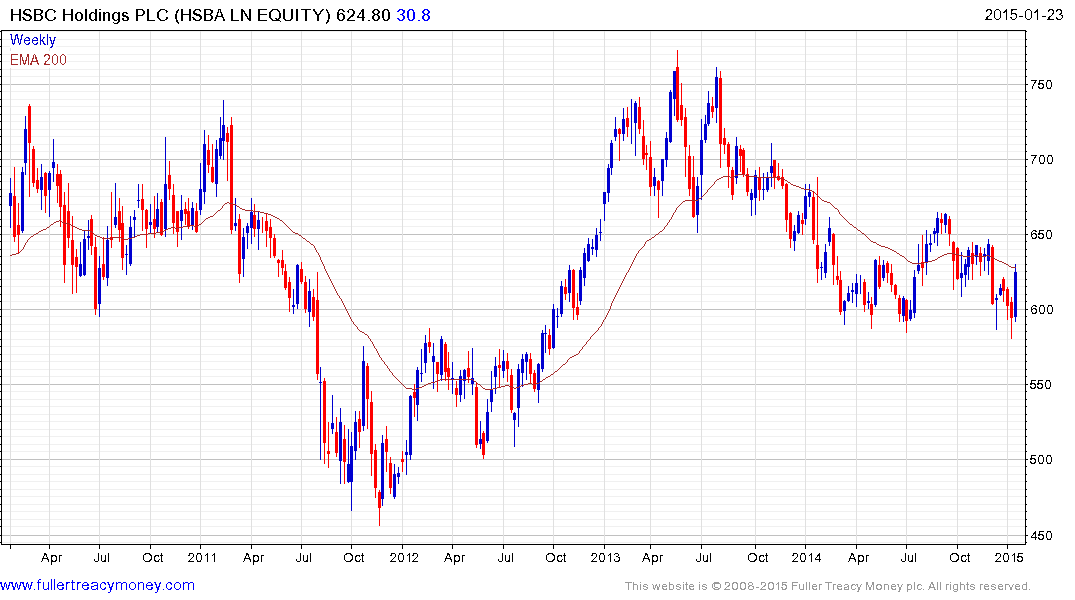 In the banking sector HSBC (Est P/E 10.65, DY 5.27%) has firmed in the region of 600p. It is now testing the 200-day MA and a sustained move below 600p would be required to question potential for additional upside. 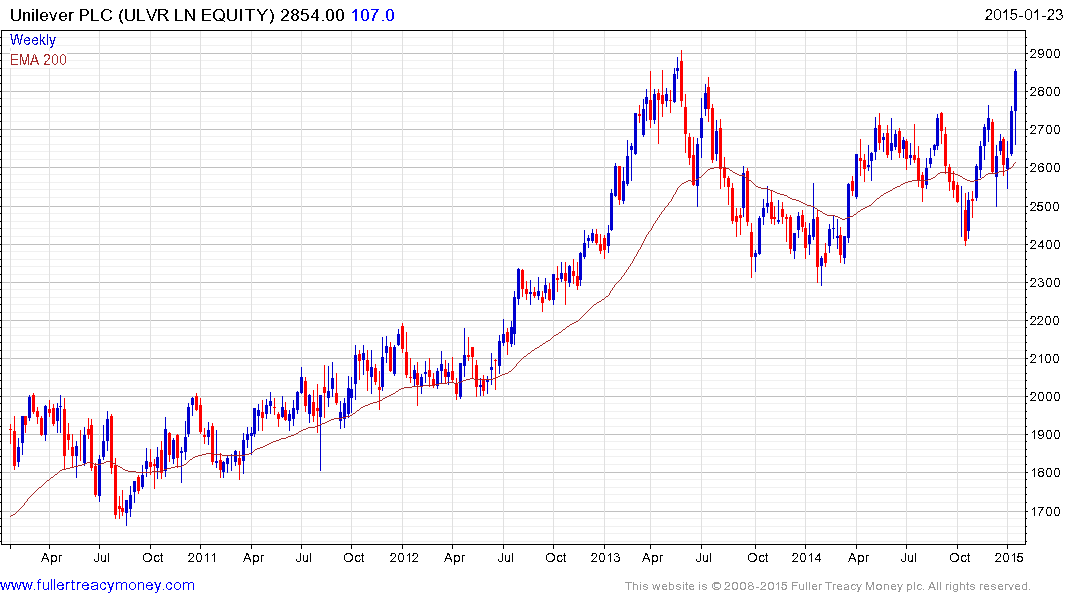 In the consumer staples sector Unilever (Est P/E 21.84, DY 3.51%) has been ranging for nearly two years and rallied impressively over the last two weeks to retest its peak. Some consolidation may occur in this region but a sustained move back below the 200-day MA would be required to question medium-term upside potential. 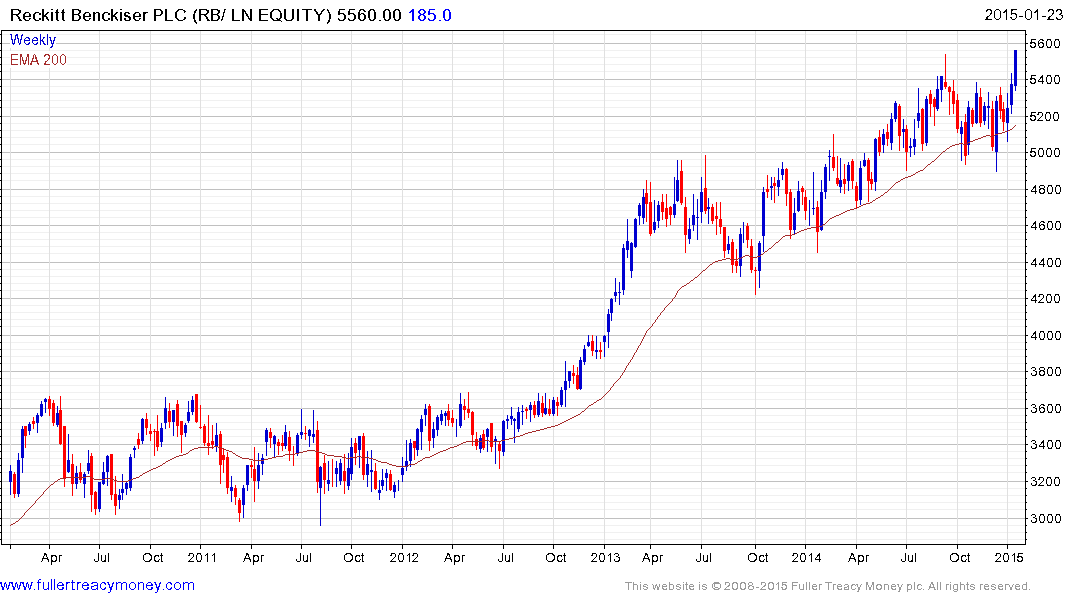 Reckitt Benckiser (Est P/E 22.35, DY 2.74%) broke out to new all-time highs this week and a sustained move below the 5000p area would be required to question the consistency of the medium-term uptrend. 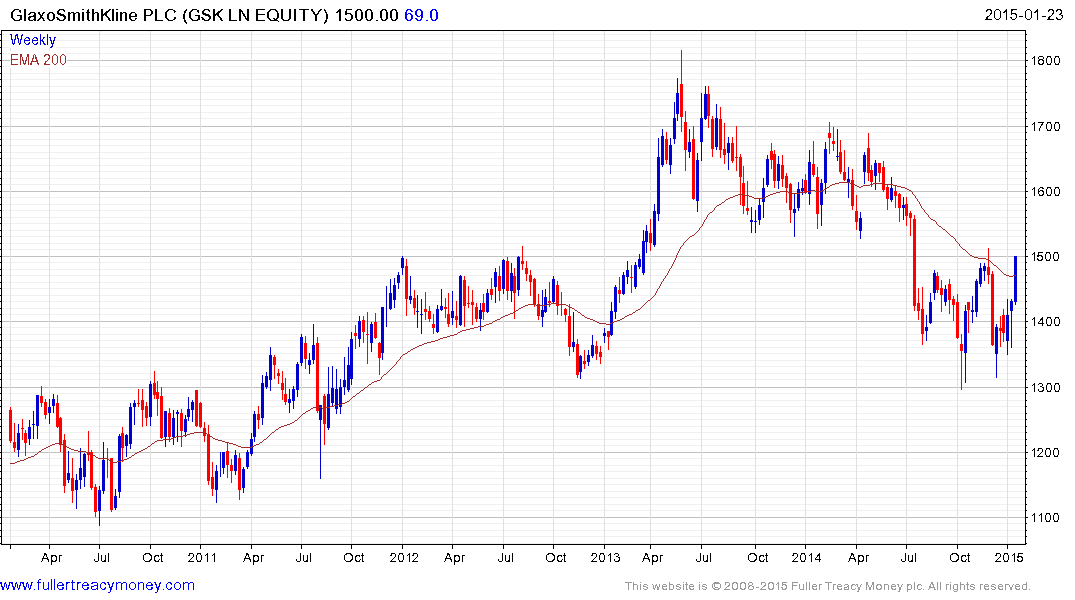 In pharmaceuticals sector GlaxoSmithKline (Est P/E 16.04, DY 5.93%) experienced a sharp decline following its issues with sales techniques in China. The share has stabilised above 1300p and a sustained move below that level would be required to question medium-term potential for additional upside. 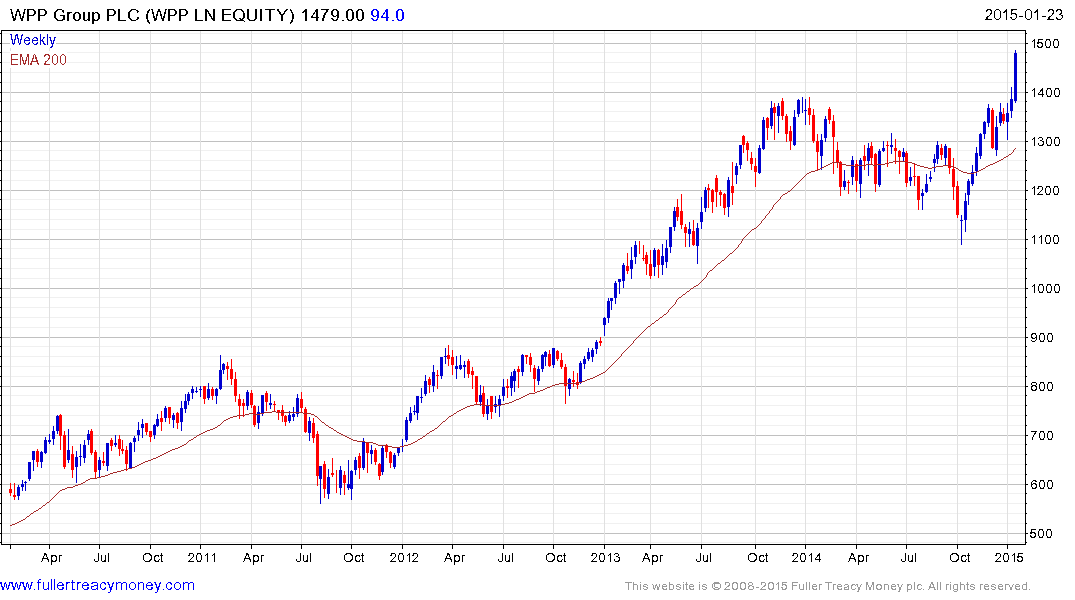 In the advertising sector WPP (Est P/E 17.84, DY 2.38%) broke emphatically up out of an 18-month range this week to reassert the medium-term uptrend. 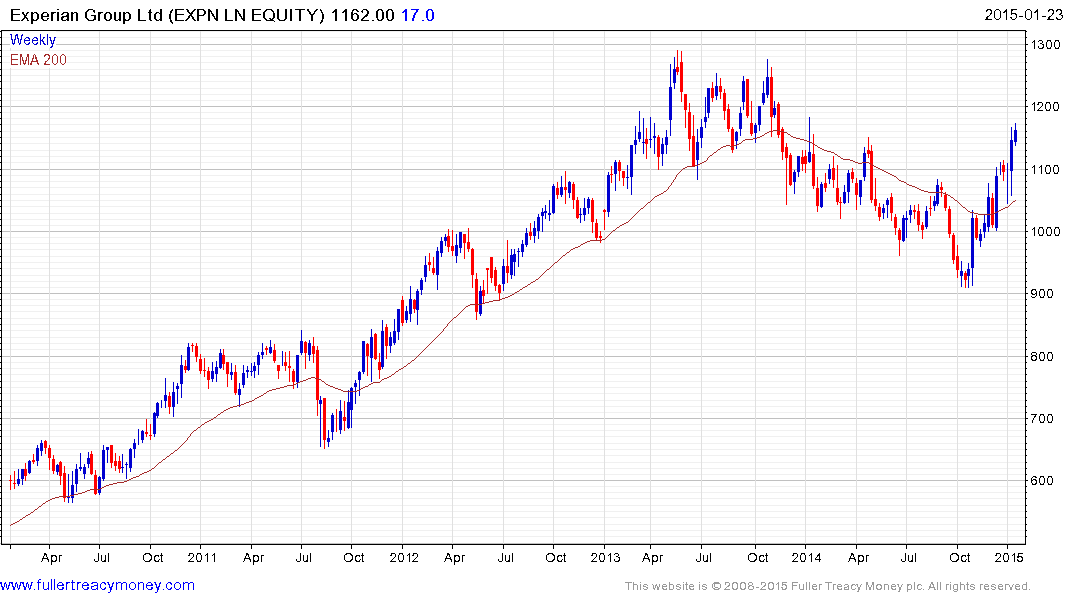 In financial services sector Experian (Est P/E 18.43, DY 2%) has broken an 18-month progression of lower rally highs and a sustained move below the 200-day MA would be required to question medium-term scope for additional upside. 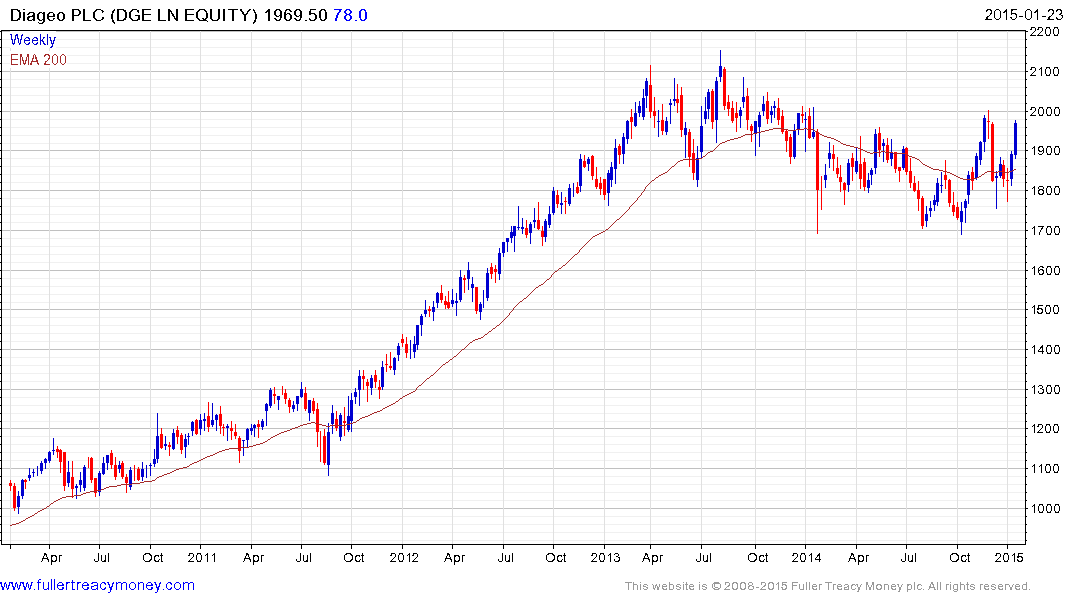 In the alcoholic beverages sector Diageo (Est P/E 20.62, DY 2.92%) found support above the October low in December and has broken a yearlong progression of lower rally highs. 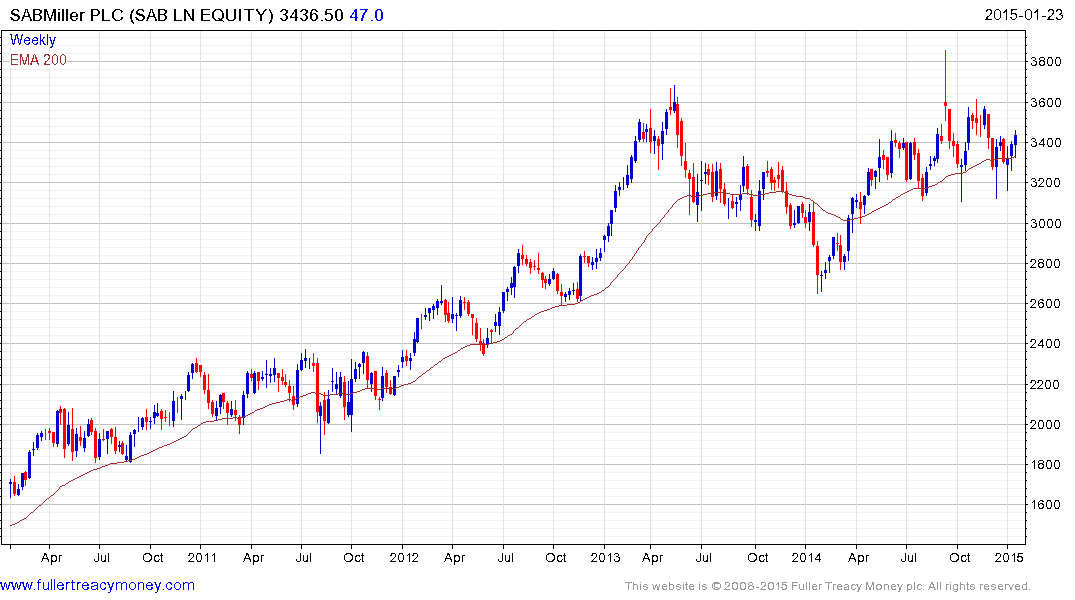 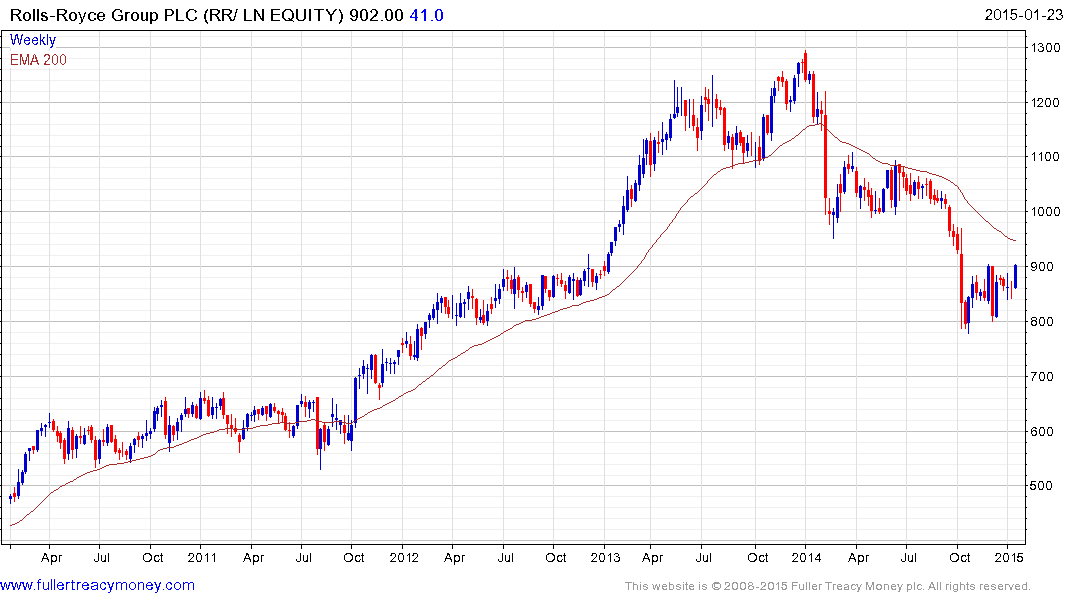 In the aircraft parts sector Rolls Royce (Est P/E 14.18, DY 2%) has been through a difficult period but found at least short-term support in the region of 800p and is currently closing the overextension relative to the 200-day MA. 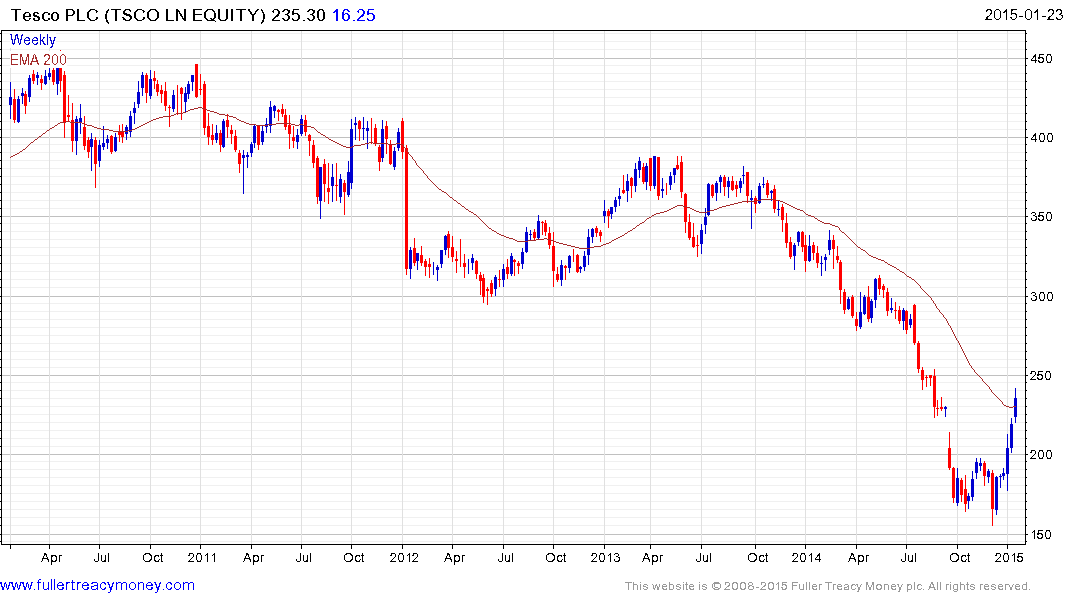 Tesco (Est P/E 21.59, DY 0.55%) is in the process of a major reorganisation and is also benefitting from bargain hunting in the food retail sector more generally. Sainsbury and Morrisons are also bouncing from deeply oversold levels. Tesco found support in December near 150p and has now unwound its oversold condition relative to the trend mean. Some consolidation is increasingly likely but a sustained move below 200p would be required to question recovery potential.

The resources sector has been persona non grata for two years as commodity prices declined but valuations have improved and there are tentative signs support is being found. However, a bullish catalyst in the form of firmer commodity prices will probably be required to reignite investor interest beyond short-term steadying. 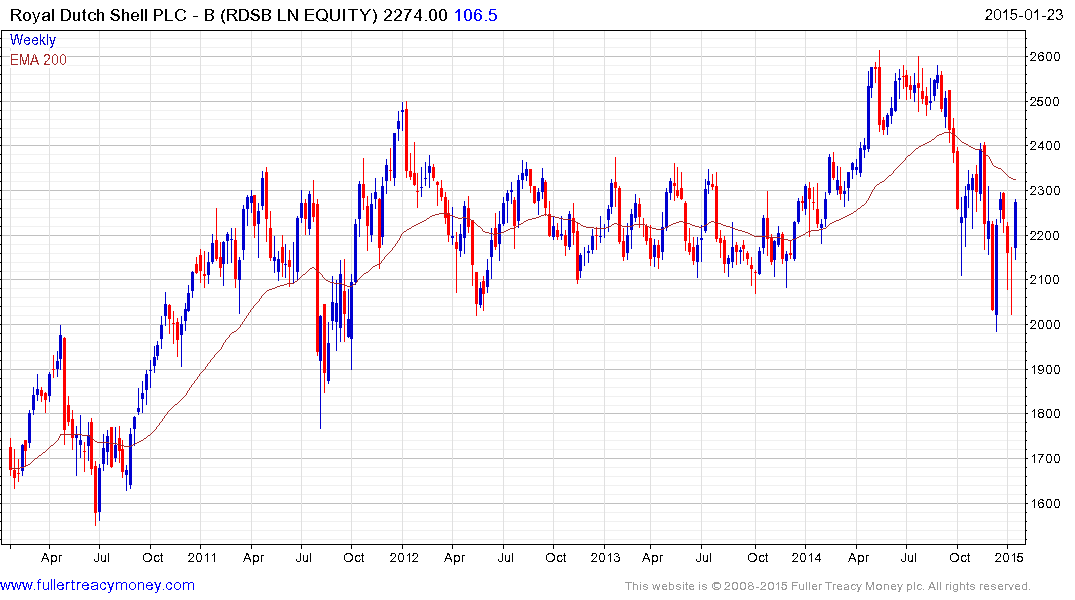 Royal Dutch Shell (Est P/E 9.44, DY 5.02%) produces more gas that oil and as such has been reasonably insulated from falling oil prices. The share continues to firm from the 2200p area. 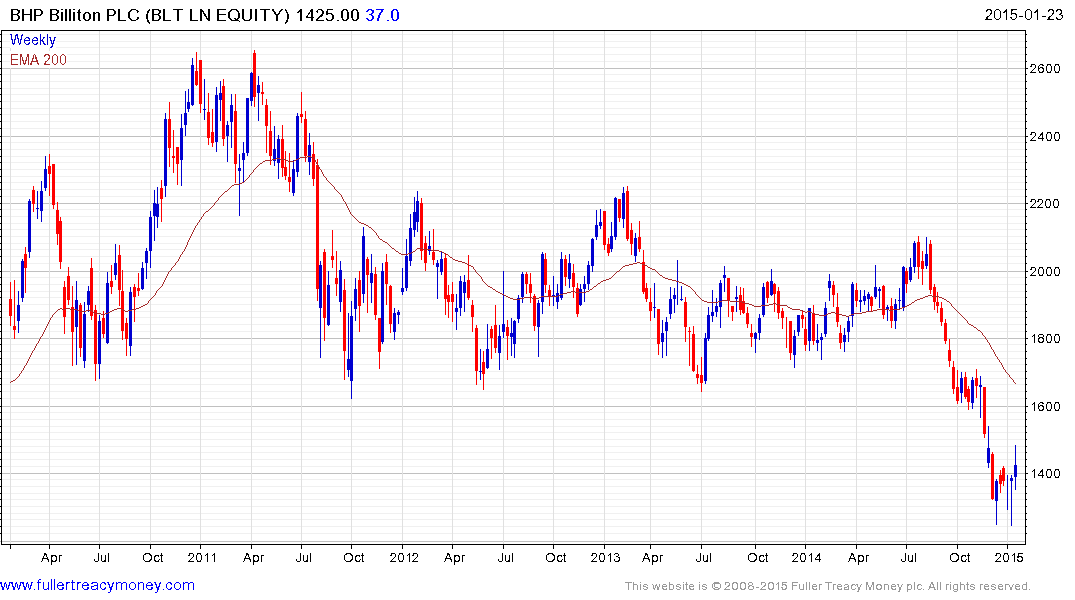 BHP Billiton (Est P/E 12.78, DY 5.69%) has at least steadied near 1250p but will need to find support above that level during the current pull back to demonstrate demand is returning at progressively higher levels. 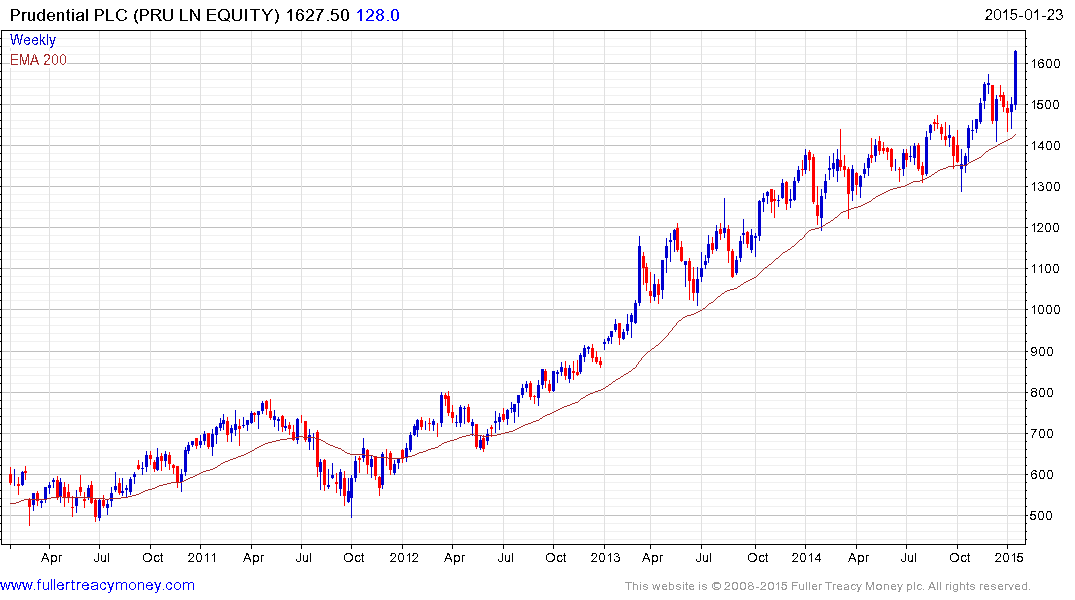 The outperformance of the insurance sector is a theme common to both the UK and Eurozone. In the UK the sector is supported by reasonable valuations and attractive dividends. Prudential (Est P/E 16.85, DY 2.39%) an Autonomy has one of the more consistent chart patterns. 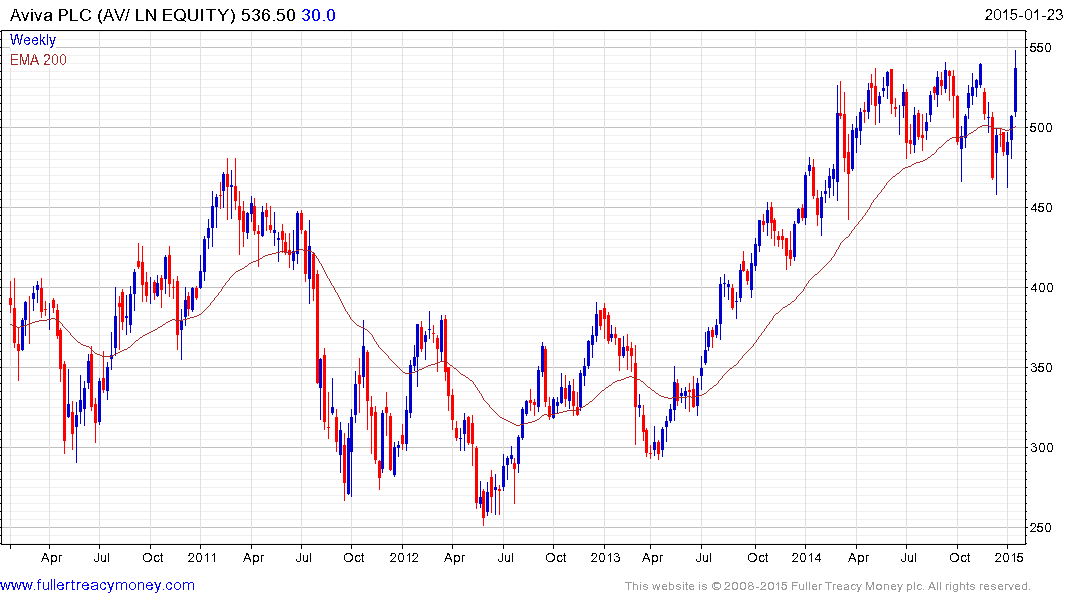 Aviva (Est P/E 11.27, DY 3.75%) has been ranging in the region of 500p for the last year and moved to a new recovery high this week. Some consolidation in this area is possible but a sustained move below 500p would be required to question medium-term potential for additional upside. 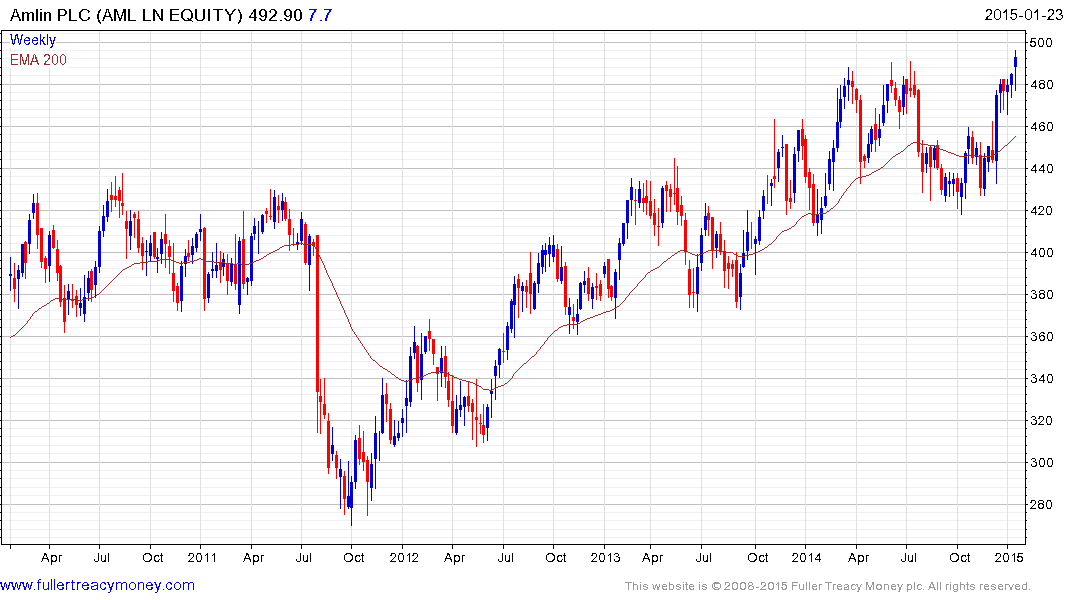 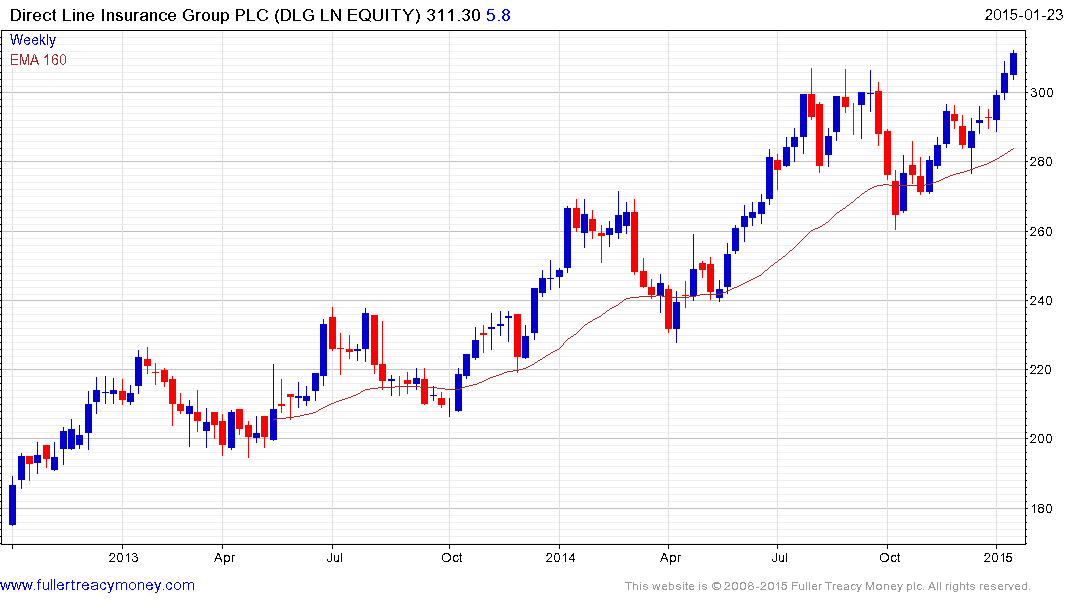 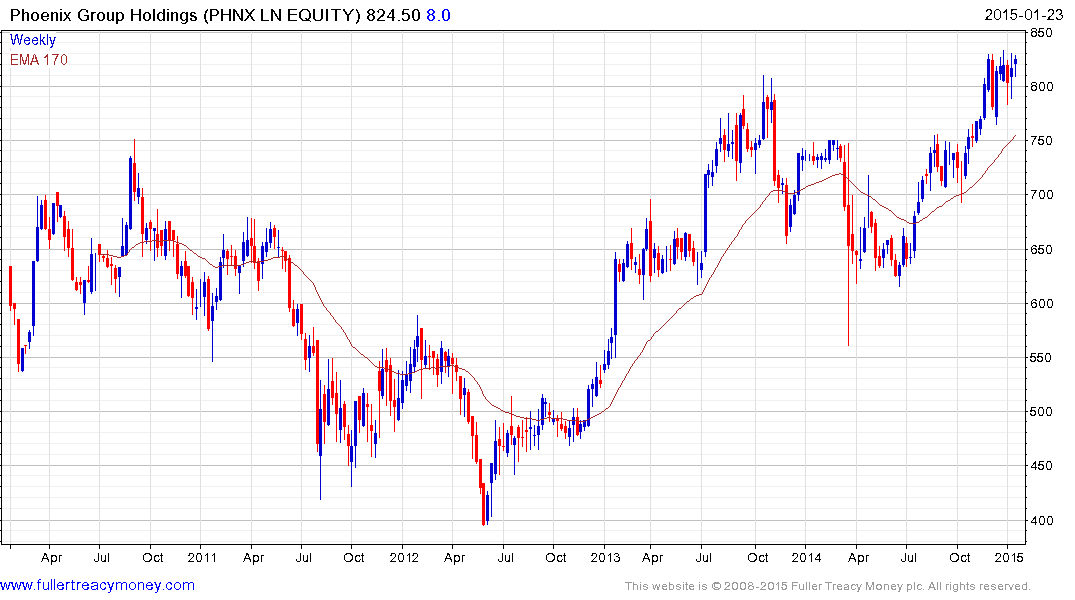 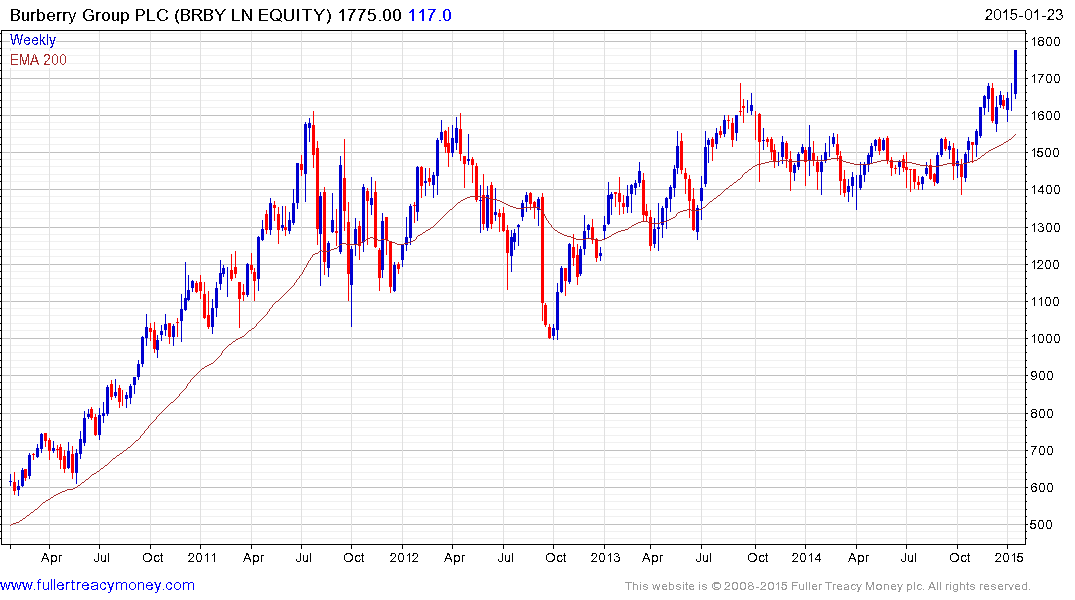 In the luxury goods sector Burberry  (Est P/E 23.26, DY 2.06%) has spent over 3 years ranging but broke out this week and a sustained move below 1600p would be required to question medium-term upside potential. 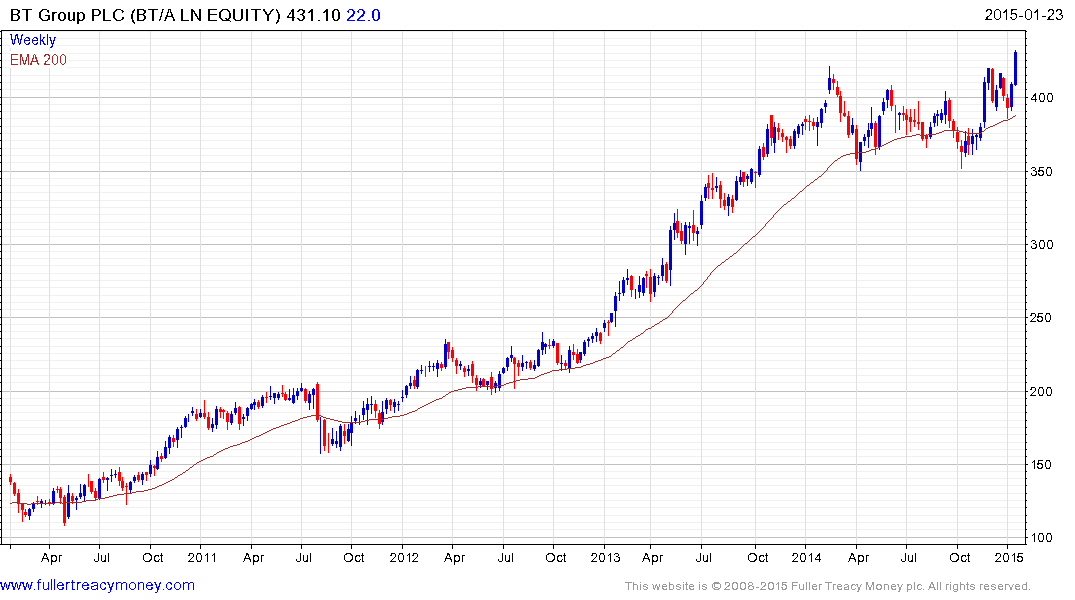 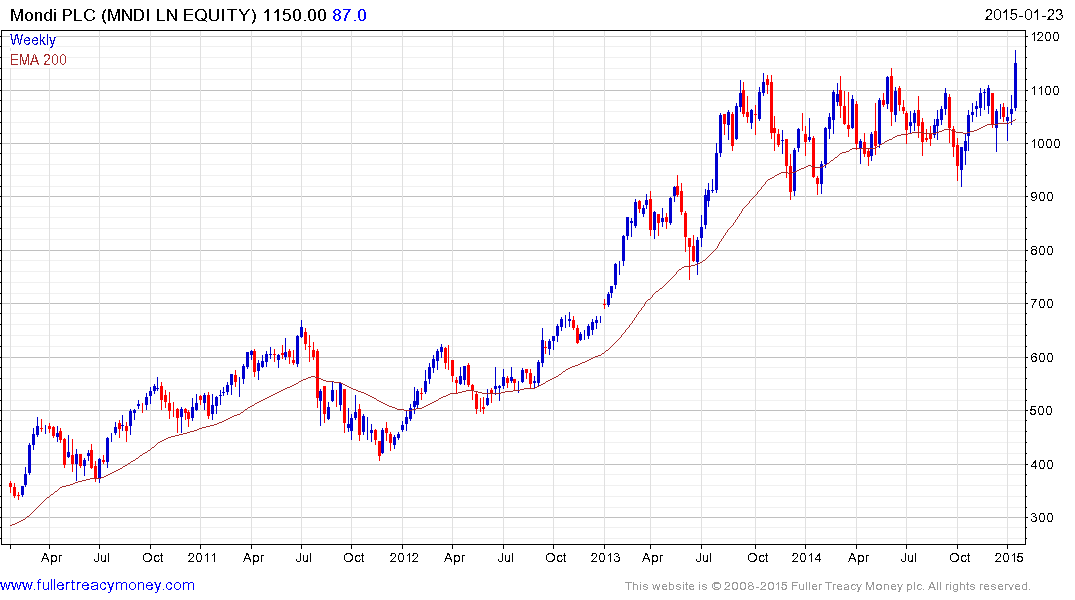 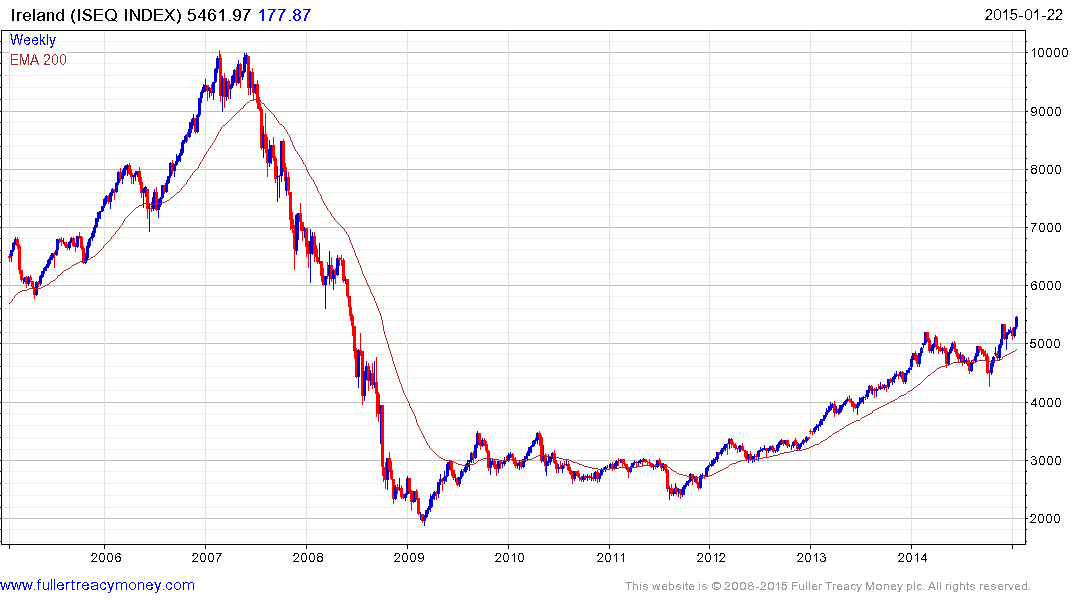 The Irish market has been among the region’s better performers over the last three years and its recent return to form following a difficult 2014 is being reflected in the performance of major Irish companies with UK listings. 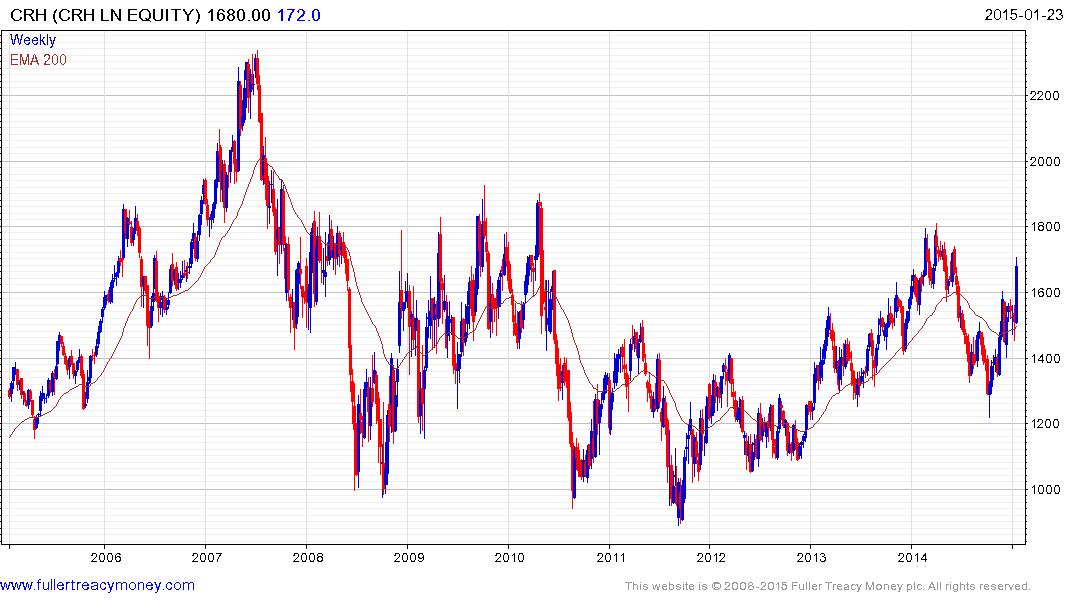 In the cement sector CRH (Est P/E 29.36, DY 3.03%) is rallying back towards the upper side of what remains a volatile six-year range. 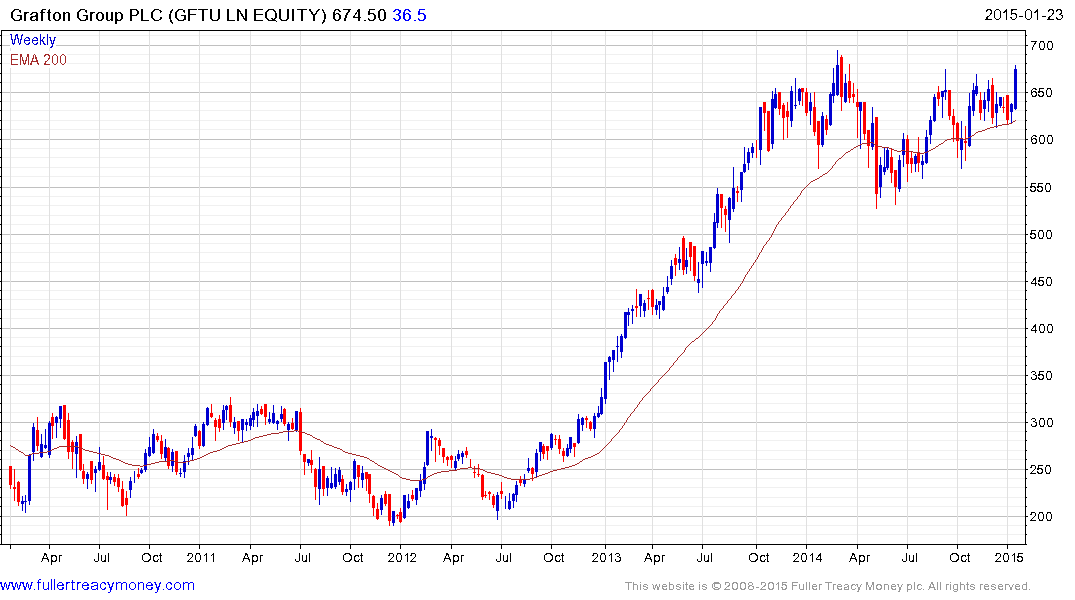 Elsewhere in the building materials sector Grafton Group (Est P/E 20.95, DY 1.37%) has rallied back up to test the region of its 2014 peak and a clear downward dynamic would be required to question potential for additional upside. 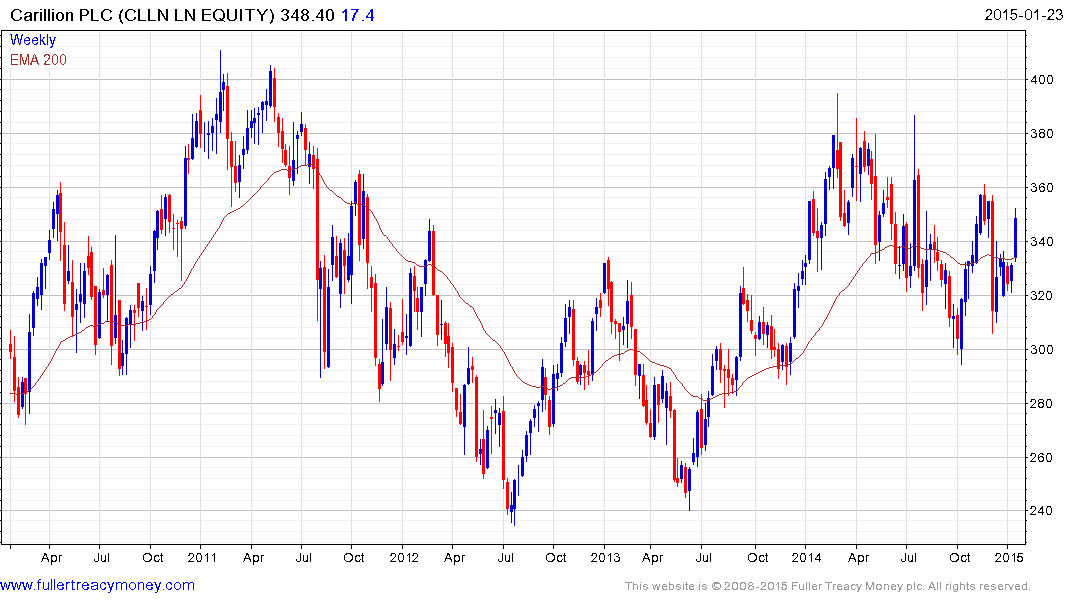 Carillion (Est P/E 10.43, DY 5.61%) is not an Irish company but is in the same sector and its valuations are more attractive. It posted its first higher reaction low in more than a year in December. 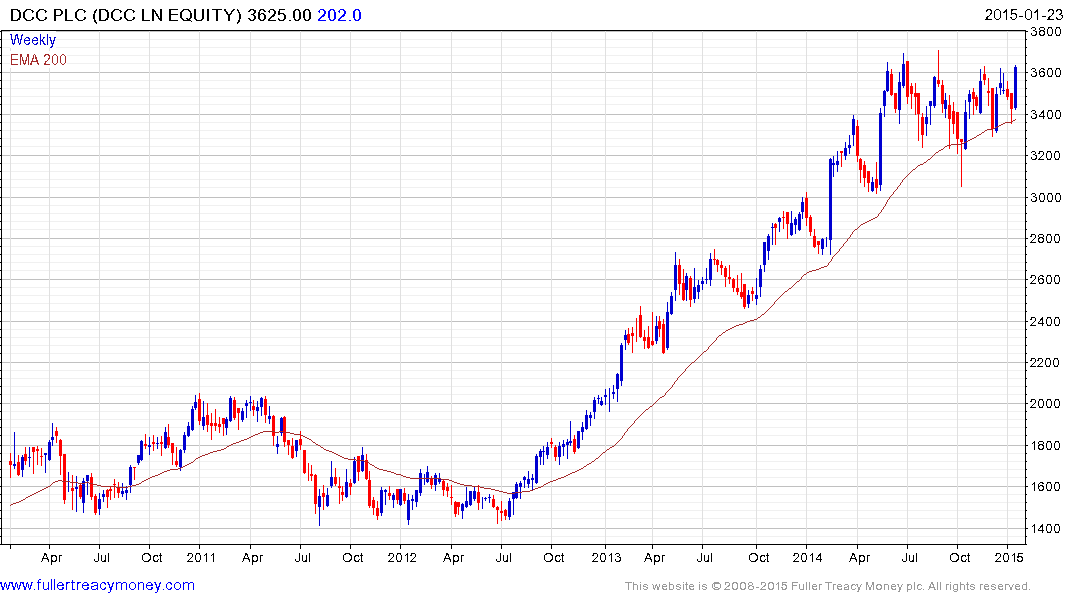 In the oil refining sector DCC (Est P/E 17.61, DY 2.19%) continues to find support in the region of the 200-day MA on pullbacks and has rallied to test the region of its highs. A sustained move below 3375p would be required to question medium-term scope for additional upside.

As can be seen from the above shares, the announcement of QE by the ECB has acted as bullish catalyst to reignite investor interest in a number of shares that had been ranging. This remains a liquidity fuelled bull market and there is little prospect of the liquidity being withdrawn anytime soon.

The UK REITs sector is also outperforming and I will review it separately on Monday.