“Trade policy uncertainty seems to be playing a role in the global slowdown and in weak manufacturing and capital spending in the United States,” Powell said in the text of his remarks Friday to central bankers gathered at the Kansas City Fed’s annual symposium in Jackson Hole, Wyoming. “We will act as appropriate to sustain the expansion, with a strong labor market and inflation near its symmetric 2% objective.”

It is looking like the learning curve for a newly installed Fed chair is about 18 months. Today’s measured statement from Jerome Powell did an excellent job of placating investor fears while leaving open the optionality of how much to cut by. The Fed has made clear they will cut rates if they need to but will not hurry. However, the simultaneous announcement by China that they are increasing tariffs on $75 billion of US goods is likely to be prove the catalyst for deeper cuts. 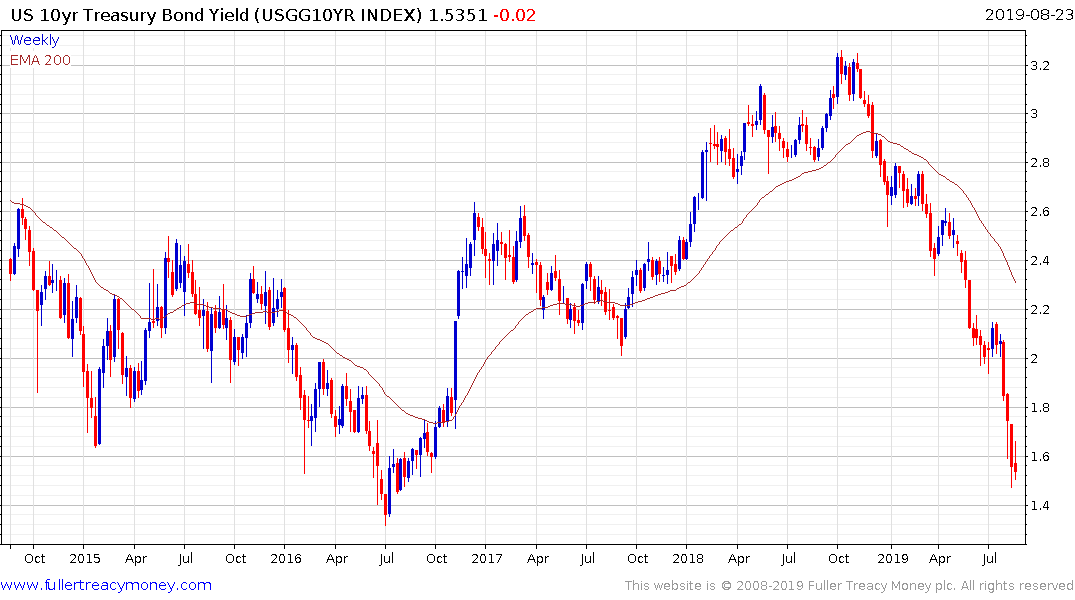 10-year Treasury yields compressed by the close, reversing an earlier advance, following the intensification of the trade war. The market is now more eager to price in a 50-basis point cut in September and this brings the deflation question into sharper focus. 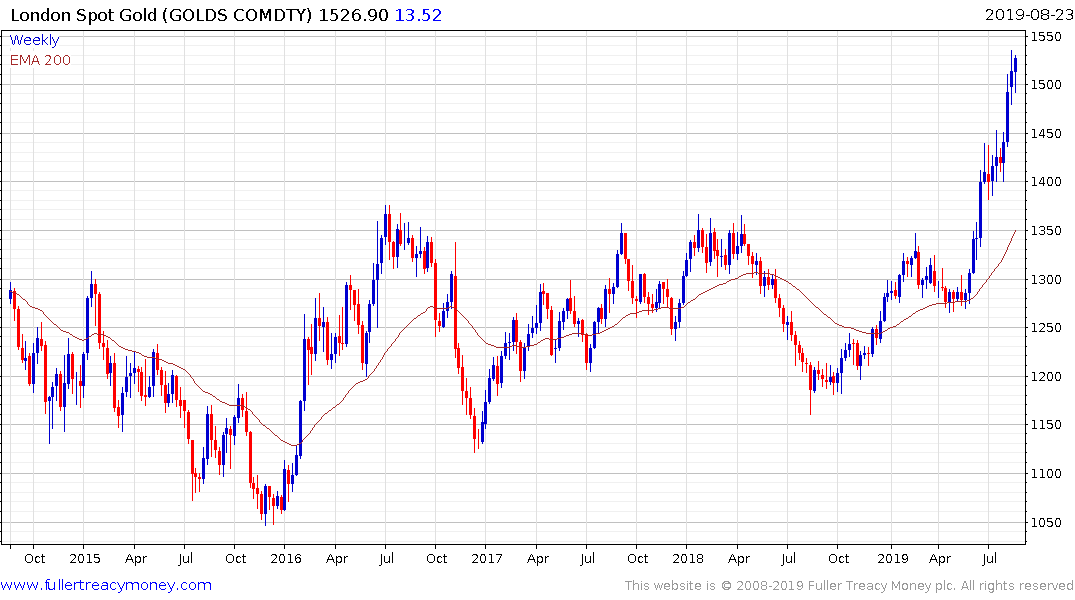 Gold rallied impressively from the $1500 level to test the upper side of its range and a clear downward dynamic will be required to question near-term scope for continued upsides. 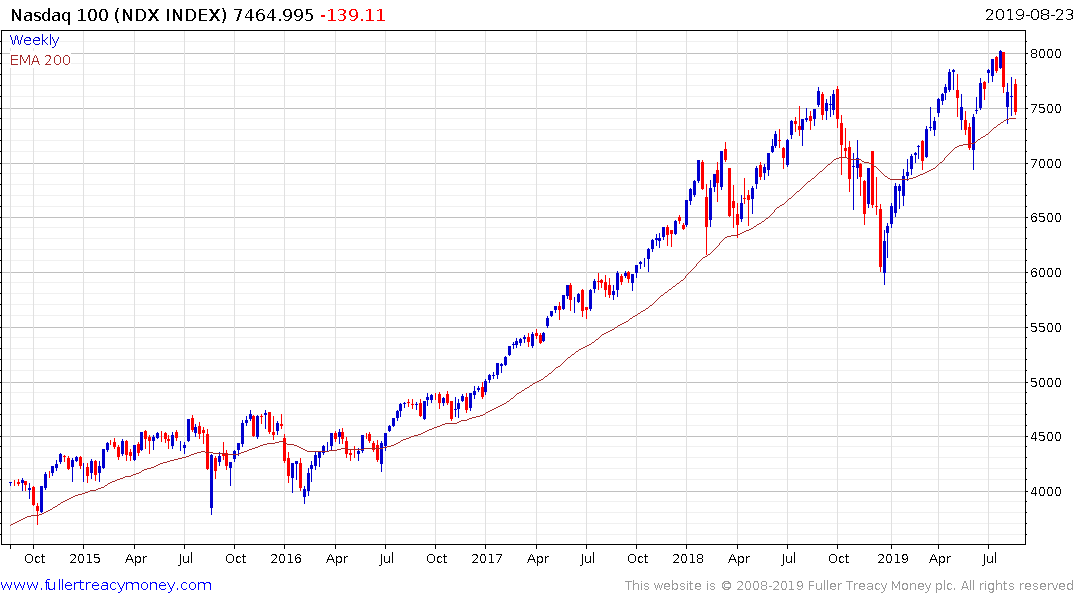 The Nasdaq-100 pulled back sharply, reversing an earlier gain on the Powell statement.  It is still trading above the trend mean but a clear upward dynamic is going to be required to signal a return to demand dominance.

Just how exceptional is the US economy is the big question for investors. The retail sector is still firm, unemployment is still contained and the housing market is likely to benefit from lower interest rates. Is this enough to counterbalance the drag of slower global growth and higher import price prices. 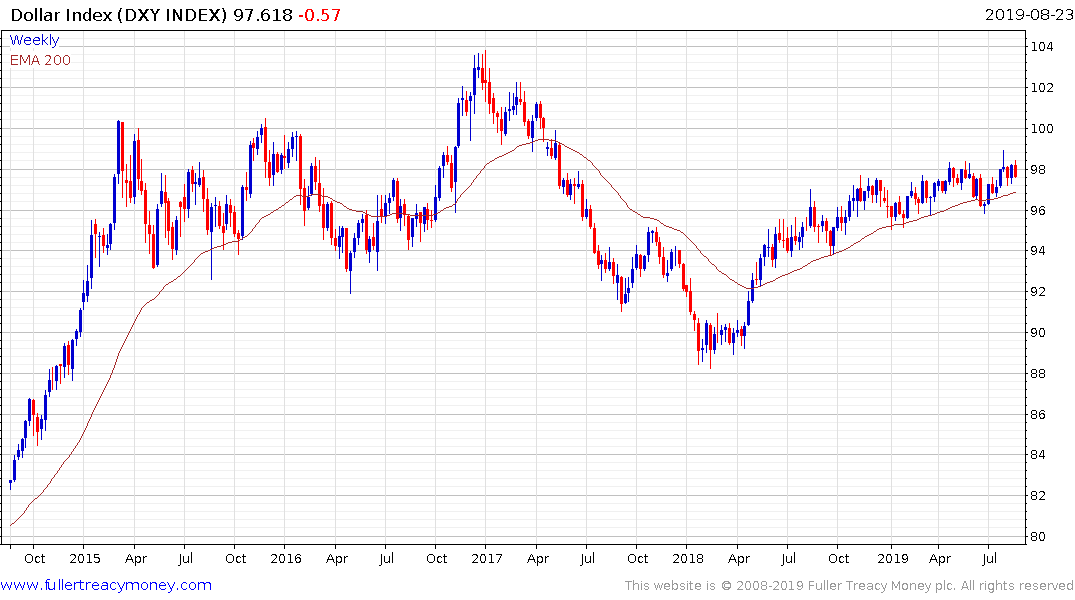 The Dollar weakened today suggesting some reluctance to continue to bid it up against a growing risk of outsized monetary easing. A sustained move below the trend mean would signal a return to supply dominance beyond the short term. The big question for the bond market is what happens to US inflation if the Dollar starts to trend downwards rather than upwards. 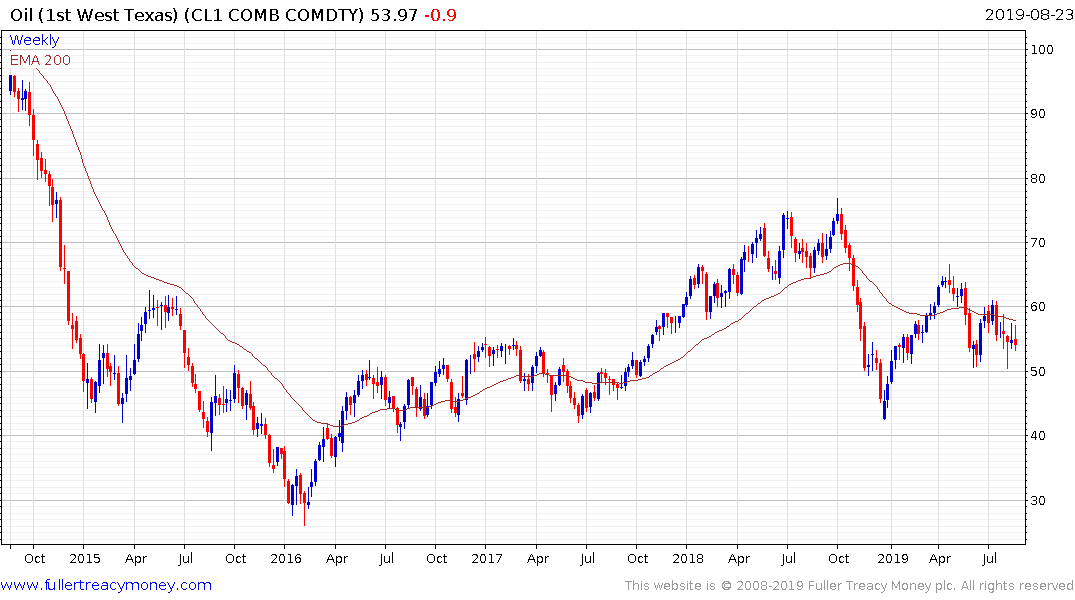 West Texas Intermediate Crude Oil confirmed near-term resistance in the region of the trend mean this week and remains on a downward trajectory. That’s good for consumers but not so much for producers. Since the USA is now a major constituent of both camps lower energy prices are likely to be a mixed blessing for the economy.

The portion of the corporate sector that depends most heavily on China for sales is likely to continue to be most heavily affected by the trade war. Meanwhile a race is on to source goods from anywhere other than China for US corporations. That represents a challenge in the short term but is a significant opportunity for India, Vietnam and Ethiopia.