Global LNG capacity will reach 468 million tons in 2018, from 295 million this year, according to Energy Aspects. That includes the expansion of output from Russia and excludes projects in East Africa and Cyprus that will probably be delayed into the next decade, said Trevor Sikorski, the consultant’s head of natural gas, coal and carbon.

There will be “enough room for everyone” in the LNG market and those with more competitive costs will benefit, Denis Solovev, a Novatek spokesman based in Moscow, said today by e-mail, citing earlier remarks by Mikhelson.

Putin pushed for the gas export law to increase the clout of Russia in global LNG markets. The nation is the world’s biggest gas exporter. It accounts for about 5 percent of LNG supply and 30 percent of pipeline deliveries, according to data
from BP Plc.

The creation of an increasingly large global LNG market necessitates not only that supply increases but that export terminals are built and that this valuable commodity is transported across long distances.

While the USA’s natural gas revolution has created bull markets in pipeline and rail shares, the global market represents an opportunity for tankers to transport LNG across oceans. While we can expect more ships to be built to service this market, at present there is a comparatively small number of pure plays.

Belgian listed Exmar has held a progression of higher reaction lows for more than a year as it completed a multi-year base formation. Provided it continues to hold this sequence, the benefit of the doubt can continue to be given to the upside
. 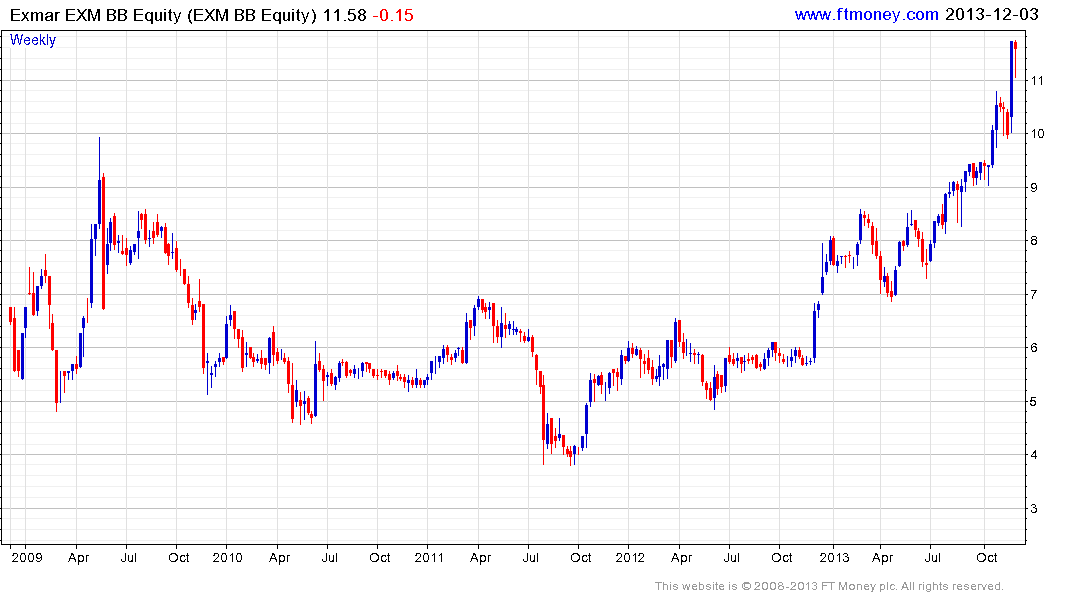 US listed Teekay LNG Partners has pulled back to test the progression of higher reaction lows within its overall range, where it will need to demonstrate a return to demand dominance if potential for continued higher to lateral ranging is to remain credible. Golar LNG has returned to test the lows near $36 within an overall range and bounced impressively this week.