Electric vehicles also involve energy intensive lithium-ion batteries. Few realize how much energy is embedded in an electric vehicle before it is ever plugged in. Over the life of a typical EV, nearly 40% of the total energy goes into manufacturing the battery. The IEA expects electric vehicles will represent nearly 15% of total transportation energy by 2040. We calculate this equates to approximately 850 mm EVs and nearly 65 terawatt hours of batteries. This is a staggering amount considering global lithium-ion manufacturing capacity is currently less than 0.4 terawatt hours per year. These batteries will require an incredible 2 billion tonnes of oil equivalent to build. We will shortly release a detailed podcast that goes into these figures in great depth.

Unfortunately, few people realize how energy intensive the “green transition” will be. As a result, much (if not all) of the carbon savings will be undone by generating the power in the first place. The IEA’s proposal assumes wind and solar make up nearly 50% of all electricity by 2040 and that some 850 mm electric vehicles will be on the road. These initiatives are expected to reduce CO2 by 55% or 18 bn tonnes per year. While this may sound impressive, simply moving away from coal towards much-cleaner natural gas would itself save nearly 14 bn tonnes of CO2 per year. When analyzed through this perspective, renewables would save an incremental 4 bn tonnes compared with the next cleanest option.

The views expressed in this report elaborates on many of the points made by other analysts. There is no getting around the fact that renewables are dependent on access to metals like copper, lithium, cobalt and nickel. That’s in addition to the significant additional quantities of rare earth metals required. These are all extractive industries. A lot of renewable infrastructure is also placed in very remote, ecologically pristine areas.

There is a clear risk that to transition to a “green” future, emissions will need to rise significantly before the goal can be achieved. Both systems will need to run in tandem for the foreseeable future.

The reason renewables have suddenly gained so much attention is because they are now economic with reliance on subsidies. The political climate is aiming to tax carbon, globally, and low interest rates make investing in incoming producing infrastructure a no-brainer. That means investment will continue to flow into the sector regardless of the carbon argument. Fewer local emissions and the feelgood sensation are enough of a hat-tip to the environment for most people.

Interest rates are much more of a threat to renewable energy than any type of carbon argument. Therefore, the best way to monitor the outlook for the wind and solar sectors would be via high yield spreads. Even with the significant decline in bond prices last week, the spread barely moved. Investors are not worried about refinancing risk as long as rates and low and the Fed is willing to backstop the market. 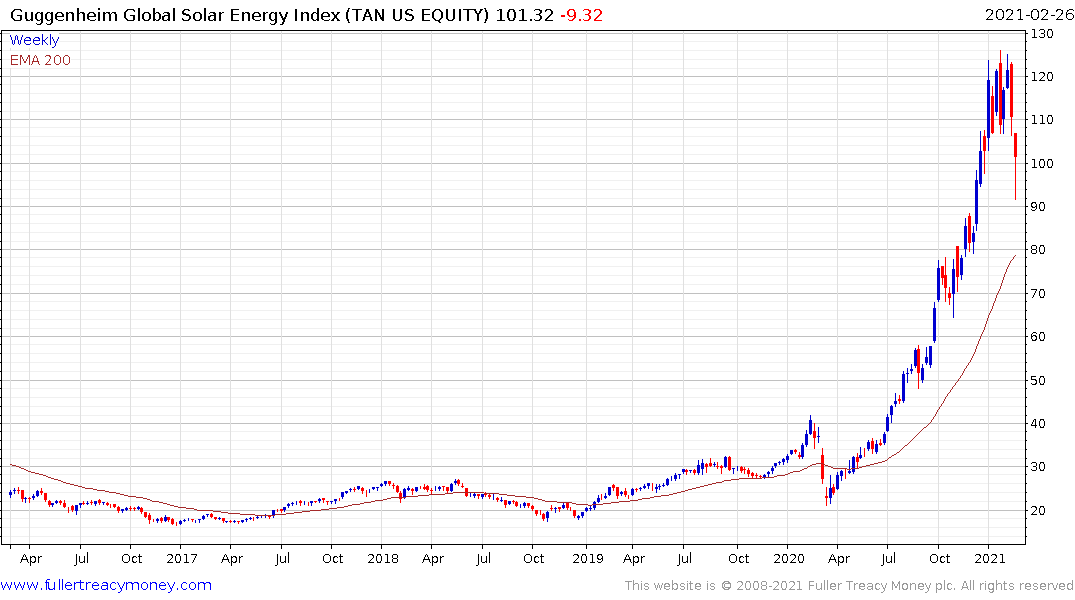 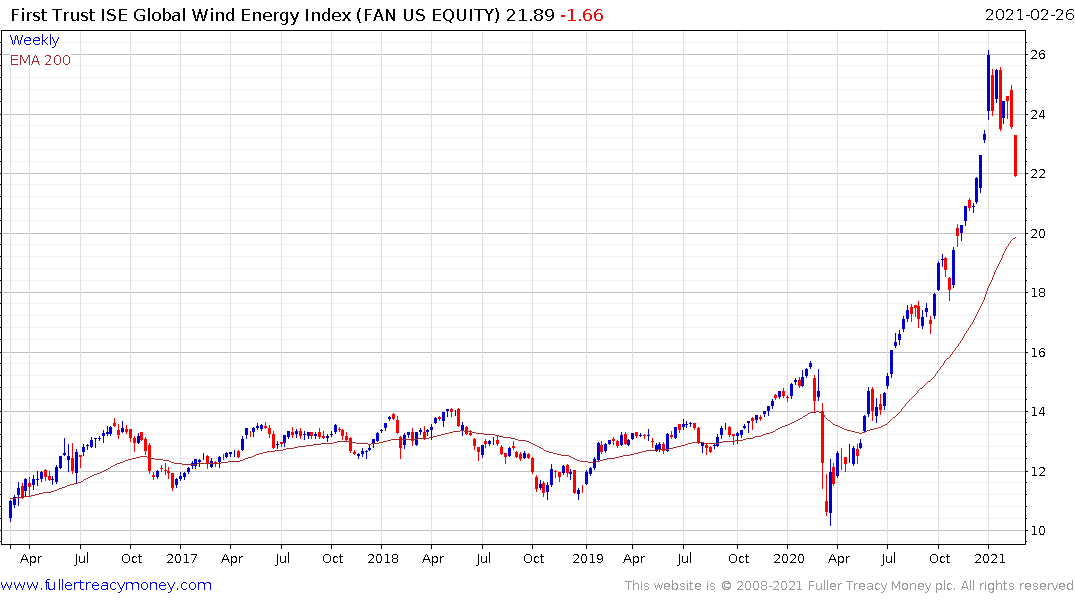 That suggests all we are seeing in the solar and wind sectors is a consolidation of recent powerful gains.