Shawn Bennett, deputy assistant secretary for oil and natural gas at the Department of Energy, said the U.S. was not concerned about competition. Growth projections for natural gas demand in India and other Asian countries are so high, and the need for supply diversification in Europe so acute that there’s little risk of a glut, he told Bloomberg. “Global demand for LNG is just going to grow,” he said.

The U.S. may be pushing back in more concrete ways. On September 30, the Department of the Treasury imposed sanctions on units of China’s Cosco Shipping Corp., over alleged breaches of U.S. sanctions against Iran. The move immediately hit the Yamal project’s LNG tanker routes because of Cosco’s share in one of the main shipping companies involved.

Still, for those who have been working in the Arctic for a long time, much of the geopolitical discussion sounds a little breathless. Last year, Russia’s Northern Sea Route carried 29 million tons of cargo, with projections rising to 90 million. The Suez Canal carries about 1 billion tons.

David and I predicted more than a decade ago that the USA would become energy independent that that represented a gamechanger for the energy sector that was completely underappreciated by markets. This chart suggests that reality, long promised, is now upon us. 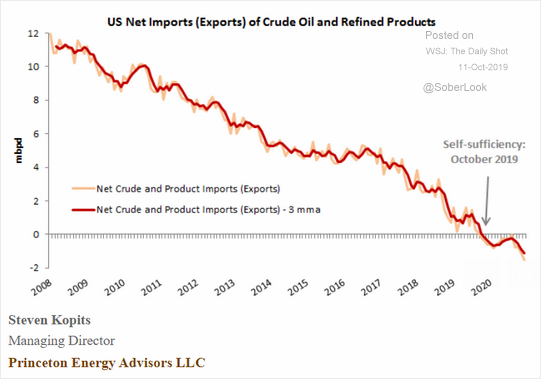 The biggest consumer turning into the biggest marginal supplier of what are still the world’s most economically vital commodities is a massive change that completely upends the geopolitical status quo. The USA might not want to have very high energy prices but it no longer has an interest in rock bottom prices either. At the same time, it is competing for export markets with countries it once bought oil and gas from. That means a completely different diplomatic playbook which we are only now starting to see evidence off. Simply put the USA now has different diplomatic priorities and policing other countries’ exports is not one of them.