Musings From The Oil Patch July 1st 2019 by Eoin Treacy

Growing gas production has also allowed buyers to worry less about having substantial volumes in storage to meet winter demand.  Therefore, buyers see little need to lift gas prices to encourage storage injections.  That dynamic has been demonstrated by the low level of storage we reached last year, and now how quickly we are rebuilding storage, while also meeting increased gas consumption from the power and export markets.

The recent gas production growth, which accelerated starting in 2016, appears to be slowing.  To some degree, it is a function of the Permian Basin crude oil pipeline capacity shortage, which has restricted associated natural gas output.  Will that change when the new oil pipelines begin operating later this year?  Only time will tell, but official forecasts call for a slowdown in the growth of gas production.  That means the bigger question for the natural gas market will be demand.

A recent webinar on the natural gas market and outlook through 2020 had two charts we found very interesting.  The first dealt with the significantly different gas storage picture in Europe.  Today, storage is well ahead of last year, which may have an impact on the amount of future liquefied natural gas (LNG) shipments.  So far, it appears to have had little impact, but the lack of clarity about output levels from the Dutch gas fields could also impact the market for U.S. LNG shipments to Europe.

The most interesting chart was explaining the firm’s gas price forecast compared to the NYMEX futures strip price.  The forecasters were able to frame their perspective about the upside and downside to their forecast by listing and quantifying the positive and negative factors for gas demand and supply.  We are not endorsing the forecast, but rather pointing out that there are a number of plusses and minuses that need to be considered when making a gas price forecast.

Natural gas is in a secular bear market. There is no shortage of it and a steep contango remains evident. That continues to exert downward pressure on the price. New sources of outsized demand are required to resolve this condition. Outsized economic growth, hydrogen fuel cells or shifting demand from coal are all candidates.  The downtrend suggests these sources of potential demand are not yet strong enough to influence the market. 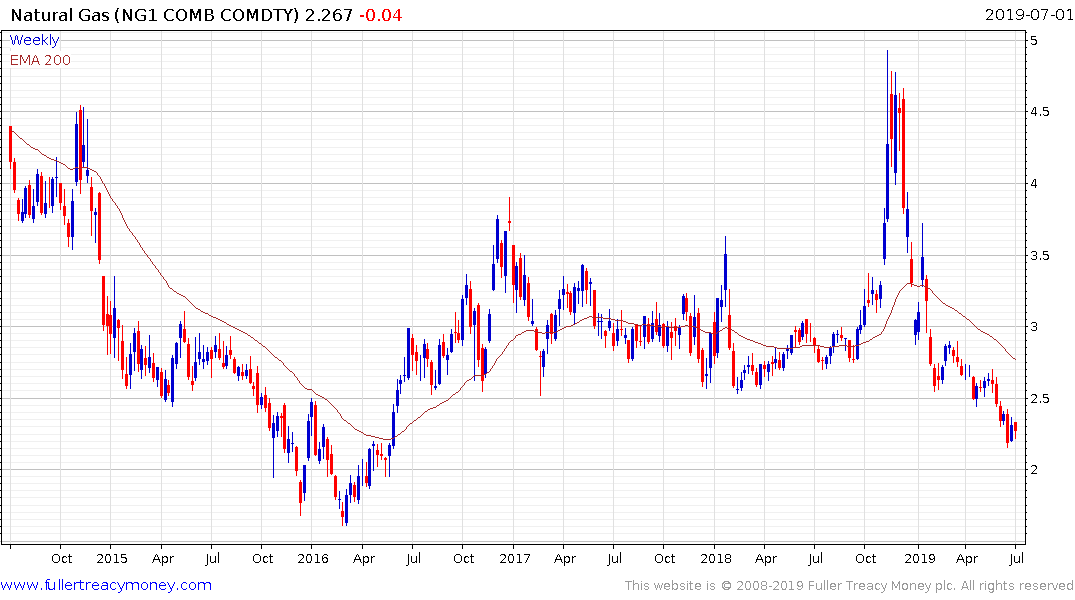