“Established models have supported this excellent result along with the latest additions to our product range, above all the new model variants of the all-electric Taycan,” Porsche sales chief Detlev von Platen said of the brand’s 36% first-quarter surge. “We can look back on a very positive start to the year.”

The Taycan, which Porsche recently flanked with a more spacious version, is a litmus test for the carmaker’s costly shift to electric vehicles. Boosting EV sales with Porsche will be key to maintaining healthy margins as the division is VW group’s biggest profit contributor by far.

Porsche’s total global deliveries rose to 71,986 vehicles in the first quarter, driven mainly by demand in China, its largest market. The compact Macan SUV was the brand’s best-selling model, ahead of the larger Cayenne. Porsche will launch a battery-powered version of the Macan next year that’s underpinned by a new platform for upscale electric cars co-developed with sister brand Audi.

Introducing new technology at a high price point before filtering it down to cheaper models in subsequent years has been the go-to model for automakers. Nothing has changed. The positive reception the Taycan has received will fortify the mood at Volkswagen that they have made the correct decision to bet on electric vehicles.

Every other automaker has also released plans to take on Tesla. They have finally realised that funding the growth of their competitors by buying their carbon credits is unsustainable. It really is a case of “if you can’t beat them, join them”. That’s not a comment on the sustainability of the decision but it is the reality of the market. 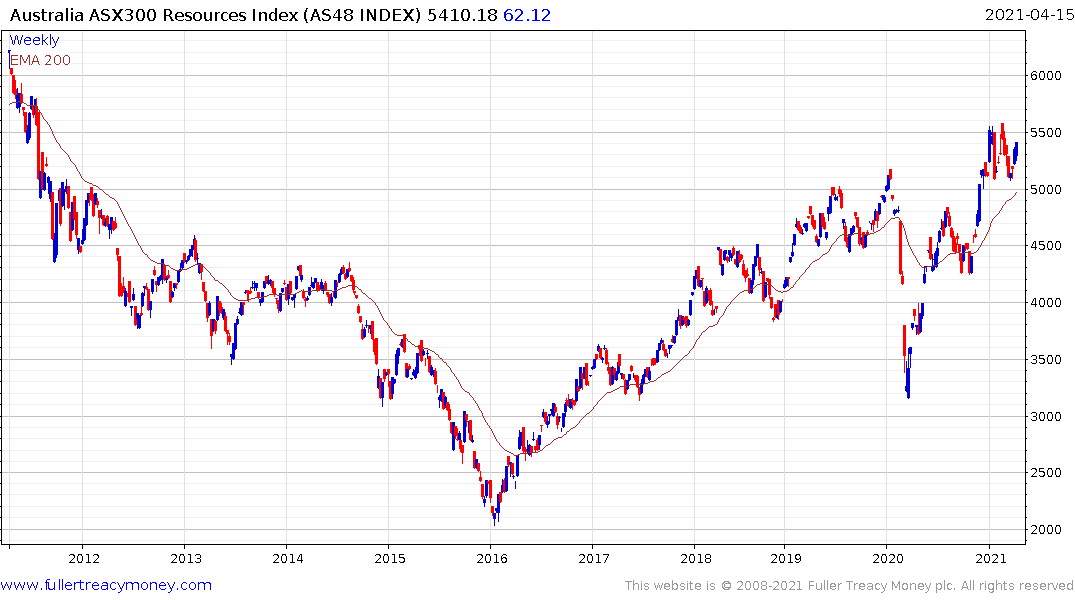 That transition is creating demand for industrial resources. Australia’s mining sector is a clear beneficiary. The S&P/ASX 300 Resources Index continues to consolidate above the 2020 peak and a sustained move below the trend mean would be required to begin to question medium-term scope for continued upside. 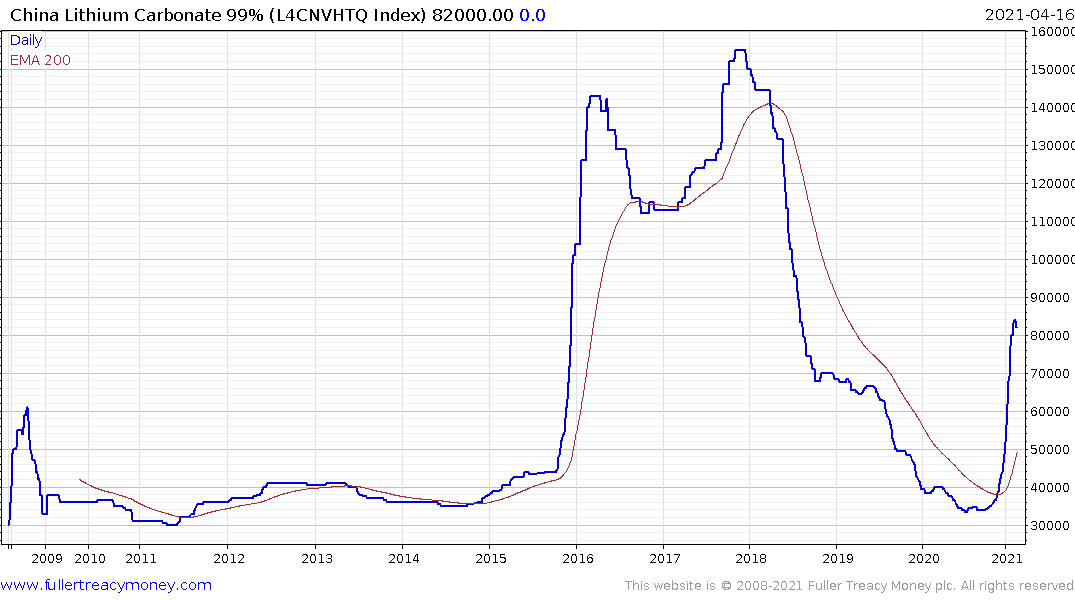 The lithium price has rebounded impressively over the last four months and paused for the first time this week. This article from mining.com focuses on Australia’s lithium mining companies. 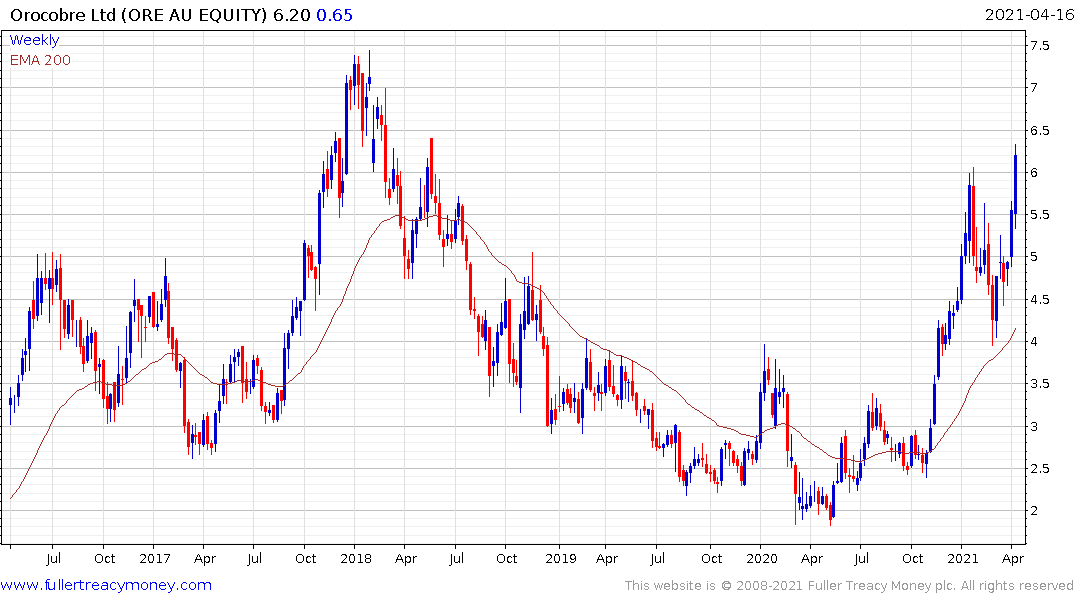 Orocobre is a pureplay on the sector and remains on a recovery trajectory. It rebounded impressively from the region of the trend mean and hit a new recovery high today. 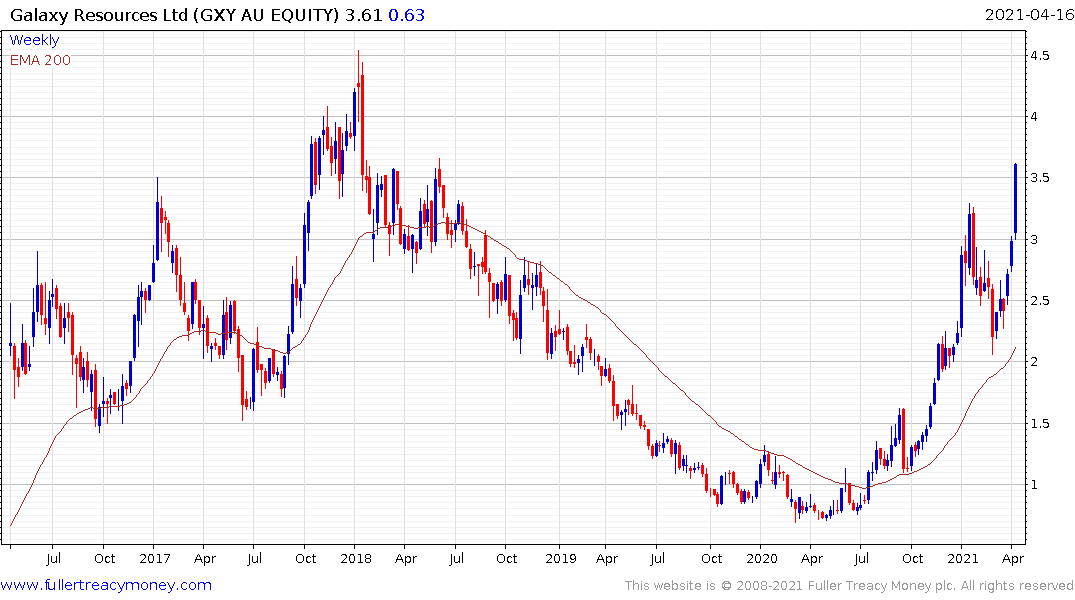 Galaxy Resources has a similar pattern and is developing a world class brine operation in the same area of Argentina as Orocobre. 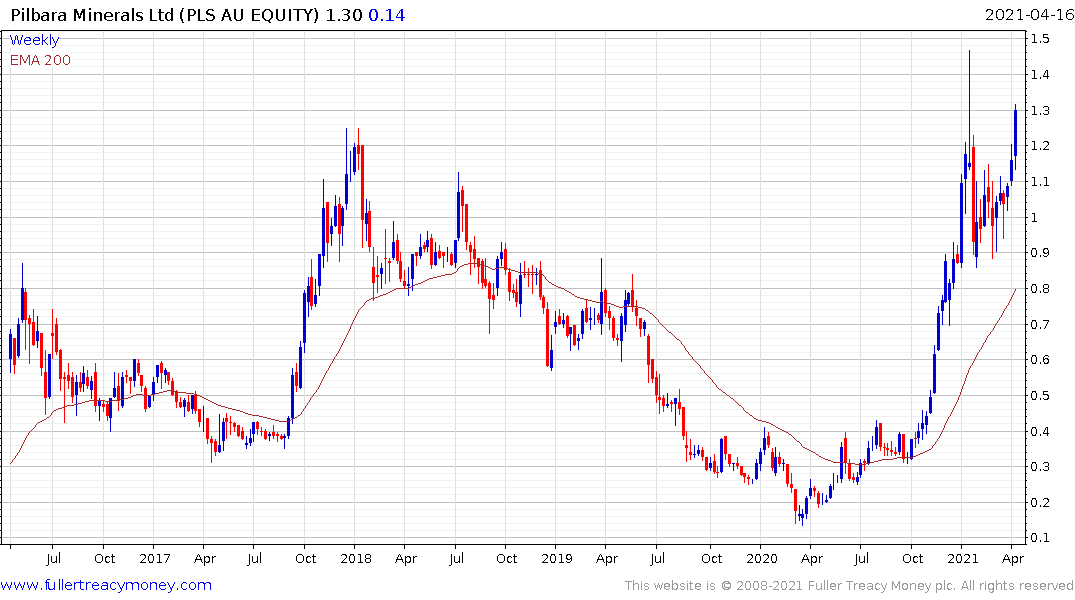 Pilbara Minerals took out its 2017 peak in January, consolidated in the region of the peak and broke upwards again this week. 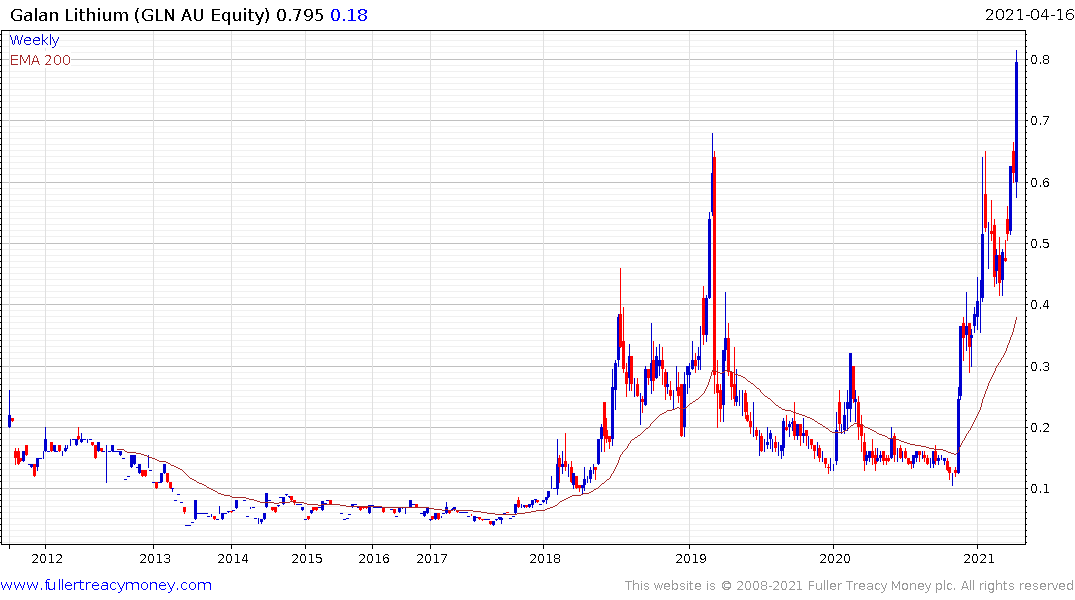 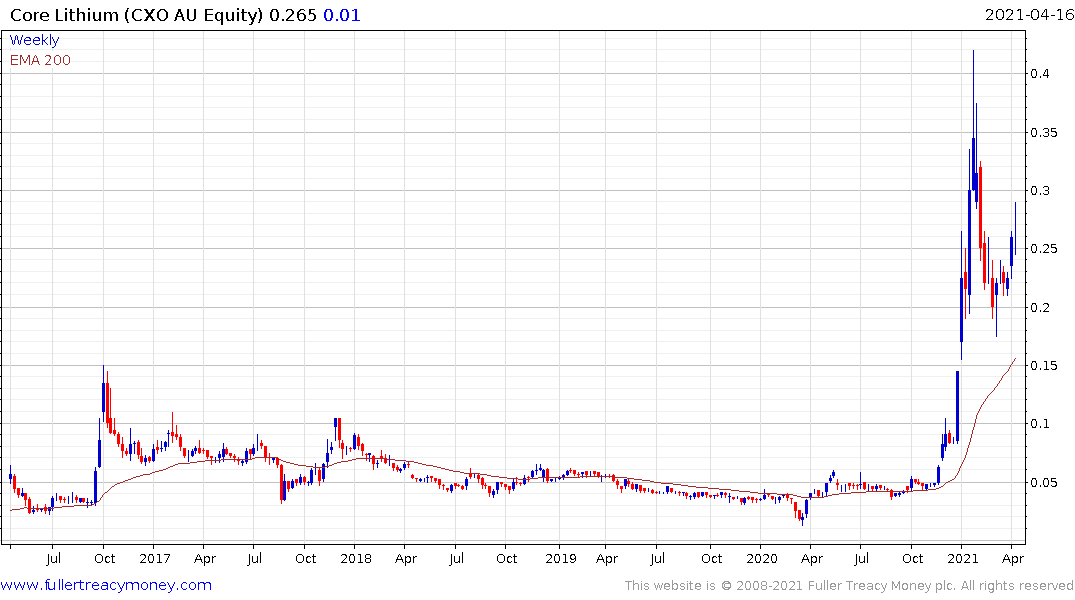 Core Lithium has already secured offtake agreements through its largest shareholder which will supply Tesla’s Chinese operations. The share has lagged of late; suggesting the good news may have already been priced in. 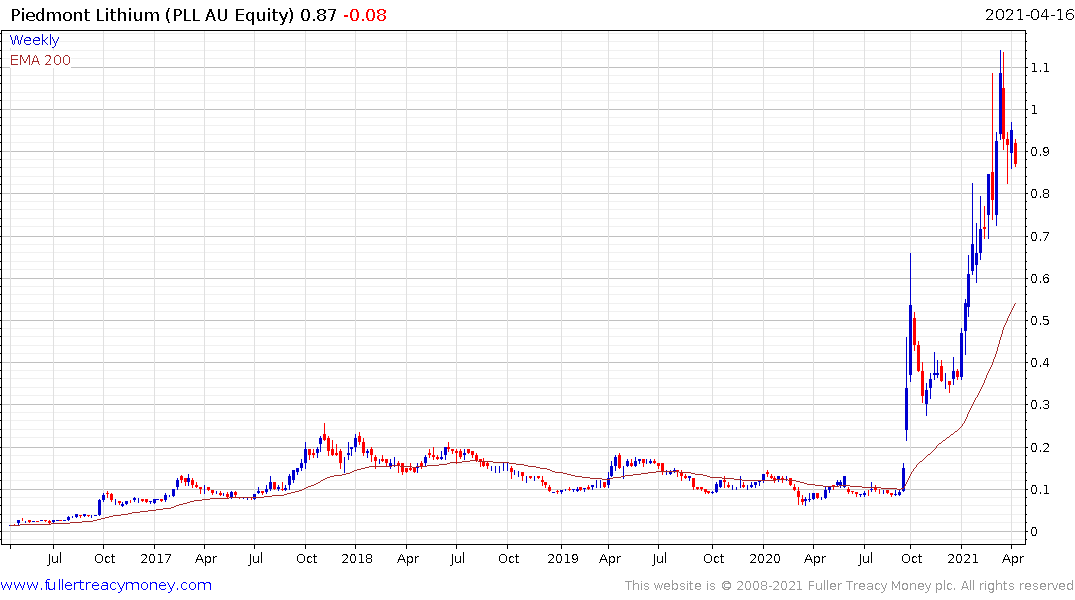 Piedmont Lithium accelerated to its recent peak and is now at least consolidating. 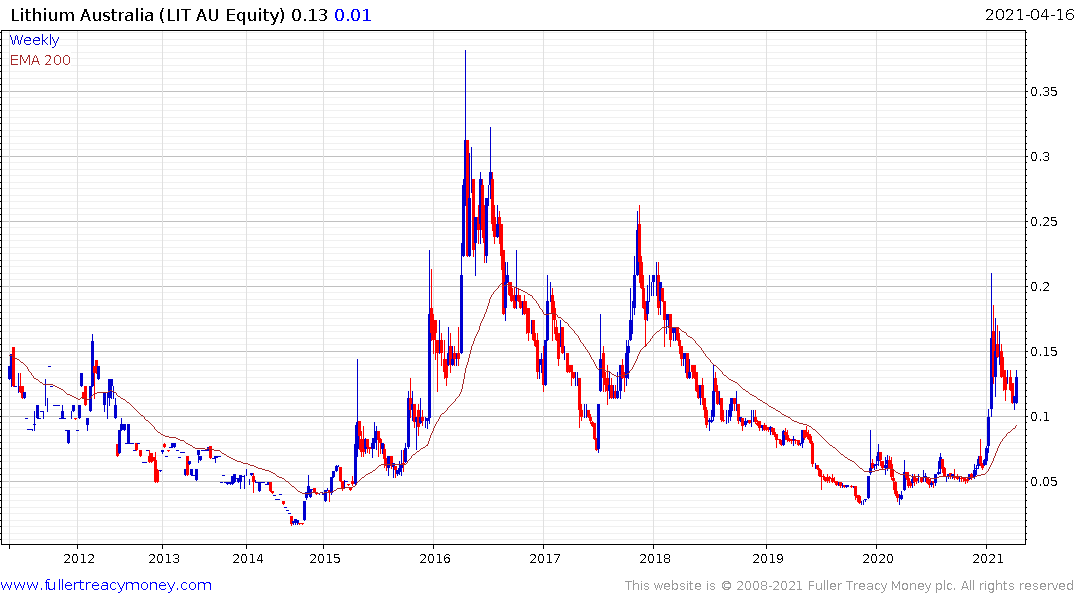 Meanwhile Lithium Australia is only now beginning to bounce from the region of the trend mean.