In 2020 the platinum market was in a deficit of -932 koz, the largest annual deficit on record albeit below the -1,202 koz deficit forecast in November 2020. This difference was due to Anglo American Platinum Converter Plant (ACP) Phase A being restarted in December 2020, three weeks earlier than expected. However, over the year, as a whole, lower supply due to COVID-19-related mine closures, ACP outages and reduced recycling far outweighed the pandemic-driven fall in demand from the automotive, jewellery and industrial sectors, which fall was partially offset by increased investment demand.

For 2021 the platinum market is forecast to remain in a deficit for the third consecutive year. The modest deficit of -60 koz results from a 17% increase in total supply and a 3% increase in total demand. Interestingly, total supply in 2021 will still be 3% lower than in 2019, with industrial, jewellery and automotive demand levels all above their respective levels in 2019.

Total platinum demand in 2020 was 7,738 koz, 7% (-569 koz) lower than in 2019. Automotive demand reduced by 17% (-474 koz) year-on-year, largely due to lower vehicle sales in the first half of the year, as measures to control the spread of COVID-19 resulted in vehicle factory and showroom closures. However, platinum automotive demand losses were cushioned by the impact of higher metal loadings on catalysts to meet tighter emissions regulations. Jewellery demand was similarly impacted in 2020, with volumes 13% (-279 koz) lower on a full-year basis despite quarter four demand returning to pre-pandemic levels. Industrial demand was 5% (-111 koz) lower, with strong glass sector demand largely compensating for weakness in all other industrial demand segments.

In 2020, weakness in automotive, jewellery and industrial demand was partly offset by strong investment demand, from bars and coins and ETFs, collectively up 24% (+295 koz) year-on-year. Heightened global risk drove investor demand for hard assets such as platinum during the first half of the year, further encouraged by the weak platinum price. Investment demand increased in line with the improving economic outlook in the second half of 2020 and was bolstered by NYMEX futures exchange physical metal stocks, that increased significantly to address the disconnect between the price of platinum futures and platinum. However, as the year progressed bar and coin demand moderated somewhat as the platinum price increased and stock shortages in North America were addressed. ETF holdings increased strongly over the year with growth in North America, Europe and Japan far exceeding declines in South Africa.

Platinum is more of an industrial metal than an investment vehicle. The demise of diesel engines resulted in a crash because catalytic converter demand evaporated. 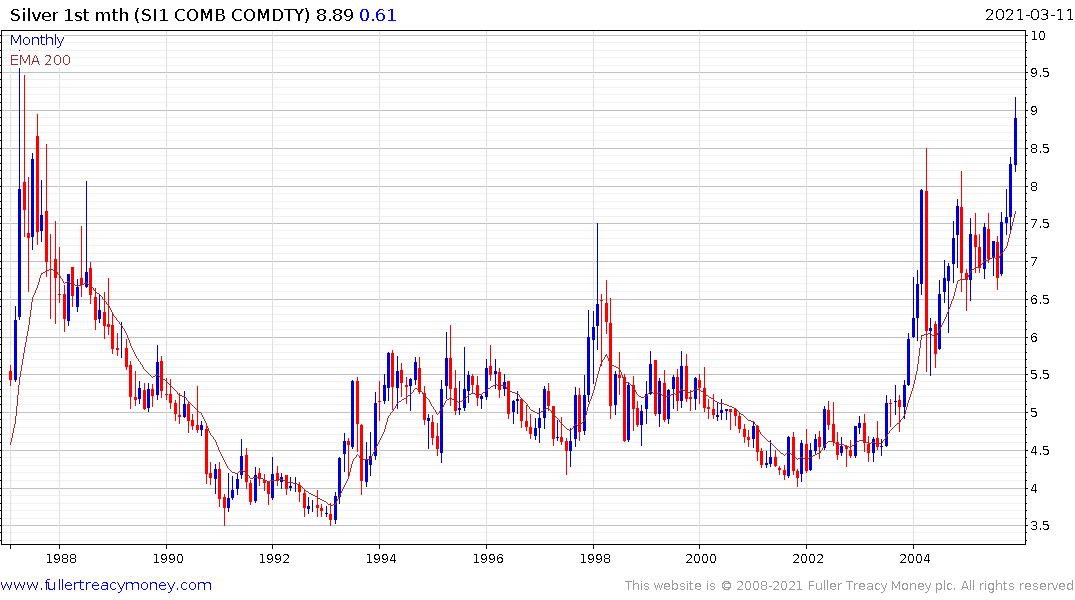 That is exactly what happened to silver when digital cameras eroded demand for photographic film. The price of silver halved between 1989 and 1991 as the first digital cameras arrived on the market. Without that major source of demand, the price drifted in a range for more than a decade. It did not breakout until a new source of demand appeared. It broke out in 2003 as emerging market investment demand heated up and Western investors worried about financial repression in the aftermath of the tech bust. 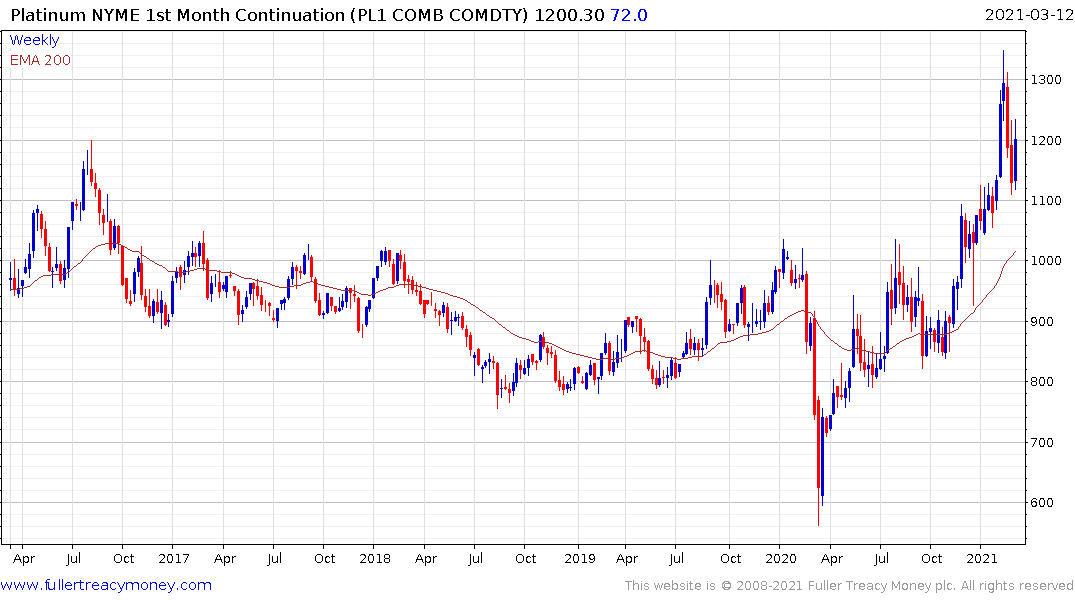 Platinum just about halved between 2014 and early 2016. It formed a base until December 2020 and broke out. Base formation completions happen for a reason. When a commodity does nothing for years sustaining higher prices requires less supply and/or more demand.

Supply is relatively constrained because of low mine grades and reliance on South Africa. Demand is boosted by platinum’s relative discount to the other precious metals and by a new source of demand as a catalyst for hydrogen fuel cells. 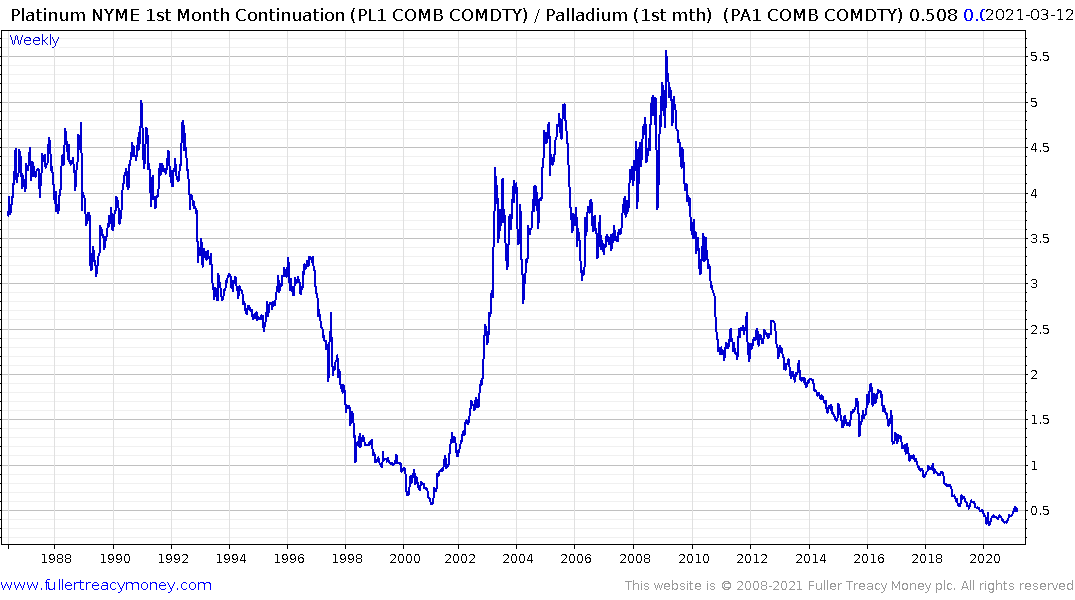 The platinum/palladium ratio has broken its downtrend. That suggests at least some appetite for playing the carbon transition theme by betting against demand for internal combustion engines and more demand for batteries and fuel cells. The reason I mention batteries is because palladium is a by-product of copper and nickel mining. More batteries mean more palladium production. 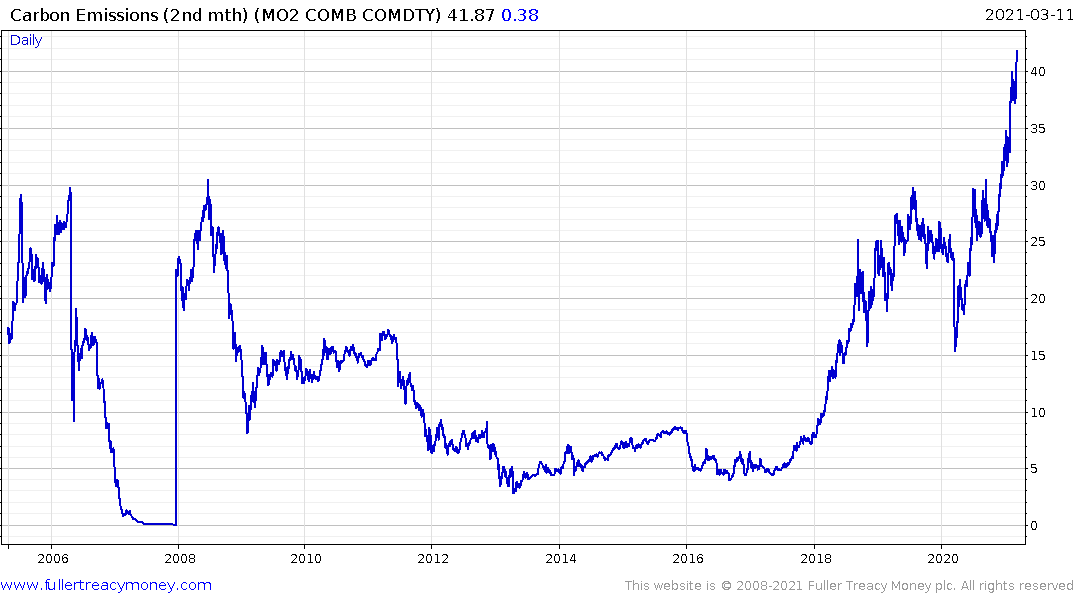 The continued political sponsorship of higher carbon credit prices is a key support for green hydrogen and by extension platinum. The price continues to firm from the $1100 and a sustained move back below $1000 would be required to question medium-term scope for continued upside. 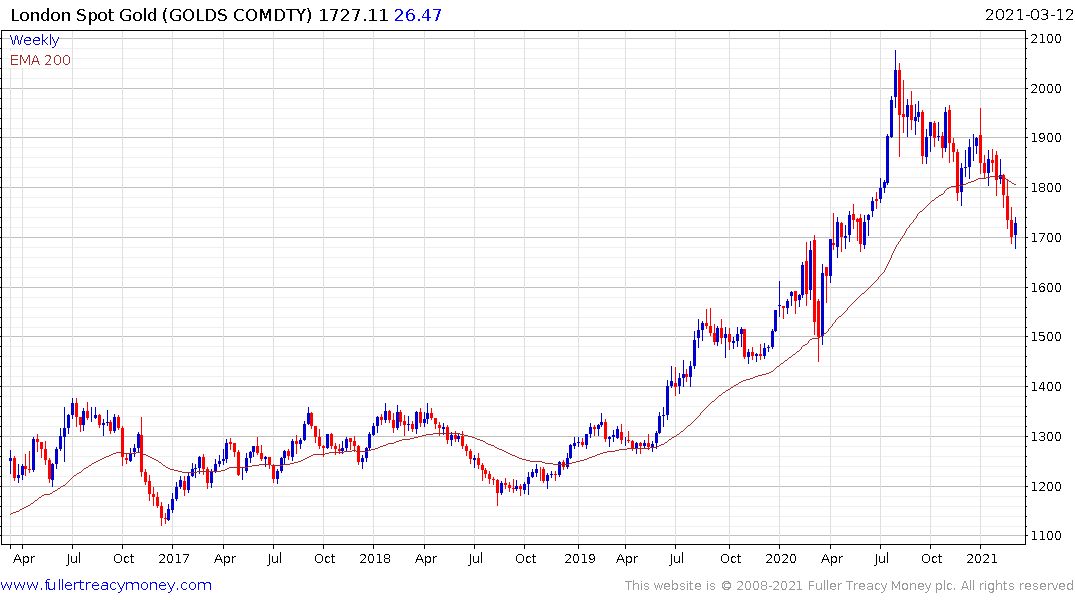 Turning to gold; the price is currently firming from the round $1700. The downtrend from the August peak has paused at $100 increments so we are due at least a $100 rebound. It will need to sustain a move above the trend mean to confirm a return to demand dominance. I remain of the view that the announcement of additional QE measures or yield curve control are likely to be the catalysts for the next up-leg to the gold price.