Outlook for 2019: The Game Has Changed
Comment of the Day

Outlook for 2019: The Game Has Changed by Eoin Treacy

First, we believe that the shift from monetary stimulus towards fiscal stimulus is – unquestionably – better for nominal GDP growth than it is for global capital markets performance. Simply stated, our thesis is that governments will now use fiscal tools rather than monetary tools to not only attempt to drive growth higher but also to repair some of the socioeconomic divide that has unfolded after the Global Financial Crisis (GFC). In our view, this shift in focus by the ‘Authorities’ towards more fiscal policy help and less monetary policy stimulus is a secular, not a cyclical one. It also represents a major reversal from what occurred during the last decade. Key to our thinking is that U.S. savers have now been asked to absorb at least an additional $360 billion in Federal Reserve balance sheet liquidity and around a $400 billion increase in the U.S. deficit at a time when other global central banks and other foreign investors are reducing their ownership of U.S. government bonds (Exhibit 5). If we are right, then it also means that bonds likely can’t be the shock absorbers that they have been in the past two decades; we view this as a big deal for all macro and asset allocation professionals, levered accounts in particular. The shift towards increased fiscal stimulus also dovetails well with two other mega themes that my colleague Ken Mehlman and I have been highlighting: the rise of nationalistic agendas over global ones as well as the long-term impact of demographics on mature economies such as Japan, Germany, and the United States.

Looking at the big picture, we feel strongly that the road ahead during the next few years will remain bumpy. Unlike the past 8-10 years, central bank liquidity has peaked, and as such, we are inclined to tilt more defensive in three areas we believe still need to mean revert: Momentum Stocks, Investment Grade Credit, and parts of Core Real Estate. That said, we also take a lot of comfort in the reality that 1) many asset classes have already been hit hard (Exhibit 3); and 2) our macro models suggest a slowdown, not economic Armageddon. Hence, we are comfortable with our decision to enter 2019 with a modest overweight to Public Equities and our sizeable overweight position to Actively Managed Opportunistic Credit.

The broad global adoption of fiscally stimulative policies is unlikely to be as coordinated as the monetary response to the credit crisis was. The big arbiters of how much liquidity is provided to the global economy and eventually the markets will be in which large countries adopt fiscal stimulus. Germany, China and Brazil are the big additional potential sources of stimulus so it is their political machinations that are most worth watching.

Considering the quantity of debt that needs to be issued and/or refinanced this year and next against a background where there is a dearth of willing buyers. It is logical to expect yields to trend higher. We certainly saw a meaningful rally in in Treasury prices until Christmas and that is now being unwound but the much bigger question is whether bonds can hold a rally outside a time of heightened markets stress. I have my doubts. 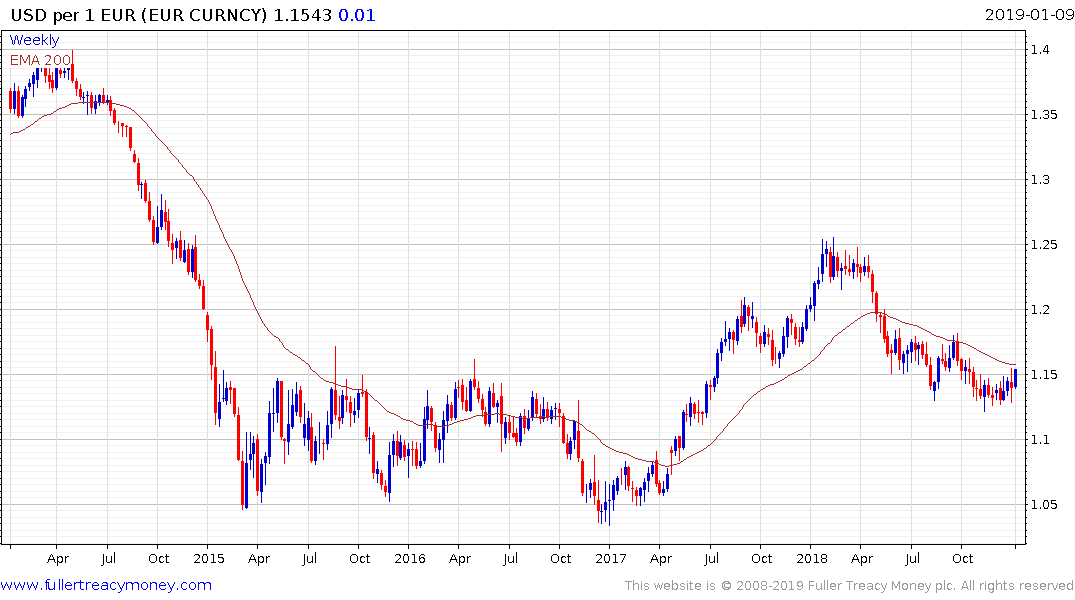 The Dollar may finally be succumbing to the bears as expectations of continued rate hikes are priced out. The Euro broke upwards to new 10-week highs today and is now testing the region of the trend mean. Upside follow through tomorrow would being to confirm a change of trend.

Slide 8 in the report detailing the difference between normal recessions and the extreme conditions of 2007 and 1929 is particularly informative. We generally see the stock market underperforming ahead of recession but it bottoms well before the recession ends. That suggests this is indeed the time to be developing a shopping list and looking at value over momentum.

If the Dollar is in fact turning that is likely to be particularly beneficial for emerging markets, particularly those with growth-minded administrations like India, Indonesia and Brazil. 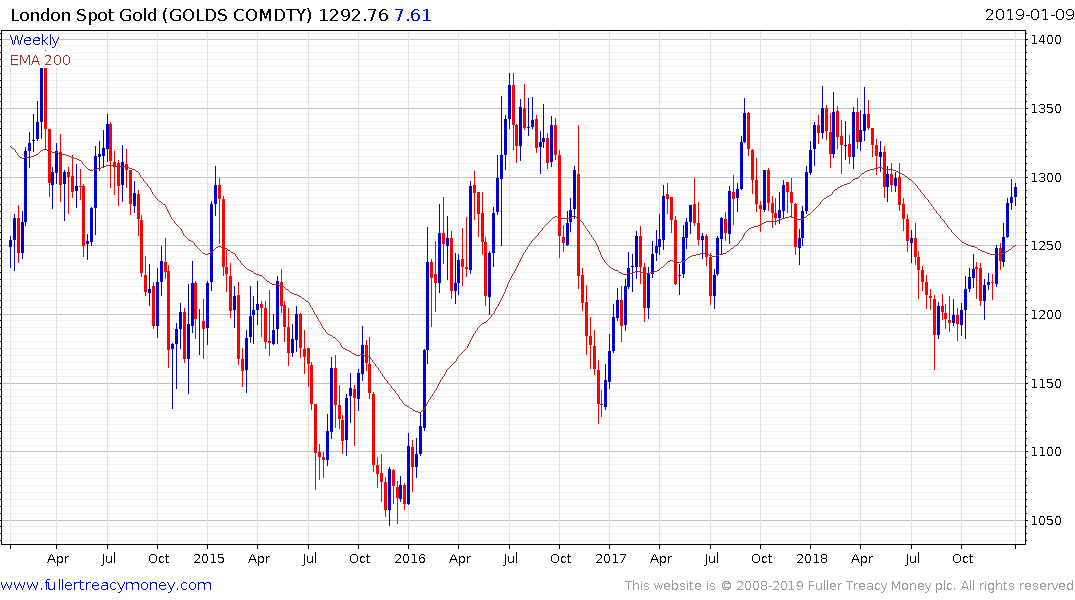 Gold and gold miners are also among the most under-owned assets right now and continue to firm.

I tuned into Jeff Gundlach’s Just Markets presentation yesterday and I will post the slides once I receive them. What I found particularly interesting is that while the tone of the message was quite different the broad strokes of caution about the health of the bond market, a desire to look for bargains, expectations for a weaker Dollar and outperformance of emerging markets and commodities were similar in both presentations. He was also wary about the broad stock market indices.