Out to pasture! by Eoin Treacy

Recently there has been discussion about yield curve control (YCC), and whether the FED will introduce a new policy on managing interest rates. Do not be fooled - this is a rather large red herring, as the debt is now too large in the US (as it is in most major economies) to raise rates without the increased interest cost having a debilitating effect on annual government budget figures.

There is no longer $ 1trn of outstanding US federal Bills - in June the outstanding amount surpassed $ 5trn. If rates rise from 0.2% to 2%, the ANNUAL interest cost just on that segment of the outstanding $19trn debt would rise from ~$ 8.5bn to ~$ 102bn. Naturally you would also need to also factor in the impact of higher interest rate costs on leveraged households and corporates.

This is the red herring - the size of the debt will force monetary policy. To think that the central bank can raise rates means ignoring the consequence from the debt stock. And this is the root of my lower for longer view, which is obviously influenced from years of studying Japan, and which is now almost completely priced in to rates markets. Remember that the YCC in Japan led to a severe reduction of the BOJ buying of JGBs - it just did not have to.

The Japanification of the developed world represents a massive challenge for investors in search of yield. 90% of all sovereign bonds have yields below 1% and the total of bonds with negative yields is back at $14 trillion and climbing.

This process is reaching its logical conclusion. Eventually all sovereign bonds will have compressed towards zero. The fact a rising number of emerging markets are now also engaging in quantitative easing is an additional signal that the compression of yields is moving further out the risk curve.

I agree it is impossible for central banks to raise rates without incurring a very substantial penalty in terms of interest payments. That leaves the global economy uniquely exposed to inflationary pressures. However, the bigger point for gold investors is this creates the same negative real interest environment that prevailed in the 1970s. 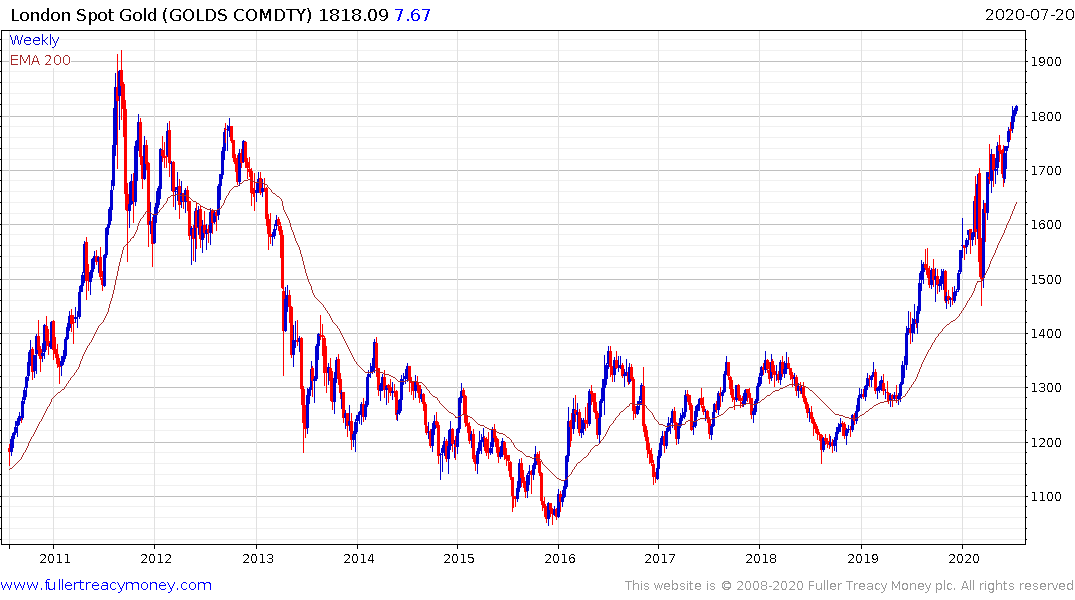 Gold continues to extend its break above $1800. With interest rates close to zero, gold’s status as a perpetual zero-coupon bond is bolstering its position as a hedging tool for long equity positions. 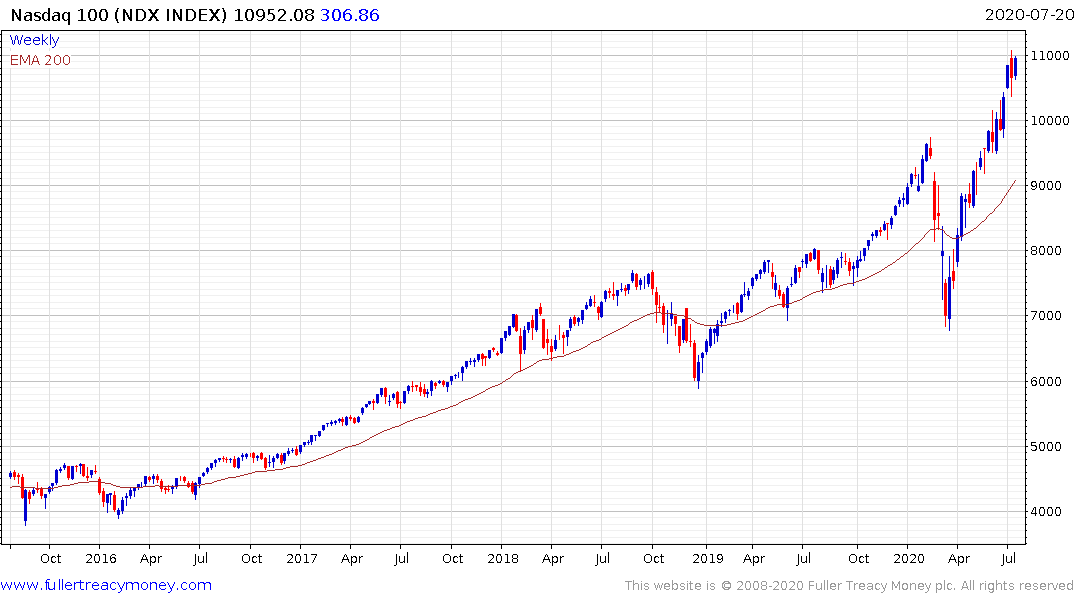 Extraordinarily low interest rates remain a tailwind for growth which accounts for the continued outperformance of the technology sector. 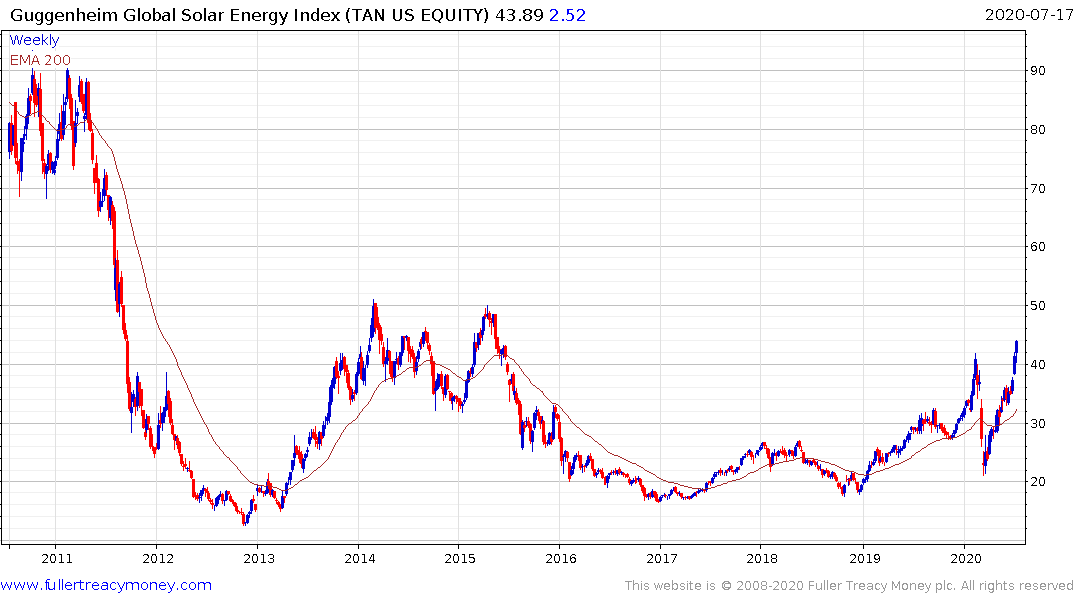 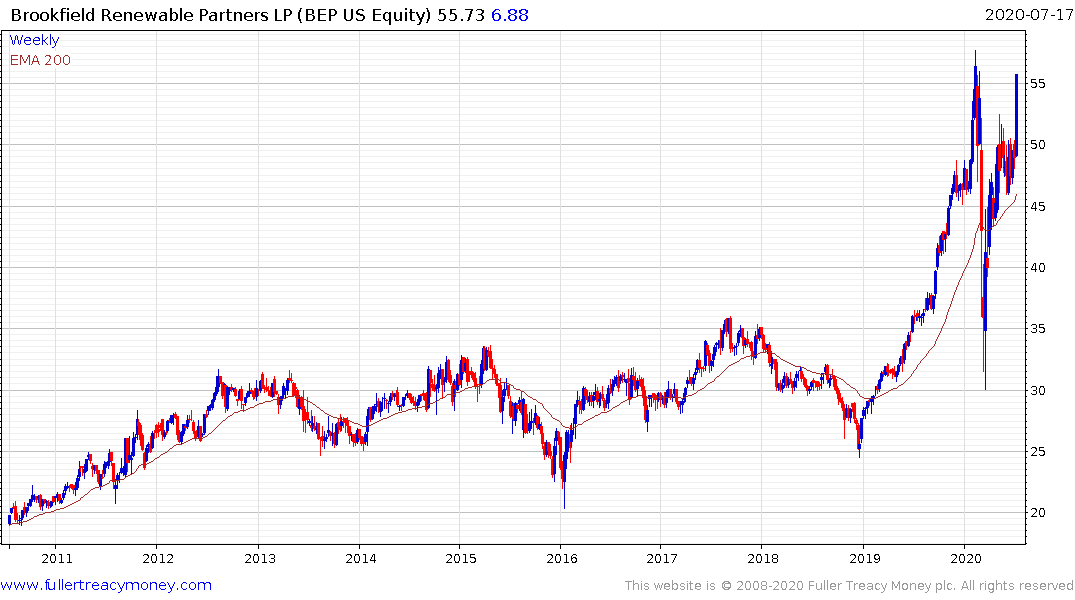 Meanwhile the resurgence of interest in renewable energy, where investors are attracted by utility-like yields is also a product of the low interest rate environment coupled with regulatory arbitrage.