In response, the Saudis have reduced output by far more than pledged under the terms of the deal, and the coalition’s overall implementation rate last month was 59% above target, according to a statement posted on its website on Tuesday. That means the alliance cut supplies by about 1.9 million barrels a day.

OPEC signaled that the deeper-than-anticipated cutbacks had been necessary because of the extreme upheaval in the global economy.

“This high level of overall conformity has offset uncertainty in the market due to ongoing economic-growth worries,” according to the statement from the Joint Ministerial Monitoring Committee, a body set up by OPEC and its allies to oversee implementation of their strategy.

“Along with healthy oil demand,” the supply restraints have “arrested global oil-inventories growth and should lead to significant draws in the second half of the year,” the committee said.

Brent Crude is flirting with $60 and WTI is testing the $55 area. OPEC and Russia need a higher price to meet their domestic obligations. Meanwhile shale producers need a higher price to justify continued drilling and to help meet their debt obligations. That suggests the $50 area for WTI is a big level for the US domestic onshore sector because they cannot justify supply growth below that level. Despite this competition between OPEC and the Permian oil is trading in backwardation out to two-year maturities. 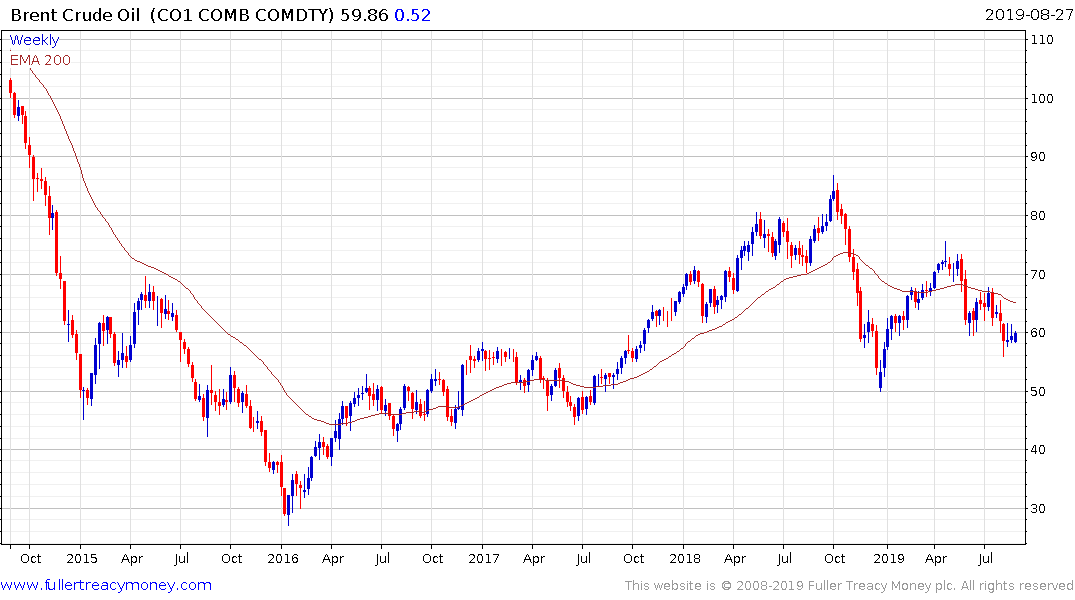 There is still a succession of lower rally highs that will need to be overcome if the price is to break the near-term sequence of lower rally highs. Higher oil prices are a late cycle phenomenon, so this is an important sector to monitor for a change of trend. 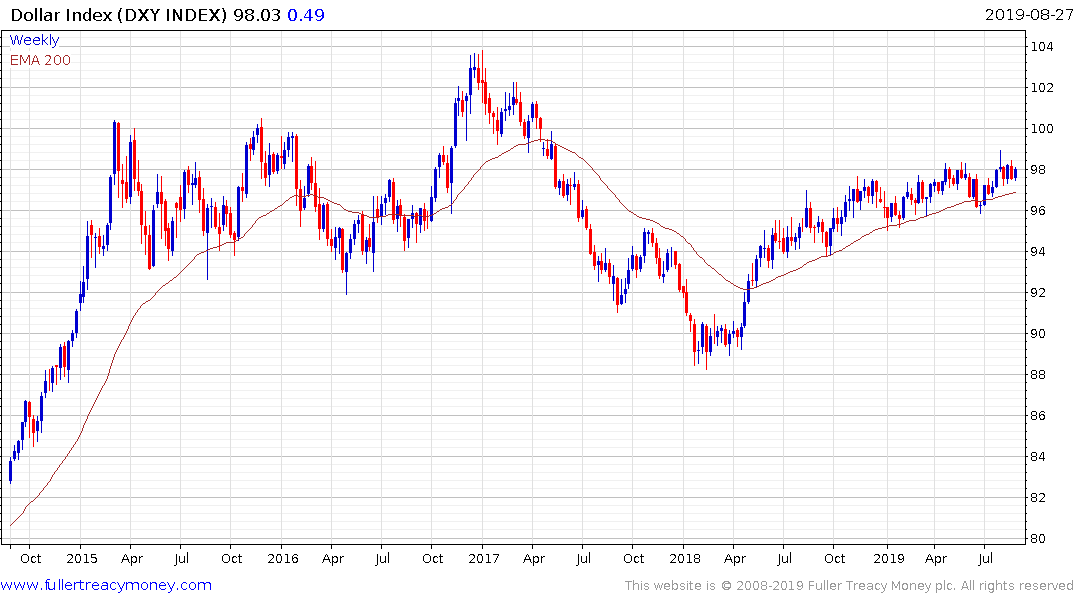 Despite some volatility over the last couple of months, the Dollar Index continues to hold its mild upward bias and that is helping to keep a lid on inflationary pressures. 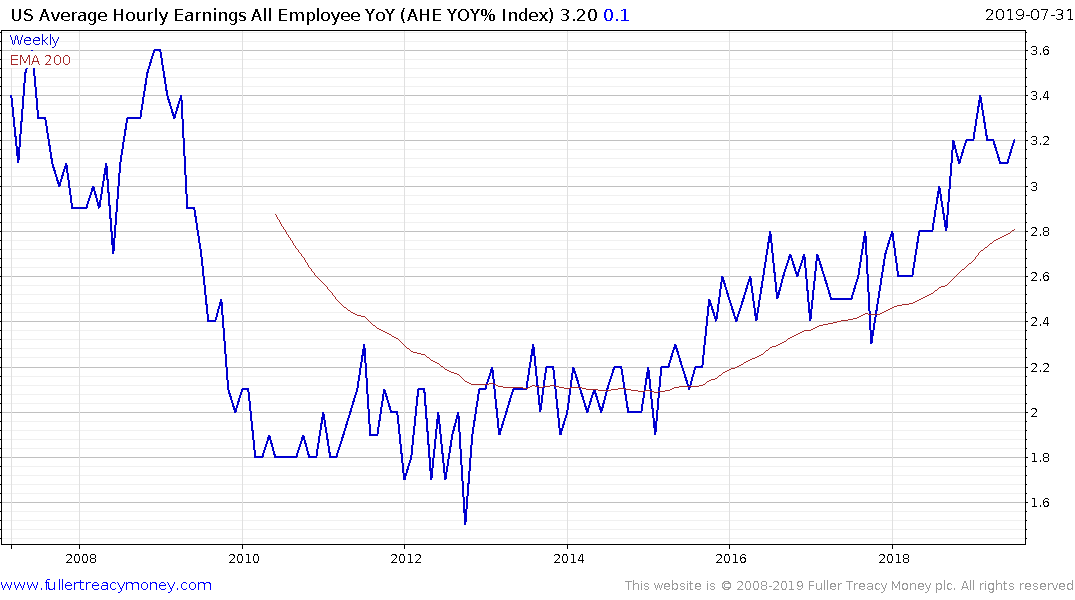 Average Hourly Earnings growth remains above 3% and will next be updated on September 6th. The rate peaked around 3.5% between 2007 and 2009 so weakness in the measure would support the deflationary case. 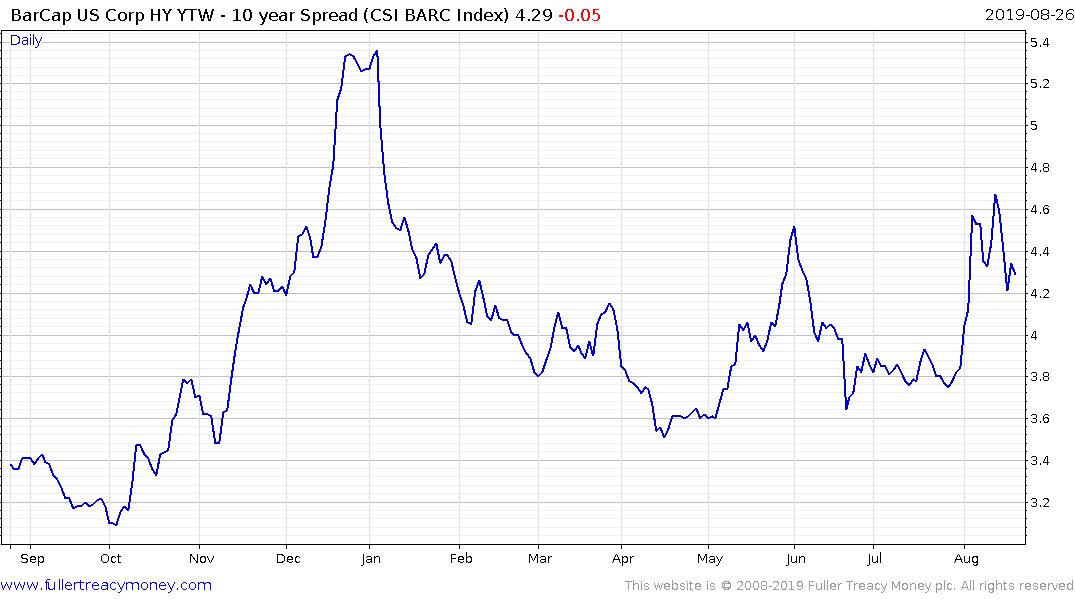 High yield spreads are still relatively well contained, despite energy high yield spreads breaking on the upside. Rising oil prices raise the spectre of inflation but low oil prices would put pressure on the junk bond market, so the longer oil prices remains stable the better for the global economy.